A woman was killed and two others, including a minor, were injured in an alleged airdrop operation carried out by the Coalition and Syrian Democratic Forces (SDF) in the Hawija neighborhood of Thiban town, east of Deir Ezzor, on October 28, 2022.

Nahr Media reported that a woman named Nadia Mustafa al-Ali was killed and two other people were injured when an SDF patrol raided the homes of the “Al-Askar” family in the Hawija neighborhood of Thiban town to arrest someone connected to smuggling operations. Clashes broke out between the SDF and the people of the houses, resulting in the casualties. According to Orient News, a minor was among those injured and the SDF arrested a number of people, taking them to al-Omar field base.

Local sources from Deir Ezzor governorate told Alaraby News that ““a woman was killed on Thursday/Friday night, and two other people were injured of varying degrees, in addition to the arrest of several people following a raid carried out by the SDF with the support of US helicopters of the coalition forces,” adding that this was an operation carried out by the SDF and the US Coalition.

@DeirEzzore added that the clashes were between the SDF/Coalition forces and people who smuggle oil cross the Euphrates River.

Orient News pointed out that this operation was part of an increase of operations carried out by the Coalition and SDF, with the majority of them occurring in Deir Ezzor

The local time of the incident is unknown.

Reports of the incident mention the Al Hawija (الحويجة) neighbourhood, reportedly within the town of Thiban (ذيبان), for which the generic coordinates are: 35.00502, 40.513045. Due to limited satellite imagery and information available to Airwars, we were unable to verify the location further.

These maps are the first in a series of visualisations Airwars is presenting ahead of a new political declaration that calls on states to better protect civilians from the use of explosive weapons in populated areas.

By matching neighbourhood population density – which also usually coincides with high levels of civilian infrastructure – with Airwars’ archive of civilian harm, we demonstrate the deadly human toll and the impact of urban warfare in cities and towns.

During the Battle of Mosul, the US-led Coalition used over 29,000 bombs, missiles and rockets on the city to help defeat ISIS. Airwars records of civilian harm indicate that at least 5,680 civilians were reported killed – though some casualty estimates reach over 9,000.

Airwars has documented this profoundly troubling trend, time and again, where modern warfare is increasingly taking place in urban areas. 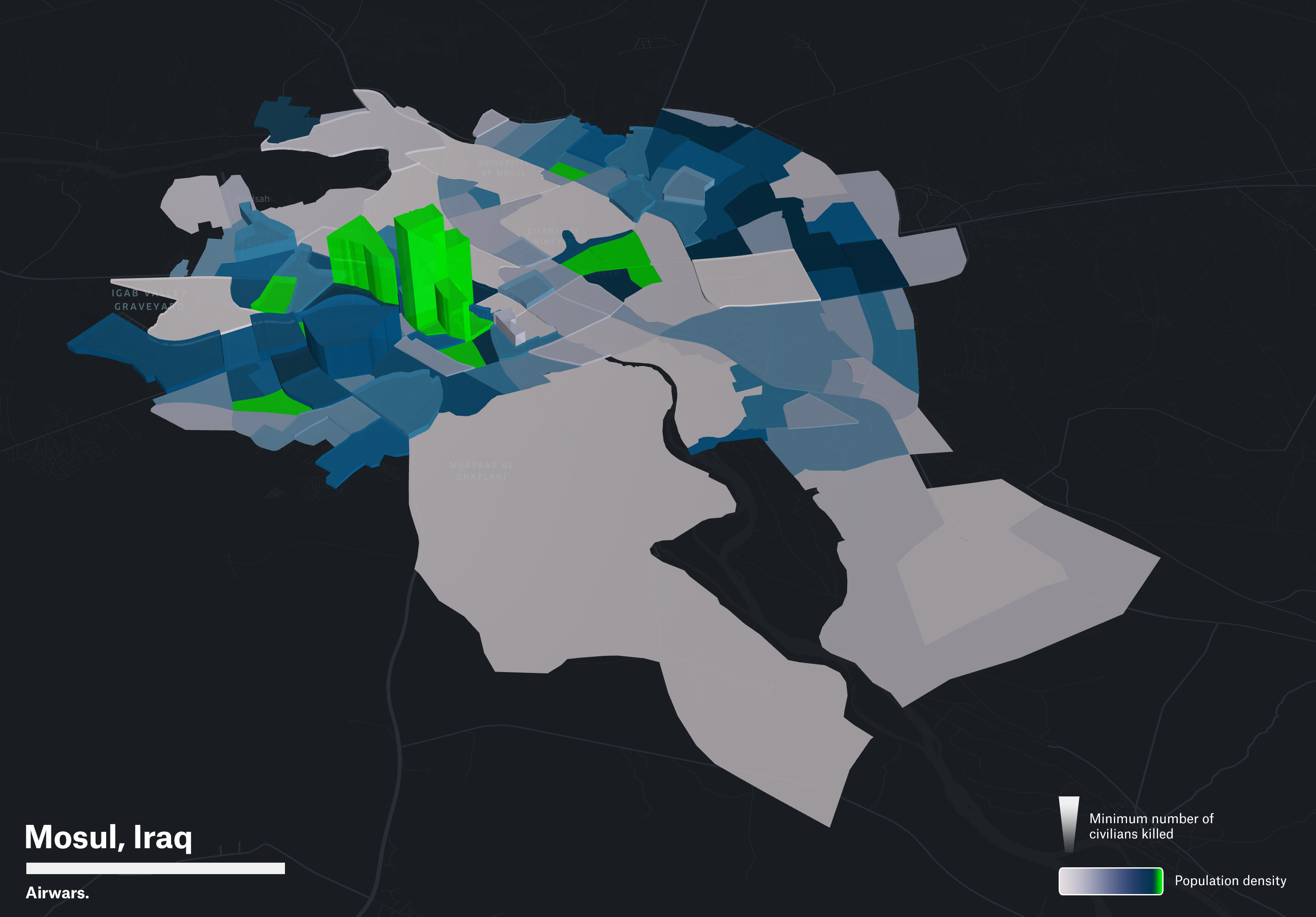 Map 1: This map of Mosul shows the devastating and deadly effects of heavy fighting in highly urbanised and populated neighbourhoods - between 2016 - 2017. The map splits Mosul up into local neighbourhoods - the taller the neighbourhood, the greater the number of casualties. Areas with the highest population density are indicated in green. As the map shows - the higher the density, the more casualties were recorded. The most number of civilians were alleged killed in Sheikh Fathi neighbourhood, where at least 1,079 civilian deaths were recorded. Population density data according to Central Statistics Organisation (COSIT), Iraq, August, 2016. Civilian casualty data presents minimum estimates across all civilian harm allegations recorded by Airwars. 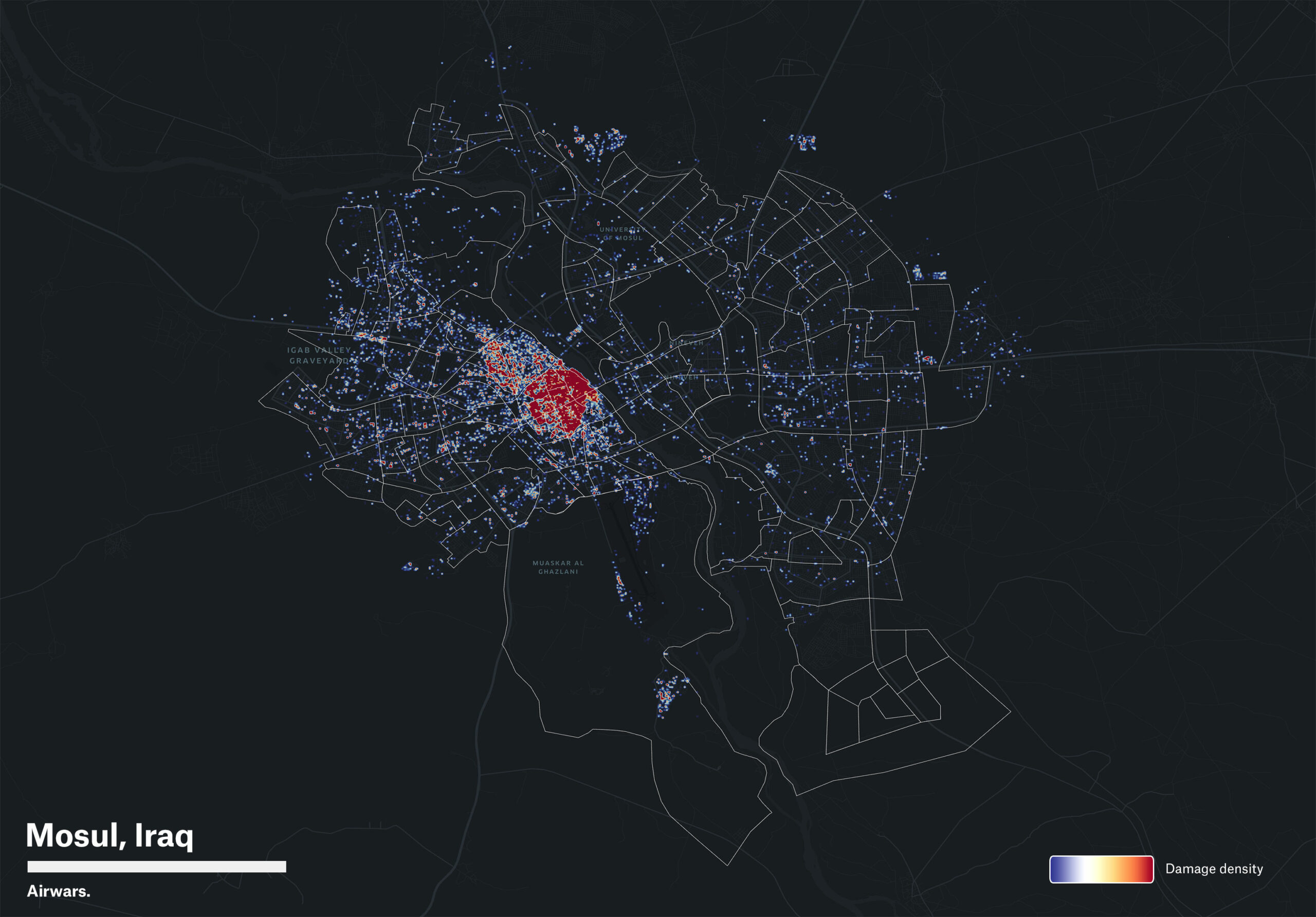 Map 2: This heatmap shows evidence of building damage during the Battle of Mosul (2016 - 2017) as recorded by UNOSAT from 2017. Building damage refers to substantial structural damage seen from satellite imagery over the period of the conflict. According to city officials, in some parts of the city 80 percent of buildings were destroyed. In the recently published RAND Report, Understanding Civilian Harm in Raqqa and Its Implications for Future Conflicts, RAND estimates that the ratio of buildings destroyed or damaged in Mosul to civilians killed was 1:1.

Royal Air Force aircraft have continued to conduct armed reconnaissance patrols against Daesh terrorists.  On Monday 10 October, a Reaper remotely piloted aircraft, armed with Hellfire missiles, tracked and, when it was safe to do so without posing a risk to civilians, successfully engaged one such terrorist who was on a motorcycle in northern Syria, near Hamman At Turkumen.