This is the latest visualisation in our series ‘mapping urban warfare‘, where we explore how explosive weapons affect civilians in populated areas – in line with a new political declaration restricting their use, signed by over 80 states.

Spotlight on the Gaza Strip

Produced in partnership with the Conflict and Environment Observatory (CEOBS), the map below explores the 11-day conflict in the Gaza Strip in May 2021. It includes data on civilian fatalities, collected and geolocated by Airwars, together with data on damage to critical water infrastructure – including ground measurement results from the UN Water Sanitation and Hygiene Cluster, satellite imagery, and local social media reporting. We use this as an indicator of the reverberating effects of conflict.

The images, geolocated by CEOBS, capture the outflow of untreated sewage into streets, inland lakes and the Mediterranean Sea. This was further exacerbated by damage to power infrastructure and fuel shortages, which were reported to have halted the operation of the undamaged wastewater treatment plants. Six months after the cessation of hostilities, temporary fixes to provide a minimum service were still incomplete, reportedly owing to a ban on imports of raw materials into the Gaza Strip.

As recently as November 2022, flash flooding was also identified in areas where wastewater infrastructure had been damaged in May 2021.

For detailed joint analysis from Airwars and CEOBS on the interconnected environmental factors relating to the conflict in the Gaza Strip, visit the CEOBS website here. 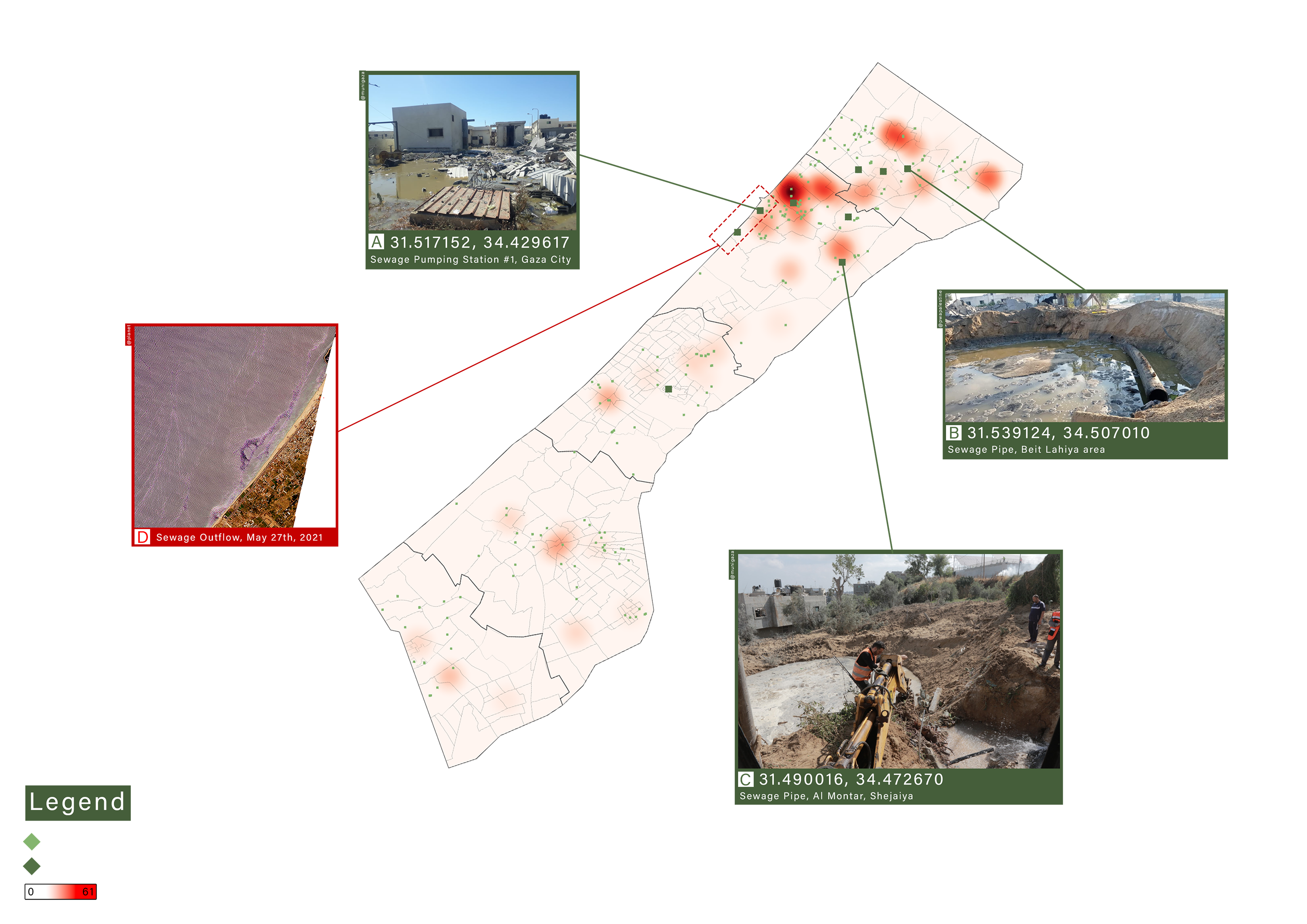 Static Gaza map showing (i) Green dots : WASH infrastructures either partially or completely destroyed by the conflict escalation. Of the 290 water infrastructure ‘objects’ damaged in the May 2021 escalation, 109 were linked to wastewater (such as wastewater treatment plants and sewage pipes). Data recorded in "Gaza WASH sector damage assessment - June 2021" by WASH Cluster - oPt. (ii) A heatmap of May 2021 civilian casualties based on Airwars data. The area coloured in the darkest red shows Northern Rimal neighbourhood, where the highest number of civilian casualty incidents occurred, cumulating at least 61 civilians likely killed, according to Airwars estimates. For an in-depth analysis of urban strikes, see our previous report "Why did they bomb us? Urban civilian harm in Gaza, Syria, and Israel from explosive weapons use" as well as our interactive map identifying civilian harm events. (iii) An inset imagery to several locations geolocated by CEOBS and satellite imagery of sewage discharges into the Mediterranean Sea by Planet.