CENTCOM has conceded 14 additional civilian deaths from US military actions in the war against so-called Islamic State, in both Iraq and Syria. The admission brings to 55 the official tally of civilian dead, from more than 10,700 declared US airstrikes.

The newly-admitted deaths relate to six events between July 2015 and late April 2016. Public reports suggest the toll from these incidents could be as high as 27 civilians killed – including eight children.

“We deeply regret the unintentional loss of life and injuries resulting from our airstrikes and express our sympathies to those affected“, CENTCOM noted in a statement issued to media.

Contrasting starkly with US claims of 55 deaths, Airwars estimates that at least 1,521 to 2,308 non-combatants have likely died in Coalition strikes across Iraq and Syria since August 2014. Iraq Body Count says up to 2,554 civilians have been killed by the US and its allies in Iraq alone. And the Syrian Observatory for Human Rights reports that 594 civilians had died up to July 23rd in the Coalition’s 22-month Syria campaign.

None of the US’s 12 partners in the Coalition has so far declared any civilian casualties from their own actions – despite more than 3,200 additional airstrikes between them.

Five of the newly declared US incidents took place during 2016 in Iraq. For February 15th, CENTCOM now says that “near Al Qaim, Iraq, during a strike on an ISIL staging area, it is assessed that three civilians were killed.” Reports from the time said up to nine non-combatants were killed in that attack.

The following day on February 16th, CENTCOM reports that “in Ar Rayhaniyah, Iraq near Mosul, during a strike on an ISIL vehicle, it is assessed that one person was injured along the side of the road.” No public reports are known for this event, suggesting that CENTCOM’s own post-strike assessment succesfully picked up the civilian casualty.

On April 5th the US carried out an airstrike on an ‘ISIL financial storage facility’ in Mosul which it now confirms killed three civilians. We know much more about this thanks to comments from a US commander shortly after the event.

General Peter Gersten, deputy chief of operations and intelligence for the Coalition, revealed on April 26th that US aircraft had detonated a Hellfire missile above the house as a ‘warning’ to a woman and her children known to be inside.

“We went as far as actually to put a Hellfire on top of the building and air burst it so it wouldn’t destroy the building, simply knock on the roof to ensure that she and the children were out of the building. And then we proceeded with our operations.”

But the tactic failed according to Gersten: “As much as we tried to do exactly what we wanted to do and minimize civilian casualties, post-weapons release, she actually ran back into the building. That’s a — we watched, very difficult for us to watch.”

On April 26, 2016 in Sharqat near Qayyarah, the US attacked an ISIL checkpoint. According to CENTCOM “it is [now] assessed that one civilian was killed when a motorcycle unexpectedly appeared in the target area after the US aircraft had already released its weapon.”

That attack on a checkpoint near the Jumeila bridge was reported at the time – though there was no mention of civilian casualties.

In the final Iraqi event on April 29th, the succesful US targeted killing of the Australian Neil Prakash, ‘an ISIL external operations facilitator’ also “struck three civilians on the road and one civilian located on an adjacent compound.”

One of the four civilians killed in the airstrike that day has been named by local sources as Dr Ziad Kalaf,  a university teacher. 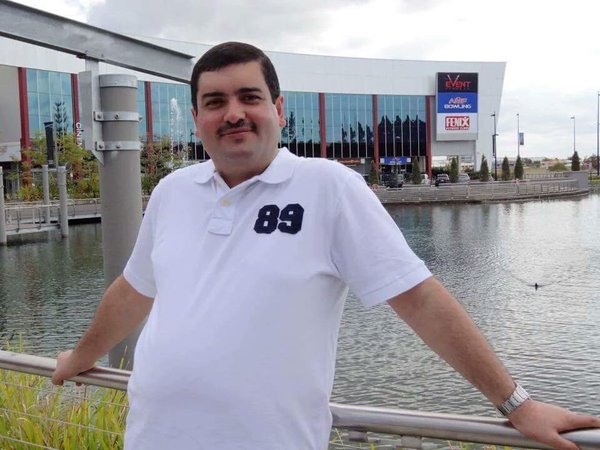 Dr Ziad Kalaf, accidentally killed in a US targeted killing operation in Mosul on April 29th 2016

CENTCOM has also reassessed a Syrian incident near Idlib dating back to July 28th 2015, noting that “during a strike on a senior Khorasan Group advisor, it is assessed that three civilians were killed and one vehicle destroyed when their vehicle appeared in the target area after the Coalition aircraft released its weapon.”

Alongside the Coalition’s war against ISIL, the US is also conducting a unilateral campaign against elements of the Al Qaeda-linked al Nusra Front – the so-called Khorasan Group. That July 28th strike was almost certainly carried out by US Specal Forces.

The US may be under-estimating the number of people it killed that day. The Syrian Network for Human Rights concluded in its own investigation that at least eight named civilians died at Kafr Hind – six of them children – after the attack ignited nearby gasoline containers. 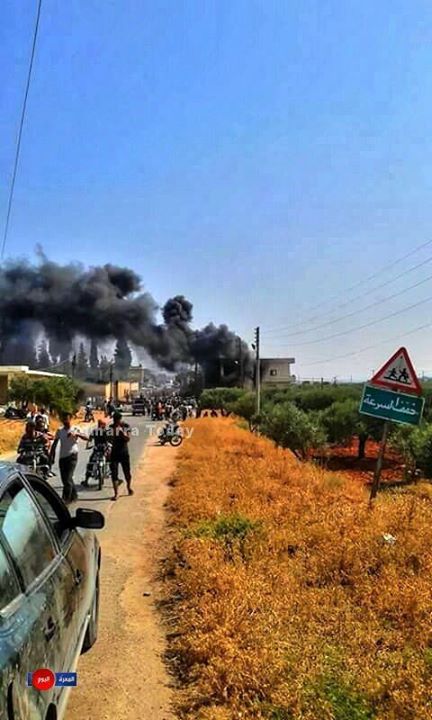 In related news the US has also announced a formal investigation into a confirmed July 19th Coalition airstrike at Tokhar, which public reports suggest killed at least 78 named civilians. Tokhar may be the single worst civilian fatality event in the Coalition’s two year air war.

Chief Coalition spokesman Colonel Chris Garver told Pentagon reporters on July 27th that a credibility assessment had been completed into Tokhar “and the result was that the information available was credible enough to warrant formal investigation, which we have initiated.”

Garver also disclosed that an additional event was being looked at: “The second allegation is from July 23rd of an alleged strike in the village of Al Nawaja, which is east of Manbij. That credibility assessment is still ongoing.” Between 10 and 22 civilians are reported to have died at al Nawaja in a ‘Coalition strike’, during a fierce ground battle between US proxies the Syrian Defence Force and so-called Islamic State.

The reported incidents at al Nawaja and Tokhar are just two of more than 50 alleged civilian casualty events tracked by Airwars in and around Manbij since an assault on the city began more than two months ago. CENTCOM officials are still refusing to disclose how many of these claimed incidents have so far been assessed for potential civilian casualties.

Airwars tracking shows that July is by far the worst single month for reported civilian deaths from Coalition strikes since the Syrian air campaign began in September 2014. Almost all of the alleged deaths reportedly occured in and around Manbij. 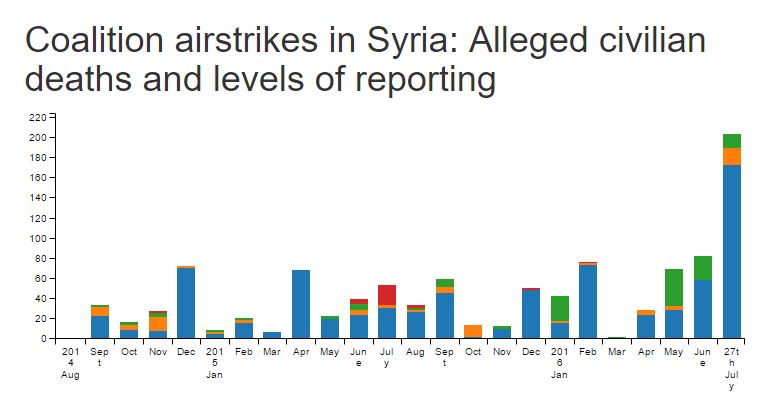 Reported civilian casualties from Coalition airstrikes in Syria have tripled in July, according to Airwars monitoring

▲ A US targeted strike on an Al Qaeda-linkled commander on July 28th 2015 is now admitted to have killed at least three civilians. Credible reports say as many as 10 actually died (Picture via Syrian Network for Human Rights)