A major Coalition-backed campaign to liberate the ISIL-occupied northern Syrian town of Manbij and surrounding villages has led to the deaths of hundreds of civilians, according to local reports.

But at least 70,000 non-combatants remain trapped within Manbij – caught between US airstrikes, advancing SAC forces and ISIL snipers. Water and food is said to be running low following the two-month siege.

“There are corpses on the streets and under the rubble that people are not able to remove,” Free Manbij Media Centre told Airwars on July 19th. “The numbers of those killed is between 500 and 700 martyrs according to estimates, the majority of them a result of Coalition planes bombing.” The local Manbij Coordination Committee placed the overall number of civilian deaths lower, at 368.

Airwars’ own estimate – based on hundreds of reports from local journalists, media activists, rebel groups and casualty monitors – suggests at least 190 civilians may so far have died in Coalition strikes in and around Manbij since May 31st.

We're tracking the worst ever week of alleged Coalition civilian casualties in 2 years of war – almost all at Manbij https://t.co/aMO0BPXjfi

Local monitors describe a desperate situation. The Manbij Agency for Documentation – a group trying to track civilians killed in the fighting – has given its own harrowing account of life under siege: “The smell of decomposing bodies fills the streets, as residents are unable to leave their homes for fear of snipers from both sides. Many of the civilians’ bodies are still stuck under the rubble of houses shelled by Coalition aircraft. Some of them are alive and others are dead.”

Airwars tracking indicates the situation is worsening. The period of July 11th-18th saw the greatest number of claimed Coalition civilian casualty events in two years of war against ISIL – with 14 of 15 alleged incidents taking place in or around Manbij.

In the latest reported event, at least 56 civilians from multiple families died in alleged Coalition airstrikes on the village of Tokhar in the early hours of July 19th. Victims were shown being buried in a mass grave. Though reporting remains confused, Tokhar may be the single largest alleged Coalition civilian casualty event since August 2014. 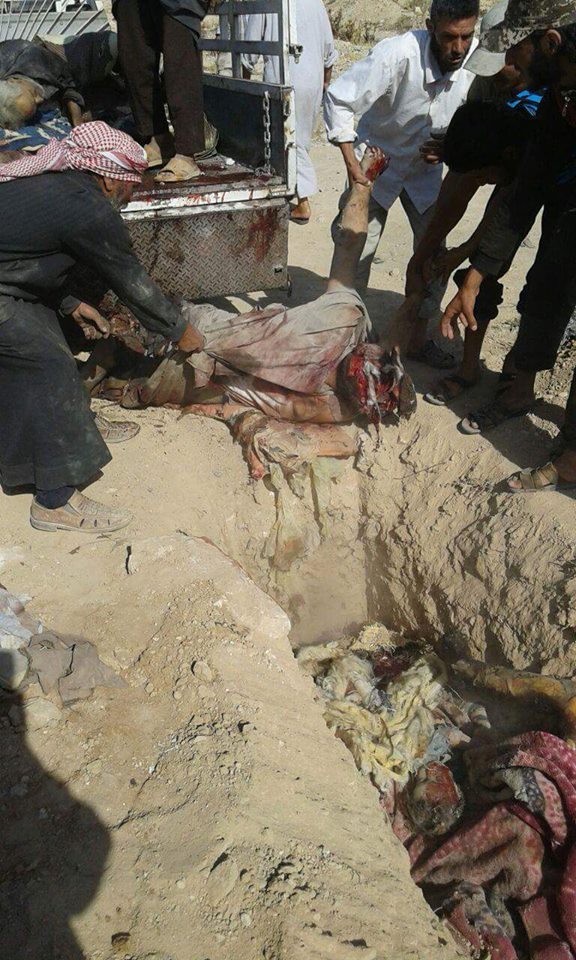 Coalition attacks on Manbij began in earnest on May 21st, in support of a ground assault by the Syrian Arab Coalition (SAC.) Since then more than 450 strikes have targeted the town and surrounding areas, hitting “Da’esh heavy weapons, vehicles, fortifications, VBIED facilities, armored vehicles, technical vehicles, bridges, and caches,” according to the Coalition.

The United States is responsible for almost every strike at Manbij. According to official data, between May 22nd and July 17th this year 637 US airstrikes were carried out in Syria – with just 13 by its Coalition partners.

The US-led Coalition initially focused on driving Islamic State fighters from nearby villages – a tactic “which is encouraging ISIL’s retreat into the city” according to a June 15th press release. By early July almost all strikes were hitting Manbij itself.

The Coalition claims civilians have been able to escape the siege thanks to evacuation corridors provided by advancing SAC forces. But monitors dispute this, insisting ISIL snipers try to kill any non-combatants attempting to leave Manbij.

Expect to see measured pace in the fight to liberate #Manbij. It will not be easy, and we are confident SDF will take city back from ISIL

Casualty claims have been mounting since the siege began, with 40 separate alleged Coalition civilian casualty events reported in and around Manbij to July 19th.

Airwars presently assesses 29 of these events as fair: that is, featuring two or more credible reports, with Coalition strikes confirmed in the near vicinity. At least 190 civilians appear to have died in these actions, including 39 or more children and 23 women. A further 134 or more civilians were reportedly injured.

A significant number of these slain civilians  – 164 so far – have been named by local monitors. One such case is Leen Samer Yusuf Waik, a young girl who died with her grandfather and two other named victims in a July 9th incident.

The Coalition has been aware of civilian casualty allegations at Manbij for some weeks. In the first known siege-related incident on May 31st, at least 3 and as many as 15 civilians died when the Coalition allegedly struck the al Hawatma area of the town. Yet despite widespread media reports on the day, the Coalition claimed to be unaware of civilian casualty allegations when approached by the Independent.

Despite numerous credible allegations of non-combatants killed since then, the US-led Coalition has yet to admit a single civilian casualty from its siege of Manbij.

A CENTCOM statement provided to Airwars and other media on June 19th noted: “We are aware of reports alleging civilian casualties near Manbij, Syria, recently. As with any allegation we receive, we will review any information we have about the incident, including information provided by third parties, such as the proximity of the location to CJTF airstrikes, and any other relevant information presented. If the information supporting the allegation is determined to be credible, we will then determine the next appropriate step.”