Seven weeks into US-backed operations to capture Raqqa from so-called Islamic State (ISIS), more than 100 children are among the many civilians reported killed by heavy Coalition airstrikes and artillery fire targeting the city – as well as in actions by proxy SDF forces on the ground, and from attacks by ISIS itself.

In June, Airwars estimated that at least 340 civilians in Raqqa were likely slain by Coalition strikes and artillery. That pattern has continued into July. According to a running assessment, at least 140 additional civilians perished due to Coalition strikes in the first three weeks of the month.

Since June 6th as many as 119 children are among those killed in and around Raqqa according to local reports, with most of the young victims named.

Local accounts describe street fighting and dangerous explosive fire into the city that has increased dramatically since the official start of operations on June 6th. By mid-July, the US confirmed that Syrian Democratic Forces were suffering heavy casualties – a toll so high that the Pentagon had to publicly counter reports that ground operations were paused.

Instead the US insists the joint campaign will employ new strategies, but that these are not due to the civilian toll. At least one SDF commander disagrees however – telling Syria Direct that the tempo of the assault on the eastern half of Raqqa had been reduced ‘to prevent civilian casualties and preserve historic sites.’

The Coalition says that 45% of Raqqa has so far fallen to SDF forces – though a tough fight remains.

Map of progress made by our partner forces in the operation to liberate #Raqqa as of 24.07 via @SyriacMFS pic.twitter.com/E9lPrDMxvG

Over the past month and a half, an already heavy barrage of airstrikes and artillery aimed at the city has turned more ferocious. According to US Central Command (CENTCOM) data supplied to Airwars, roughly 4,400 munitions were fired into Raqqa by the Coalition during June alone – a huge rise from the 1,000 unleashed in May. These numbers rival what was seen during the worst fighting in Mosul – a city many times larger in size.

Airwars researchers monitoring events in Raqqa say that reports of strikes killing multiple family members, often children, are common. At least 30,000 civilians are believed to still remain trapped in the city, many having already fled there from other parts of Syria. ISIS is forcibly preventing these civilians from leaving.

“Although we are still seeing some incidents where one or two people are being killed there are also many incidents of entire families being wiped out by air and artillery strikes. Often they are described as internally displaced,” said Kinda Haddad, the chief Syria researcher at Airwars.

US officials maintain that Islamic State fighters are using civilians as human shields, much as they have in other cities besieged by Coalition-backed forces. In Mosul, Amnesty International recorded testimony of residents who said ISIS had set booby-traps with explosives to keep civilians penned in, and in some cases had welded them into buildings amid fighting. A representative of the monitoring group Raqqa is Being Silently Slaughtered (RBSS) confirmed that in Raqqa too, ISIS was putting civilians between their own fighters and the Coalition.

“Every day there is heavy shelling, whether by artillery or aircraft,” RBSS said, adding that according to the group’s estimates, 50,000 civilians are in ISIS-held areas of the city. “No one is providing guidance to civilians, the civilians are the biggest losers.”

On July 6th, a mother and her three children were reported killed and at least two other family members were injured after Coalition strikes hit the al Ferdos neighborhood of Raqqa. Several local sources named the children as Jana Nour al Hariri, Shatha Nour al Hariri and Mohammed Nour al Hariri. A picture of Jana posted by Raqqa is Being Silently Slaughtered showed a baby of no more than a year or two, smiling when still alive. 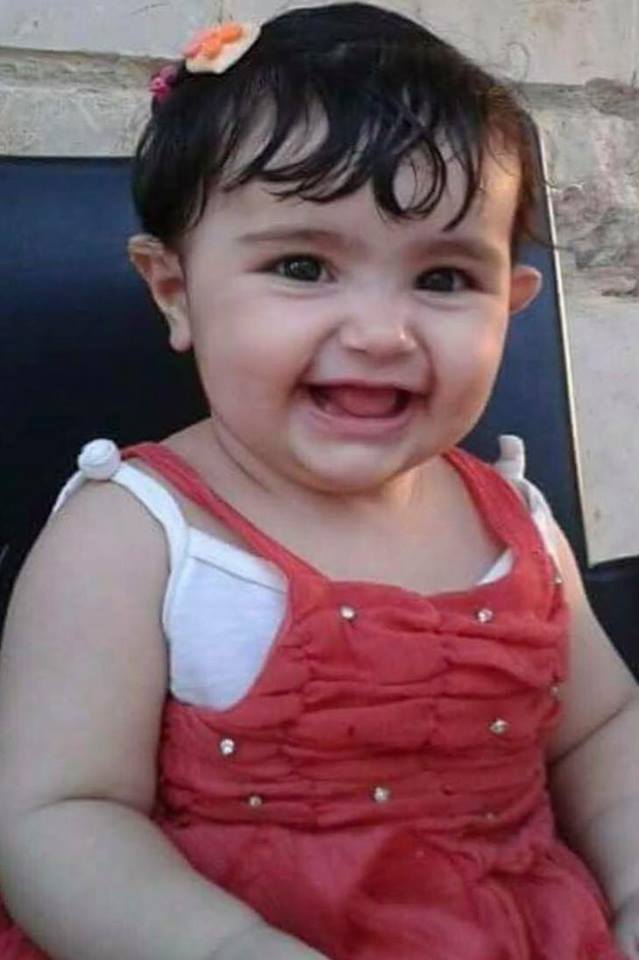 Jana Al Hariri, killed – along with four members of her family – in an alleged Coalition raid on Al Ferdous, July 6th 2017 (via Raqqa Is Being Slaughtered Silently)

Seven more children were reported killed on July 13th, when an airstrike reportedly hit close to a bakery near Fern al Ma’ari in Raqqa. On the same day, another girl named Bayan Awwad al Billo was reported killed in the city, according to local sources. Photos showed her limp body after an airstrike allegedly hit the house of her family.

That children have so often been the victims of such strikes was predictable, said Fadel Abdul Ghany, director of the Syrian Network for Human Rights. Of those with the means to bribe their way out of Raqqa, many were men who feared mandatory conscription by ISIS as the battle for the city approached.

“Children remained, and a huge amount of the killing is of children,” he said.

The list of slain children continues to grow. On July 16th seven members of the Salah Al-Mana family were reportedly killed in an alleged Coalition strike. A week later, local outlets reported that two children – Ro’a and Ahmad Aliji – were killed alongside their father Husam and at least three others in a strike near the Tariq Bin Ziad school in Raqqa.

And on July 25th, Raqqa is Being Silently Slaughtered posted graphic photographs of children it said had been killed by “Coalition airstrikes and #SDF shelling on Raqqa.”

In total, Airwars has tracked as many as 119 children alleged killed in Coalition actions since June 6th. Based on the quality of local reports, at least 87 and as many as 100 of those deaths appear likely to have resulted from US-led actions.

Those who made it out of Raqqa in recent weeks have relayed to aid officials that civilians injured by strikes are cornered, and unable to reach help.

“Patients say large numbers of sick and wounded people are trapped inside Raqqa city with little or no access to medical care and limited chance of escaping the city,” said Vanessa Cramond, medical coordinator for Doctors Without Borders (MSF) in Turkey and north Syria. “MSF is extremely concerned for the wellbeing of those who can’t get out.”

Even as civilians are cut down inside Raqqa, investigators are just beginning to grapple with the heavy toll from strikes that took place during the encirclement of the city earlier this year.

Since the start of 2017, Airwars has recorded more than 1,300 likely civilian deaths tied to Coalition air and artillery strikes in support of Syrian Democratic Forces in Raqqa governorate. The Kurdish-dominated SDF surrounded Islamic State’s self-proclaimed capital in the months leading up to June: more than 700 civilians were estimated killed in attacks during March, April and May.

Human Rights Watch recently visited Tabqah and al Mansoura, to the west of Raqqa. Both cities are now controlled by the SDF, but reportedly suffered major civilian casualties from airstrikes before being captured. One raid, on a school in Mansoura  on March 21st, was by some accounts the deadliest of the entire Coalition air campaign. At least several dozen civilians were likely killed – though there were claims by some that 200 or more died in the event.

However even before an official investigation could be concluded, Coalition commander Lt. Gen. Stephen Townsend told reporters on March 28th that he believed no civilians had been killed in the incident.

“We haven’t completed our assessment of that event yet,” said General Townsend. “But my initial read is: not credible. I think that was a clean strike.”

The Coalition’s civilian casualty assessors subsequently echoed the General’s conclusion, determining the incident to be Not Credible. It remains unclear to what extent Townsend’s remarks might have influenced the Coalition’s investigative process. However, Human Rights Watch, along with an independent UN Commission of Inquiry on Syria, have determined that many civilians – largely internally displaced people – did die in the attack.

Airwars monitored multiple local reports at the time of the event which also suggest such a toll. Airwars also provided the Coalition with local media reports detailing an influx of IDPs to the al Mansoura area a few weeks prior to the event – something the US-led alliance appears to have been unaware of at the time of the attack.

“What we were able to confirm is that several Coalition attacks in these two towns resulted in significant civilian casualties,” said Ole Solvang, deputy director of Human Rights Watch’s emergencies division. “In some cases, the civilian casualties happened when Coalition aircraft carried out close air support attacks to support Syrian Democratic Forces who were in direct contact with ISIS fighters on the ground, striking houses where civilians were hiding.”

“In other cases, it really seems that the Coalition failed in its homework, launching attacks before properly understanding what buildings were being used for, and how many civilians were there,” he added.

Lt. Gen. Townsend has made additional comments which raise questions about the Coalition’s civilian protections. After the UN’s Commission of Inquiry rang alarm bells at significant numbers of civilians being killed in airstrikes around Raqqa, the General responded incredulously.

“Show me some evidence of that,” he said to the BBC.

On July 2nd, Townsend also told the New York Times “we shoot every boat we find” along the Euphrates River. The Euphrates and nearby riverine land has been the site of dozens of documented civilian deaths in the past month, including civilian boats attacked and sunk; and numerous residents killed as they searched for drinking water as clean supplies in Raqqa have dwindled. 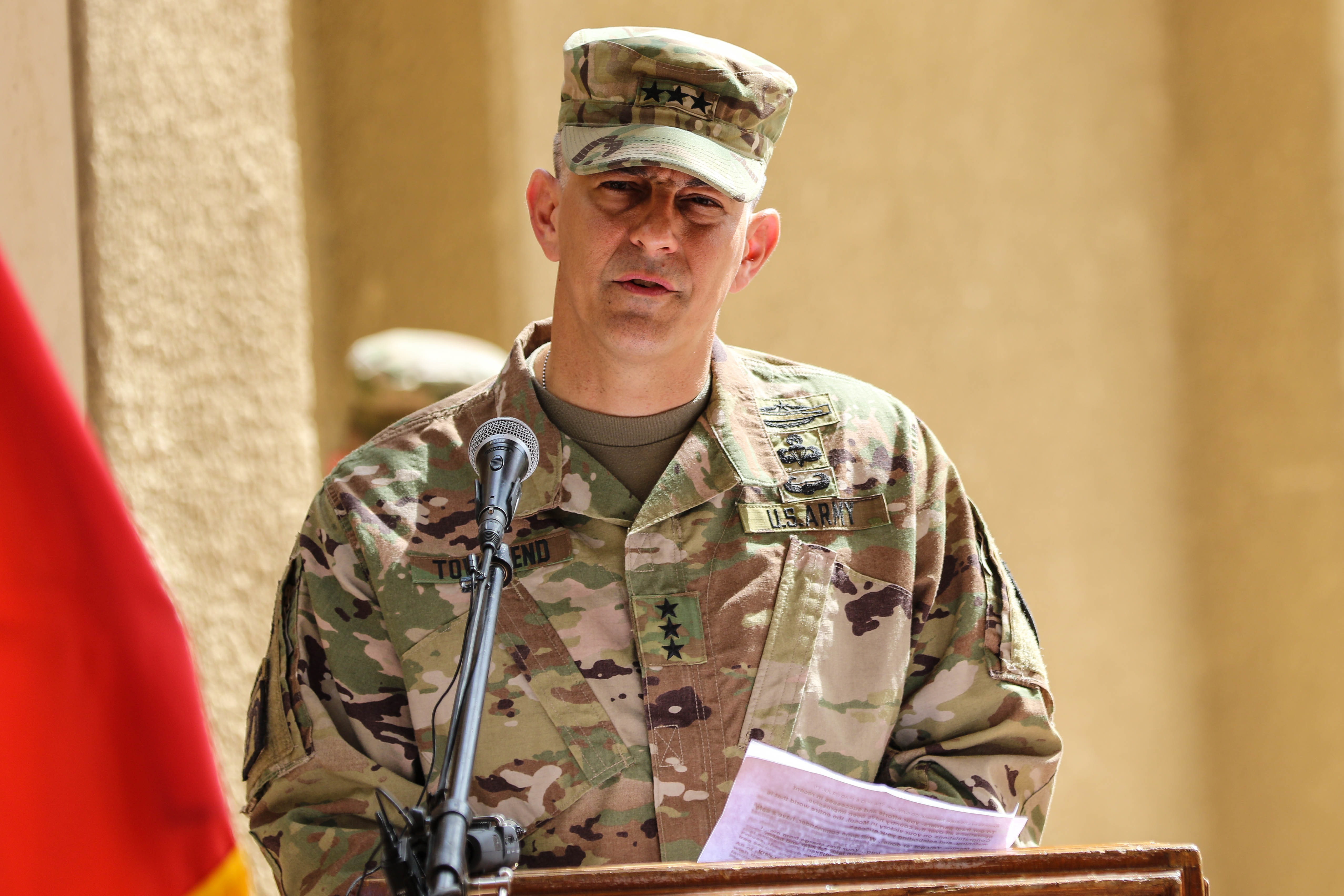 Adding to the woes of civilians in Raqqa governorate, Airwars researchers have also monitored an increase in pro-regime strikes in the area. In recent weeks regime forces, backed by airstrikes have captured areas to the southeast of Raqqa as they move to capture Deir Ezzor – itself the site of deadly Coalition air raids in July.

Local monitors have reported that Russian planes are dropping leaflets instructing residents to evacuate towns in eastern Raqqa. The use of cluster munitions and barrel bombs has also been reported, along with civilian casualties.

On July 23rd, Raqqa is Being Silently Slaughtered reported upwards of 60 pro-regime airstrikes “on the villages and towns of the eastern Raqqa countryside.” Strikes on the town of Zour Shamar that day reportedly claimed the lives of six civilians and left nearly 20 injured.

The worst raid in recent weeks appears to have taken place on July 24th, when a purported Russian raid hit the Juweizat camp near Al-Sharida in the southern countryside, allegedly killing 40 civilians.

“The most startling thing to note the last few days is that a big chunk of the incidents we have picked up were contested between the Coalition and Russia and in some cases the regime,” said Airwars researcher Haddad.

Amid the carnage, international media and NGOs are thin on the ground at Raqqa compared to their recent presence in Mosul. Without local monitors, little information about civilians being killed — including their names — would find its way out. As Coalition-backed forces and the regime race one another to capture ISIS strongholds, civilians are likely to continue to pay a significant price.