Libya: a year of living dangerously

Tripoli, the capital of Libya, has entered its second year of being under siege, part of the most significant upsurge in violence in the country’s intermittent civil war since 2012. Hundreds of civilians have so far died – with little effort either domestically or internationally to bring the fighting to an end.

While most of the world is currently seeking refuge from the COVID-19 virus in their homes, many Libyans in the nation’s capital face a dilemma: stay in their houses and possibly fall victim to indiscriminate shelling – or leave their homes, and risk getting infected in the ongoing pandemic.

As crude as it may sound, the worldwide corona crisis had initially raised hopes among Libyans that the Libyan National Army (LNA) and the Government of National Accord (GNA) might agree to a humanitarian ceasefire. After years of destruction and mismanagement, the country’s health system is likely incapable of handling both a pandemic and civil war at the same time. An oil blockade in Libya coupled with a global collapse in oil prices is also likely to lead to a severe financial crisis.

“My most recent visit to Tripoli was in early December and it was clear at that point that the population was suffering greatly from the war, with hundreds of thousands displaced from their homes, the only operating airport in the city repeatedly shut down as a result of attacks, and concerns that the fighting would soon enter the city centre,” says Mary Fitzgerald, a well respected Libya analyst.

She adds: “Now four months on – following some of the bloodiest weeks of the war, a damaging oil blockade, and the spectre of the Coronavirus pandemic – Tripoli residents I speak to are even more fearful of the future. The fact that the war continues with no end in sight shows where the belligerents’ priorities lie.”

The impact of COVID-19 on this precarious nation has been further amplified by the recent death from the virus of former Libyan Prime Minister Mahmoud Jibril. OCHA has so far confirmed 18 cases and one death in Libya, with over 300 people so far in quarantine.

On this day a year ago, Mr. Haftar began his #Tripoli offensive and promised to take the capital within 2 weeks. Thousands became victims of the ongoing clashes. The NPO @airwars has monitored reports of civilian casualties on both sides. I've collected them in this chart. #Libya pic.twitter.com/CyGAKBwhvX

Libya’s population has indeed been suffering greatly from the war. According to Airwars data, between 324 and 458 civilians have been killed nationally by 2,034 air and artillery strikes since April 4th 2019, and another 576 to 850 injured. This means that 52% of civilians killed since the end of the civil war in 2011 have been reportedly slain within the last twelve months.

Foreign meddling has exacerbated the impact on the civilian population. The LNA receives support from the United Arab Emirates, Russia, Jordan and Egypt. The GNA, on the other hand, is publicly backed by Turkey and Qatar.

“The international backers have played a crucial role. The offensive of April 4th, 2019, was immediately met with tremendous resistance, and eastern Libyan fighters did not want to risk their lives for Haftar 600 miles away from home,” explains Jalel Harchaoui, Libya Research Fellow at Clingendael in The Hague.

“The reason the offensive managed to continue is because the UAE intervened militarily. Eager to offset the LNA’s weaknesses on the ground, the UAE carried out more than 900 air strikes in the greater Tripoli area last year using Chinese combat drones and, occasionally, French-made fighter jets,” Harchaoui asserts.

Airwars has recorded local reports of 1,113 LNA or Emirati strikes over the last year, whose air forces have become so intertwined that it’s often impossible to distinguish who bombed. These allegedly led to between 209 and 308 civilian deaths, making the LNA and UAE likely responsible for the majority of civilian harm in Libya since April last year.

Both air forces were also accused of conducting those individual strikes which resulted in the greatest civilian harm over the last 12 months. On July 3rd 2019, an airstrike hit a migrant detention centre in Tajoura, most likely conducted by an Emirati fighter jet, according to the BBC. The number of reported deaths has varied between 37 and 80 civilians, with OCHA and UNSMIL estimates at 44 and 53 deaths respectively. In December, a UN Panel of Experts report raised concerns about the thoroughness of the post-strike investigation at Tajoura, and suggested that deaths had been exaggerated. Conversely, interviews with some eyewitnesses indicate the death toll might actually be higher than 53.

The second biggest reported event was an airstrike on Murzuq on August 4th 2019, allegedly leading to between 42 and 45 civilian deaths, after a town hall meeting was reportedly hit. Again, the LNA or the Emirates were accused.

Turkey responded to the UAE by deploying Bayraktar TB2 drones and military advisers. In December, the two boosted their military cooperation by formalising a deal.

According to Airwars monitoring of local reports, the internationally recognised GNA government and its close ally Turkey conducted 402 air and artillery strikes over the last year, leading to between 55 and 75 civilian deaths. 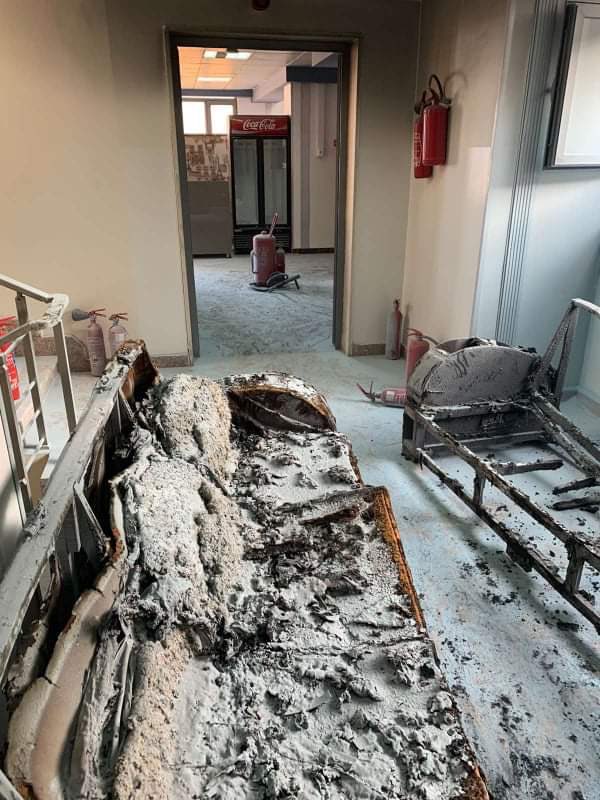 Despite an initially slow performance on the battlefield, the LNA was looking at potential victory towards the end of 2019, when its Chinese-made Wing Loong drones managed to take out several smaller Turkish drones over Tripoli. Haftar now ruled the skies – but was interrupted by the Berlin process and a ceasefire deal between Russia and Turkey. The agreement struck on January 18th brought a brief period of relative peace to the Libyan capital. Meanwhile, international backers used this period to smuggle even more weapons into the country, despite supposed commitments to respect the ongoing UN arms embargo.

The most important introduction was the Turkish Korkut, a state-of-the-art anti-aircraft gun. A UN source, who asked not to be named for this article, told Airwars: “If you fly within 4km of a Korkut you’re toast.” The source added that this strike range can potentially be extended to 11 km, using ATOM munition. However this is reportedly harder to deliver according to the source, making it unclear whether they are currently being used in Libya.

“The Korkuts are currently protecting Mitiga and Misurata airports and they’re easily hidden in a bush or something similar,” the source says. Turkey has supposedly deployed six of these anti-aircraft guns and by doing so “made it clear that Haftar cannot win the war. If the LNA wants to win now, they have to do something unusual on the frontline.”

The UAE seem to have reacted to the beefing up of its opponent’s forces by flying extra military materiel into Libya, sometimes through convoluted routes via Eritrea. What these deliveries contain is opaque: “As they fly it in via plane, it is harder to determine what the LNA received,” the UN source explains.

One interesting recent addition to the LNA’s arsenal is the Chinese-made DHI-UAV-D-1000JHV2 UAV counter-drone gun. Fighters have been spotted with the eye-catching device that takes down drones by jamming their signal on several occasions. However, who delivered the guns to the LNA is unclear according to the UN source.

a much clearer picture 🙂 pic.twitter.com/301Ygmyo4F

The Berlin process – a failure

The weapon and mercenary influx on both sides is part of the reason why Libya’s hopes for a ceasefire – and any long-term success for the Berlin peace process – have proved disappointing. Instead of concentrating on assisting relief efforts for any local coronavirus outbreaks, Libyan forces and their international backers are instead exploiting distractions among the international community to resume fighting.

“The Berlin process has achieved little more than words on paper. Violations of the arms embargo have actually increased since the Berlin declaration,” Mary Fitzgerald says. “While it remains to be seen what the EU naval operation Irini achieves – though many are sceptical given its limited mandate – the crux of the matter is that no one is willing to name and shame the most egregious violators of the arms embargo, let alone sanction them.”

“I still do not think the LNA will be able to win. But it may enter the downtown area of Tripoli and do tremendous amounts of damage while doing so. One also has to highlight the very possible scenario where the Government of National Accord’s forces and the Turkish mission succeed in expelling the LAAF [Libyan Arab Armed Forces] from Tripolitania altogether,” Jalel Harchaoui concludes.

As the siege of Tripoli enters its second year, all Libyans face a bleak potential future – with worries over an escalating conflict; the COVID-19 pandemic; and financial uncertainties resulting from the collapse in oil prices. However this civil war may end, it will likely have grim consequences for Libya’s long suffering civilians.

▲ A fighter wears a facemask to protect from coronavirus (COVID-19), while taking part in operations in support of Libya’s Government of National Accord (GNA) against the forces of warlord Khalifa Haftar in Tripoli, Libya on March 25, 2020. (Amru Salahuddien/ Anadolu Agency)