In a blistering new report, Amnesty International has accused so-called Islamic State, the US-led Coalition and Iraqi forces of failing adequately to protect hundreds of thousands of civilians still trapped in Mosul. Airstrikes in particular are singled out for criticism: “Evidence gathered on the ground in East Mosul points to an alarming pattern of US-led coalition airstrikes which have destroyed whole houses with entire families inside,” notes Amnesty’s Donatella Rovera following a visit to the war-torn city.

“The high civilian toll suggests that coalition forces leading the offensive in Mosul have failed to take adequate precautions to prevent civilian deaths, in flagrant violation of international humanitarian law.”

Amnesty’s report is mostly focused on East Mosul, which was finally liberated in January. Yet the campaign to capture the west of the city – which began on February 19th – is exacting an even higher toll among non-combatants.

Identical twins Ali and Rakan Thamer Abdulla were among at least 101 civilians killed in a major incident in West Mosul on March 17th-18th, Airwars has learned. Their father and as many as 23 other family members also died with the twins at Al Jadida, in one of the worst losses of civilian life so far recorded in the grinding war against so-called Islamic State (ISIL).

The US-led Coalition has now said it carried out airstrikes on March 17th “at the location corresponding to allegations of civilian casualties” and is investigating. Five international allies regularly bomb at Mosul alongside the Iraq Air Force – the US, Britain, France, Australia and Belgium – and it is presently unclear which nation or nations carried out the confirmed strikes at Al Jadida.

Complicating matters further, there are also reports that Iraqi artillery struck nearby, and that ISIL may additionally have been involved. Some locals say that airstrikes set off a secondary explosion – possibly a carbomb or fuel truck – that then caused buildings to collapse in Al Jadida.

Reporter Anthony Lloyd of the London Times – who recently visited the scene – told Airwars he believed there may have been two or three related  casualty events at Al Jadida over a short period of time, adding to the confusion.

Many of those who died at Al Jadida perished alongside their kin. Entire families had gathered in house basements, which they hoped would afford them some protection from the ferocious air and artillery barrage targeting ISIL forces in the neighbourhood on March 17th-18th. Instead entire rows of houses collapsed, entombing those below.

Pictures posted to social media showed the twins, Ali and Rakan Thamer Abdulla performing at competitions and smiling with their family. The Facebook page for Gym Egypt – a large Arab bodybuilding site – posted a short note about Ali and Rakan, calling them “heroes of Iraq.” The twins were the son of Haj Thamer Abdulla, who according to local reports was also killed along with his sons and daughters – numbering 26 family members in all.

Other victims of the al Jadida disaster named in local reports include 12 members of the family of Khadr Kaddawi; 11 members of Basem al-Muhzam’s family; and 30 civilians from the Sinjari family. 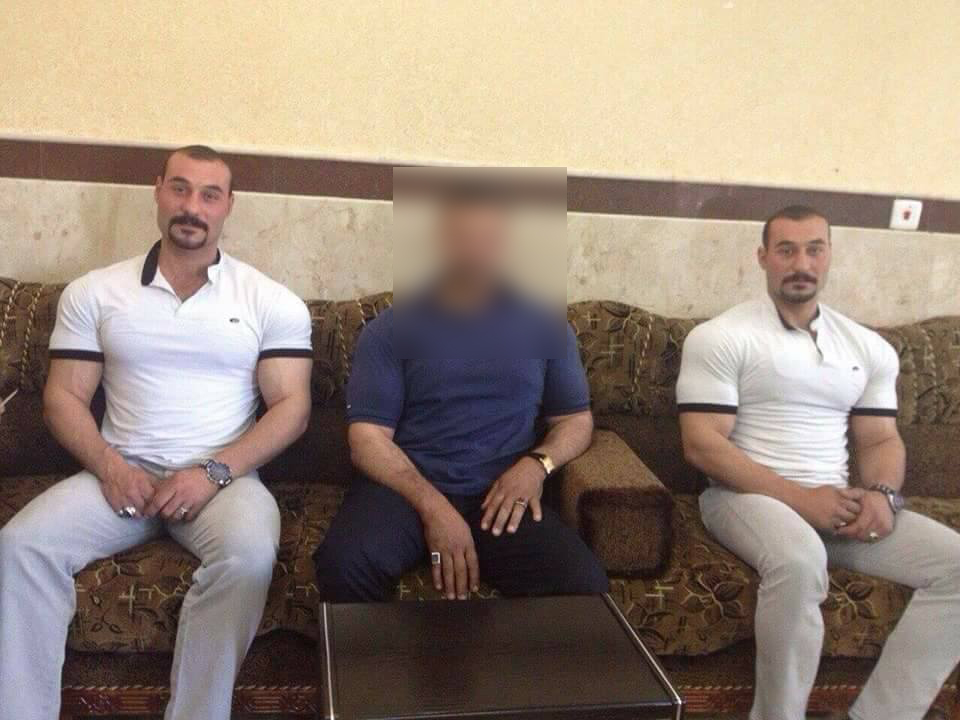 ‘We are investigating the incident’

Where responsibility lies for at Al Jadida is still unclear. On March 26th, CENTCOM commander General Joseph Votel said “we are investigating the incident to determine exactly what happened and will continue to take extraordinary measures to avoid harming civilians.” CENTCOM chief spokesperson Colonel John Thomas later told Airwars that the US was reviewing some 700 videos captured by aircraft in Mosul on several days around March 17th.

Despite reports suggesting that its artillery may also have hit the street, the Iraqi military has blamed ISIL for the deaths, saying that 61 bodies had been recovered at the site of a booby-trapped house, which it described as “completely destroyed.” The statement added that “there is no hole or indication that was subjected to an air strike.”

That account strongly contradicted much field reporting and the accounts of other officials. A provincial health official, for instance, told Reuters that wide swaths of the neighborhood were destroyed in fighting. “Civil defense has extracted and buried 160 bodies up to this moment,” said the official. Earlier, Iraqi civil defense had reported at least 137 bodies were recovered. On March 27th, the Iraqi Civil Defense Department cited an even larger figure of 531 victims recovered from the Al Jadida neighborhood.

Pictures from the neighborhood showed dozens of bodies being buried in mass graves, wrapped in blue tarpaulins. Marcus Yam, a photographer for the LA Times, filmed a woman, Turkya Azudin, watching corpses being pulled from the rubble. Ms Azudin told him she had lost 18 members of her family.

To what extent Coalition airstrikes were responsible for more than 100 deaths at Al Jadida – either directly, or via secondary explosions – may also contain clues on why civilians are now more at risk on the battlefield. Though the Pentagon denies that its rules of engagement have been changed since Donald Trump took office, Iraqi officials have said it is now easier to call in US and Coalition airstrikes in western Mosul. In December, Coalition leaders also made the decision to allow lower level commanders the authority to call in airstrikes – but claimed these would still face the same scrutiny.

Full statement from Coalition confirming changes were made in December to who could call in airstrikes. Claims that same scrutiny applies. pic.twitter.com/11evCT2hLH

“Based on lessons learned during phase I of the Iraqi security forces liberation of East Mosul, the CJTF-OIR commander delegated approval authority for certain strikes to battlefield commanders to provide better responsiveness to the Iraqi security forces when and where they needed it on the battlefield,” Coalition spokesman Col. Joseph Scrocca told Airwars. “This is not a change to rules of engagement, but merely a procedural change.”

“What you see now is the result of fighting an evil enemy in a dense urban environment where ISIS is using civilians as human shields, using homes as fighting positions, schools as weapons storage facilities, and mosques and hospitals as bases for its terrorist operations,” added Scrocca.

Whatever the semantics, the reality on the ground is that civilians are at greater risk of harm. Across Iraq and Syria, Airwars has monitored claims of more than 1,200 civilian fatalites tied to Coalition activity during March alone. That level of allegations is on a par with some of the most intense periods of Russian activity in Syria during 2016.

This scene will haunt me for a while: Turkya Azudin watches workers pull out corpses from her home and count relatives she had lost: 18 pic.twitter.com/ig3sInm5Mp

In Iraq’s second largest city, a perfect storm now places civilians in extreme danger. Iraqi security forces have set up military positions in residential areas as the assault advances, drawing enemy fire while launching their own rounds – at times indiscriminate – into some of the most densely populated areas of Mosul. US-led airstrikes have hit some of these same neighbourhoods, along with ground-launched artillery, rocket and mortar strikes. Also on the ground, so-called Islamic State fighters routinely put civilians at risk by placing snipers on top of residential buildings, or by deploying explosives or truck bombs near civilian buildings.

According to the most recent United Nations estimate more than 400,000 civilians still remain trapped in a relatively small area of West Mosul. Given the intensity of the battle, high civilian casualties are inevitable. As one US Apache helicopter pilot said in a recent interview, “I can’t see into houses.”

“We have been trying to follow the issue of airstrikes and its impact on civilians – it is happening, and we have advised the government that conducting airstrikes in densely populated areas will necessarily result in civilian casualties, particularly given ISILs use of human shields which sources in Mosul and people leaving the area have confirmed,” said Francesco Motta, director of the UN’s Human Rights Office (HRO) in Iraq.

“Multiple sources have reported to HRO that ISIL have been deliberately locking families and civilians in their houses and placing offensive positions on the rooftops etc, in order to ensure serious casualties, and has been forcibly transferring people within western Mosul for this purpose. HRO has also received reports of civilians used as human shields being tied up to cars and used in public parades in areas of western Mosul under ISIL control.”

Amnesty International has also strongly criticised ISIL’s abuse of civilians in its latest report. But it says this does not excuse Coalition or Iraqi military actions which also place civilians at risk: “IS shamefully resorts to using civilians as human shields, a serious violation of the laws of war that amounts to a war crime. In a densely populated residential area, the risks for the civilian population become enormous. However, the IS’s use of human shields does not absolve Iraqi and coalition forces from their obligation not to launch disproportionate attacks,” says Donatella Rovera.

Whatever ISIL’s tactics, it appears certain that hundreds of civilians have died this month alone as a result of incoming fire from Iraqi and Coalition forces. International and local media are uncovering ever more civilian casualty incidents. The Guardian found survivors of a March 22nd strike in Mosul that left at least 15 civilians dead. With so many major incidents across the city that week, the family’s plight had never been publicly reported at the time.

The question facing Coalition and Iraqi commanders – whatever their official rules of engagement or combat guidelines – is how many civilian deaths they are prepared to inflict in order to defeat ISIL at Mosul. There are already warnings of a hollow victory if the cost is too high. As Amnesty notes, “The civilian population has borne the brunt of the battle to recapture Mosul, with all sides displaying a chilling indifference to the devastating suffering caused to the city’s civilians.” 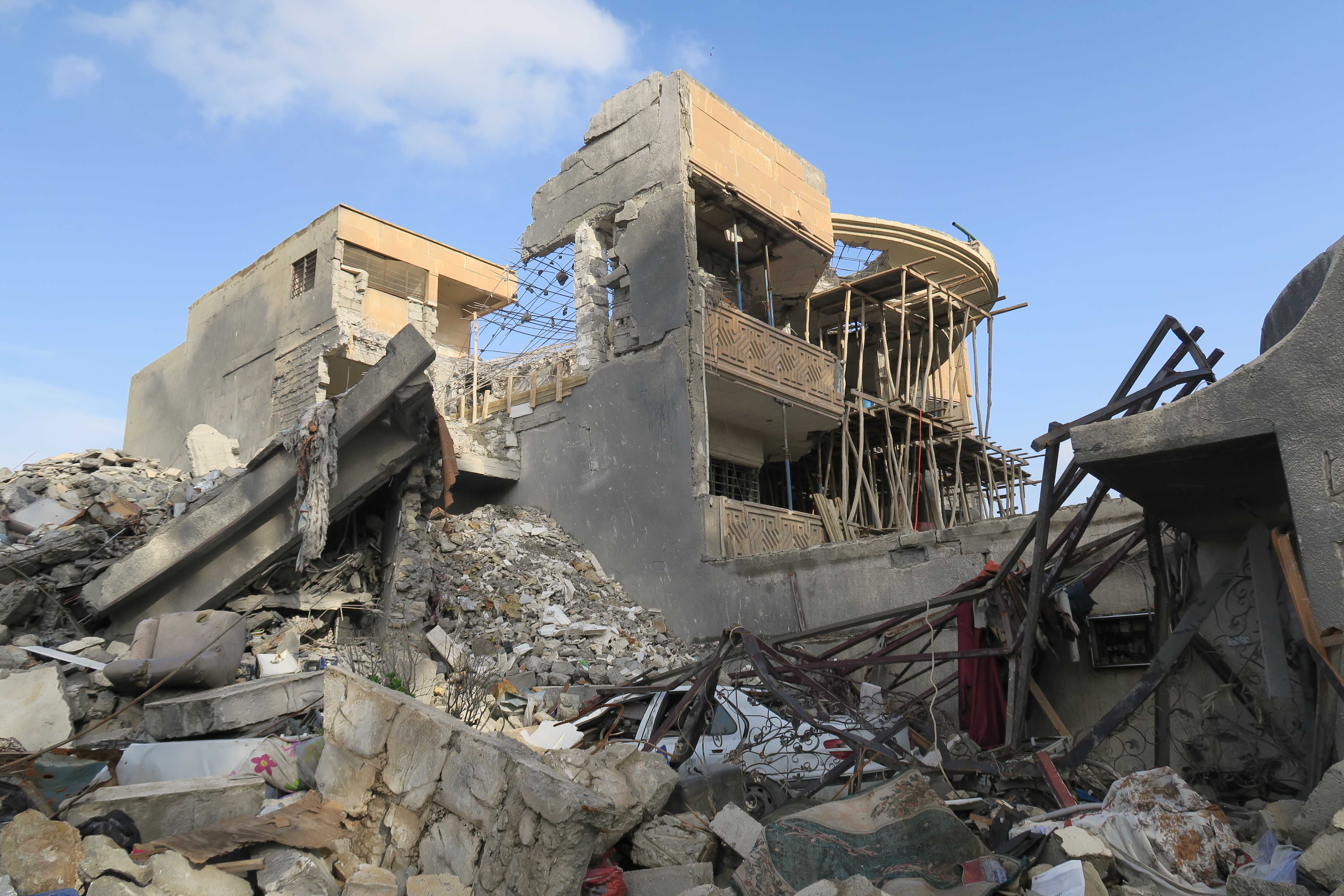 According to Amnesty International, 16 people were killed ‘in a Coalition strike’ at this location in Hay al- Mazaraa, East Mosul, on March 13th 2017