A lethal US drone strike in Syria on March 16th did target a mosque – as locals have always insisted and American officials have denied – according to new analysis by Forensic Architecture, Human Rights Watch and Bellingcat. Researchers also allege that the US launched Hellfire missiles at civilians as they fled the mosque, killing many.

The new reports make use of before and after imagery of the buildings; eyewitness testimonies; and architects’ drawings to demonstrate that the United States did indeed target the Sayidina Omar Ibn Al-Khattab mosque, located about a mile southwest of al-Jinah in Aleppo governorate.

“Our analysis reveals that contrary to US statements, the building targeted was a functioning, recently-built mosque containing a large prayer hall, several auxiliary functions and the Imam’s residence,” according to Forensic Architecture.

In its own report Human Rights Watch argues “that US authorities failed to take all feasible precautions to avoid or minimize civilian casualties in the attack, a requirement under the laws of war.”

In a detailed video report released April 18th, Forensic Architecture – based at Goldsmiths College at the University of London – presents evidence, including videos and pictures taken before and after the strike, accompanied by 3D modelling, that identifies and illustrates various sections of the mosque. The northern portion, which was destroyed, included “a dinning area, the toilets, a ritual washing area and the secondary, smaller prayer room.” Witnesses said that several hundred people were in the building, including around 50 in the smaller prayer room, which is also known as the “winter prayer hall.”

According to local residents who spoke with Human Rights Watch, the attack began “just before or around” 7PM. The attack took place slightly over an hour after what would have been Maghrib (sunset) prayer and roughly 15 minutes before Isha’a (night) prayer. One witness said that many people would stay in the complex, moving from the prayer hall to kitchen area “to eat and rest before the night prayer.” Four witnesses that researchers at Human Rights Watch spoke with estimated there were 300 people attending a religious lecture at the mosque when the attack began.

After two 500lb bombs destroyed the northern segments of the building, worshipers and those inside the main prayer hall in the southern part fled. At this point, many of those fleeing were fired on by what researchers working with Forensic Architecture, as well as Human Rights Watch later identified as likely Hellfire missiles. This account – of larger bombs and at least several Hellfire missiles being fired – is in line with the total number of munitions earlier reported by the Washington Post.

“Exchanging architectural plans and photographic analysis with people on the ground we managed to reconstruct a detailed model of the mosque,” said Omar Ferwati, project coordinator for Forensic Architecture. “We believe that the US forces that targeted the building misidentified the nature of the building, leading to high levels of civilian casualties.”

Working with Mohammad Halak, head of the local White Helmets rescue team, researchers determined that eight people were killed and 11 injured “as a result of the first two blasts within the norther part of the building.” Among the casualties were the Imam’s wife Ghousoun Makansi who died when the couple’s upstairs apartment was also destroyed in the attack; as well as two brothers – Mohammad Khaled Orabi and Hassan Ombar Orabi, aged 14 and ten. According to Forensic Architecture, the rest of the casualties were due to missile strikes which then hit the area outside the mosque. On a road, researchers were able to match marks – geolocated by Bellingcat – with those traditionally left by Hellfire missiles.

Such ‘double tap’ strikes gained infamy during the most controversial periods of the CIA’s drone campaign in Pakistan.

Airwars was the first to report confirmation of US involvement in the al Jinah strike, which was perpetrated with the use of drones on the evening of March 16th. Monitoring by Airwars presently puts the death toll at at least 37. The White Helmets, who estimated that over 50 perished, provided the names of more than two dozen of the dead included five children.

Al-Jinah is just across the border from Idlib, the Syrian governorate where the US has carried out an increasingly intense unilateral campaign against alleged al Qaeda-linked targets. Initially, US officials told Airwars the strike had taken place in Idlib. Operations like the one that targeted al-Jinah are officially separate from the anti-ISIS campaign elsewhere in the country. 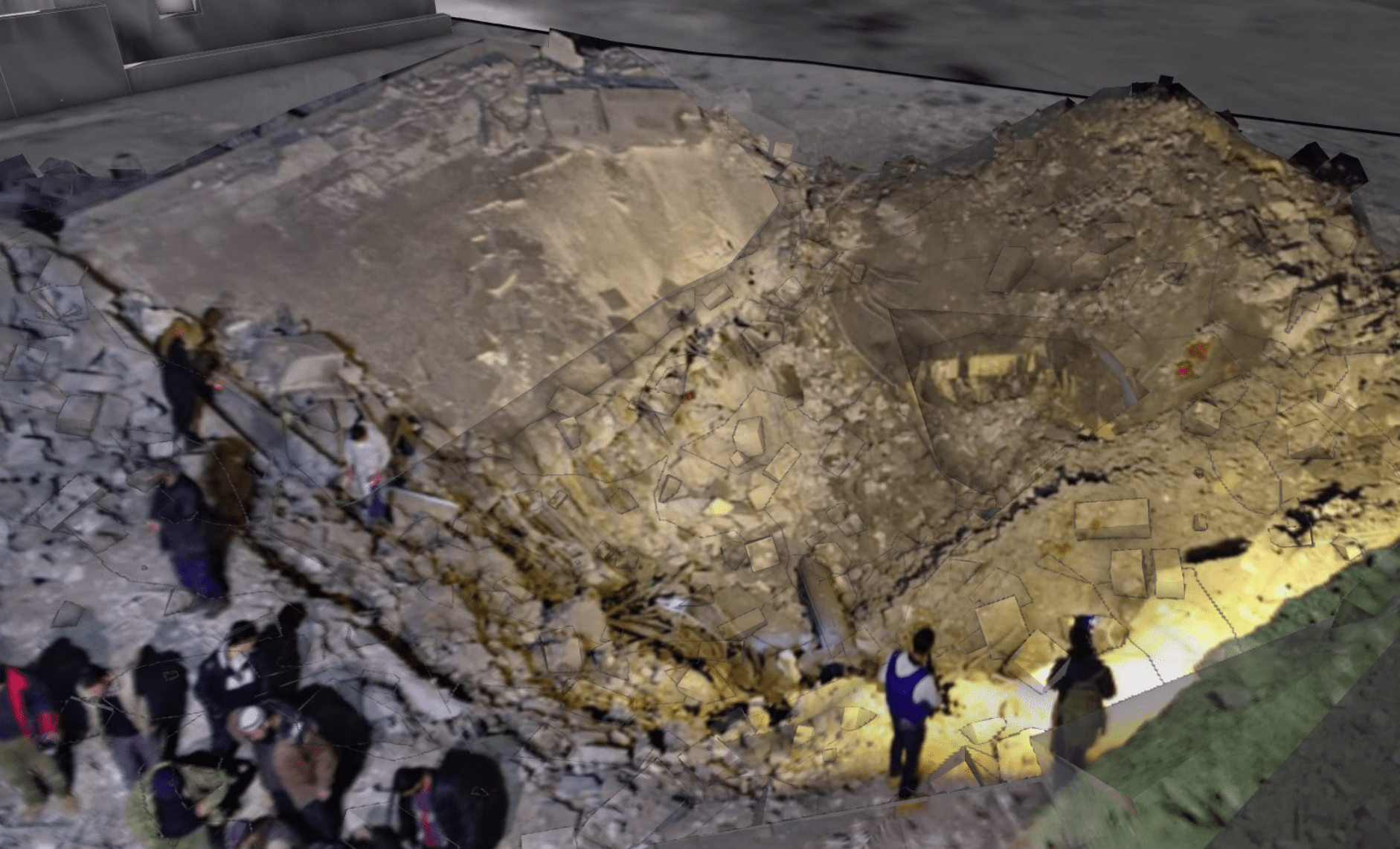 Forensic Architecture and collaborating researchers identified two large craters in the northern section of the building.

Shortly after the strike, the Pentagon released a picture of where the drones had hit, showing the left (north) side of a building crumpled from impact, while the remainder of the structure appears still standing. Across from destroyed sections is a smaller structure, which looks to be untouched.

US officials still insist that the target, successfully hit that night, was ‘an Al Qaeda in Syria meeting location,” and that the smaller building across the street had been identified by the Americans as a mosque, and therefore avoided.

“Intelligence indicated that al Qaida leaders used the partially-constructed community meeting hall as a gathering place, and as a place to educate and indoctrinate al Qaida fighters,” Pentagon spokesperson Eric Pahon told Airwars after the attack.

Yet Forensic Architecture concludes that this identification was incorrect, along with initial claims that the strike had taken place across the border in Idlib, and that no civilians were killed. Researchers at Bellingcat determined that the civilian casualties due to the strike “are partially the result of the building’s misidentification.” Central to the disparity in accounts was an apparent American determination that because they had identified one mosque, the building across the street – which was in fact a larger, newer mosque – couldn’t be one as well.

Witnesses, including the director of Aleppo’s Civil Defense, told Human Rights Watch that victims were not wearing military clothing. In its report, Human Rights Watch said it “has not found evidence to support the allegation that members of al-Qaeda or any other armed group were meeting in the mosque.”

“The US authorities’ failure to understand the most fundamental aspects of the target and pattern of life around the target raises the question whether officers were criminally reckless in authorizing the attack,” concluded HRW researchers.

The Bellingcat study includes details of the Tablighi Jamaat, “a non-political global Sunni Islamic missionary movement which focuses on urging return to primary Sunni Islam.” The group – which says one of its classes was struck – has at least 12 million supporters globally according to Bellingcat. The open-source collective also includes a detailed timeline of the Al Jinah event. 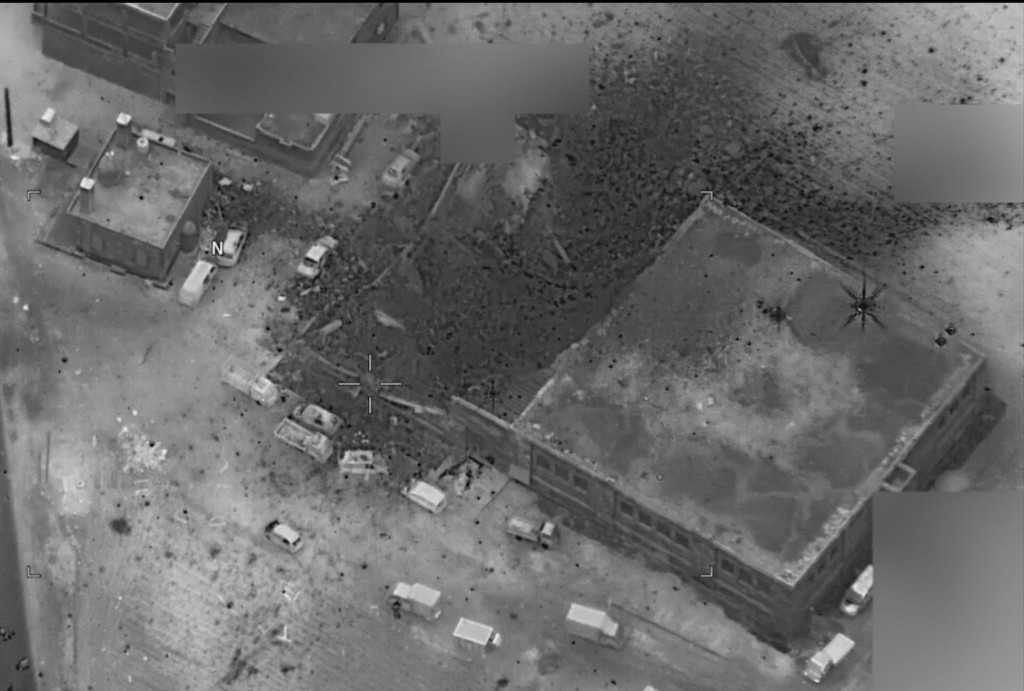 The Pentagon issued this photograph to demonstrate, it claimed, that it had not bombed a mosque in Syria. Forensic Architecture now says the opposite is true