Civilians are continuing to benefit from a months-long ceasefire in northern Syria, which has seen casualty numbers sharply fall to levels last seen in the early months of the civil war. Experts remain divided however, on how long this pause in fighting will last – and what it means for Syria and its divided people.

April and May 2020 marked the first complete months since the beginning of the Russian campaign in Syria in September 2015, in which Airwars did not monitor any civilian casualty allegations against Moscow. A ceasefire beginning in early March – and international pressure in the wake of the Covid-19 crisis – brought an end to months of violent air raids on Idlib governorate, which had killed up to 556 civilians.

On March 5th, 2020, Russia and Turkey reached agreement on a ceasefire in Idlib governorate, after recent escalations had led to the deaths of 36 Turkish soldiers. Terms included the provision of a 12 kilometre long safety corridor alongside the M4 highway, which connects Aleppo with Latakia; and joint patrols by Russian and Turkish forces.

“The reason why Russia signed the ceasefire is because it got what it wanted. Their endgame has always been to secure the integrity of the Syrian regime,” argues Alexey Khlebnikov, a Middle East expert and Russian foreign policy analyst with the Russian International Affairs Council (RIAC). “The priority in Idlib was never to take it over in its entirety. The campaign was not targeted at getting every centimetre. There were and there are two major goals: securing the M5, which connects Aleppo and Damascus, and the M4 highway, connecting Aleppo with Latakia.”

According to some experts, Turkey did less well out of that agreement. Gerhard Mangott, a professor at the University of Innsbruck specialising in international relations and security in the post-Soviet region, notes: “The ceasefire is a compromise between Russian and Turkish interests, with poor results for Turkey and good results for Russia. Turkey had set an ultimatum to the Syrian government to withdraw to the front line of April 2019, when Syrian and allied forces started their offensive in Idlib. Due to Russian pressure, Turkey had to accept the actual front line.”

As the last remaining opposition stronghold, north west Syria was targeted heavily during a three-month campaign by the Assad regime and Russia as they sought to gain control of the region. Russian-backed pro-government forces (made up of Syrian Government forces, Hezbollah, and allied armed groups) attempted to push into both Idlib and Aleppo Governorates, and defeat remaining anti-government rebels.

The beginning of the offensive saw pro-government forces make quick advances against rebel troops. By the end of December 2019, the Assad government had captured large parts of the Ma’arat Al Nu’man countryside including Jarjnaz, the largest town in the area; and had completely encircled the main Turkish observation point in Sarman.

Then, following a short-lived ceasefire between January 9th and 15th, the Syrian Government made some of its most significant advances in Idlib since the civil war began in 2011. By January 28th, pro-government forces had managed to capture Ma’arat Al Nu’man, a city of major strategic and symbolic importance due to its position on the Aleppo-Damascus Highway, which serves as one of the country’s main economic arteries to areas under government control in northwestern Syria.

Just eight days later, the town of Saraqib – another locale which had served as a bastion against the Assad Government for many years – was captured. The following weeks saw more government advances including the full capture of the province of Aleppo for the first time since the outbreak of the civil war.

Russian airpower has been crucial to each pro-government advance. However, these military victories came at a catastrophic cost to civilians, in both Idlib and Aleppo. Heavily populated urban areas were pummelled before each incursion, with almost no respite for residents.

During the three months of the campaign, Russia was allegedly involved in 250 separate civilian harm incidents – averaging more than three events every day. These airstrikes led to between 423 and 556 civilian deaths and the injuring of up to 1,137 more, Airwars monitoring of local sources indicates. At least 128 children were killed during the campaign – more than a quarter of all tracked fatalities – showing that the most vulnerable often bore the brunt of a ruthless air campaign.

Additionally, crucial civilian infrastructure was hit numerous times. Schools were targeted on at least 15 occasions, while hospitals and medical centres were struck at least nine times. This targeting of civilian infrastructure by Assad and Russia was not new. According to the World Health Organisation, there have been 83 attacks on healthcare facilities in Syria since April 2019.

The Idlib campaign triggered a widespread displacement crisis in northern Syria. By the end of the assault, at least 980,000 people, most of them women and children, were forced to flee the violence. According to Mark Lowcock, UN Under-Secretary General for Humanitarian Affairs, these displaced people were struggling to survive in what he described as “horrific conditions”. 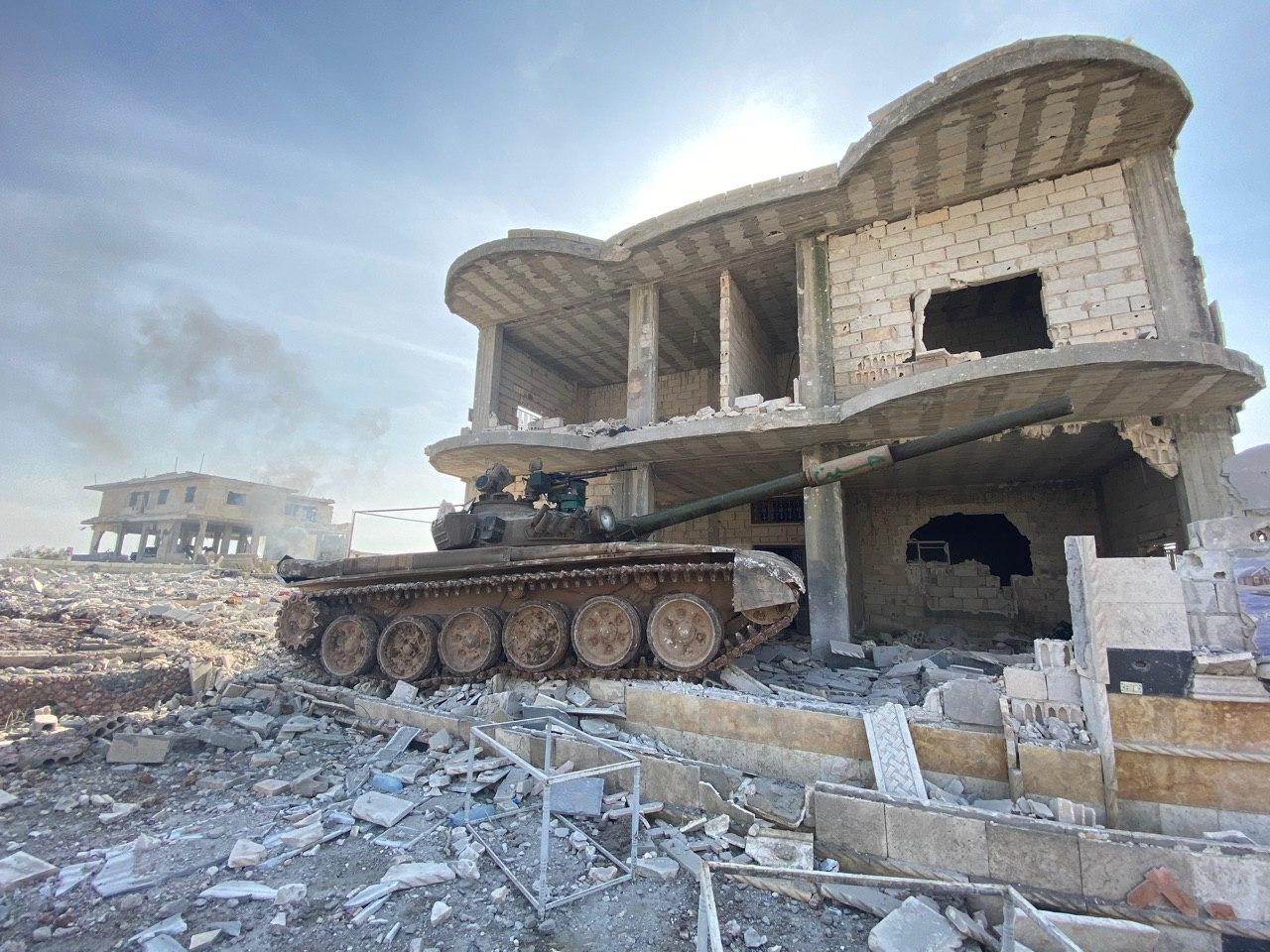 Tank rolling through ruins in Maarat Numan (via Oleg Blokhin).

The fighting in Idlib eventually stopped after Turkey escalated its own operations against pro-Assad government forces, following a devastating airstrike on a Turkish infantry battalion on the road between al-Bara and Balyun, which had left 32 Turkish soldiers dead and many others wounded.

Following this event, Ankara took the bold decision to intervene directly on the side of the rebels. The ferociousness of Turkey’s intervention was unprecedented, with Turkish forces launching a barrage of attacks on pro-regime positions, destroying dozens of military vehicles, equipment and several Russian-made air defence systems. These attacks devastated the Syrian Government, with the Syrian Observatory for Human Rights reporting that 170 pro-regime forces died. Turkish defence minister Hulusi Akar put the toll far higher – claiming that Turkish forces had destroyed two Syrian Su-24 fighter jets, two drones, 135 tanks, and five air defence systems; and had “neutralised” more than 2,500 fighters loyal to the Syrian government.

The risk of being embroiled in an all-out confrontation with Turkey forced the hands of both the Syrian and Russian governments, and prompted a formal ceasefire agreement between Presidents Recep Tayyip Erdogan of Turkey and Vladmir Putin of Russia. While the eventual ceasefire provided a much-needed respite for civilians in northwestern Syria, millions continued to suffer from the after-effects of the brutal campaign. And with the COVID-19 pandemic showing no signs of abating in the region, refugees from the violence in Syria, clustered into overcrowded camps, may remain most at risk of suffering from the virus.

Khlebnikov at RIAC says he does not, however, think the Covid-19 crisis was the main driver of the ceasefire: “I wouldn’t say it is a game-changer or a strong factor in this ceasefire. The Ukraine crisis did not impact Russia’s foreign policy, even though the economy was under great distress. So why would Covid-19? It might affect the intensity of the conflict in the long run, and it slows things down because diplomats and leaders are unable to meet in person.”

Elizabeth Tsurkov, a research fellow at the Foreign Policy Research Institute and a Syria expert, agrees: “I don’t think the Covid-19 crisis impacted the calculations of the warring parties in this conflict.”

That the ceasefire has lasted following the Covid-19 outbreak might seem paradoxical, given that both Russia and Turkey recently increased their involvement in Libya. However, those contributions are relatively small for now, compared to Syria. That said, the conflict in Libya has become both interlinked with Syria – with Russia and Turkey again on opposite sides – and also a continuation of the civil war on different soil, as Syrian mercenaries recruited by both Turkey and Russia now fight each other in the Maghreb. Talks between Moscow and Ankara to explore a deal that might see the fates of Syria and Libya connected have been put off for now. 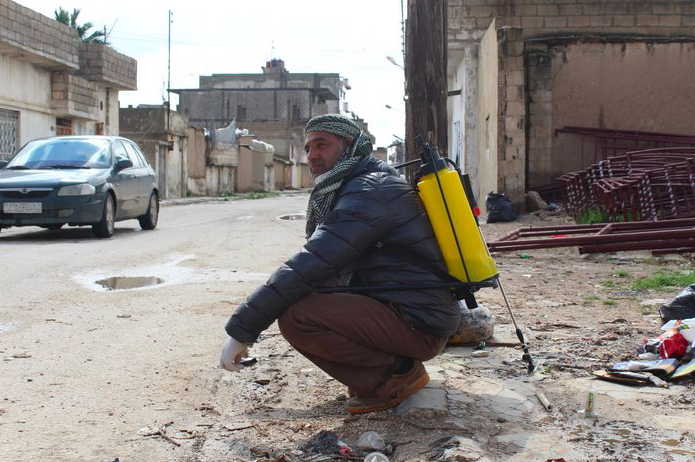 “Costs of violating the ceasefire are much higher now”

Previous Syria ceasefires have been fairly short-lived. So why is the Idlib pause still holding more than three months on? “The situation on the ground is different from two years ago. Idlib is now the only lasting stronghold of opposition armed groups and terrorists. And a ceasefire during a civil war, it is not a literal thing. There are certain violations,” asserts Khlebnikov.

According to his own estimates, there were 80 violations of the ceasefire in the first half of May. Even so, Khlebnikov sees the ceasefire as quite successful: “Since March 5th, the violence fell significantly. The first [joint Russian and Turkish] patrols were 5 or 7 kilometres long, now they are 45 kilometres long. This builds trust; and the Russian and Turkish militaries are getting used to interacting with each other on hostile ground. That creates a certain restraint for [other] armed groups to escalate.”

Mangott also views the results of the ceasefire as so far positive: “I think it will last. Russia is in a difficult economic and financial situation, the GDP will drop by 10% this year. There will probably be a drop in military spending. The current spending priority is on social causes [at home] to take care of the economic crisis, so there is no money for an escalation in Syria.”

In mid June there were some reports of violations of the ceasefire, with Russian airstrikes on Idlib and reports of civilian casualties. These appeared to be in retaliation for attempts by the HTS to seize several villages, and attack Russian targets, however. Dr Elizabeth Tsurkov remains positive: “This is the first time in the history of ceasefires in Syria when Russia and the regime will be punished for violating it. Turkish drones will be up the skies, killing soldiers. The costs will be much higher for them. It is difficult to make predictions, because there are too many uncertain factors right now, also looking at the elections in the US coming up. But I think the ceasefire will last for the rest of 2020.”

Tsurkov adds: “The area north of the M4 highway will remain out of regime hands for the foreseeable future. Until a deal is reached, the area will essentially be annexed into Turkey. We are already seeing the dynamics of that in northern Aleppo.”

Amplifying fears in Damascus of a de facto annexation, in mid June Turkish-backed opposition groups introduced the Turkish Lira and the US dollar as local currencies in cities and towns across Idlib governorate in an effort, they claimed, to stabilise the local economy after the ongoing depreciation of the Syrian pound.

Whenever it might end, Khlebnikov sees the ongoing ceasefire between Russia, the regime and Turkey in northern Syria as a temporary solution: “It is definitely not a final solution. There are two options with the ceasefire: it will be cancelled, or updated. I don’t think there will be any major breaches.”

“On the other hand, there is a certain risk of escalation, because if Turkey won’t be able to deliver on its promises to clear the buffer zone, that may become a legitimate reason for Russia and the Syrian army to launch operations.” But, warns Khlebnikov: “In the last four months, Turkey allocated about 15.000 troops and upped military equipment. It is amassing its forces in Idlib. Any fight with Turkey will be a disaster for Russia.”

With a mass outbreak of the Covid-19 virus still threatening Syria – with its heavily weakened health care system after nearly a decade of war – a fight between Russia and Turkey on Syrian territory would not only carry great risk for Moscow. It is likely that Syrian civilians would bear the greatest losses, once again.