Intensity of Coalition’s Raqqa bombardment greater than for all of Afghanistan, official data shows

US-led Coalition forces are firing record numbers of bombs, missiles and artillery shells into besieged areas of Raqqa city – part of a bloody campaign to dislodge so-called Islamic State (ISIS) from its self proclaimed capital. The assault is also reportedly killing hundreds of trapped civilians every month – a charge the Coalition strenuously denies.

On average one Coalition bomb, missile or artillery round was fired into Raqqa every eight minutes during August, according to official data provided to Airwars. A total of 5,775 bombs, shells and missiles were launched by US-led forces into the city during the month in support of Syrian Democratic Forces (SDF) on the ground.

By way of comparison, US-led forces fired ten times more munitions into Raqqa during August than were released by US aircraft across all of Afghanistan for the same month (503), according to recent data issued by Air Force Central Command (AFCENT).

The SDF is now in the fourth month of a slow and bloody battle to seize Raqqa from ISIS. Yet even after announcing the capture of more than half of the city, Coalition data shows record numbers of munitions being fired – higher even than were loosed in any one month (5,500 in March) during the tough fight for West Mosul, an area far larger than Raqqa.

The intensity of the air and artillery bombardment on Raqqa – primarily by US forces – closely correlates with high casualty reports on the ground. In July, munition use and likely civilian casualties from Coalition strikes in Raqqa fell by 32 percent and 33 percent respectively. In August both munition use and reported casuialties rose steeply again.

Airwars monitoring indicates that at least 433 civilians likely died as a result of Coalition actions at Raqqa during August — more than double the number of estimated fatalities the previous month. In total more than 1,000 civilians have now credibly been reported killed since the assault began on June 6th, according to Airwars monitoring. The UN reports that an estimated 25,000 civilians remain trapped in Raqqa, prevented from fleeing by ISIS. Much of the city’s infrastructure, including its medical system, has also largely being reduced to rubble.

On September 19th, the Coalition told Airwars that its own estimates were that between 15,000 and 18,000 civilians still remained inside the city under ISIS control. Officials say the civilians should leave the city if possible. “If they can do so safely, the SDF has instructed civilians to flee their homes to SDF-controlled areas of Syria for relocation to IDP camps,” said Coalition spokesman Col. Thomas Veale.

International agencies and NGOs are urging the US and its allies to do far more to protect from harm those civilians still trapped at Raqqa. “Using explosive weapons such as bombs and missiles in populated areas poses a predictable risk to civilians,” said Ole Solvang, deputy director of the emergencies division at Human Rights Watch. “The amount of munitions the coalition is firing into Raqqa raises serious concerns whether the coalition is taking all feasible precautions to minimize civilian casualties.” 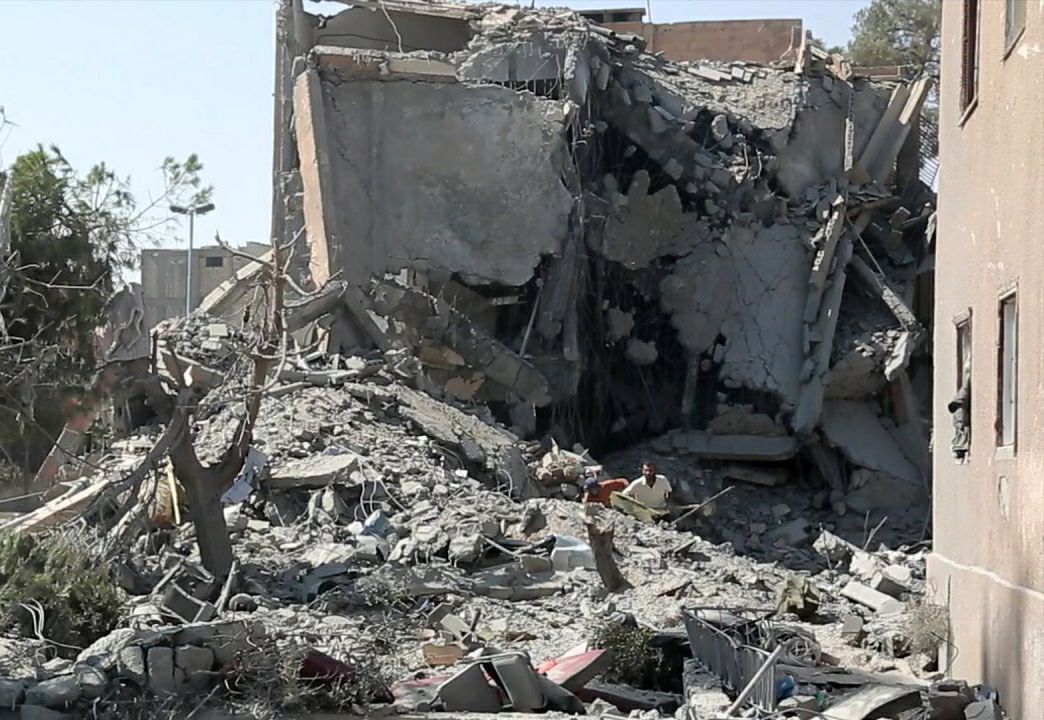 Aftermath of an alleged Coalition strike on Raqqa’s Malahi neighbourhood, which was reported to have killed up to 40 civilians, August 22nd 2017 (via Raqqa is Being Slaughtered Silently)

Among those credibly reported by local monitors as killed in August at Raqqa were at least 74 children and 62 women — both estimates up considerably from the previous month. To date, more than 180 children have likely been killed in Coalition air and artillery strikes since June 6th, according to an Airwars assessment.

The Coalition – which has so far conceded only four civilian deaths during the battle for Raqqa – maintains that despite the surge in munition use, the minimizing of civilian casualties is their top concern. The uptick in bombs and missiles, said a Coalition’s spokesperson, was a product of “operational need and will ebb and flow as the operation does.”

“The number of strikes and munitions also vary based on several other factors, such as the number of available targets, partner force operational tempo, enemy movement, and the weather,” said Col Veale. “The Coalition adheres to strict targeting processes and procedures aimed to minimize risks to non-combatants.”

“The avoidance of civilian casualties is our highest priority when conducting strikes against legitimate military targets with precision munitions, unlike the indiscriminate nature of ISIS tactics which result in an enormous number of avoidable civilian deaths,” Veale wrote in a statement to Airwars. “The Coalition will not abandon our commitment to our partners because of ISIS’s inhuman tactics terrorizing civilians, using human shields, and fighting from protected sites such as schools, hospitals, religious sites and civilian neighborhoods”

Read our full Coalition and Russia casualty assessment for August 2017

For its part, ISIS has been repeatedly documented as placing civilians in extreme danger. Non combatants are held against their will in areas under Coalition fire, with ISIS using them as so called ‘human shields.’ Civilians are also regularly fired on by ISIS fighters if they try to flee.

During the recent battle for Mosul, Amnesty International reported that civilians were welded into homes, or ringed with booby traps. Those attempting to escape were often killed. In a recent response to Airwars research, the outgoing Coalition commander Lt. Gen. Stephen J. Townsend cited such tactics.

“They booby trap houses, they weld doors shut to hold civilians hostage, and they shoot civilians that attempt to flee to the safety of our partners’ lines,” he wrote.

According to Raqqa researchers at the NGO Physicians for Human Rights, civilians are afraid to leave their homes — even if it is to retrieve a wounded civilian or dead body.

“Right now, our contacts on the ground are merely begging for time between the relentless bombings to at least be able to retrieve their wounded or dead family members from the rubble,” said Racha Mouawieh, lead Syrian researcher at Physicians for Human Rights. “Because Raqqa is ISIS’ self-proclaimed capital and main stronghold, coalition forces seem to feel they can totally disregard the lives and dignity of people trapped there.”

“ISIS has turned buildings that were once hospitals, mosques, and schools into headquarters and weapons caches to take advantage of their protected status,” said Col. Veale. “In accordance with the law of armed conflict, the Coalition strikes only valid military targets, after considering the principles of military necessity, humanity, proportionality, and distinction.”

"Al-Mansor street" downtown #Raqqa. The area has been targeted by tens of airstrikes during the last three months.#ISIS #SDF @Coalition pic.twitter.com/k2Napy5ccK

Civilian suffering at Raqqa has been well documented by local monitors such as the Syrian Network for Human Rights and Raqqa is Being Slaugtered Silently. Recent field investigations by Amnesty International and the UN-mandated Commission of Inquiry on Syria have also raised significant concerns, as has the United Nations High Commissioner for Human Rights – who recently warned that civilians at Raqqa “are paying an unacceptable price and that forces involved in battling ISIL are losing sight of the ultimate goal of this battle.“

In late August, reports grew so dire that UN humanitarian advisor Jan Egeland took the rare step of asking all sides to consider a humanitarian pause in Raqqa. The Coalition pushed back, saying operations would not be slowed and arguing that the faster the campaign was concluded, the more civilians would ultimately be saved.

The Coalition has also aggressively challenged reports of high civilian casualties from its actions – with senior officials publicly attacking Amnesty International; the Commission of Inquiry for Syria; and most recently Airwars.

Yet even the Coalition’s own reporting shows civilian fatalities in conceded incidents have doubled since Donald Trump took office eight months ago. That same official data shows that an average of 5.2 civilians are being killed in each admitted event under President Trump’s leadership – compared with an average of 3.1 civilians killed per event with Barack Obama at the helm. Airwars has recorded similar trends, though at far higher levels. As of September 14th, it estimates that at least 5,300 civilians had likely been killed by Coalition actions in both Iraq and and Syria since 2014. The majority of those reported deaths occurred during Trump’s leadership of the Coalition.

The unrelenting tempo of strikes in Raqqa may reflect the so called “annihilation tactics” put in place for counter-ISIS operations by Trump’s administration. “As we lift restrictions and expand authorities in the field, we are already seeing dramatic results in the campaign to defeat ISIS,” Trump said in an August 21st speech. Recent reports suggest the SDF has captured significant portions of Raqqa in recent days.

‘If they are not liberated they will surely die’

Shortly after handing over command of the Coalition at the start of September, Lt. Gen. Stephen J. Townsend penned an extensive response to an earlier Airwars article jointly published with Foreign Policy. Townsend took issue with Airwars’ methodology, but also explained the Coalition’s strategy in Raqqa:

“There is no doubt that civilians are at risk every day from ISIS, our partner forces’ operations to defeat ISIS, and Coalition strikes in support of them,” wrote Townsend. “As the battle intensifies in the heart of Raqqah, more civilians will be at risk as ISIS holds them hostage and refuses to let them flee. However, if they are not liberated they will also surely die, either at the hands of ISIS or from starvation.”

But that strategy – and the significant reported civilian toll in Coalition-backed operations to capture ISIS-held cities – has caught the attention of some American military experts, who say the present offensive approach to urban battles needs to be rethought.

“Because we don’t understand cities nearly as well as we could and have demonstrated that we know even less about how to optimize military actions in them, we are like medieval doctors, lobotomizing patients and letting their blood without improving their health and too often causing death or such life-long damage that the patient survives as only a dysfunctional shadow of itself,” wrote John Spencer and John Amble of West Point’s Modern War Institute, in an analysis published in September.

“We cause incredible disruption and even destruction, but without any research-based evidence that these efforts will save the city.”

As the SDF further consolidates control over Raqqa, some international journalists have recently been able to send dispatches from inside the city. They report devastation. “24 hours of coverage still wouldn’t do justice to the total destruction across Raqqa,” tweeted veteran BBC Middle East Correspondent Quentin Sommerville. “I’ve never seen anything like it.”

24 hours of coverage still wouldn't do justice to the total devastation across Raqqa. I've never seen anything like it. pic.twitter.com/rYS1y7mGxy

▲ The aftermath of an alleged Coalition strike on Raqqa's Bedo neighbourhood, Aug 20th (via Euphrates Post)