Russian airstrikes and civilian deaths in Syria are rising fast

More civilians are reportedly dying as a result of Russian airstrikes in Syria than at any time since the fall of east Aleppo, the latest Airwars research indicates. Heavy Russian backing for ongoing Assad regime campaigns in Aleppo, Hama and Idlib governorates has led to rebel groups being pushed back and scores of civilians killed.

For the first three months of 2017, the US-led Coalition was likely responsible for a greater number of civilian deaths in Iraq and Syria than Russia’s campaign in support of the Assad regime. That grim metric reflected both a reduction in the number of Russian strikes, and a stepped up and deadlier Coalition campaign around Mosul and Raqqa. However, new analysis by Airwars researchers indicates Russian strikes are once more on the increase, allegedly killing hundreds of additional civilians.

Alleged Russian civilian casualty incidents nearly doubled between February and March, rising from 60 to 114 events. Already in April at least 120 events have been tracked. Due to a backlog of cases it will be some time before Airwars researchers can more fully vet these allegations, though such event tracking has previously proved a helpful guide to the tempo of Russian actions. 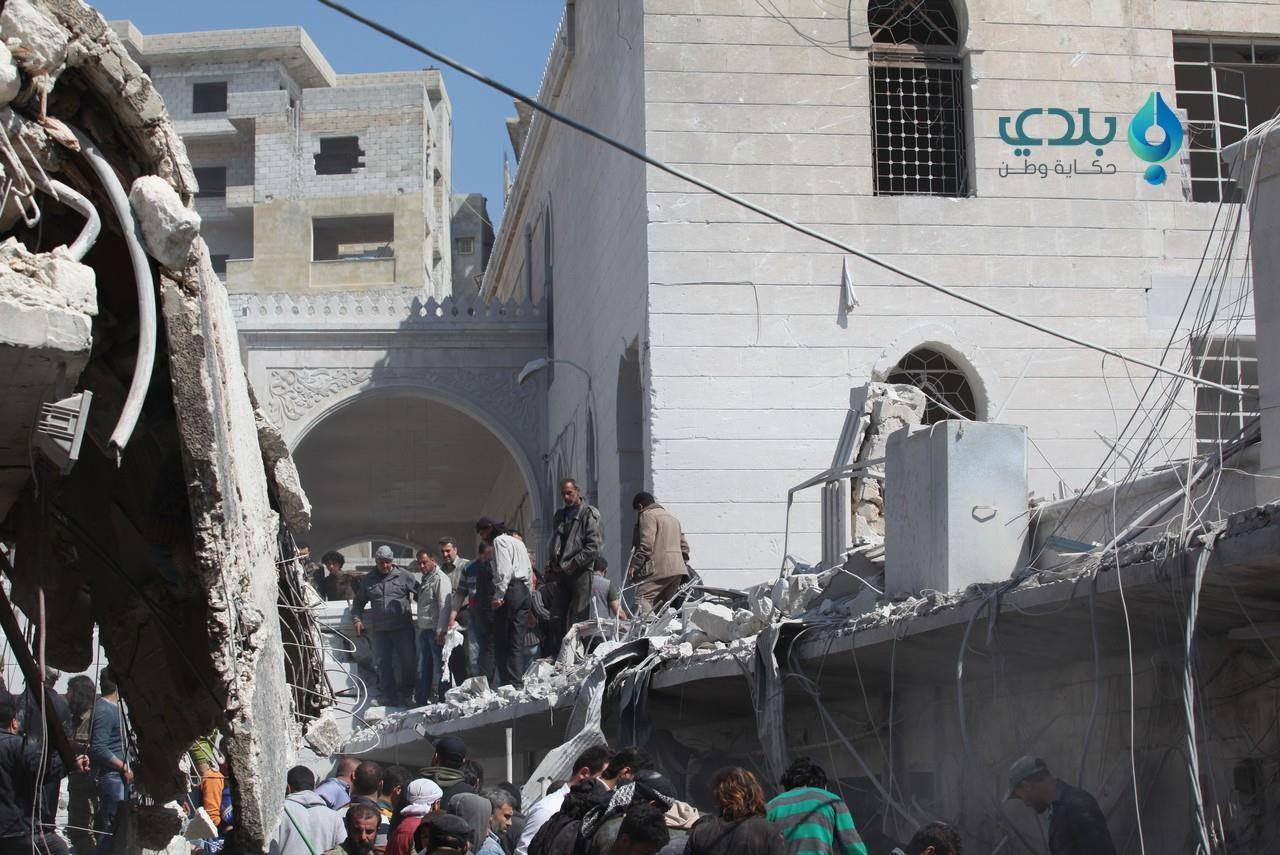 Several important developments have coincided with this stepped-up air assault. In mid-March, Russia-backed peace talks in the Kazakh capital of Astana broke down. And on April 4th, more than 90 people were killed in the town of Khan Sheikhoun in Idlib by what the Organization for the Prohibition of Chemical Weapons has determined  was an attack that used Sarin. Western countries, including the US, UK and France have all blamed the regime.

What was likely the deadliest Russian strike in recent weeks took place later that same April day in Salqeen, Idlib. The Syrian Network For Human Rights has described the attack as a “massacre.” A subsequent report from Smart News Agency, said that 26 civilians were killed, “including 17 children and five women.”

At least 16 victims were identified, and 11 named by outlets that cited local civil defense officials. Among the named children were Abdul Rahman Mohammed; Satoof Al Kango; Nihad Nemour; Mohammed Nemour; and Mustafa Nemour. Many of the dead were reportedly from the same family. Images showed the rubble of several buildings in what was described as a residential neighbourhood. The Idlib Media Center later posted on Facebook that the death toll had risen to 37, though this could not be confirmed.

Also on April 4th, suspected Russian planes left at least nine civilians dead including children at Sabqa, a city located in Damascus governorate. Pictures following the attack showed rescuers digging amidst the remnants of what were refered to as residential structures.

Four days later on April 8th, troubling reports emerged from Orm al-Jouz in Idlib, where at least 14 civilians were allegedly killed. The Syrian Observatory put the toll higher at 20 people, “including 5 children and 2 women” who perished in suspected Russian strikes. The Syrian Network reported that cluster munitions were used in the attack. 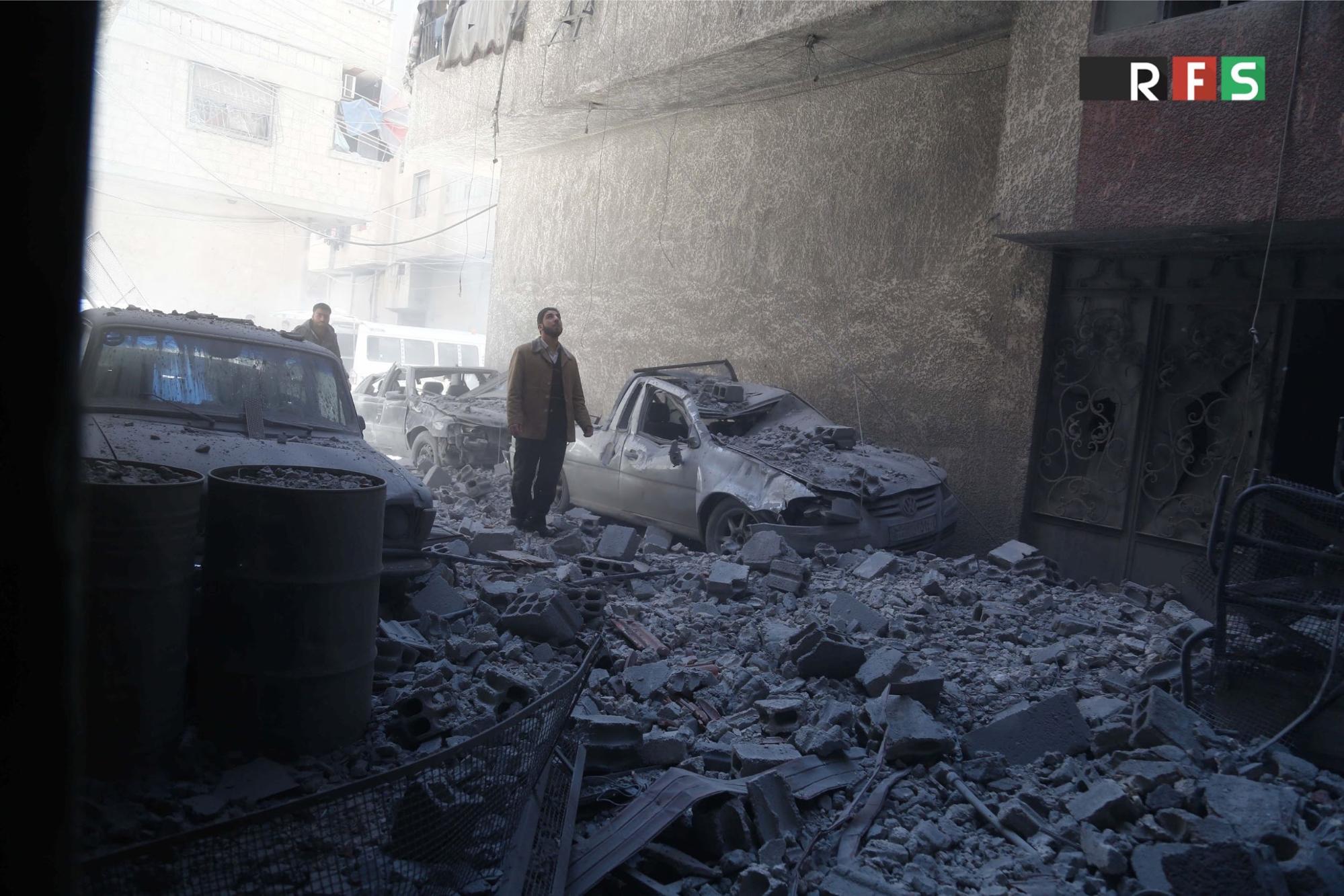 A man stands in the rubble of a suspected Russian strike in Sabqa, April 4th. (via RFS Media Office.)

These latest alleged Russian incidents are not isolated cases. In the first three weeks of April, Airwars monitored more than 100 reported civilian casualty events tied to Russian strikes — similar to the pace seen in the first months of 2016, when Russia was accused of killing hundreds on a weekly basis. Most strikes today are in Idlib governorate, though Russia is also bombing near Hama and Damascus. Approximately 60 civilians a week are presently being alleged killed in Russian actions.

Russia’s strikes in Syria, along with those of the regime, have been described by groups like Human Rights Watch as at times amounting to war crimes. In less than eight months, from September 2015 through April 2016, Airwars researchers were able to identify nearly 800 alleged civilian casualty events tied to Russian strikes. Over 4,000 victims were identified and named in local reports and by casualty recorders as a result of alleged Russian incidents. In January 2016 alone, Russia likely killed over 700 non-combatants in Syria. Due to severe resource pressures, Airwars researchers have not been able to fully vet most Russian strikes since then.

Though Russia has continued to bomb Syria, the number of incidents tied to Moscow has lessened at times, particularly after the regime was able to recapture rebel-held areas in Aleppo city — an operation that was backed by blistering and deadly Russian airstrikes which targeted hospitals and other non-military sites. And as with previous Russian-supported ceasefire efforts, relatively fewer incidents were recorded after the start of talks in Astana in February 2017. As Airwars noted in its analysis for that month, those meetings involving Turkey, Iran and Russia as well as some opposition forces coincided with “relatively lower than expected” number of allegations against Moscow.

Many of the alleged incidents pointing to Russia also blamed the Assad regime, with sources often unable to distinguish the perpetrator. And with t5he collapse of the Astana talks, reported Russian and regime strikes both jumped steeply upwards.

On April 7th the Trump administration launched 59 Tomahawk missiles at a Syrian airbase – a response it said to the Assad regime’s use of chemical weapons. Yet airstrikes by both the regime and Russia have continued, including near Khan Sheikhoun itself. Though chemical weapons have garnered international attention, attacks with regular bombs and missiles continue to claim the greater majority of civilian deaths from airstrikes. 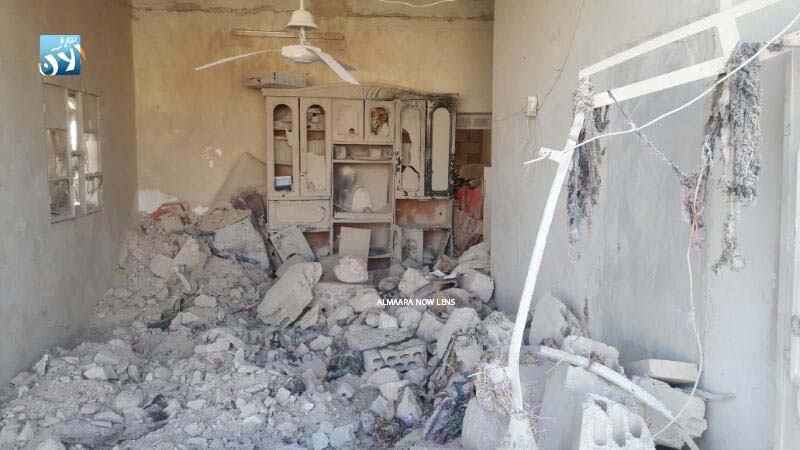 A home lies in ruins after a suspected Russian strike in Heesh on April 7th. (via Maara-now.)

In the twelve days after the US struck the regime, the Syrian Network nevertheless recorded 78 civilian deaths from Russian airstrikes, including 21 children and 11 women. Out of 15 attacks, 12 made use of incendiary weapons, and 6 used cluster munitions, said Abdul Ghany.

Genevieve Casagrande, a Syria research analyst at the Institute for the Study of War, says the recent strikes follow a pattern of targeting civilians – “part and parcel” of how Russia has operated at times of rebel offensives, in this instance, operations spearheaded by Hayat Tahrir al-Sham. A recent analysis published by the Washington Institute similarly painted the April 4th chemical weapons attack as a response to militant advances, including near Hama.

“Russia will tend to target rear areas at moments of opposition offensives as a way to both punish the civilian population in rebel held terrain, deter additional support, as well as hit any opposition reinforcements… and draw some of the opposition forces back into Idlib,” said Casagrande.