Seeing through the rubble: Airwars and PAX launch joint report

Airwars and PAX have published a new joint report, Seeing Through The Rubble, examining the dire and long-lasting effects of explosive weapons on civilian populations in urban areas in recent international military campaigns in Mosul, Raqqa and Hawijah. The report calls upon States to develop and support an international political declaration to better protect civilians against the use of explosive weapons in populated areas.

The report was launched at a virtual event on October 26th. Ambassador Michael Gaffey of Ireland, which is spearheading efforts to create an international consensus on limiting the use of explosive weapons in cities, told participants: “We would not have reached the point of acceptance for the need for a political declaration [on explosive weapons] if it was not because of the work of civil society organisations. Their research and advocacy are vital to the process.”

The new report concludes that ‘precision’ when using explosive weapons in urban areas is not the key determinant of civilian harm. “Rather”, write the authors, “it is the wide area effect of an explosive weapon in relation to the proximity of civilians in populated areas.”

The PAX and Airwars report furthermore concludes that the cases of Mosul, Raqqah and Hawijah show that States acting in accordance with International Humanitarian Law is not enough in itself to prevent immense civilian harm and civilian suffering when explosive weapons are deployed in populated areas.

Co-author of the report Roos Boer, programme leader of the Humanitarian Disarmament programme at Dutch peace organisation PAX, states: “Large aircraft bombs and heavy artillery are intended for open battlefields. When bombing and shelling take place in towns and cities, civilians are killed and suffer life-changing injuries, and vital infrastructure like hospitals and schools are destroyed. We need to see states agree to stronger rules that will stop these urban attacks.”

According to data monitoring by Action on Armed Violence (AOAV), 92 per cent of the 19,401 civilian deaths and injuries tracked by the organisation from the worldwide use of explosive weapons in 2019 occurred in urban areas. Furthermore, AOAV concludes that when explosive weapons, such as artillery, grenades, missiles, rockets and aircraft bombs, are used in towns and cities, nine out of ten casualties are civilians.

Explosive weapons are a major driver of forced displacement of civilians – not only because of fear of death and injury and the destruction of homes, but also because of their devastating impact on critical infrastructure services such as health care, education and water and sanitation services.

Two nations particularly affected by recent urban fighting are Iraq and Syria. While a variety of actors have caused major civilian harm and widespread destruction in both countries, the report focuses on military operations by the US-led International Coalition against ISIS. Using publicly available sources, the report analyses the short- and long-term effects of the use of explosive weapons in Mosul, Raqqa and Hawijah.

These cases illustrate that the effects of explosive weapons continue long after the bombs have exploded. In Mosul, the costs of the 2016-17 campaign to drive ISIS out of the city were high: at least 9,000 civilians were reportedly killed in the fighting. Around 700,000 Moslawis were displaced; and city officials have stated that 80 per cent of the inner city’s buildings were destroyed.

In June 2019, the UN International Organisation for Migration (IOM) reported that entire neighbourhoods of Mosul had yet to be rebuilt and that a lack of essential services and poor sanitation were still threatening public health. Additionally, unexploded bombs, missiles, rockets and shells prevented civilians from returning to the city. 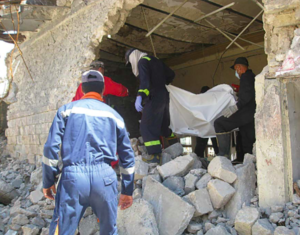 A federal Iraqi recovery team removes a body from the ruins of west Mosul, May 2018. (Image courtesy of Mosul Eye).

Seeing Through The Rubble also adds fresh information on the current situation in Hawijah. Six different sources, including Hawijah’s mayor, were interviewed for the report on the recent state of the city after a devastating 2015 Dutch airstrike on an ISIS IED factory, leading to the deaths of at least 70 civilians and hundreds more injured.

The report estimates that the secondary explosions triggered by the Dutch airstrike damaged between 400 and 500 buildings in the area, including many shops, homes and schools. Sources also reported that the airstrike caused major damage to crucial infrastructure, including roads and water pipelines.

According to the Mayor of Hawijah, Subhan Al Jabouri, less than 40 per cent of the buildings have been rebuilt and much rubble remains. The industrial area in Hawijah still suffers from a shortage of water and electricity.

Chris Woods, director of Airwars and a co-author of the report along with Laurie Treffers and Roos Boer, notes: “In highlighting the negative consequences for civilians of recent Western military interventions at Mosul, Hawijah and Raqqa, our new report demonstrates why militaries can’t rely simply upon compliance with the laws of war when trying to reduce civilian casualties during urban fighting. Large scale civilian harm during city battles is a terrible reality – and greater international safeguards are urgently needed.”

Since 2019, Ireland has been leading a series of consultations in Geneva, aimed at drawing up an international political declaration to ban the use of explosive weapons in urban areas. The International Network on Explosive Weapons (INEW), a network of NGOs, urges states to take immediate action to prevent human suffering from the use of explosive weapons in populated areas. “These case studies show once again the unacceptably high levels of civilian casualties and destruction as a result of bombing and shelling in cities and other populated areas,” says Laura Boillot, coordinator of INEW, responding to the new report.

“Every year we see tens of thousands of civilians killed and injured, that suffer psychological trauma, and are forced to flee for safety. Cities are being torn apart – housing, hospitals, schools and vital infrastructure is destroyed which has disastrous consequences for the survival and wellbeing of the people that live there”, continues Boillot.

“This pattern of civilian harm should not be considered an inevitable consequence of war. Using heavy explosive weapons such as heavy artillery, multi-barrel rocket launchers and large bombs and missiles in populated areas – even against military targets – is not acceptable and must stop.”