The siege of Tripoli: visualising a year of violence

Civilian casualty situation at the beginning of the LNA's Tripoli offensive on April 4th, 2019
Web link

Two months after the brutal siege of Libya’s capital ended, new interactive Airwars mapping shows the impact of 14 months of fighting between two rival governments on the city’s beleaguered civilians.

Airwars has visualised every allegation of civilian harm from air and artillery strikes during the period of war in and around Tripoli between April 2019 and June 2020. Glasgow-based consultants Rectangle designed the innovative mapping, in an effort to find fresh ways of visualising civilian harm on the modern battlefield.

The map utilises a 1km radius hexagonal system, whose height represents the number of civilians reported killed in an incident. This in turn enables users to see the extent of shelling on various neighbourhoods, with casualty spikes clearly revealed in heavily hit areas such as Salaheddin, Abu Salim and Tajoura. The new mapping can also be used as a portal to access individual civilian harm assessments on the Airwars website.

Lizzie Malcolm and Daniel Powers of design consultancy Rectangle explain their rationale behind the new approach: “The challenge of mapping and visualising civilian harm is to balance the presentation of aggregated information and individual details. Maps of large areas and timelines of conflicts are useful for understanding scale. But any visualisation should be a gateway to the evidence and stories about individuals and families,” they tell Airwars.

Over the course of the siege, Airwars recorded 339 civilian harm events in Libya, 197 of which around Tripoli, nearly tripling the number of locally reported incidents since the end of the NATO campaign in 2011. At least 197 civilians were killed by the violence and another 537 were injured by the violence, as the LNA and GNA fought for control of Tripoli.

The LNA’s Tripoli offensive introduced Libyans to a degree of conflict violence not seen since NATO’s intervention almost a decade earlier. Even when the conflict was over, LNA forces and Wagner mercenaries reportedly booby-trapped houses and planted landmines, leading to gruesome additional reports of killed and injured civilians.

The siege of Tripoli has previously been visualised by other organisations, though not via an interactive map. UN agency OCHA has for example provided infographics summing up their findings. And Dzsihad Hadelli has previously visualised Airwars data on civilian casualties for the Libya Observer.

The war on Tripoli is now one year old. But already in this period, as many civilians have been killed by air raids as in all Libyan civil war conflicts since 2012 (Airwars annual report 2020).

Here's a map of all reported air strikes/shellings of the last 12 months. pic.twitter.com/tTYoEaaDSM

Mapping and recording harm in conflicts can help both with the proper investigation of civilian casualties, and of possible war crimes – potentially leading to reconciliation and justice in those parts of society affected by the fighting. “There is no way out of this without people being held accountable,“ says Elham Saudi, Director of Lawyers for Justice in Libya.

Her organisation seeks to document violations of humanitarian and human rights law in Libya, in turn hoping for accountability. “If you’re aiming for criminal responsibility, the threshold is really high. First hand accounts and witnesses are the most important thing,“ Saudi explains. Establishing the chain of command that leads to an event in question is another crucial point, she adds.

As a former resident of Tripoli suburbs, Saudi knows from friends and family what the siege did to Tripoli’s population: “The impact was felt throughout the city, the fear and anticipation of being targeted was quite overwhelming – even if you didn’t live in the areas being targeted, because of the indiscriminate nature of the attacks. You always felt like you were a target.”

However, her organisation does not focus only upon recent events around Tripoli but investigates violations committed in the civil war across the country. The highly polarised political landscape poses an additional challenge, as activists and media in Libya are often affiliated with one of the parties to the conflict: “The hyper-politicisation of everything makes it very difficult to keep the distance from what’s being said in the media. I don’t disregard anything just because it belongs to a certain party.”

“Things get lost if you don’t preserve evidence in a conflict. Preserving evidence is absolutely vital, it’s not just about the present but also about the future for civil society,“ the lawyer elaborates. Social media plays an increasing role there as “Perpetrators help you because they incriminate themselves.“

Mahmoud Werfalli’s arrest warrant from the International Criminal Court, for example, was based on social media accounts of extrajudicial killings. The former LNA commander is accused of executing ten prisoners in Benghazi in 2018, a case that was widely documented on social networks – as are many cases of potential war crimes in Libya.

At this point it remains difficult to predict which alleged incidents might potentially bear fruit in court. War crimes were alleged on both sides of the conflict. “The US is promising because Haftar, as a US citizen, is subject to its jurisdiction; it also allows for individuals to pursue civil responsibility,” Saudi says. Three civil lawsuits attempting to do that have been filed in the US for example, whereby affected families are suing the General for compensation for his alleged responsibility in the deaths of family members as a result of the indiscriminate shelling of Tripoli neighbourhoods by his forces. 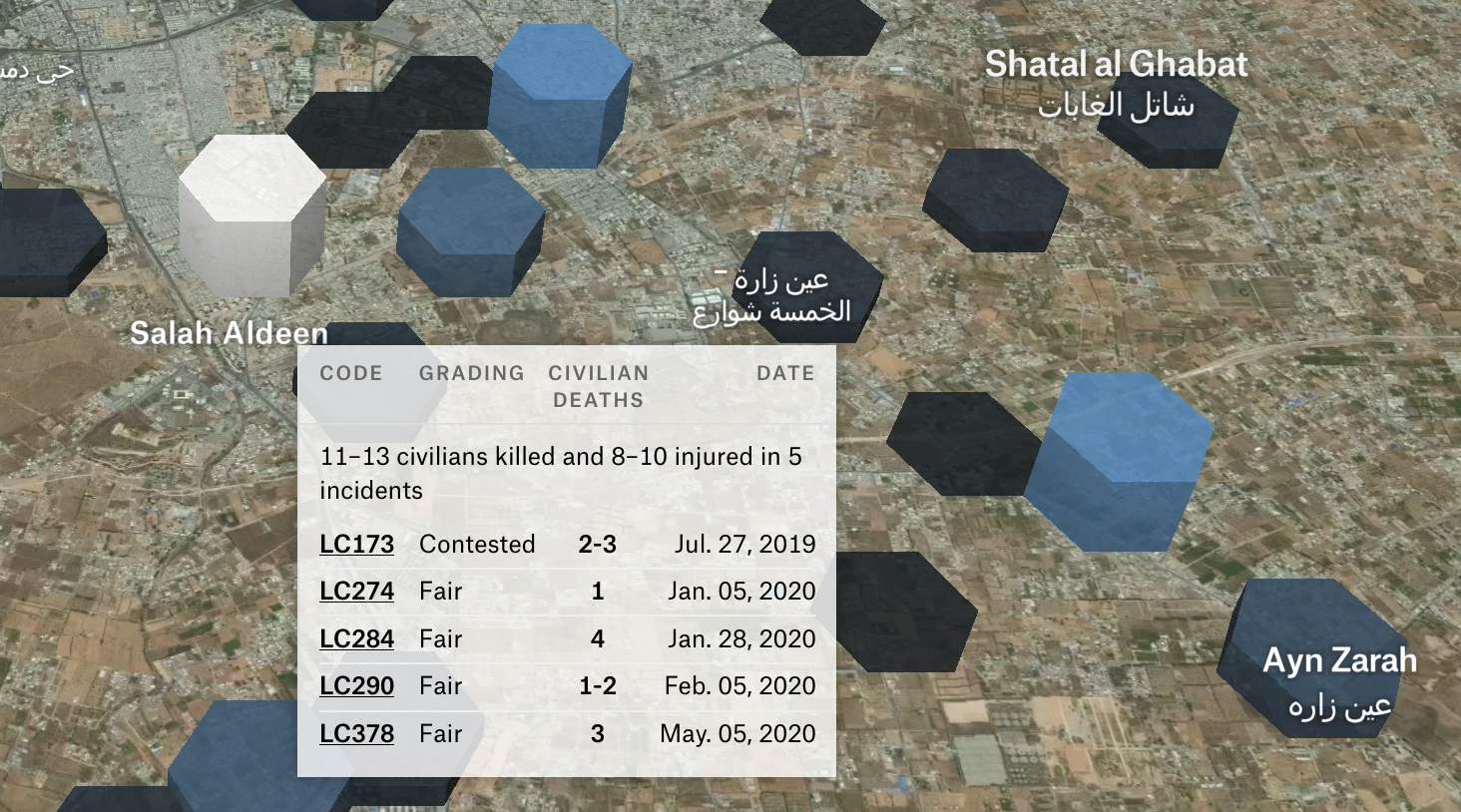 Bringing Libyans back to the negotiations table

Even as the search for accountability continues, rifts remain deep within Libyan society after so many years of civil war. The big question is: how might Libya finally find a way towards a peaceful future?

A pause in fighting between Libya’s rival camps might be expected to generate optimism in a country riven by intermittent civil war since 2011. But instead of improving the livelihoods of the population, both seem keen to return to the status quo that partly led to the siege of Tripoli in the first place. Infighting within both the Government of National Accord (GNA) and the Libyan National Army (LNA); profound economic problems; and deep distrust between all the main political actors, make a peaceful future more uncertain.

Recently popular protests erupted in both GNA- and LNA-controlled territories, that were in turn met with violence by both governments. At the same time, a new military build-up around Sirte has raised fears of another escalation in violence – while a dire economic situation exacerbated by the Covid-19 pandemic has pushed the population into ever deeper poverty.

Virginie Collombier, Professor of Social and Political Dynamics in Libya at the European University Institute of Florence, has been working on grassroots mediation processes led by Libyans for many years. She sees the first step to a lasting ceasefire taking place at the international level – getting countries now meddling in Libya to respect the commitments they made during the Berlin peace conference: “The aim of the mediation process is to find someone who has the capacities to provide guarantees and enforce things. The UN can’t do anything alone as we see; and the EU doesn’t have the capacities or willingness.“

“Who has the capacities to influence things on the ground: Russia? Turkey?“ Collombier asks.  Neither seems a likely candidate given the ongoing geopolitical struggle between these two states: “Most importantly [there is] the US, but will they work as a guarantor on broader issues related to the economy, and the political framework?“

The current stalemate may however make things easier, Professor Collombier believes: “There is clearly a sense of exhaustion, the meaning of the war is lost, which is something we can see on both sides of the divide.“ She adds: “There is not much we can achieve through violence and weapons, the situation has stabilised around two camps that can block each other.“

However, internal divisions in both the GNA and in Haftar’s camp show that the situation could turn violent again if issues are not resolved. Collombier stresses the need for a dialogue that includes all Libyans, beyond the GNA and LNA: “Voices of Libyans can be heard and put pressure on politics; and diversifying the political sphere is absolutely crucial. There is a need for alternative voices and leaders. There is deep distrust in the current political elite.”

Whatever the result of both reconciliation and accountability processes in Libya, there is a long way ahead for the country to finally find peace. Documenting and archiving the crimes committed during the civil war is only an initial step towards accountability that can then lead to reconciliation between former enemies.

▲ Civilian casualty situation at the beginning of the LNA's Tripoli offensive on April 4th, 2019