Despite less than two per cent of Coalition strikes taking place since the fall of Baghouz, civilian casualties persist

This article was originally published by The Quincy Institute for Responsible Statecraft on August 8th 2021.

For the little media coverage it receives these days, you might be forgiven for believing the US-led coalition’s war in Syria and Iraq to be over. Osama Al-Hamid’s family knows better. Last month, the young boy died during reported fighting between Washington’s local Syrian allies and the Islamic State, in which US airstrikes hit the building he was in. Osama was the latest of thousands of alleged victims of coalition strikes.

August 8th marked seven years since the international coalition, led by the United States, began its concerted bombing campaign against the Islamic State, the terrorist group that by 2014 had seized much of northern Iraq and Syria. Since then, the coalition has declared 34,987 strikes against the Islamist group. Today, ISIS has been reduced from a de facto state controlling territory roughly the size of Britain on either side of the Iraqi-Syrian border, to a few disparate cells living in hiding and conducting occasional terror attacks.

The final piece of ISIS territory, the town of Baghouz in eastern Syria, was recaptured in April 2019. Since then, the intensity of the international campaign has dropped dramatically. Only 483 strikes, or less than two percent of the war’s total, have taken place in the last two years.

The civilian toll has also dropped sharply. Of the 1,417 civilians the Operation Inherent Resolve, or OIR Coalition, has officially admitted killing since 2014, only one has occurred since Baghouz fell.

Airwars puts the real figures of civilians killed by coalition strikes far higher — at between 8,317 and 13,190 likely fatalities between 2014 and today. And since April 2019, between 57 and 112 civilians have been likely killed, the watchdog believes.

Yet despite the near destruction of ISIS, the coalition remains in place, even as President Joe Biden’s administration withdraws from Afghanistan, and claims to be looking to end the “forever wars.” The United States retains an estimated 900 troops in Syria and a further 2,500 in Iraq. Other nations have also seemingly increased the intensity of their involvement in the campaign in recent months. Of the 44 confirmed OIR airstrikes against the Islamic State this year, more than half were French or British. Belgium, which resumed its own involvement in the war in October 2020, has provided no data on its own recent strikes.

Seven years on, and with most of the war’s objectives seemingly achieved, what is to become of the anti-ISIS Coalition?

There are plenty of legitimate reasons for the Coalition to remain concerned.

Thousands of family members of ISIS militants, including those with British, French, and other citizenships, remain stuck in vast prisons in northern Syria, including the infamous Al-Hol camp near Hassakeh. With some countries unwilling to repatriate their nationals, violence in the camps remains a concern and there are fears the conditions could serve to radicalize a new generation of ISIS.

Outside the camps, fears of an ISIS resurgence remain, with periodic claims of their influence increasing. Recently, reports circulated that ISIS cells were forcing villagers in one part of eastern Syria to pay them money or face punishment. The US’s allies in Syria, the Syrian Democratic Forces, may not be able to cope without continued Western military support.

The Coalition is also yet to tackle its historic legacy, with rights groups and family members still seeking recompense for the thousands of civilians killed by its own actions. A recent report by Agence France Presse interviewed victims of the single worst disaster, when a U.S. strike killed more than 100 civilians in the Iraqi city of Mosul in March 2017, and found they were still waiting for compensation.

So there are arguments that supporters of the Coalition mission may may make in favour of staying. But bear in mind that just because it is not in the media that doesn’t make it a cost-free exercise — either financially for the US and partners, or for Syrian and Iraqi civilians. 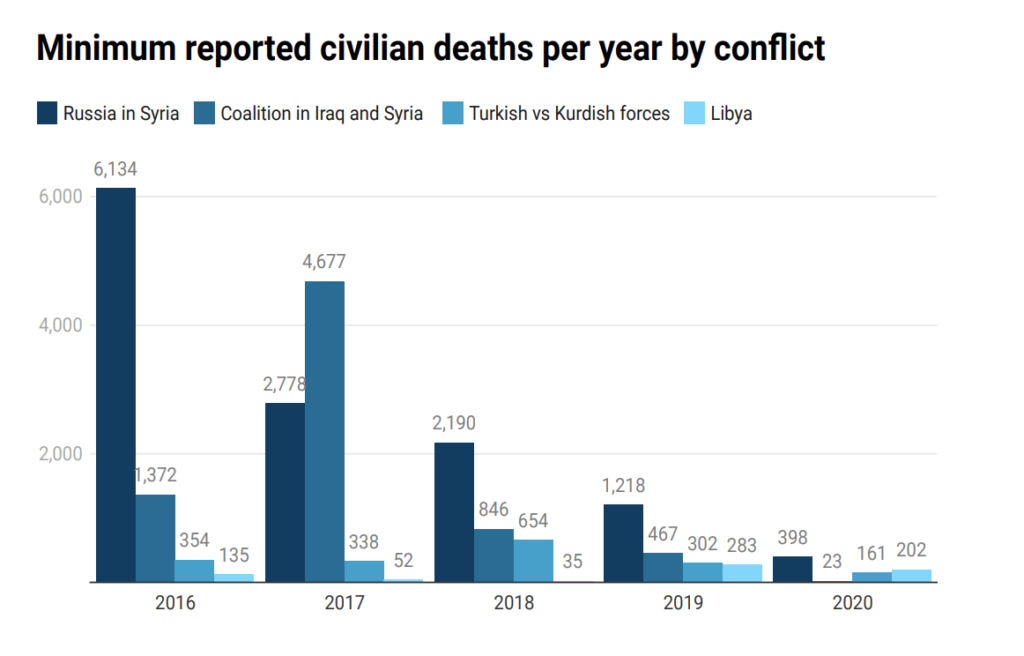 Last month, Osama Al-Hamid — who looks perhaps four or five in the images posted online of him — tragically died. The exact circumstances of his death, in Kharbet Al Janous near Hassakeh in northern Syria on July 21st, are disputed. What is clear is that the United States carried out two airstrikes against alleged ISIS members while supporting the SDF. Somewhere along the way Hamid was killed. The Coalition’s spokesman said the child was being “held captive” by ISIS, but provided no evidence for the claim.

The intensity of Syria’s civil war more generally has dipped significantly in recent years. Airwars data shows that the number of civilians reported killed last year was roughly a third of the tally during 2019. And as the level of violence decreases, so the questions that leaders have to ask themselves shift.

With US, Russian, Turkish, Iranian and other forces seemingly becoming permanent fixtures in Syria, the potential for fatal miscalculation remains. And with no clear long-term strategy currently being articulated by the Biden administration, there remains a risk of another grinding conflict with no end in sight.

In Iraq, the US-led coalition often found itself fighting alongside Iranian-backed militias during the height of the campaign against ISIS. Yet since the Caliphate’s decline, some of those same groups have begun turning their ire on US bases, particularly as tensions with Tehran again escalate. In another echo of the earlier US-UK occupation of Iraq, Shia politicians from across the spectrum increasingly call on the Americans to leave.

When President Obama withdrew from Iraq in 2011 at the insistence of the Iraqi government, he later faced allegations that his purported hasty exit helped lead to the emergence of ISIS. Biden will be wary of repeating the mistake. But he is also perhaps learning from Afghanistan that there is no perfect time to end a war. Maintaining the coalition in perpetuity in Iraq and Syria, against an elusive foe, brings with it a risk of a new forever war.

▲ US soldiers make their way to an oil production facility to meet with its management team, in Syria, Oct. 27, 2020. (Credit: U.S. Army photo by Spc. Jensen Guillory)