Airwars has launched a major new online resource for Somalia, providing the most comprehensive look yet at more than a decade of US counterterrorism actions in eastern Africa, and associated civilian harm claims.

The nine month review has identified significantly higher levels of locally reported civilian harm than previously thought, with up to 280 non combatants alleged killed in US actions since 2007. Declared US actions and reported militant deaths are also sharply up.

In Spring 2019, Airwars took over from the Bureau of Investigative Journalism its own long running monitoring of US drone strikes and civilian harm in Somalia, Yemen and Pakistan, with some Somalia events dating back as far as 2007. The first step was to bring event monitoring across to Airwars’ own standards. Over nine months, the team comprehensively reviewed several hundred declared and alleged US airstrikes and ground actions in Somalia, and 61 claimed civilian casualty incidents.

Event assessments were also significantly reoriented towards local Somali voices, adding many hundreds of new sources – including videos, photos, and social media posts. Airwars also worked closely with other NGOs, researchers and investigative reporters to ensure that their own important findings were incorporated.

The result is the most comprehensive understanding yet of US military and CIA actions in Somalia against al Shabaab, ISIS and al Qaeda over a thirteen year span. 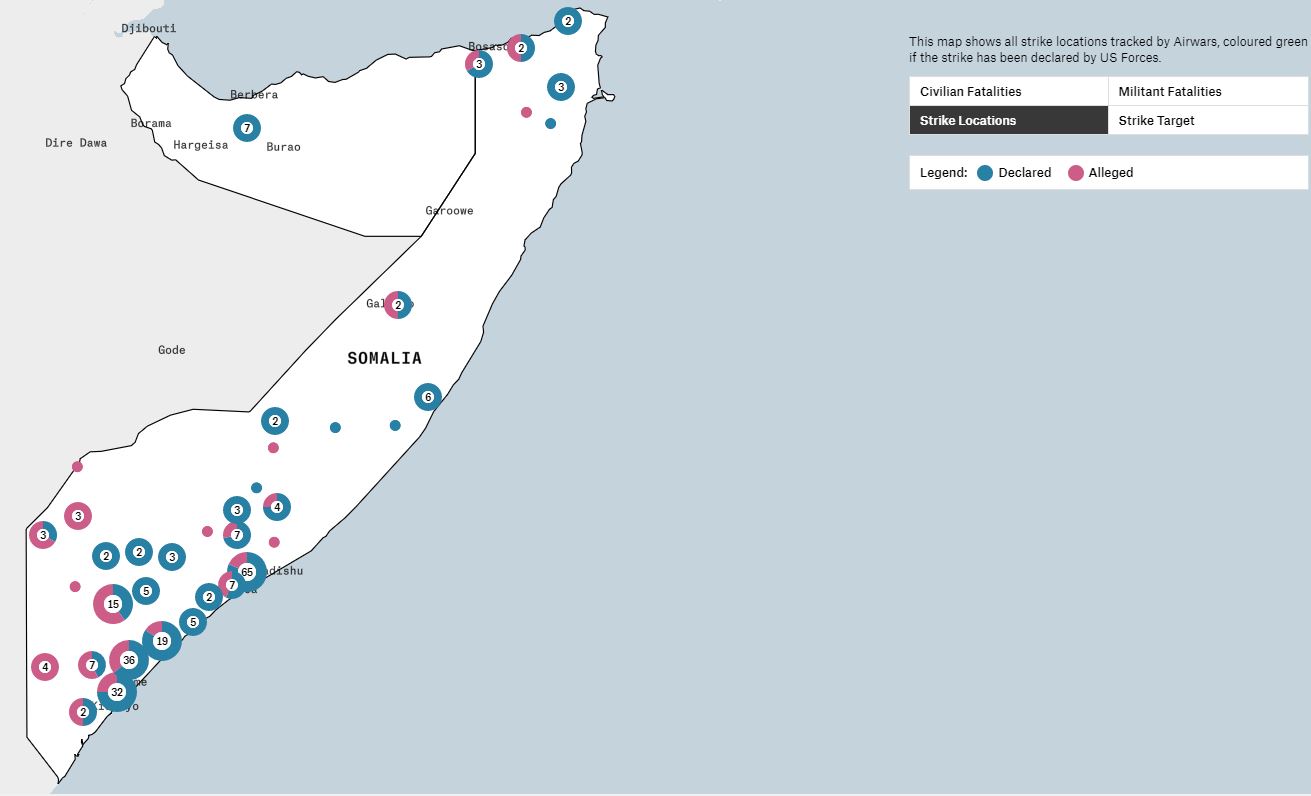 “While AFRICOM itself has admitted just two civilian deaths in more than a decade of strikes against terrorist groups like al Shabaab, the true toll is significantly higher. Our work with the US-led Coalition in Iraq and Syria shows that militaries can improve their understanding and admission of civilian harm, when their actions are routinely and publicly scrutinised.”

A comprehensive Airwars approach to both strike reports and casualty monitoring has seen thousands of additional sources being added to the Bureau’s original records – most of them via local Somali media and social media. Hundreds of photographs and videos have also been added – with the names of dozens of Somali victims now listed in our comprehensive and fully searchable public database.

Airwars has also geolocated all declared and claimed US actions in Somalia since 2007 – with consultant design team Rectangle building comprehensive new maps and timelines which can now be searched separately by civilian fatalities; militant fatalities; strike locations; and strike targets. A fully searchable database can also refine by civilian harm events; civilian victim names, age and gender where known; declared versus possible US actions; and air versus ground actions.

In addition, Airwars has also permanently preserved the Bureau’s own decade-long research into Somalia – ensuring that future researchers and academics will always be able to interrogate its own groundbreaking findings. Hundreds of the Bureau’s archive news stories on US actions in Yemen, Somalia and Pakistan have also been added to the Airwars site.

“If you don’t even count how many air strikes there are and how many civilians are being killed, what chance is there of reducing casualties?” notes Meirion Jones, deputy editor at the Bureau of Investigative Journalism. “The Bureau has been chronicling the death toll in Somalia for 10 years, and is now proud to hand that task over to Airwars which already does such a thorough job of counting strikes and casualties in Syria, Iraq and Libya.”

Airwars provided US Africa Command with comprehensive details of  alleged civilian harm events in Somalia during 2019, and also asked for clarification on alleged US actions that year. Officials have now confirmed no US military involvement in 21 claimed events last year – while promising to respond on civilian harm claims in the near future. 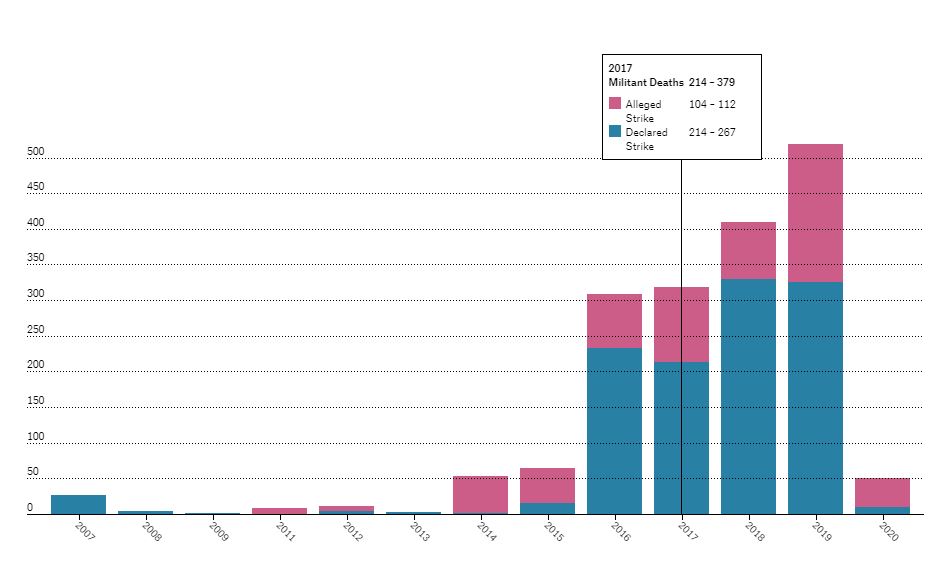 Several thousand militants have allegedly been killed by US actions in Somalia since 2007.

▲ The funeral of Abow Ali Wardi, according to al Shabaab killed in a lethal US drone strike on June 25th 2019 (via SomaliMemo)