‘OK, fine. Shoot him.’ Four words that heralded a decade of secret US drone killings

The Central Intelligence Agency (CIA) usually gets all the credit for the first US drone targeted killing beyond the conventional battlefield.

But it was the military which gave the final go-ahead to kill on November 3 2002.

Lt General Michael DeLong was at Centcom headquarters in Tampa, Florida when news came in that the CIA had found its target. The deputy commander made his way down to the UAV Room, showing live video feeds from a CIA Predator high above Marib province in Yemen.

The armed drone was tracking an SUV on the move. The six terrorist suspects inside were unaware that a decision had already been made to kill them.

Interviewed by PBS, DeLong later recalled speaking by phone with CIA Director George Tenet as he watched the video wall:

Eight thousand miles away and moments later, six alleged terrorists were dead. Among them was a US citizen.

‘Orchestrator’ killed
The media carried detailed accounts of the ‘secret’ attack within days. Yemen’s government, which had co-operated on the strike, also released the names of the six men killed, including that of US citizen Kemal Darwish.

Concerns he had been deliberately targeted were dismissed, as it was reported the intended CIA target was Qa’id Salim Sinan al-Harithi, al Qaeda’s ‘orchestrator’ of the lethal attack on the USS Cole.

As the New York Times noted at the time, ‘Mr. Harethi was not on the FBI’s list of the 22-most-wanted terrorist fugitives in the world,’ and added that ‘although investigators wanted to question Mr. Harethi about the Cole bombing, the CIA did not consult law enforcement officials before the Yemeni operation.’

A secret US cable, dated a fortnight prior to the strike, also shows that Yemen’s government had already incarcerated more than a dozen men wanted in connection with the Cole bombing. At least one of them, Fahd al Quso, was killed in a subsequent US drone strike.

Although investigators wanted to question Mr. Harethi about the Cole bombing, the CIA did not consult law enforcement officials before the Yemeni operation’

Questions remain about how much the CIA and Centcom actually knew about the presence of a US citizen that day.

When assistant US defense secretary Paul Wolfowitz openly discussed the strike with CNN on November 5, he noted only that a ‘successful tactical operation [has] gotten rid of somebody dangerous.’ It would be many years before senior officials would again openly acknowledge the covert drones project.

No inevitability
The way had been cleared for the November 2002 killings months earlier, when President Bush lifted a 25-year ban on US assassinations just after 9/11.

He later wrote that ‘George [Tenet] proposed that I grant broader authority for covert actions, including permission for the CIA to kill or capture al Qaeda operatives without asking for my sign-off each time. I decided to grant the request.’

Since then, under both Bush and Obama, the US has carried out targeted killings (or extrajudicial executions according to UN experts) using  conventional aircraft and helicopter strikes; cruise missiles; and even naval bombardments.

Yet the drone remains the US’s preferred method of killing. The Bureau has identified a minimum of 2,800 (and as many as 4,100) killed in covert US drone strikes over the past ten years. What began as an occasional tactic has, over time, morphed into an industrialised killing process. 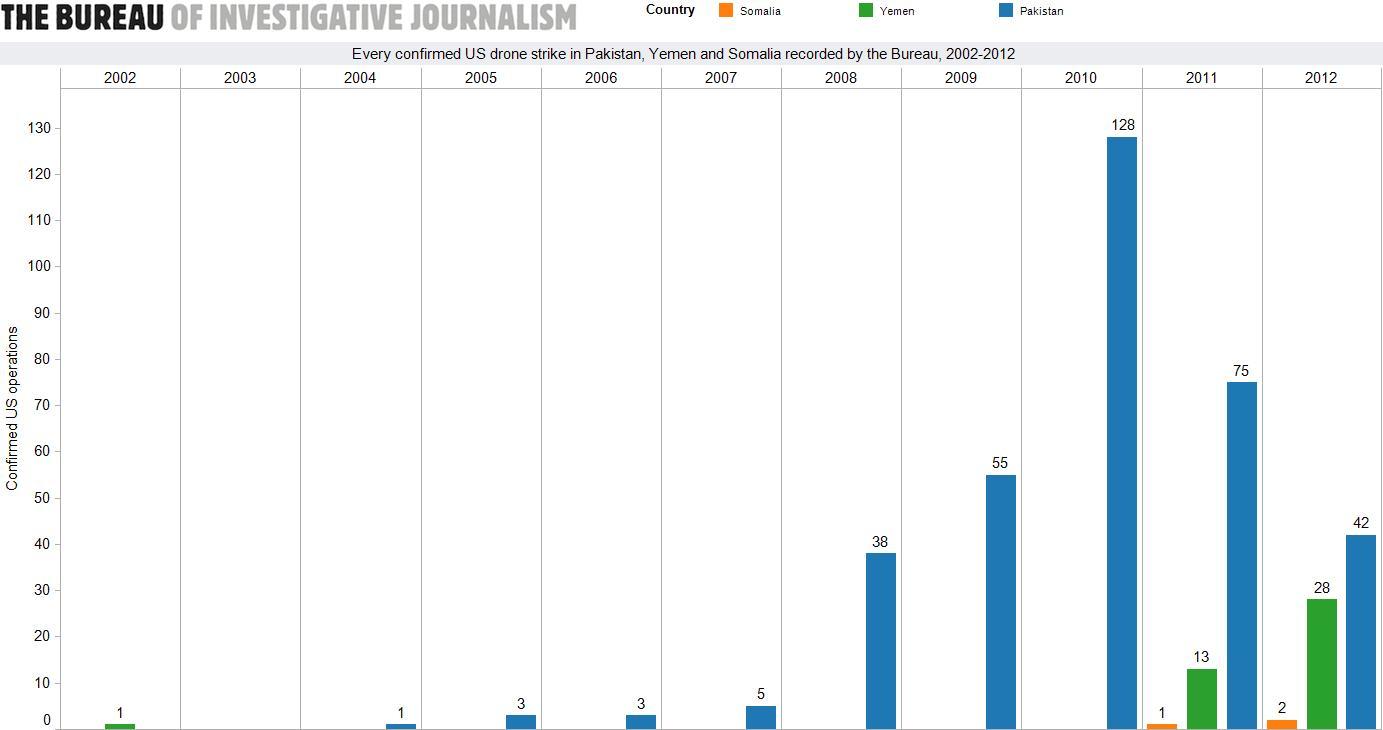 Every confirmed US drone strike in Pakistan, Yemen and Somalia recorded 2002-2012.

There was no inevitability to this when the strikes began. Time magazine opined in 2002 that covert drone attacks were ‘unlikely to become a norm.’ And in the early years of the programme this was true. The next covert drone strike took place in Pakistan in June 2004, followed by a further strike 11 months later.

Yet slowly, surely, the United States has come to depend on its drone killing programme. By Obama’s presidency drone use against alleged militants was sometimes daily. Six times more covert strikes have hit Pakistan under Barack Obama than under George W Bush. And as the Bureau’s work shows, when known strikes in Yemen, Somalia and Pakistan are added together, they reveal a growing dependence upon covert drone killings.

Recent reports show that the US is now formalising the drone killing project. Some insiders talk of a decade or more of killing to come, with Mitt Romney noting that he would continue the policy if elected.

In Washington at least, a decade of targeted killings of alleged terror suspects appears to have normalised the process.