A review of 61,000 unique sources reveals the intensity and scale of civilian harm resulting from alleged Russian actions

Since the beginning of Russia’s military intervention in Syria in 2015, Airwars has tracked, documented and preserved every local allegation of civilian harm resulting from Russian actions – over 4,000 individual incidents from 61,915 unique sources.

We have collected 11,181 names of civilians reported killed, and identified 1,383 family members killed in the same incidents. In total, our archive indicates that by March 2022, as many as 24,743 civilians had been locally-alleged killed by Russian actions in Syria, and another 43,124 injured. To date Russia has yet to publicly accept responsibility for the death of a single civilian during the campaign.

Russian and Syrian regime pilots often fly the same Russian airframes, use the same munitions and tactics, and also fly joint patrols. For this reason, local communities can find it extremely challenging to attribute civilian harm directly to one party or another.

In those events where only Russia is implicated Airwars believes the likely civilian fatality toll to be between 4,300 and 6,400. Between 10,000 and 17,100 further deaths are alleged from contested events – where Russia is only one of the belligerents blamed for an attack, primarily alongside the regime.

This briefing focuses on Russia’s engagement in Syria in order to help civil society, journalists, researchers and humanitarian practitioners understand patterns of civilian harm resulting from Russian actions, which can also help inform understanding of Moscow’s ongoing attacks in Ukraine. Airwars continues to document recorded civilian harm resulting from the actions of all other foreign belligerents in Syria – such as Turkish military engagement and US led coalition activities.

Our findings on Russia in Syria present aggregated results from our newly updated civilian harm archive. Each incident of civilian harm presents a unique data point but we encourage all those engaging with these findings to also review our open access archive, where each incident can be reviewed in its entirety: click here.

While we consider all events in our archive as active – meaning they will be updated as new information comes to light – the data presented here reflects can be considered up to date as of March 24th 2022.

More details on our methodology and casualty counting standards can be found here.

Russia first intervened directly in Syria in September 2015, five years into the country’s civil war, in support of the Syrian regime. In the first three years of the conflict, more than 45,000 airstrikes were declared by Russian forces. While the initial alliance between Russian and the Syrian regime declared they were targeting the Islamic State, the two actors have increasingly focused on clearing rebel-held areas – with the final rebel stronghold in Idlib appearing to be Russian’s primary target today.

Over the course of Russian involvement in the conflict, overall up to 24,743 civilians have been locally alleged killed by Russian actions; including those incidents with contested attribution to the Syrian regime. This includes up to 5,318 children, 2,953 women and 4,208 men where the gender and ages of victims are known. 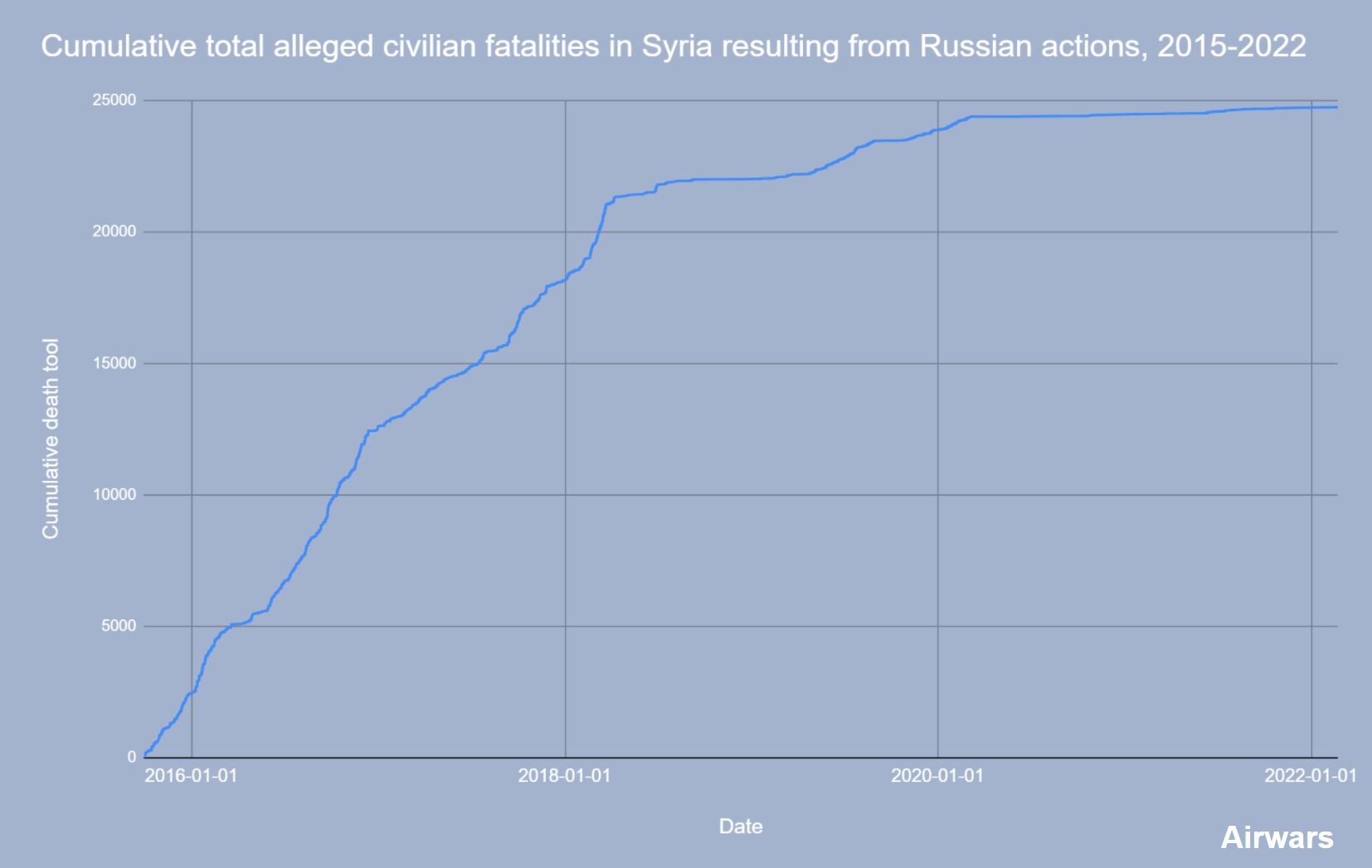 Our data includes all allegations where one or more local sources pointed to Russian forces as being responsible for civilian casualties – including those events where additional sources blamed the Syrian regime (or in a small number of events, other actors such as the US-led Coalition or Turkey). In total these contested incidents account for 60% of the civilian fatalities linked to Moscow’s actions in Syria in our archive. Until Russia and the Syrian regime are transparent about their actions in Syria, it is highly likely that we will not be able to identify the specific perpetrator of each contested event. That said, the likelihood that civilians were harmed in such attacks is often high. 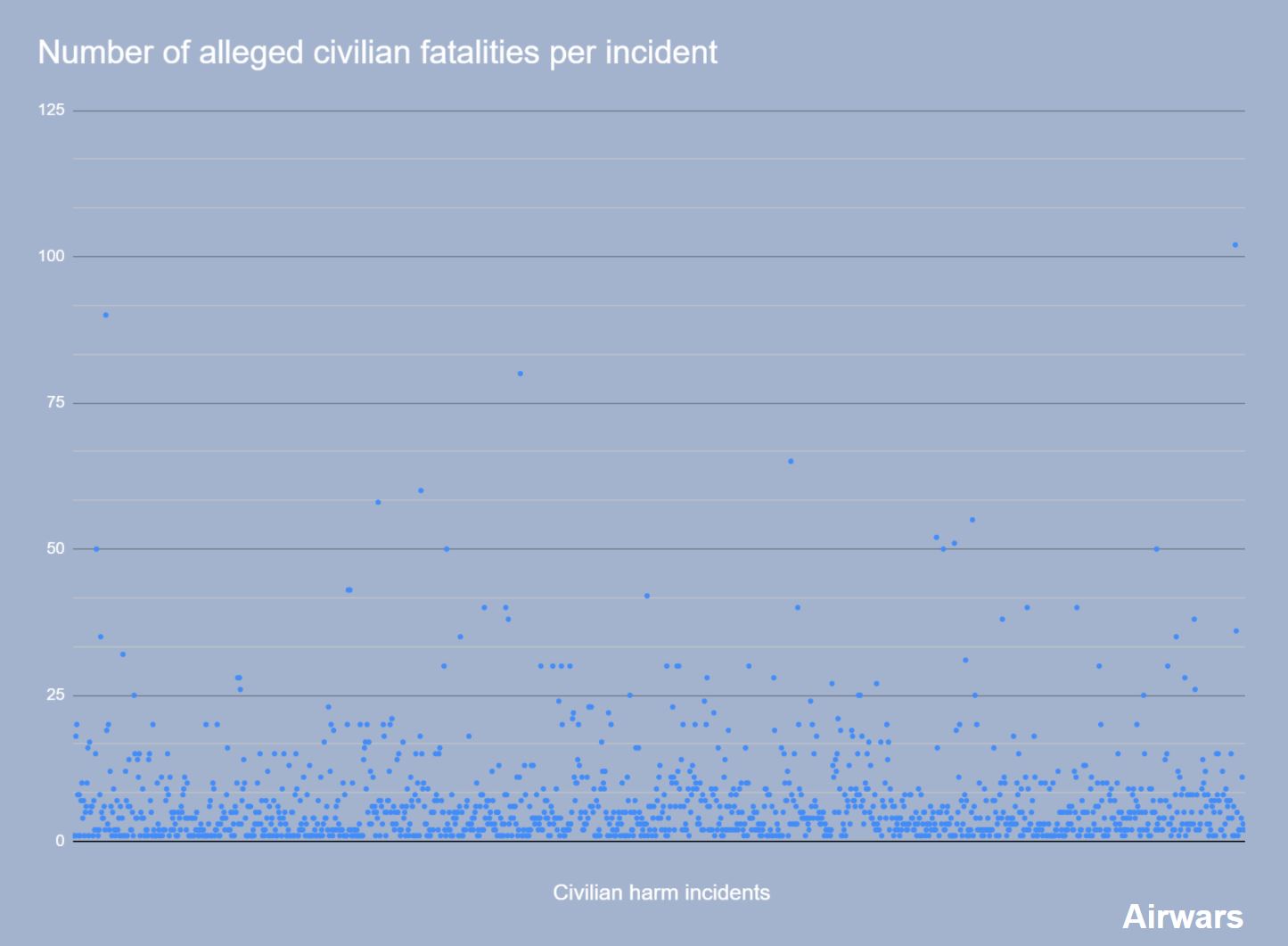 Each data point represents the number of alleged civilian fatalities in a single civilian harm incident.

As widely documented by conflict monitors, civilian casualties are more likely to occur when actors target populated areas, especially when using explosive weapons with wide area effects. Airwars data shows that there are at least 299 civilian harm incidents in Syria where local sources have alleged that ‘vacuum’ missiles have been used by Russian forces: a particularly deadly explosive that can suck the oxygen from the air and cause a blast wave so massive it can destroy even reinforced infrastructure. These incidents account for up to 1,480 alleged civilian fatalities. 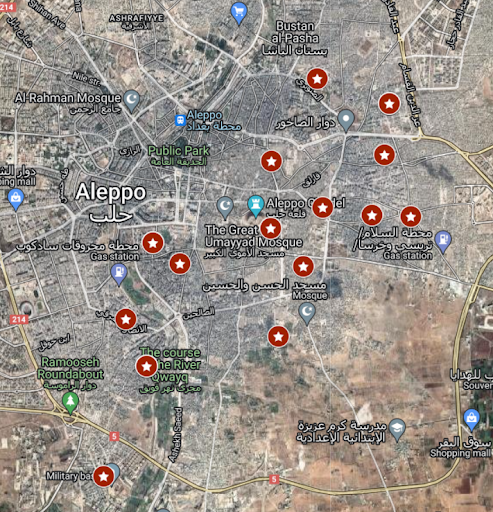 Location of incidents referencing use of vacuum missiles during the Battle of Aleppo – 2016.

In the campaign to capture Aleppo in 2016, Russian forces were alleged to have used these weapons 23 times on the densely populated city, according to Airwars monitoring of hyperlocal sources.

While vacuum missiles are not banned under international law, their deliberate use on civilian neighbourhoods is prohibited. Russian forces have also been accused of using prohibited ‘cluster’ bombs – munitions that have a large and inaccurate blast radius, and are likely to cause significant harm beyond the intended target.

In 567 civilian harm incidents recorded in the Airwars archive, local sources reported that cluster munitions have been used – accounting for up to 3,640 civilian deaths, and 7,040 civilian injuries.

Within the first three months of Russian attacks in Syria in late 2015, Airwars found that local reports of civilian harm were already indicating a clear trend of systematic attacks on civilian neighbourhoods and vital infrastructure.

Local communities and civil society organisations, such as the Syrian Network for Human Rights, have continued to report on and document this major trend. On February 27th 2022, less than a week after Vladimir Putin’s invasion of Ukraine, local activists described “massive destruction” on a marketplace in the town of Afes in Idlib province; up to two people were killed and another four injured in the action attributed both to Russian forces and the Syrian regime.

This is one of 204 unique incidents in the Airwars archive where Russian forces were locally blamed for civilian harm in an attack on a marketplace; in total these incidents account for up to 3,051 civilian fatalities. 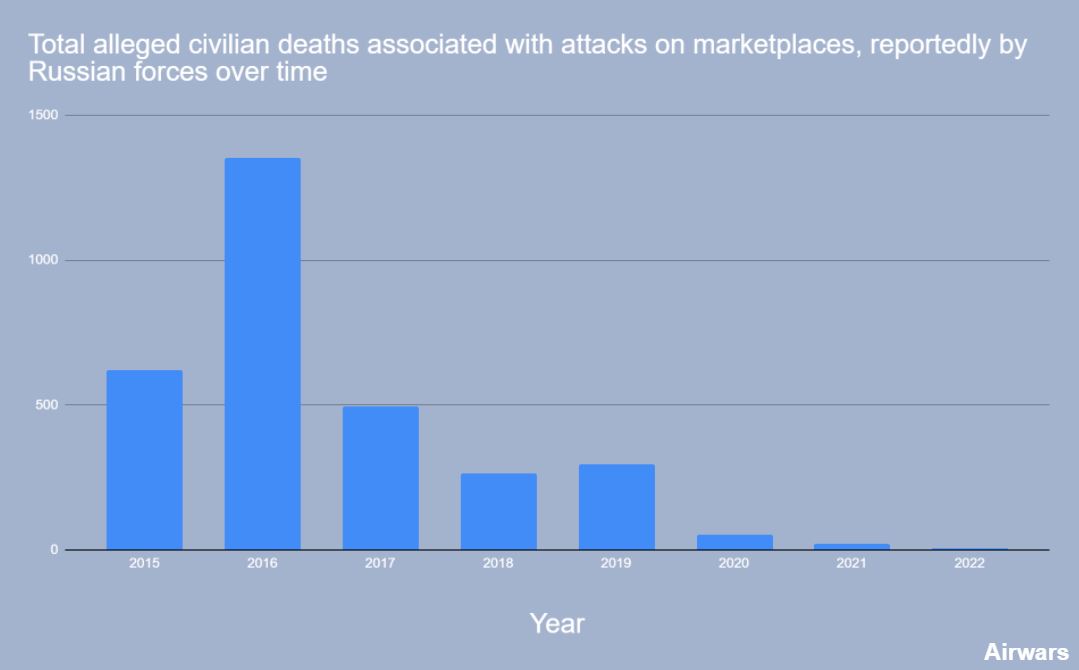 While it is not unusual for belligerents monitored by Airwars to harm civilians in attacks which strike marketplaces, our data indicates that Russian forces are likely to do so at a far higher rate than most. Our monitoring of alleged civilian harm resulting from US-led Coalition actions in Syria, for example, finds that despite similarly intensive campaigns conducted predominantly by airstrikes, US-led Coalition actions led to claimed civilian harm events in marketplaces on forty occasions. Of those events, Airwars presently assesses that 23 incidents did likely result from Coalition bombings. The alliance itself has also publicly conceded civilian deaths and injuries in six of those marketplace attacks – a clear contrast with Moscow’s ongoing refusal to concede any harm from its seven-year campaign.

Russian forces in Syria, along with the Syrian regime, have also been accused of repeatedly attacking medical facilities, hospitals, and clinics throughout Syria with explosive munitions. Overall, our research identified 229 incidents where civilian harm reportedly occurred in medical facilities following alleged Russian and/or Syrian regime actions. In many incidents, local sources reported “total destruction” of facilities – without any possibility of reconstruction.

Other civilian spaces have also been hit during Russia’s campaign; in at least 180 civilian harm incidents recorded by Airwars, fatalities and injuries occured in schools. Educational facilities have frequently been the site of reported Russian incidents, including universities, where at least two attacks struck campuses, including the University of Ebla. On January 21st 2018, one civilian was reported to have been killed when Russian “heavy aerial bombardment” struck the university. On the same day there were 15 additional raids on the area which further damaged the University buildings.

Local reporting also reveals at least 53 cases where civilians were reported killed by Russian strikes on factories and water sanitation stations. In 2016 alone, eight attacks on factories and twelve attacks on water stations were reported; most of these were part of a major regime-led campaign to gain control of Aleppo city. In one incident on September 23rd 2016, up to 250,000 people in eastern Aleppo were reported to have temporarily lost access to water completely, when an air raid on the neighbourhood of Bab al Nayrab hit a water pumping station.

As Russian forces and their Syrian regime allies have closed in on the final rebel-held enclave in Idlib, critical civilian infrastructure continues to come under attack. From September 2021 until January of this year, civilian harm incidents have been reported resulting from attacks on poultry farms at least twice a month. Overall, despite the lower tempo of the conflict in 2021, it was also the year that saw the most attacks on farming facilities. 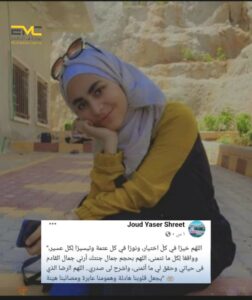 “Oh God, by the size of the beauty of your paradise, show me the beauty of the next in my life and fulfil for me what I wish, and comfort my heart.” – Jude Yasser Shara’s, aged 21, last Facebook post minutes before artillery shelling killed her in Idlib City on September 7th 2021. Jude was reported to have recently gradauated from an undergraduate degree in Psychology and was he head of Al Seraj al Munir Kindergarten (Image shared via Idlib Media Centre).

In 12 cases identified in our datasets, civilians were harmed in incidents where Russia was accused of targeting humanitarian response efforts – often in conjunction with the Syrian regime.

In four incidents, local sources reported civilian harm after attacks on food convoys. In the first of these cases, on November 25th 2015, eight civilians were reported killed, including a child, when Russian planes hit a series of trucks close to the Turkish border. Russia accepted responsibility for the attack, but did not accept responsibility for the civilian casualties – and denied that the trucks were part of a humanitarian convoy.

Potential implications of Russia’s actions in Syria for Ukraine

Airwars has actively monitored, assessed and preserved all community-reported civilian harm claims from Russian actions in Syria since September 2015 – resulting in a major public database that presently runs to 650,000 words.

Our detailed findings are clear. Civilian harm from Russia’s actions in Syria has been both extensive and continuous. Civilian neighbourhoods are routinely targeted by both air and artillery strikes, often with no suggestion of the presence of armed rebels. Marketplaces, hospitals, schools, critical infrastructure, and first responders, are also routinely struck. Indeed the frequency of such attacks compared to those of other actors in Syria, leads Airwars to conclude that Russia deliberately and routinely targets both civilians and civilian infrastructure, as part of a broader strategy to drive civilians from rebel-held areas.

Many of the profoundly concerning and potentially unlawful Russian actions in Syria – which Airwars and others have extensively documented – are now reportedly being witnessed at scale across Ukraine, with multiple towns and cities under direct attack. Indeed, with the addition of tens of thousands of Russian ground forces and weapon systems never deployed in Syria – such as guided missile strikes and MRLS salvoes – the potential exists for far greater civilian harm in Ukraine than that extensively documented for Syria.

Moscow’s extensive ongoing attacks on urban centres – where millions of Ukrainians remain trapped – is particularly concerning. According to United Nations monitors, the great majority of civilian deaths and injuries result from the use of wide area effect explosive weapons on urban areas. Upcoming UN-brokered talks in Geneva to restrict the urban use of such weapons offer a clear opportunity for other nations to distance themselves from Russia’s outrageous actions.

▲ Locals trying to rescue injured civilians from the rubble not long after aerial and missile bombardments in Douma and nearby locations around Damascus, reportedly killing between 42 and 70 civilians on Sepember 13th 2015. (Image via SNN)