There are no conceded casualties in Syria in 2021, despite widespread public reporting. The report also maintains low casualty figures for the controversial Baghouz campaign in 2019.

While these mostly align with public reports on Afghanistan and Somalia – the lack of any incidents for Syria are of serious concern. Airwars has documented at least 17 incidents in which harm to civilians occurred as a result of US actions; this includes 15 civilian deaths, and 17 injuries.

Alongside reports of casualties in 2021, included in the annual report are additional cases from past actions under Operation Inherent Resolve (OIR) – the operation to defeat ISIS. In these cases too, conceded casualty reports are significantly lower than local reporting suggests.

These casualty releases have been much anticipated this year, as the Department of Defense worked on its new Civilian Harm Mitigation and Response Action plan, published earlier this month. Towards the end of last year, reporting from Azmat Khan at the New York Times drew renewed attention in international media to the range of issues around how civilian casualties were assessed by the US in Iraq and Syria, prompting the review by US officials.

However the US’ military actions and its track record on civilian casualties have long been the subject of criticism, with calls for accountability and greater transparency on civilian harm mitigation and tracking throughout the so-called ‘forever wars’. In last year’s annual report, Airwars and others raised serious concerns with the 2020 annual casualty admissions – noting that reporting from other sources placed the civilian death toll at five times higher than the numbers admitted by the DoD.

In its 2021 report, the Department of Defense conceded no deaths or injuries in either Iraq or Syria for 2021. The report states that there were six cases of civilian harm received by OIR in 2021; 3 of which have been assessed as non-credible, while the other three are still open.

These rejected civilian harm claims likely correspond to incidents mentioned in previous press releases by OIR, which account for at least one civilian fatality and two injuries. The civilian fatality assessed as ‘non-credible’ was claimed by local sources to be a 7-year old boy, killed while US forces were reportedly conducting a training exercise.

It is unclear if the remaining open cases mentioned in the annual report include the two cases previously noted as open by CENTCOM earlier this year.

Airwars own research indicates that there were at least 15 additional cases alleging harm resulting from US actions carried out in Syria throughout 2021.  US military actions in Syria in 2021 primarily included support to local ally the Syrian Democratic Forces (SDF) in north eastern Syria – where civilian harm was often reported during targeted operations on suspected ISIS militants.

In one such incident, typical of the types of allegations recorded last year – a man and his son were allegedly killed in a raid carried out by the SDF with air support from the US military while they were said to be grazing their sheep. Local sources reported that the incident sparked “a wave of panic” among the civilians in the neighbourhood.

Our full incident archive can be found here.

This year’s report contained three cases of previous harm allegations in Baghouz in 2019 – including the controversial March 18th 2019 strike which was the subject of an extensive investigation by the New York Times released at the end of last year, and prompted an internal investigation at the directive of the Secretary of Defense.

In the final major battle in the war against ISIS, the US-led Coalition carried out an intensive campaign to recapture the last ISIS territorial stronghold. Mass civilian casualty incidents were reported at the time – by the end of the campaign in March, reports of hundreds of casualties were being circulated online, including disturbing footage of mass graves and charred bodies. The New York Times revealed that one of the final strikes by the US-led Coalition included a 2000-pound bomb, dropped on a crowded area.

The 2021 annual report continues a pattern observed consistently by casualty recorders of significant discrepancies between conceded casualties and local allegations throughout this campaign; more so even than in other – more contested – battlegrounds, such as the Battle of Mosul. 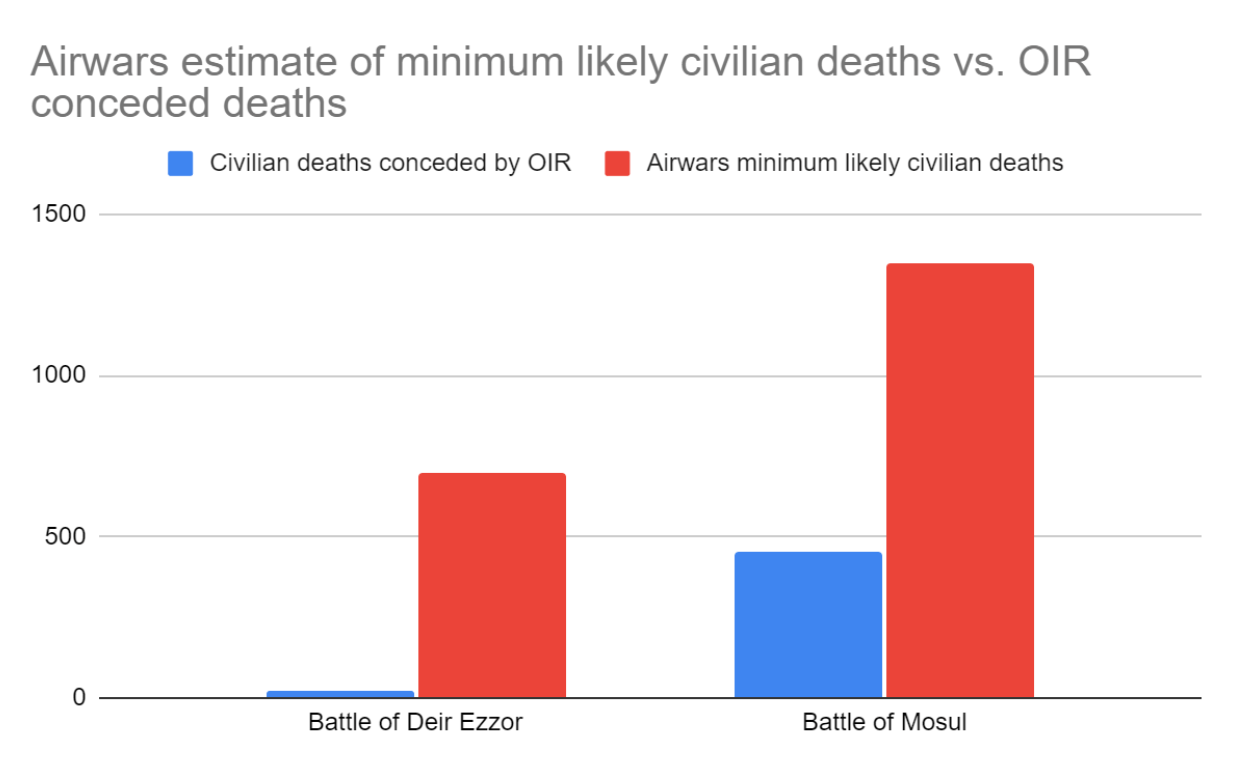 In total – the US has conceded just 3% of even the most conservative estimates of civilian harm reported during the Battle of Deir Ezzor; compared with over a third of casualties alleged in the Battle of Mosul, for example.

Airwars puts the minimum likely estimate of deaths during this campaign at 695, while the US admits to less than 30 – including those now conceded in the annual report.

Notably, this is the first time that the March 18th incident has been officially confirmed in public reporting by DoD – the incident was rejected previously as ‘non-credible’ twice by OIR; with an assessment reopened only after widespread media attention on the case at the end of last year.

Local sources have alleged at least 160 civilian fatalities resulted from the strike, including up to 45 children. In May this year, General Garrett – the four-star general put in charge of leading an investigation into the case – rejected almost all allegations of wrong-doing by US military forces during the operation. His investigation, which was kept classified apart from the Executive Summary, concluded that nearly all those killed were combatants.

In another of the incidents included in the report, from February 2019, we were able to identify at least three possible matches to incidents in our archive (here, here and here). While no civilian deaths were conceded by the US, local reports indicate that in one incident alone at least 50 civilians were said to have been killed.

One of the conceded events also matches a confirmed incident published in a press release earlier this year – an airstrike on March 13th 2019; nearly all sources reported that those killed in this strike had been women and children living in a camp in Baghouz. Fatality estimates ranged from 20 to 100 civilians, while the US admitted to four civilian deaths.

The US withdrew officially from Afghanistan in September 2021. There were 10 reports of civilian casualties from combat operations in Afghanistan, 4 of which were deemed credible – the DoD conceded the deaths of 12 civilians, and the injuries of 2 civilians. 10 of the civilians who died all died in the same incident on August 29, 2021 in Kabul – this likely refers to the botched drone strike on an aid worker in Kabul, which the DoD later admitted was a ‘tragic mistake’.

UNAMA, which monitors civilian casualties in Afghanistan, raised the alarm over increasing civilian casualties in Afghanistan as the situation deteriorated. However, it appears that these incidents had not been attributed by UNAMA to the US at the time of their latest report published in June last year, which contained no casualty incidents resulting from international military actions in 2021 – though notably some incidents were still under review at the time of publication.

The US also maintains an active military presence in Somalia, recently bolstered by Biden’s decision to redeploy US troops in Somalia in May of this year. The report did not state a total number of cases in 2021 that it had investigated, but reported on one incident that had previously been conceded by AFRICOM.

Despite an initial assessment by AFRICOM that no civilians had been harmed in the strike, which took place in January 2021, in its first quarterly report last year AFRICOM admitted that three civilians had been ‘inadvertently injured’ when US forces conducted an air strike on what was reported to be an al-Shabaab radio station.

The US has carried out at least 254 raids or airstrikes in Somalia since 2007, and has acknowledged five civilian deaths throughout this period. Airwars own research puts this total number at minimum 78 fatalities.

While the 2021 figure aligns with public reporting, it should be noted that there are significant challenges with harm documentation in Somalia given the security environment.

This year’s annual report references the recently released Civilian Harm Mitigation and Response Action Plan (CHMR-AP) in part to explain any potential discrepancies between DoD admissions and public reporting. The annual report acknowledges that “specific processes for reviewing or investigating incidents have varied over the years”, while the CHMR-AP explicitly noted that practices for conducting assessments and investigations had been “applied inconsistently across DoD”.

The comprehensive action plan is intended to address such inconsistencies; though for those civilians who have had their cases rejected as non-credible, or for those who have never had their cases investigated at all – the promise of review and reform is likely too late.

According to Airwars’ archive, the possible death toll from the US-led Coalition’s actions in the war against ISIS alone could be at least 8,192 and as many as 13,247 civilians killed. OIR in total has acknowledged killing approximately 1500 civilians – though notably, many individual member states have yet to accept responsibility for their own efforts. The UK MoD, for example, has yet to admit more than one civilian was killed by its actions in the entire campaign.