Nineteen of 40 events declared by the Pentagon to Congress for Iraq, Syria and Somalia for the past year were Airwars referrals, official records show

The Department of Defense (DoD) informed Congress on May 6th that US forces in Afghanistan, Syria, Iraq and Somalia had between them killed at least 132 civilians and injured 91 more during 2019. The Pentagon also reported a further 79 historical deaths from its actions in Syria and Iraq during 2017-18.

The 22-page Annual Report on Civilian Casualties In Connection With United
States Military Operations is the third such public declaration, mandated in law by Congress since 2018.

According to the report – which included details of continuing Pentagon efforts to improve both accountability and transparency for civilian harm – “U.S. forces also protect civilians because it is the moral and ethical thing to do. Although civilian casualties are a tragic and unavoidable part of war, the U.S. military is steadfastly committed to limiting harm to civilians.”

During 2019, the majority of declared civilian deaths from US actions took place in Afghanistan. According to the Pentagon, 108 civilians were killed and 75 injured in 57 incidents. Fourteen of those events involved US ground forces.

That casualty tally represented a significant undercount according to the United Nations Assistance Mission in Afghanistan (UNAMA), which has been comprehensively monitoring civilian deaths from all parties for more than a decade. According to UNAMA’s own Annual Report, at least 559 civilians were killed and 786 injured by international military actions during 2019 – almost all by airstrikes.

Table from UNAMA’s 2019 annual report, showing the number of civilian deaths and injuries it believed had resulted from pro-government forces that year.

Officially confirmed civilian deaths from US actions in Iraq and Syria fell steeply – down from 832 fatalities declared to Congress last year, to 101 deaths conceded in the latest report.

That sharp reduction was partly expected, given the significant reduction in battle tempo following the bloody capture of both Mosul and Raqqa in 2017. However, in early 2019 very significant civilian fatalities were locally alleged from Coalition air and artillery strikes during the final stages of the war – only a fraction of which have been admitted.

Of the 73 known civilian harm claims against the US-led Coalition during 2019, Airwars presently estimates that at least 460 and as many as 1,100 non combatants likely died. However in its own report to the Pentagon, the US has conceded just 22 civilian deaths for the year across Iraq and Syria, in eleven events.

The Defense Department’s report reveals other worrying trends. Of the 21 historical cases officially conceded from US actions for 2017 over the past year, 18 had been Airwars referrals. Yet every single allegation referred by Airwars to the Coalition for both 2018 and 2019 was rejected – amounting to many hundreds of dismissed local claims.

According to Airwars director Chris Woods, the apparent move by the US-led Coalition away from engaging with external sources marks a backward step, which the organisation plans to take up with both Congress and DoD officials.

“Almost all of the deaths conceded by the US in Iraq and Syria for 2019 represented self referrals from pilots and analysts, with external sources cited on only three occasions. Many hundreds of civilian deaths which were credibly reported by local communities appear to have been ignored,” says Woods. “This goes against the Pentagon’s repeated promise to engage better with external NGOs including monitors, and we will be asking for an urgent explanation from officials of this apparent backward step.”

In January 2019 the Australian Defence Force (ADF) accepted responsibility for some of those deaths – confirming that a strike by one of its aircraft had killed between 6 and 18 civilians.

However the ADF also made clear that there was a second attack on the location by another Coalition ally that day – the identity of which was until now not known.

It its May 6th report to Congress, the Pentagon revealed that US aircraft conducted that second strike, additionally killing at least 11 civilians at the scene.

In February 2019, surviving family elder Engineer Amjad al-Saffar told the Sydney Morning Herald: “The level of accuracy of the bombing had always indicated to us that the attack couldn’t have been by Iraqi forces, because the house was targeted twice at the same point without any damage to the neighbouring building, and with very high accuracy.”

Asked to comment from Mosul on the Pentagon’s recent admission that its aircraft too had played a role in the mass casualty event, Engineer Amjad told Airwars: “As a well known and respected Mosul family, we feel both very sad and disappointed to learn of the US’s confession – three years after our catastrophe.- of their own role in an airstrike which killed so many. Along with Australia we hold the US fully responsible for our heavy loss of 35 family members, and demand both an apology and financial compensation.”

Other than this one case, the Pentagon’s report to Congress also revealed that all civilian harm events conceded by the US-led Coalition for Iraq and Syria over the past 12 months had been caused by US forces.

This contrasted with the previous report – which had inadvertently ‘outed’ fourteen strikes by America’s European allies which according to the Coalition itself had killed at least 40 civilians – but which the UK, France and Belgium refused to acknowledge. It remains unclear whether the Coalition’s civilian casualty cell has now ceased assessments of claims against other nations within the alliance. 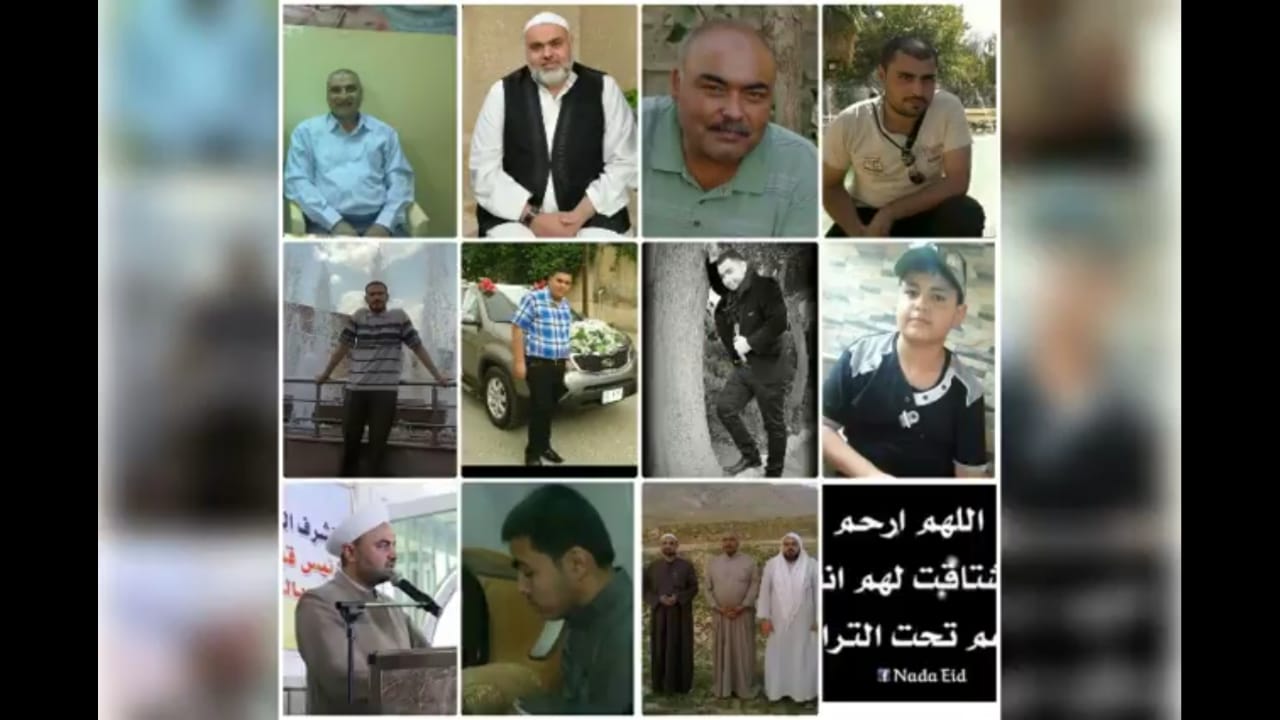 Photo montage of some of the 35 victims of June 13th 2017 strikes by Australian and US aircraft, courtesy of the Al Saffar family.

Two more civilian deaths from US actions in Somalia were officially conceded on April 27th, as US Africa Command issued its first ever quarterly civilian casualty report. Those same deaths were also reported to Congress two weeks later.

The newly admitted event – which according to local reports involved the death of a father and his child, and the injuring of at least three more civilians – relates to a US strike on the al Shabaab-occupied town of Kunyo Barrow on February 23rd 2019. AFRICOM had originally dismissed the claim. But it reopened an assessment after Airwars submitted a detailed dossier on the incident in January 2020, including what were believed to be precise coordinates for where casualties took place.

The latest admission has doubled both the number of cases and deaths publicly admitted by AFRICOM, during its sometimes controversial 13-year campaign to defeat the regional terror group al Shabaab. However those four deaths remain dwarfed by Airwars’ own current estimate of at least 70 civilians killed in 29 separate US actions in Somalia since 2007.

The US military’s campaign in Somalia has intensified significantly under President Donald Trump, with at least 186 declared actions since 2017 – more than four times the number of strikes officially carried out by the George W. Bush and Barack Obama administrations combined. Local civilian harm claims have also intensified under Trump, with as many as 157 non combatant deaths locally claimed to date.

Until recently AFRICOM had routinely denied any civilian harm from its actions in Somalia – leading to complaints of poor accountability. In April 2019, AFRICOM conceded its first civilian casualty event – though also had to admit to misleading Congress on the issue. Three months later, General Stephen Townsend took command.

When previously head of the US-led Coalition against ISIS in Iraq and Syria, Townsend had overseen key transparency reforms including the publishing of regular civilian harm reports; and routine engagement with external casualty monitors such as Airwars. Those same key reforms are now being implemented at AFRICOM.

Here's the precise geolocation work that our Airwars specialists recently provided @USAFRICOM for the Kunyo Barrow strike – and which likely played a role in today's Credible determination. pic.twitter.com/idlgKAHz0f

▲ Ruins of a family home in which 35 civilians died at Mosul on June 13th 2017 - in what is now known to have been US and Australian airstrikes (Image courtesy of the Al Saffar family. All rights reserved.)