A renewed campaign by Turkey in mid February against a Kurdish militant faction – which has seen Turkish troops pushing deeper than ever before into northern Iraq – also saw the deaths of thirteen Turkish civilian and military captives in a highly controversial attack, Airwars monitoring of the region shows.

On February 10th, the Turkish Armed Forces launched a major air and ground operation codenamed Operation Claw Eagle 2 against the Kurdistan Workers’ Party (PKK) in the Gara Mountain in Dohuk Governorate in northern Iraq. The PKK is designated as a terrorist group by the EU and the United States among others, though some Kurds view the group as a liberation organisation.

Turkey has launched a number of operations against the PKK in northern Iraq in recent years, the most recent being Operations Claw Eagle and Tiger in June 2020, which took place in the Qandil Mountains, the Sinjar District, and Makhmur.

According to Turkish military expert Levent Kemal, the military campaigns against the PKK have been effective in reducing the group’s operational capabilities. “The PKK’s [ability to] infiltrate into Turkey has been noteworthily reduced thanks to these operations. In particular, PKK infiltration routes have been under control and guerrilla hideouts in the Bradost area have been destroyed. In the West, in Zakho and Duhok areas, cooperation between the Turkish Armed Forces and the Kurdistan Democtatic Party’s (KDP) Peshmerga forces annihilated PKK’s presence near the Turkish border, forcing the PKK to retreat further south”.

According to the Turkish Ministry of Defence, the purpose of the most recent operation was to clear the PKK from the mountains, which it said had been used as a transit area for PKK fighters to cross from Iraq to Turkey; and also to secure the border to prevent what the ministry described as an imminent “large-scale attack” on Turkish forces in Iraq.

Another stated goal of Operation Claw Eagle 2 was to rescue Turkish captives held by the PKK. More than a dozen civilians and military personnel had been abducted by the PKK within Turkey in recent years, and were being held captive in Duhok.

The early hours of Operation Claw Eagle 2 saw Turkish aircraft reportedly bombing six villages in the area, causing severe damage to local vineyards and agricultural lands. The Turkish Minister of Defence, Hulusi Akar, claimed that 50 PKK targets were destroyed including air raid shelters, ammunition depots, and headquarters in the initial aerial bombardment. While no civilians were believed harmed during the attack as almost all inhabitants had apparently fled the area, locals say that the operation had nevertheless severely affected their livelihoods.

Kurdish analyst Abdulla Hawez assessed the impact of the campaign on local communities, saying that while civilians weren’t killed in the operation, “Turkish warplanes and drones were extensively bombarding dozens of locations; overall 90 villages were affected and were within the scope of the operation”.

The airstrikes were followed by a ground attack led by Turkish commandos against the  People’s Defence Forces (HPG), the military wing of the PKK. According to Minister Akar, 50 PKK fighters were killed in the operations and three members of the Turkish forces died. However, figures from Kurdish sources differed considerably, with ANF claiming that only 14 PKK fighters were killed as well as more than 30 Turkish soldiers.

On the third day of operations, thirteen Turkish nationals that were being held captive by the PKK in a location close to the village of Siyane were found dead by Turkish forces. According to both Kurdish and Turkish sources, some of those killed were civilians. Among the civilians killed were Sedat Yabalak, a civilian police officer and father of three in charge of Şanlıurfa Police Department; and Aydin Köse, a resident of the city of Adıyaman. Along with others, both men had been seized in Turkey by the PKK and held captive for several years in Kurdistan. 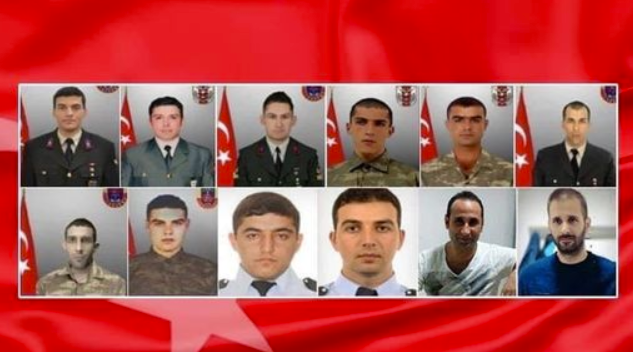 12 of the 13 Turkish captives killed in the Gara Mountain (via Muhsin.guler Facebook)

According to the Turkish Ministry of Defence, Turkish forces discovered the dead bodies of the thirteen captives after entering a bunker, suggesting that the PKK had executed them. However, the PKK has contested these claims, asserting that the captives were instead killed by Turkish airstrikes during the initial bombardment of Gara Mountain.

According to a PKK statement, the “camp where prisoners of war belonging to the Turkish security forces were held has been attacked in Gare. The camp was intensively bombed from the air at five o’clock [not clear if am or pm] on February 10th…. After this strike, the occupying Turkish army retreated a bit. Although it knew that there were prisoners there, the camp was again intensively bombed by fighter jets. The bombardment, which lasted for three days, and the fierce battles inside and outside the camp resulted in the death of some of the MIT members, soldiers and policemen we had captured.”

The deaths of the prisoners caused outrage across Turkey, with the Presidency’s media director, Fahrettin Altun emphasising Turkey’s intent to “chase down every last terrorist hiding in their caves and safe houses” and exact “painful” revenge and “swift” justice. There were fears that Turkey could use the captives’ deaths as a pretext to expand operations against Kurdish militant groups in northern Iraq, causing more peril for civilians.

“I expect the Turkish government to use the deaths to expand its military operations against the PKK in Iraqi Kurdistan. Turkey may also attack Sinjar but this may have far more ramifications as pro-Iran militias are widely present in Sinjar and are allied with PKK-backed Yazidi groups”, explained Hawez.

These expectations may soon be realised, given the increasingly hawkish rhetoric adopted by Ankara following Operation Claw Eagle 2. Speaking at a party rally on February 15th, Turkish President Recep Tayyip Erdogan reaffirmed his desire to expand operations outside of Turkey in response to the botched rescue attempt in Gara, saying “we will extend our operations to areas where danger exists. We will stay in those areas we secure as long as necessary.”

▲ Relatives of Sergeant Mevlut Kahveci, one of the captives killed in the Gara Mountains of northern Iraq, mourn at his funeral ceremony on February 15th (via duvarenglish)