As the Russian-backed regime offensive against rebels in Idlib and Hama continued during August, civilians trapped in these devastated governorates continued to pay a heavy price for the Assad government’s gains. Nevertheless, the month saw a 10% fall in civilian casualty events linked to Russia and/or the regime, with the maximum claimed death toll also dropping, by 53%.

Even so, Airwars tracked 109 separate alleged civilian harm incidents during the month. Once more, the volume of allegations meant that at time of publication Airwars was still researching and assessing August’s civilian harm incidents. However, initial estimates show that as many as 203 civilians were allegedly killed by Russian and/or regime actions in August, compared to a maximum of 432 such deaths across 121 events in the previous month.

Once again, Idlib bore the brunt: 90% of events tracked by Airwars were in the governorate. There were 10 additional incidents in Hama and one in Aleppo. Losses among the most vulnerable of civilians were again high: of the 203 civilians locally alleged killed, at least 35 were children and 16 women. As many as 432 additional civilians were reportedly injured. As Airwars researchers uncover further information on these events, it is likely that this toll will rise.

In the majority of cases, it was impossible to tell whether Russia or the regime were responsible for the civilian harm, with conflicting claims against both belligerents. Rarely in doubt was whether harm had befallen civilians. In the worst incident of the month, on August 16th, in Hass, idlib, most sources agreed that Russian airstrikes killed between 13 and 16 civilians including up to six children and three women – wounding as many as 30 more. However, the White Helmets also reported the use of regime artillery in the area.

According to Euphrates Post, Russian jets bombed “homes of displaced people” in the town. Local civil defence said that “a foetus, born prematurely” was among those slain, stating that “he was killed before he was given a name, and all members of his family were killed”.  His father was named as Abdul Jabbar Othman. The Syrian Network for Human Rights published an image showing body bags lining a corridor. 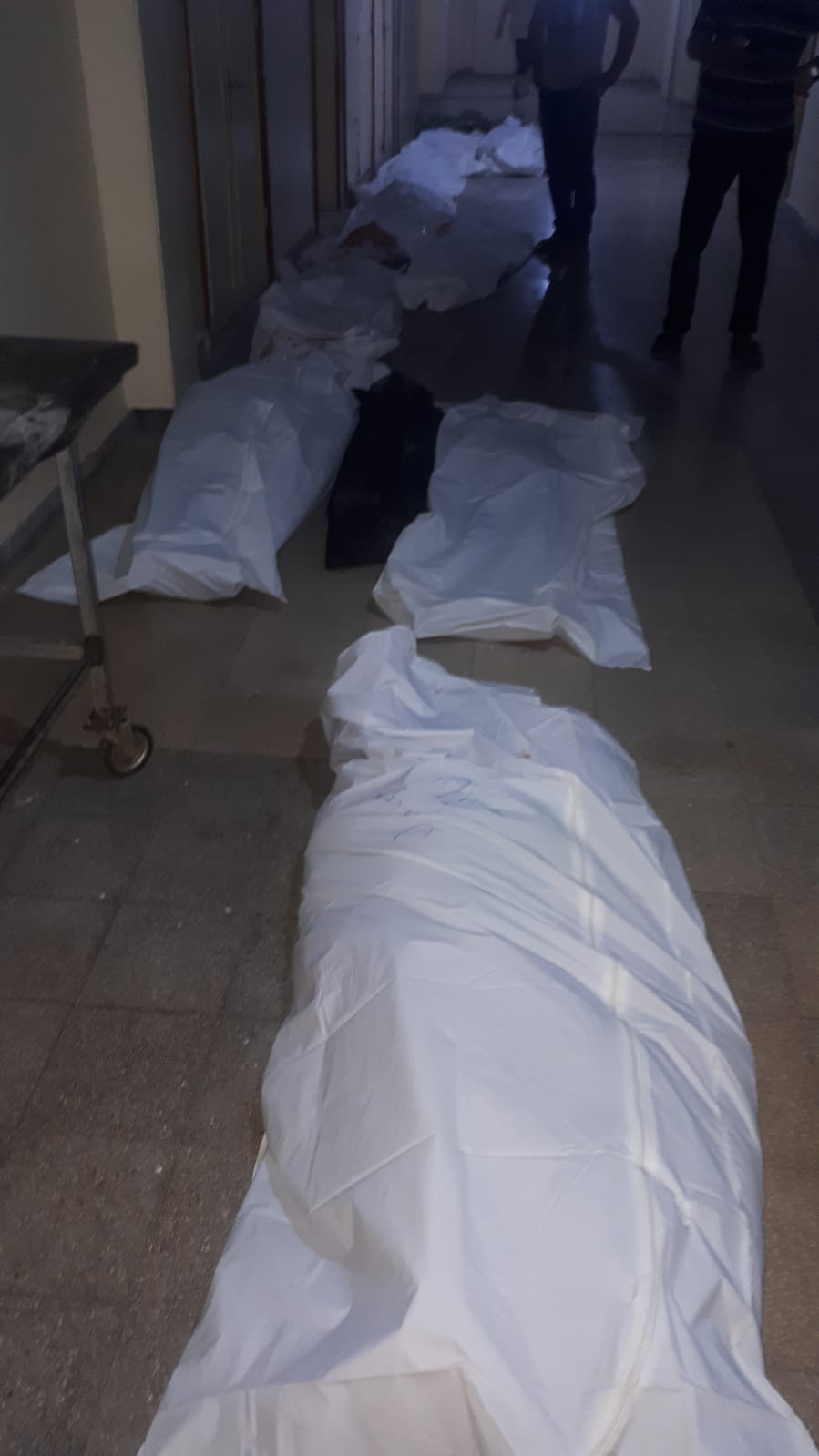 Bodies lined a corridor following an alleged Russian airstrike on Hass, Idlib on August 16th (via the Syrian Network for Human Rights)

On the following day, August 17th, a further six to eight civilians died in an alleged Russian or regime airstrike on Deir Sharqi in Idlib. According to the Step News Agency, the victims were all members of one family, and Smart said that they were comprised of a mother and her six children. Multiple sources named the fatalities as Ibrahim Hamoud Al-Hamoud, Majd Hamoud Al-Hamoud, Mohammed Hamoud Al-Hamoud, Ahmad. Hamoud Hamoud, Hamsa Hamoud Hamoud, Hudaiba Hamoud Hamoud and, a woman, Ghada Hamoud Hamoud. While local reports predominantly attributed blame to the Syrian regime, a number accused both Russian and Assad forces in their reporting.

Idlib’s Ma’arat al Numan came under particularly heavy fire during August, with Airwars researchers tracking eight separate civilian harm incidents in the town linked to Russia. The most devastating of these occurred on August 28th when between nine and 13 civilians were locally reported killed in what sources referred to as “a massacre” carried out by Russian or regime warplanes. According to the Euphrates Post, the civilians killed included five brothers. The Step News Agency reported that “a Su-24 warplane dropped its cargo of eight vacuum rockets at once in Ma’aret al-Nu’man, killing 10 civilians, including five members of the family – a mother and her children”. 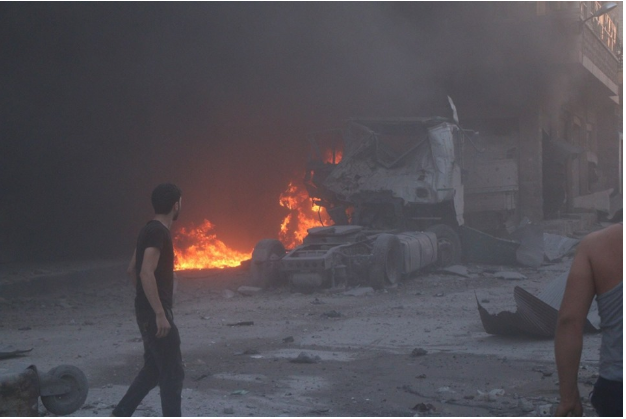 The aftermath of an alleged Russian airstrike on Ma’arat al Numan, August 28th 2019 (via White Helmets)

Libya saw another intense month of fighting in August, as the UN-backed Government of National Accord (GNA) and the Libyan National Army continued to battle each other for control of the country. Between 62 and 71 civilians were locally alleged killed, a decrease on July’s tally of  75 to 114 deaths. Airwars counted 143 reported air and artillery strikes, one more than in the previous month.

An alleged LNA or Emirati strike in Murzuq was by far the worst civilian harm event recorded in August. At least 42 civilians were reportedly killed on August 4th when an airstrike struck a town hall meeting.

The event again raised fears of the conflict spiralling out of control due to international involvement. Civilian harm was also reported from Turkish airstrikes in two events, supposedly killing two people near Sirte.

Altogether, most civilian casualties were attributed to LNA or Emirati strikes, with 53 to 60 deaths claimed between those allies. Between 6 and 8 deaths were also reported from GNA and Turkish strikes. As both sides to the fighting have become increasingly complex, it can often be difficult to distinguish who exactly conducted an airstrike, as both the GNA and LNA seem to rely exclusively on foreign air power now. 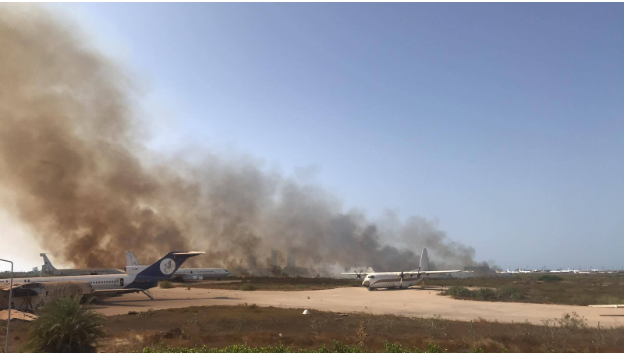 Between August 1st and 31st, the Coalition reported 24 strikes in Iraq – a fall of 27% on July’s 33 declared strikes. Additionally, it reported two strikes in Syria, up from the one strike conducted in the previous month. However additional ground operations and unilateral US actions also continued.

According to AFCENT, 218 munitions were dropped on Iraq and Syria from the air in August by the US-led Coalition. This represented a 108% jump on the 105 released in the previous month – and the greatest number of bombs and missiles fired since March 2019.

Our researchers tracked three civilian harm incidents linked to the Coalition in Syria during August, one less than in July. However, worryingly the civilian death toll rose on the previous month. Current estimates show that between seven and 37 civilians likely died in Coalition actions during August, compared to between four and 22 in July. Proportionally, a high number of Coalition civilian harm events are presently being reported per strike in Syria – suggesting either a change in tactics or a lowering of prioritised protections for non combatants.

Two of these three incidents were reportedly counter-terrorism raids. On August 1st, six civilians likely died in a raid on Baka’a village in the area of Tal Hamis, Hasakah. According to Khabour, “Two aircraft belonging to the International Alliance landed in the village of Beka`a, before heavy machine guns and rockets hit several houses in the village [….].The bombing led to the death of an entire Iraqi family, after the collapse of the house over their heads.” The source added that Coalition forces “withdrew immediately after the destruction of the house, without retrieving any bodies.” A report by Vedeng News said that two members of ISIS were arrested in a house.

On August 16th, two unidentified men were reportedly killed in another Coalition ground operation, this time in Al Man’iya in Raqqa governorate. According to Shaam News, the Coalition operation was “targeting two displaced families”. Suriye.u.a.d said that two “unidentified men” were killed, though their combat status is currently unclear.

The third, and most concerning incident, occurred on August 31st in Kafr Jalis, Idlib. CENTCOM confirmed that it had conducted a unilateral US airstrike on what was reportedly an Al-Qaeda command centre. Step News said that the strike killed 14 members of ISIS. However, local sources claimed that children and women from the families of members of ISIS living in the area were killed in the attack as well. The Syrian Human Rights Committee reported that 29 people were killed, identifying 22 by name, of whom six were children. Baladi meanwhile estimated a total death toll of 30, most of whom were buried under the rubble, while Alquds reported on a total of 51 dead, though it is unclear exactly how many of these were civilians.

US Africa Command declared that it had conducted just one airstrike in Somalia during August – the same number as July.

According to AFRICOM, the strike occurred on August 20th and targeted an al-Shabaab terrorist in the vicinity of Qunyo Barrow. The command said that one terrorist was killed, and that at this time it assessed that no civilians were killed or injured in this strike.

CENTCOM told Airwars that there were no US military strikes during the month of August in Yemen. The last declared US action was on June 24th in Al Bayda province.

However, on August 21st, a social report alleged that a “US drone airstrike targeted Al Qaeda base on the border of Al-Bayda and Marib governorates in Yemen”.

Airwars reached out to CENTCOM and asked if it had carried out this attack; CENTCOM reiterated that it “did not conduct any strikes in Yemen in August 2019”. This could, therefore, be a CIA strike.

US drone airstrike targeted Al Qaeda base on the border of Al-Bayda and Marib governorates in Yemen https://t.co/LuWXQdFiq1

There were no publicly alleged CIA strikes in Pakistan against either Al Qaeda or the Taliban during August. The last alleged strike was in August 2018.

At the end of August, the US led Coalition published its 33rd consecutive monthly civilian casualty report. This declared that “The Coalition conducted 34,580 strikes between August 2014 and the end of July 2019. During this period, based on information available, CJTF-OIR assesses at least 1,313 civilians have been unintentionally killed by Coalition actions since the beginning of Operation Inherent Resolve.”

The US-led alliance conceded just one new incident, which it said was an Airwars referral. Five civilians died at Karabla near al Qaim on August 23rd 2017, the Coalition now concluded.

The Airwars geolocation team had itself identified the site (34.376786, 41.060586) of a locally reported attack near an elementary school which killed five civilians, including three women. Those precise coordinates then helped the Coalition’s civilian casualty assessment team to determine it had in fact been responsible for the attack. 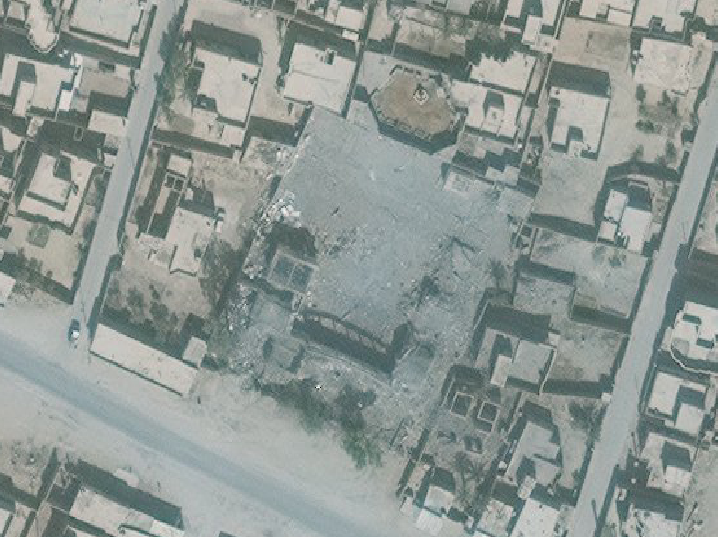 Original reports of the incident mention the area surrounding Al Mahdi (المهدي) Elementary School in the neighbourhood of Karabla (الكرابلة). Airwars was able to pinpoint the school – which helped Coalition assessors to conclude that its aircraft had indeed killed five civilians.

▲ The aftermath of an airstrike on Ma'arat al Numan in Syria, August 28th (via White Helmets)