While civilian harm from foreign actions in the conflicts monitored by Airwars mostly decreased during August, Ankara’s continuing air and ground campaign against Kurdish militants led to the worst reported civilian harm tally in northern Iraq from Turkish action since 2015.

Civilian harm incidents involving Russia in Syria (already at a low tempo) were less than half the previous month’s tally. Meanwhile the US-led Coalition continued its own operations against ISIS in Syria at a seemingly higher intensity, though with no local claims of civilian casualties.

Reported civilian harm incidents, as well as air and artillery strikes in Libya, saw a further significant decrease after warring parties continued their military stalemate at Sirte. Despite this – and increased international calls to end the fighting – both sides seemed unable to reach an agreement, with Khalifa Haftar’s LNA seemingly rejecting the Government of National Accord’s offer of a ceasefire.

Turkey in Syria and Iraq

Turkish-led actions against Kurdish irregulars in both Iraq and Syria continued throughout the month. Airwars researchers tracked 12 alleged civilian harm incidents in both countries during August – double the previous month’s tally and reflecting an escalation in Turkish actions. Five reported incidents took place in Syria, while seven occurred in Iraq. In total, between 12 and 18 civilians were alleged killed across all the locally reported events, and up to eight more were injured.

Additional civilian harm event took place in the village of Efdikê in western Tal Abyad on August 4th; in Qamishlo on August 6th; in Ain Issa on August 17th; and in Sheikh Hassan village in Raqqa Governorate on August 26th. The incident near Ain Issa caused the most civilian harm, with two civilians reportedly killed and two injured following Turkish shelling in the vicinity of the M4 highway.

Breaking
A civilian injured by a shell probably from a drone on Allaya neighborhood, east to #Qamishli, northeast #Syria, Sources from Internal Security Forces told pic.twitter.com/oMKhoMSAdw

The incident which reported the highest number of civilian deaths occurred in the Bradost region of Erbil province on August 11th. Five civilians were killed along with five Iraqi border guards, and five Kurdistan Workers Party (PKK) members, in one of the deadlist mass-casualty incidents involving Turkey this year. According to AFP, two high-ranking Iraqi military officers were additionally killed in the attack, prompting public outrage in Iraq. Following the event, Baghdad cancelled a visit by the Turkish Minister of Defence to Iraq, and summoned Turkey’s ambassador. 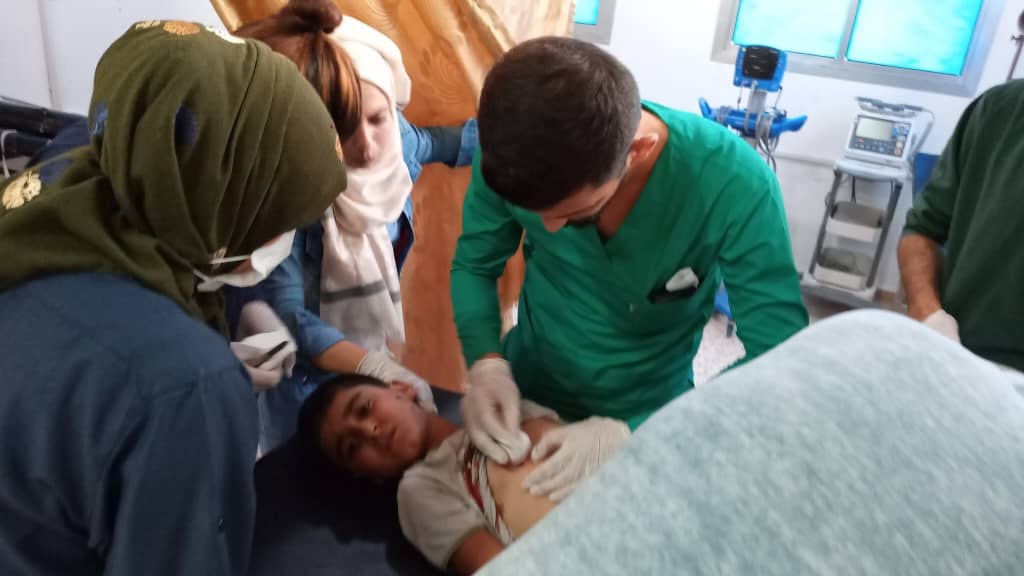 August 2020 once again saw relatively low levels of civilian harm from Russian actions in Syria. Airwars researchers tracked a total of three reported civilian harm incidents – less than half the previous month’s tally of eight civilian harm claims. According to local reports, between five and six civilians were killed and up to 11 more were injured in these latest attacks. Two of the incidents took place in Idlib Governorate, while one took place in Homs Governorate.

The first incident of the month took place in the town of Binnish on August 3rd, where three civilians from one family were killed and seven others were injured. According to STEP Agency, those killed were displaced civilians who were residing in camps in the area. Later, the Syrian Network for Human Rights revealed their names to be Majed Jasem al Muhammad, and two brothers, Zaid and Majed Mesleh al Muhammad from Burj village in the eastern countryside areas of Idlib. The apparent Russian strike was linked with artillery shelling carried out by Syrian regime forces in the same area.

The second incident took place on August 14th in the Syrian Badia, although reporting on this incident was scarce. According to local reports, Russian planes targeted a civilian car, wounding those in it.

On August 18th, Russian Major General Vyacheslav Gladkikh was killed on August 18th by an improvised explosive device that detonated under a convoy of Russian soldiers and Syrian pro-regime forces in the desert near the city of Deir Ezzor. Three other Russian military personnel were wounded and a local commander of Syria’s National Defense Forces was also reportedly killed in the attack. The killings prompted several days of continuous Russian strikes against ISIS targets in the eastern Homs countryside; in southern and western Raqqa governorate; and in Deir Ezzor.

The final civilian harm incident tracked by Airwars took place on August 30th after shrapnel from a Russian strike fell on a displacement camp near the village of al-Sheikh Bahr in the Armanaz area of Idlib, reportedly injuring an unspecified number of civilians. 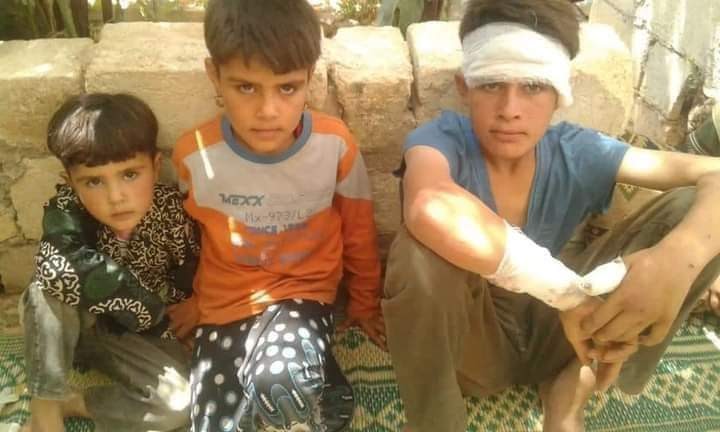 The children of Majed Mesleh al Muhammad, killed by a reported Russian airstrike in Binnish on August 3rd (via @abuhuzaifa_)

US-led Coalition in Iraq and Syria

The month of August saw no locally reported civilian harm incidents involving the US-led Coalition in Syria. This was the second recent month in a row where no civilian harm claims were made against the International Coalition. However, US-led Coalition actions in Syria continued throughout the month, in conjunction with local partners.

According to the International Coalition’s Strike Summary Report for August 2020, the alliance conducted six strikes in Syria against ISIS targets throughout the month, a slight increase on the four strikes conducted in July. Throughout August, the Syrian Democratic Forces (SDF) also continued to carry out anti-ISIS operations. The SDF confirmed for example that on August 7th, they were able to capture eight ISIS militants in a major operation in Deir Ezzor, following air support from the US-led Coalition.

.@CJTFOIR air strike in support of our security partners, 20 Aug. in Iraq🇮🇶. The @coalition provides aviation, intelligence and logistical support to @modmiliq in the fight to #DefeatDaesh https://t.co/FDpoeWGqGr

Meanwhile, reports of unilateral US airstrikes were reported throughout the month. On August 13th, a drone targeted a car in the town of Sarmada. Local sources reported that Abu Yahya Al Uzbaki, a leading figure in the al Qaeda linked group Huras al-Din, was killed in this attack. There were conflicting reports about whether the drone strike was conducted by the International Coalition, or unilaterally by the United States.

Tensions later flared up between Regime forces and the US-led Coalition in the town of Tal al Zahab in Qamishli’s countryside areas in northern Hasakah Governorate. This came as a result of clashes between both sides on August 17th. According to local sources, the Coalition launched airstrikes that targeted regime forces, killing two members. However, the Coalition, in an official statement, denied launching an airstrike in the area saying that its routine patrol came under fire at the time and that Coalition troops returned fire in self-defence.

Meanwhile in Iraq, the International Coalition was significantly more active. The alliance declared 11 strikes against Daesh targets which it said consisted of 36 engagements, killing nine suspected ISIS militants. The Coalition confirmed it had conducted strikes in Wadi al-Tharthar, in the Qara Chokh Mountains; and at Tarmiyah, north of Baghdad, in a bid to provide air cover for Iraqi Special Forces in their own operations against ISIS. 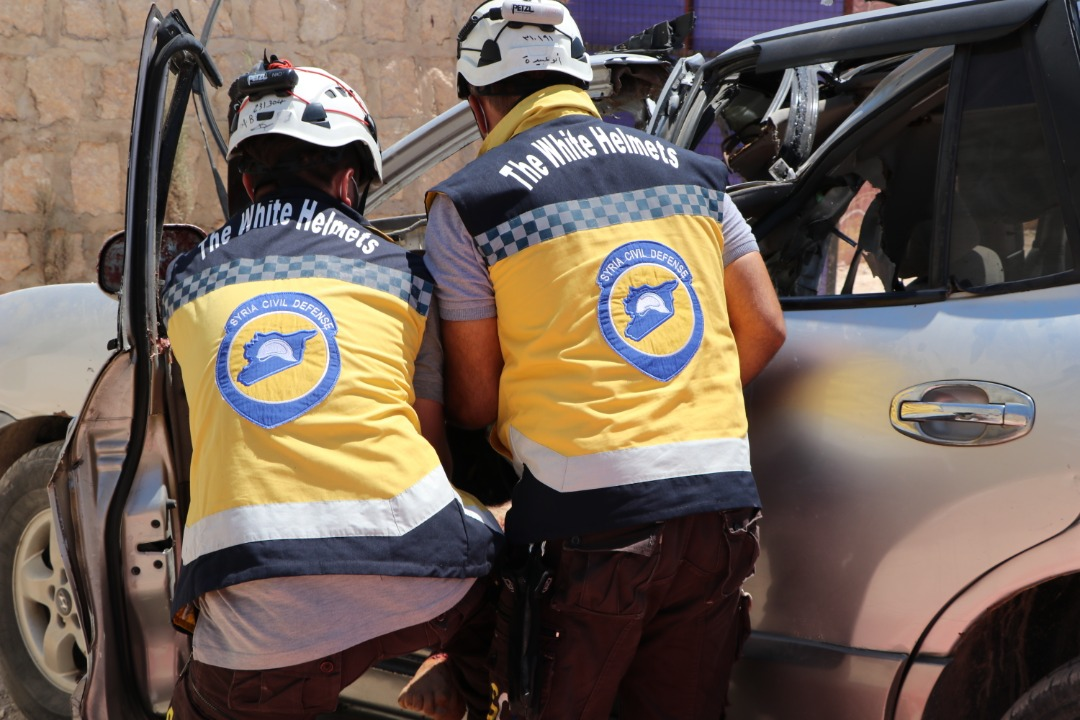 The number of air and artillery strikes in Libya once again dropped in August as most parties to the fighting abided by a ceasefire deal. Only seven strikes were locally reported, two less than in July. No civilian harm was reported from any of these actions.

Six of the strikes were allegedly conducted by the Libyan National Army (LNA), while one Government of National Accord (GNA) attack was reported.

Reports continued that both sides were continuing to re-arm, even as international efforts to secure a lasting peace continued. 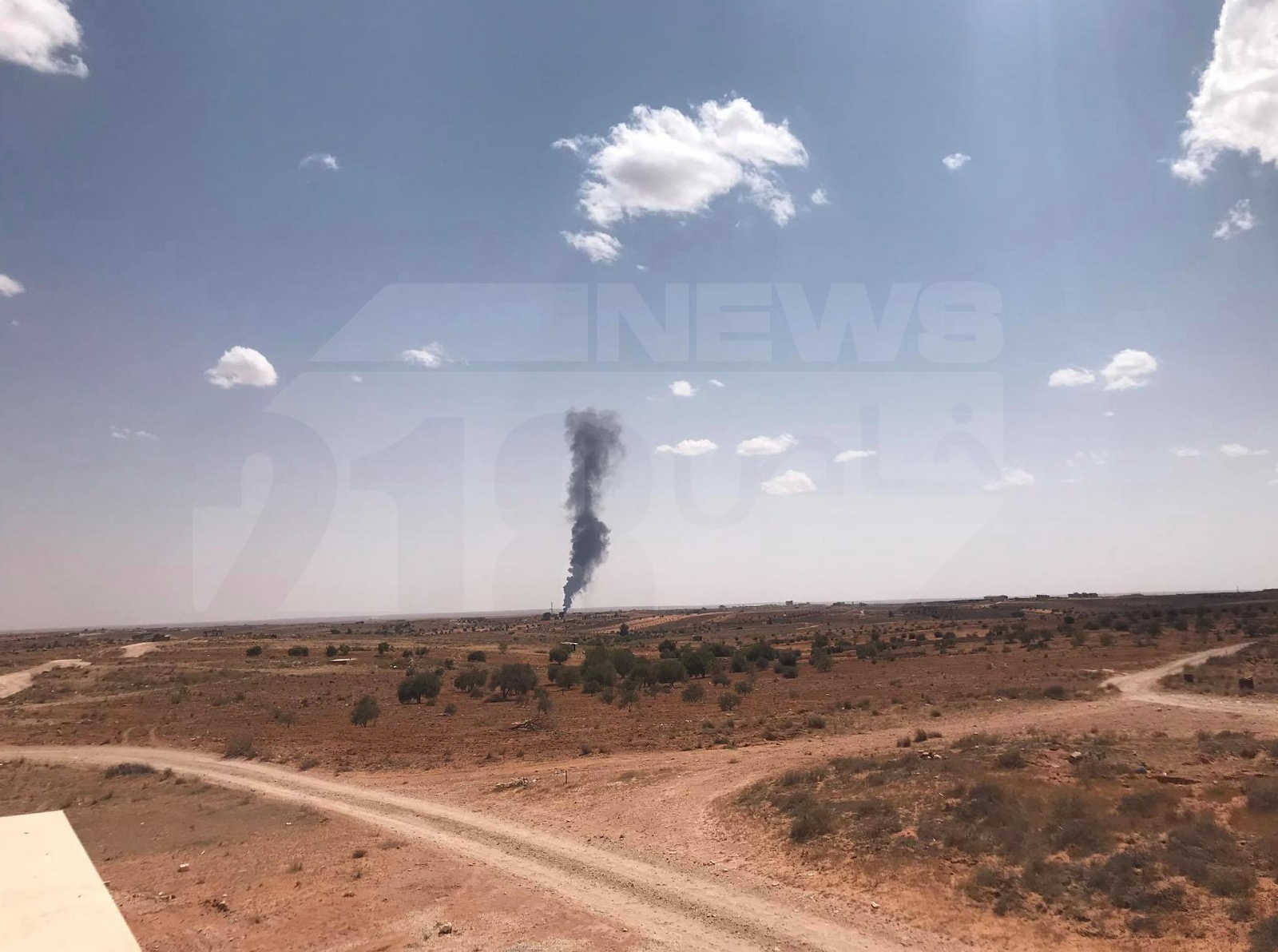 Smoke rising after an alleged GNA drone strike on fuel smugglers near Zintan on August 12th, 2020 (via 218TV)

Airwars recorded five reported US actions in Somalia in August, one more than in the previous month.

On August 8th two US strikes were claimed by local sources – one in Haway and the other in Sablale, allegedly killing one senior Al Shabaab operative in each. However AFRICOM denied conducting the strikes, leaving open the possibility either of an AMISOM or CIA operation..

Twelve days later, the US confirmed conducting an airstrike on al Shabaab near Kurtun Warey. An “unnamed senior member of the group’s local bomb-making and IED explosives unit was killed in the strike”, according to VOA.

An August 24th US strike in combination with US and Somali ground operations killed six Al Shabaab fighters and injured three more near Darusalaam in Lower Shabelle, AFRICOM said. Al Shabaab claimed that US service members had been injured in the fighting, an allegation which Africa Command later rebutted.

One day later Sheikh Abduqadir Kumandos, an Al Shabaab senior leader was killed by a confirmed US strike near Saakow.

According to CENTCOM, there were no US military strikes during August 2020 in Yemen.

The last publicly declared CENTCOM action was on June 24th 2019 in Al Bayda province. Airwars researchers also tracked no local claims of US actions in Yemen during the month.

There were no publicly alleged CIA strikes in Pakistan against either Al Qaeda or the Taliban during August 2020. The last such reported US strike was in August 2018.

The Integrated Review is a strategic look by the UK Government at its foreign policy objectives, along with its future defence, security and international development strategies. During August, Airwars and our UK partners continued discussions and the sharing of policy ideas, in preparation for our evidence submission to the Integrated Review.

During August, Airwars continued building a coalition of partners in Belgium. Given that Belgium has been one of the least transparent countries in the International Coalition against ISIS, and there are no accountability mechanisms in place for potential civilian casualties, Airwars aims to conduct a collective engagement approach with the Belgian government to improve its poor track record in this regard. The initial steps of the joint advocacy approach will be discussed at the roundtable scheduled for early September.

For the sixth successive month, the US-led Coalition in Iraq and Syria conceded no additional civilian harm during August from its long running war against ISIS.

▲ The family of civilian Khalid Ebdulrehman who was killed in a reported Turkish drone strike in Kani Masi, Dohuk on August 19th (Image via Rudaw)