The month of February saw Russian airstrikes again ravage northwestern Syria, as the Syrian Regime continued its offensive in the governorates of Idlib and western Aleppo. For the first half of the month, Russia’s air campaign focused heavily on western Aleppo as regime forces attempted to capture the last remaining territory held by Syrian rebels in the province. The air campaign allowed Regime forces, on February 7th, to push through and take the strategic city of Saraqib, which had served as a bastion against the Assad Government since the early days of the Syrian Revolution. Meanwhile, heavy bombardment in western Aleppo allowed government forces to sweep through and take the last remaining rebel-held areas in Aleppo’s western periphery on February 16th, for the first time in over seven years.

In total, Airwars tracked 109 civilian harm events locally reported during the month of February that were both solely and partially attributed to Russia. Of these strikes, 52 targeted areas in Aleppo, while 57 took place in Idlib governorate.

This represented a nine per cent rise on the 100 events tracked in January 2020. In total, across these 109 new incidents, between 182 and 226 civilians were allegedly killed by Russian strikes – a notable increase from January, when between 145 and 213 civilians were allegedly killed. Among the victims were as many as 55 children and 32 women. Up to 404 further non-combatants were reportedly wounded during the month by Russian military actions.

The tempo of strikes and civilian harm were at their most intense at the beginning of the month, as Syrian regime forces made their most significant advances of the campaign in Idlib and Aleppo. There were an average of 5.5 daily alleged civilian harm incidents in the first week of February. This intensity somewhat lowered as the month wore on to 3.6 daily civilian harm allegations in the last week of the month.

Civilian deaths in Aleppo and Idlib spiked between February 8th and 11th and again on February 25th and 26th, as locals reported a series of mass casualty incidents. In the two days of February 25th-26th alone, Airwars researchers monitored up to 42 civilian deaths and as many as 81 injuries.

The city of Idlib saw two of the most significant mass casualty incidents of the month. On February 6th, Russain warplanes allegedly targeted a van in the Sheikh Thulth neighbourhood killing at least ten people including an ambulance driver, and wounding three others. Just five days later, a deadly airstrike reportedly carried out by Russian warplanes hit the al-Sinaa neighbourhood in Idlib, killing as many as 16 civilians and injuring up to 33 more – the worst incident recorded in the month of February. According to SMART News Agency, among those who perished were seven children. Jala Street and the industrial zones in the al-Sinaa neighbourhood were reportedly reduced to rubble following the deadly attack. 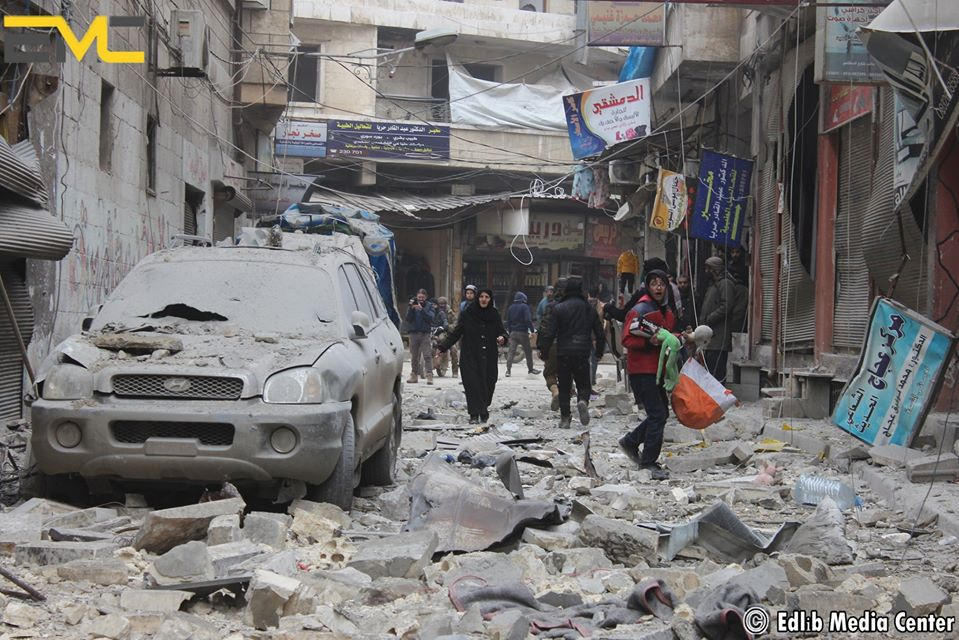 Children were also among the main victims of mass casualty attacks in western Aleppo province. In the village of Abin Samaan, up to 12 civilians were killed, including six children; and up to 20 others were wounded in a series of four airstrikes allegedly carried out by Russian warplanes on a residential area of the village. Abin Samaan had reportedly been a refuge to hundreds of displaced persons fleeing conflict in the province.

The indiscriminate aerial bombardment of Idlib and Aleppo also resulted in another catastrophic wave of displacement. According to the United Nations Office for the Coordination of Humanitarian Affairs, by the end of February, at least 950,000 people were forced from their homes as a direct result of the offensive, which began in December.

In February, Turkey took a more active role in the conflict in northwestern Syria, beginning with retaliation against the Syrian Regime’s attacks on Turkish soldiers, and artillery support for Syrian rebel counter-offensives against the Assad Government’s advances – actions which slowly escalated into a fully-fledged military operation in Idlib against Damascus.

By February 12th, Turkey had stationed 30,000 troops at the Syrian border, and sent 5,000 soldiers as reinforcements to Idlib as well as establishing new defensive positions around Idlib city, bringing the total number of troops in the governorate to 9,000. However, a joint Russian-Syrian airstrike on a Turkish Army convoy in Balyun, which killed at least 34 Turkish soldiers – the single deadliest attack on Turkish forces since the start of their involvement in the Syrian Civil War – proved to be a key turning point, and resulted in the beginning of Operation Spring Shield. On February 28th, the Turkish Ministry of Defence claimed that it had struck 200 Syrian Government targets and killed 309 allied forces throughout Greater Idlib, forcing Russia and the Syrian Government to agree to new ceasefire terms.

Coinciding with Turkey’s increased involvement in the conflict in Syria, six of the nine  Turkish-led civilian harm allegations took place in the last week of the month. On February 25th, local Kurdsh news outlets reported that the Turkish army and allied forces shelled the village of Aqiba, killing three civilians and injuring three others. All those killed were from the same family: Seroşet Mihemed Hesen (12 years old), Fatma Ali (46 years old) and Hesen Izet Mihemed (55 years old).

A few days later, on February 28th, Turkish forces stationed at the Sheikh Nasser base reportedly launched rocket attacks on various areas in the town of al-Arima, west of Manbij. The attack also targeted Regime forces, killing four soldiers and injuring at least five others. 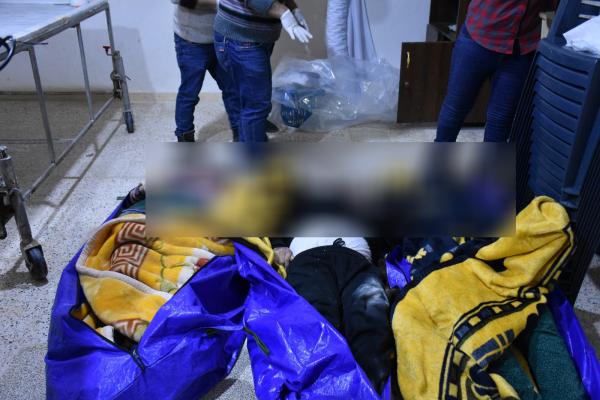 Airwars researchers tracked four alleged civilian harm incidents linked to Kurdish counterfire actions in Syria in February, twice the number of cases reported in January. However, despite this increase, there was only civilian death reported, compared to the five deaths tracked the previous month. Additionally, between 22 and 24 civilians were reportedly injured as a result of YPG actions.

On that same day, another civilian harm incident took place in the village of al-Mihsinli near the city of Jarablus in eastern Aleppo, where up to three civilians were injured. The next day saw another attack on Azaz, injuring four civilians, including a woman and three children.

Images of the damage caused by an alleged YPG rocket attack on a school in northern Aleppo, February 4th 2020

The US-led Coalition in Iraq and Syria

On February 12th, the US-led Coalition was blamed for one civilian harm event in the Khirbet Amo area in the city of Qamishli, in Syria’s Hasaka province. According to local reports, the incident occurred after Coalition forces on patrol encountered a Syrian Regime checkpoint, whereupon dozens of locals began protesting the presence of US-led forces in the area. According to SANA, a pro-regime outlet, locals then began throwing stones at the patrol vehicles. According to reports by Shabha Press, some of the protesters were carrying light weapons This reportedly prompted Coalition forces to open fire, killing a civilian and wounding another.

The Coalition declared a total of 18 strikes in Syria and Iraq in the month of February. In Iraq, 10 strikes were conducted against ISIS targets, killing 16 militants, CJTFOIR asserted. Meanwhile in Syria, the Coalition launched eight strikes against ISIS targets. Airwars did not track any other unilateral strikes carried out by the US during the month.

According to AFCENT, 85 munitions were fired from the air over Iraq and Syria during the month. This represented a 25% increase from January, where only 68 munitions were released.

The number of civilian casualties from air and artillery rose slightly in Libya compared to January. Between 18 and 23 civilian deaths were reported, marking a 13% increase on the previous month. This was despite the number of reported strikes falling by 32%, from 189 to 128.

The Libyan National Army (LNA) allegedly conducted 46 of these actions, leading to between 8 and 13 civilian deaths. In the worst incident, between two and three civilians were reportedly killed by shelling on the Al Shok area of Tripoli on February 4th.

The Government of National Accord (GNA) and Turkey conducted 15 air and artillery strikes in February, according to local sources. One of the attacks led to civilian casualties, when a Turkish drone allegedly killed five civilians from one family in Castelverde on February 27th.

As the majority of strikes in Libya were allegedly being conducted by artillery at this time – continuing a trend from late January – it has become increasingly difficult to determine responsibility. A further 61 strikes were conducted by unknown forces; and another six were contested between the GNA and LNA. Between them, these led to five reported civilian deaths.

February was again marked by blatant violations of the UN arms embargo by both the UAE and Turkey. The continued fighting also led to a temporary suspension of ceasefire talks between the GNA and LNA.

Civilian being treated after injury sustained from alleged LNA shelling on Tripoli on February 4th, 2020 (via Tk Yahroug Kl shy).

On February 25th, Airwars published a major new resource for Somalia, tracking declared and alleged US counter terrorism actions in the country since 2007.

The nine month review identified significantly higher levels of locally reported civilian harm than previously thought, with up to 280 non combatants allegedly killed in US actions since 2007. Declared US actions and reported militant deaths were also sharply up.

For February 2020 only, Airwars tracked 14 claimed US actions in Somalia, all of which were publicly declared by US Africa Command. Among these were four locally alleged civilian harm events, which between them were said to have killed two civilians and injured seven others.

In the worst incident, a young disabled woman locally named as Nurto Kusow Omar Abukar died and three of her relatives were injured, after a US strike allegedly hit the town of Jilib in Middle Juba on February 2nd.

CENTCOM told Airwars that there were no US military strikes during February 2020 in Yemen. The last publicly declared CENTCOM action was on June 24th 2019 in Al Bayda province. Airwars researchers reported no US actions in Yemen during the month.

There were no publicly alleged CIA strikes in Pakistan against either Al Qaeda or the Taliban during January. The last such alleged strike was in August 2018.

Airwars deputy director Dmytro Chupryna presented in Poland at the 13th Europe-Ukraine Forum, titled ‘New Possibilities, New Threats’, on February 2nd-4th. Dmytro was on the discussion panel ‘Strength lays in numbers’, which aimed to explore security dilemmas in Central and Eastern Europe. The conversation focused on how a data-focused approach can help change military narratives in understanding civilian harm and broader protection of civilians, defence and security-related issues.

On February 6th, Airwars also published an interview by our Dutch conflict researcher and advocacy officer Laurie Treffers, with the authors of Missie F-16. The book interviewed pilots who were active as part of the US-led Coalition against ISIS and deals – surprisingly frankly – with pilot concern about civilian harm. The interview illustrated the likelihood that greater transparency could also significantly improve the experience of pilots once they return from the battlefield.

In February, Airwars director, Chris Woods participated in the conference ‘Conflict Reporting in the 21st Century’, organised by Action of Armed Violence (AOAV) and Birkbeck, University of London. This brought together leading conflict reporters, academics, photojournalists, film makers and investigators to discuss the main challenges and issues facing contemporary conflict reporting. Chris presented at the session ‘Civilians in modern war’ explaining the concept of all source monitoring and the vital work of Airwars into civilian harm from military actions. 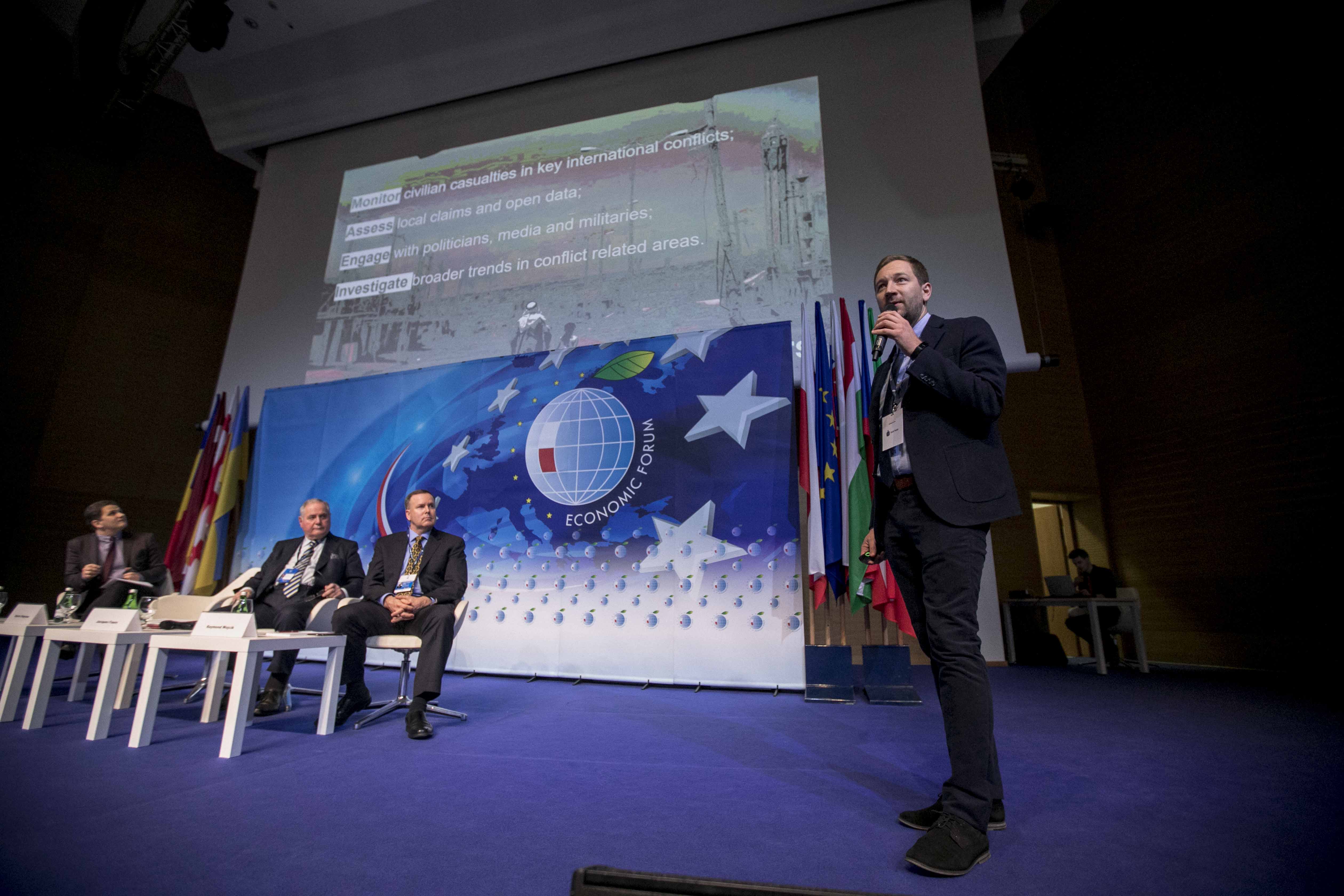 ▲ Civil defence volunteers look for survivors under the rubble, following a suspected Russian strike in southern Idlib on February 25th 2020 (via White Helmets)