July was another terrible month for civilians trapped in Idlib and Hama governorates, as the Russian-backed Assad offensive continued to intensify. In total, Airwars tracked 121 separate alleged civilian harm incidents, three more than in June. Some 82% of these events were in Idlib governorate and 16% in Hama. There were also three incidents reported in Aleppo.

The volume of allegations meant that, once more, at time of publication Airwars was still researching and assessing July’s civilian harm incidents. However, unrefined estimates show that across these 121 incidents, up to 432 civilians were allegedly killed by Russian and/or regime actions. That tally included at least 63 children and 42 women. As many as 800 additional civilians were reportedly injured. As Airwars researchers uncover further information on these events, it is likely that this death toll will rise.

July saw a number of disturbing mass casualty incidents in Idlib, where scores of civilians reportedly died. The chaotic situation meant that in the majority of events (78%) it was impossible to determine whether Russia or the regime were responsible for deaths – with frequent and conflicting claims against both belligerents.

On July 5th, between 7 and 16 civilians were reported killed and up to 24 more wounded in airstrikes on Mhambel in Idlib, according to local media. The Syrian Network for Human Rights – which blamed regime missiles and barrel bombs – named the children Arij, Saher and Samer Abdul Qader Abdul Aal, along with their father and their mother Yasmin Taher Hafyan among those slain, adding that the shelling resulted in “fires and destruction of homes and property, forcing large numbers of people to flee.” While eleven sources pointed to the regime, some others named both Russia and the regime as responsible. 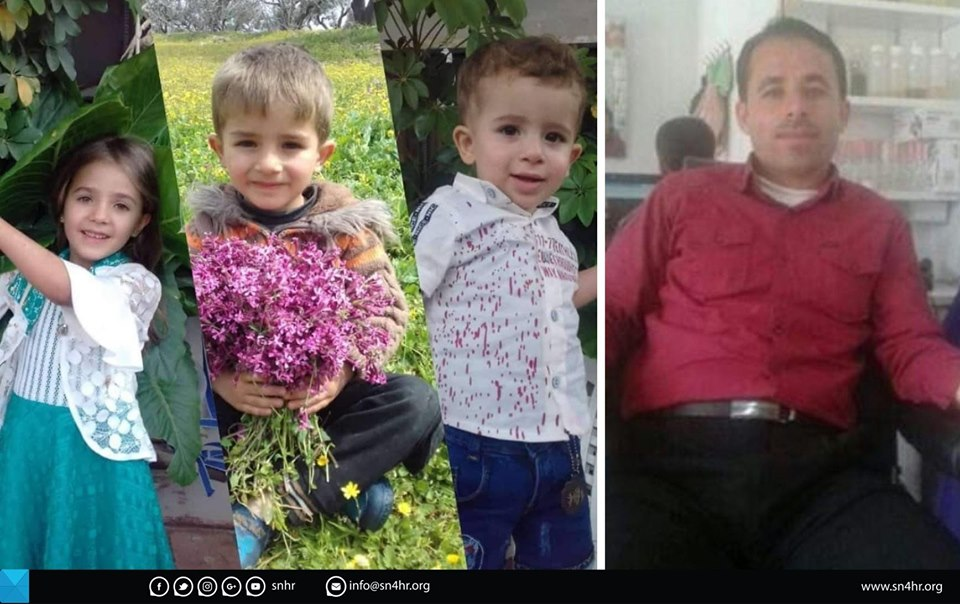 The children Arij, Saher and Samer Abdul Qader Abdul Aal were killed along with their father and their mother Yasmin Taher Hafyan in an alleged regime barrel bombing in Mhambel town, Idlib, July 5th (via Syrian Network for Human Rights)

Civilian homes repeatedly came under fire during the month. On July 16th, between eight and 12 civilians died in alleged regime or Russian airstrikes on Ma`ar Shourien in Idlib. Shaam News referred to the incident as “a massacre”, while Syria u.a.d said that the regime had struck a market, resulting in “30 dead and wounded”. 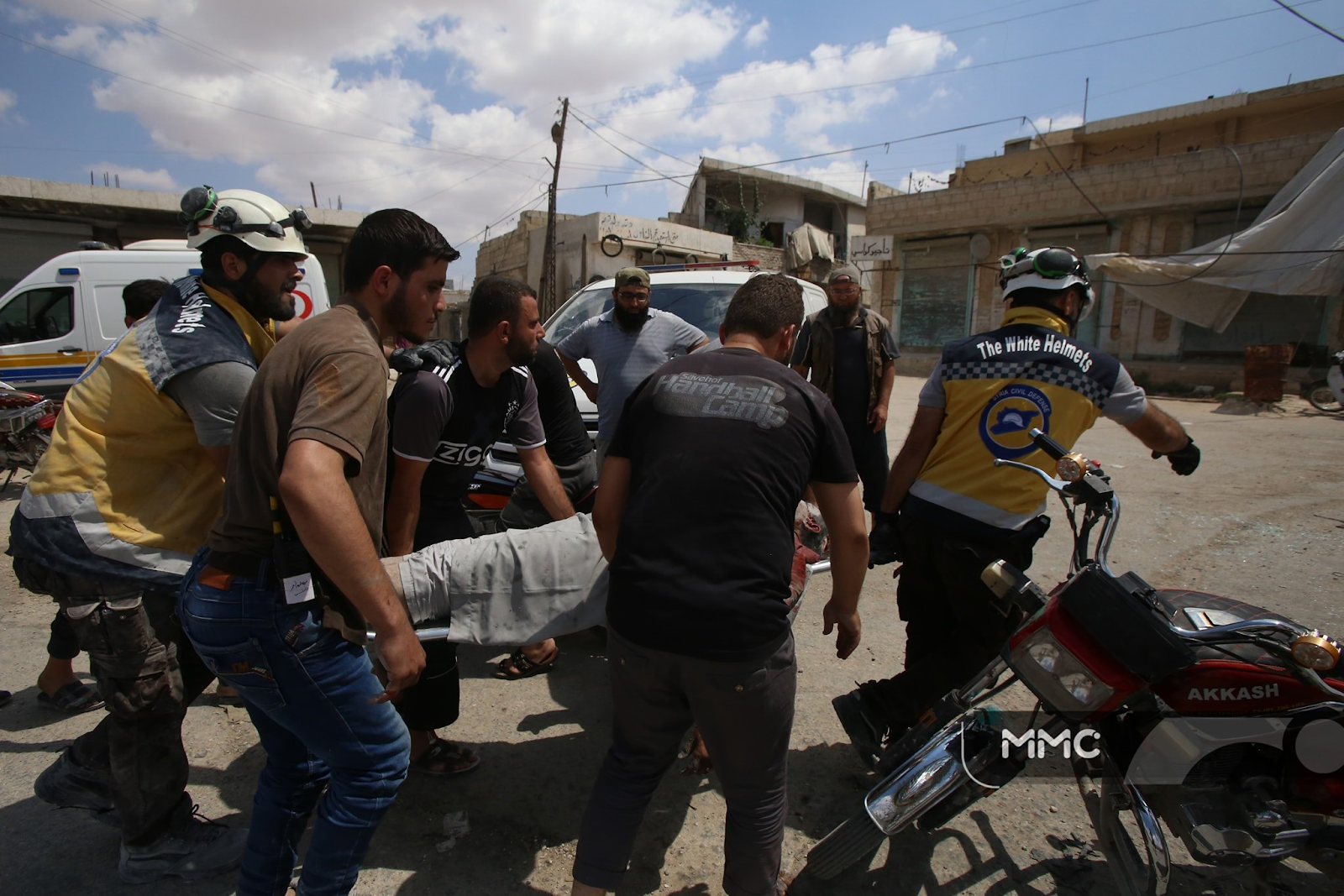 The White Helmets attend the scene of a strike on Ma`ar Shourien, Idlib, July 16th (via Macro Media Centre)

Much worse was to come on July 22nd with another alleged Russian or regime airstrike on both a market and civilian homes, this time in Ma’arat Al Nu’man. The final death toll spanned between 25 and 42 civilians, with up to 80 more wounded. The Syrian Observatory for Human Rights referred to the incident as “the biggest massacre since the beginning of the violent escalation at the end of last April”.

Footage from the aftermath of the alleged Russian/regime strike on a market in Ma’arat Al Nu’man, July 22nd.

Libya witnessed a sharp increase in civilian casualties in July, largely due to a devastating strike on a migrant detention in Tajoura on July 3rd that killed at least 53 civilians. The incident marked the worst case of civilian harm in the North African country since 2011.

Blame for the event was apportioned to the rebel Libyan National Army (LNA) by most sources, with the rival, UN-backed Government of National Accord (GNA) claiming it was in fact conducted by an Emirati F-16 in support of the LNA.

According to local sources, GNA strikes also killed between 6 and 10 civilians in July. Ally Turkey, which reportedly increased air support for the UN-backed government, was allegedly responsible for at least one civilian death in  a drone strike.

Altogether, between 75 and 114 civilians were reportedly killed by 141 air and artillery strikes in Libya in July. This marked a significant increase on the 6 to 14 deaths resulting from 116 monitored strikes in June.

Between July 2nd and July 31st, the Coalition reported 33 strikes in Iraq – an increase on the 13 strikes conducted within the previous four week period. Additionally, the Coalition reported one strike in Syria, the first publicly declared action in that country since May 4th.However ground raids and Special Forces actions have also continued – which are often not reported.

According to AFCENT, 105 munitions were dropped on Iraq and Syria from the air in July by the Coalition – a 22% fall on the 135 released in the previous month. 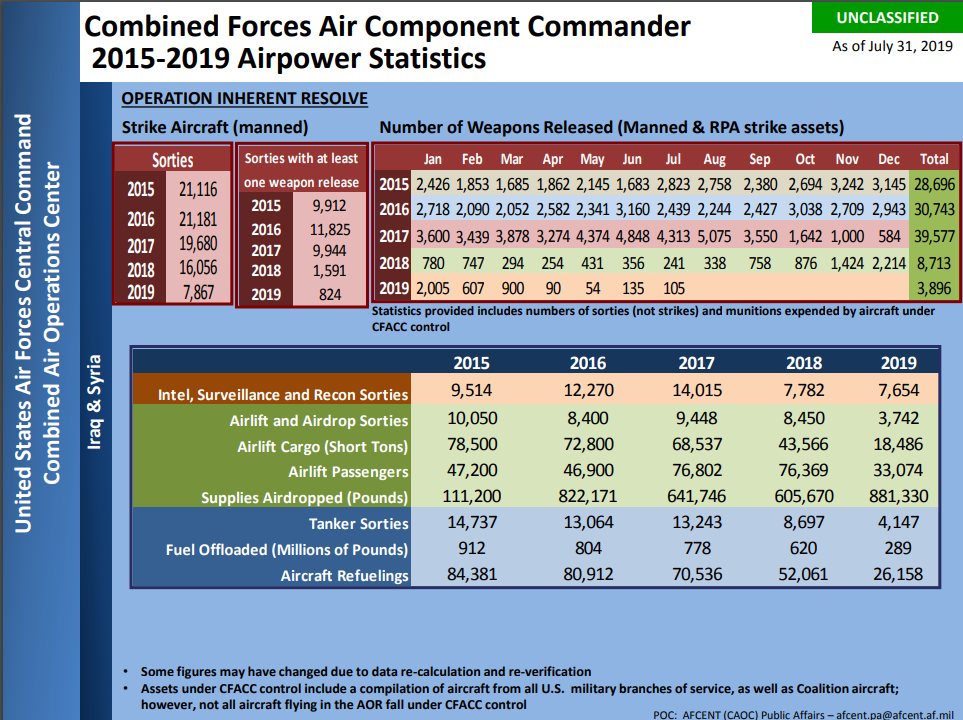 However, with the US-led alliance still refusing to give the locations of its strikes, it remains impossible to  to assess where or on which specific dates these strikes occurred – and for Airwars to cross-match any potential civilian harm events. This was particularly worrying in July, a month in which Airwars tracked four incidents of civilian harm in Syria allegedly linked to US-led Coalition forces.

On July 13th, local media reported that Abed Abdullah al-Numan, a shepherd from the town of Al Tayana, was killed by an alleged Coalition airstrike when he was out working in the Faltih desert (Badit Faltih), north of Deir Ezzor, near the Syrian-Iraqi border. The Syrian Network for Human Rights said that the aircraft responsible was “without a pilot”, while Suriye u.a.d blamed a Coalition helicopter. 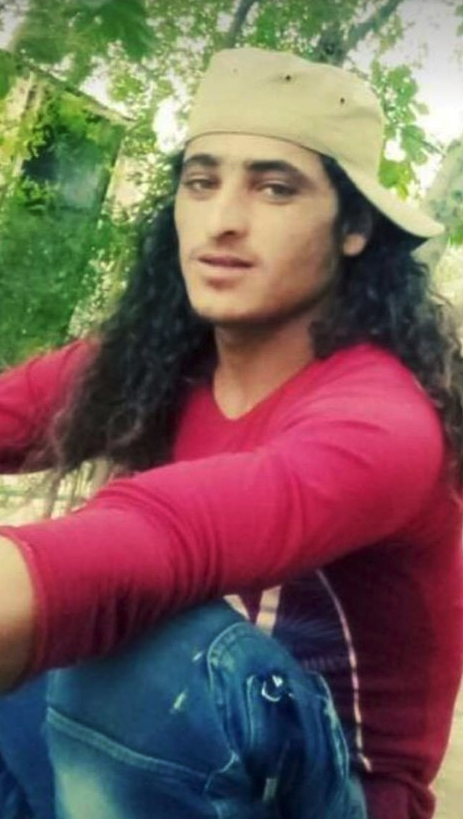 Shepherd Abed Abdullah al-Numan was out with his sheep when he was struck by an alleged Coalition airstrike at Badit Faltih, north of Deir Ezzor – near the Syrian-Iraqi border, on July 13th (image via Euphrates Post).

On July 29th, alleged Coalition airstrikes on the Al Zer area of Deir Ezzor claimed the lives of a number of people and injured others, although it is unclear from reports whether they were combatants or non-combatants. According to the Syrian Observatory for Human Rights, the Coalition targeted an ISIS cell in hiding, killing five members. However Baladi reported that the victims were civilians, naming them as “Abdul Karim Mohammed al-Wattb, the son of Hussein al-Hindula, and a young man from the town of Zer”.

Additionally, between two and 15 civilians died in a counter-terrorism raid on Al Takaihi near Al Basira town, Deir Ezzor, on July 16th. The Coalition reportedly struck the house of an ISIS leader, Ragheb Hussein al-Hindoura, at dawn after he refused to surrender when the house was besieged by the SDF. According to Deir Ezzor 24, 15 civilians in the adjacent house were killed, though Euphrates Post dismissed claims of civilian harm, reporting that only Ragheb Hussein al-Hindoura was killed – and his wife injured. Orient News noted that the Coalition had carried out “dozens of landings in the countryside of Deir Ezzor, targeting elements, leaders and cells”.

There was one other civilian harm event linked to the Coalition. On July 4th, a child was reported killed and another wounded in a collision with a Coalition vehicle in Al Hasakah. According to Halab Today, the two children were on a motorcycle which collided with a Coalition vehicle on patrol. Kurdstreet News and Rojava052 claimed that the vehicle belonged to French forces. Hani Al Afin, a 12-year-old, was reportedly killed, while 15-year-old Yasser Abdul-Baki suffered concussion.

US Africa Command declared that it had conducted just one airstrike in Somalia during July – a sharp fall from the six strikes carried out in the previous month.

The strike occurred on July 27th against ISIS terrorists in the Golis mountains region in northern Somalia, reportedly killing one terrorist. AFRICOM currently assesses that no civilians were harmed in this strike.

US Army General Stephen J. Townsend – who had previously led the US-led Coalition against ISIS in Iraq and Syria – took charge of AFRICOM in a ceremony on July 27th, replacing General Thomas D. Waldhauser, who had led the command since 2016.

CENTCOM told Airwars that there were no US military strikes during the month of July in Yemen. The last declared US action was on June 24th in Al Bayda province.

It is unknown whether the CIA separately carried out any attacks in Yemen during July.

There were no publicly alleged CIA strikes in Pakistan against either Al Qaeda or the Taliban during July. The last alleged strike was in July 2018.

Airwars UK Advocacy Officer Chloe Skinner, and Deputy Director Dmytro Chupryna, met with a representative from the Foreign and Commonwealth Office in July, as part of our ongoing engagement with the forthcoming review of the UK’s ‘Protection of Civilians in Armed Conflict’ policy paper.

During the meeting, Airwars made a number of  recommendations for inclusion within the prospective review. These included the improvement of assessment processes to better monitor civilian harm resulting from military actions; the establishment of Civilian Casualty (CIVCAS) Teams during UK conflicts; the appointment of a senior civilian within the military with responsibility for non combatant harm issues; the need for military engagement with external sources, and the reconciliation of public reports of harm; a commitment to better practice based on a lessons learned approach; and the need for annual reporting on civilian casualties resulting from UK actions to Parliament.

Airwars maintains that the proper assessment and reporting of those civilians killed in UK military actions – and a lessons learned approach informed by those fatalities – is a baseline requirement for an update to a paper focused upon the protection of civilians. Airwars will continue to engage in this ongoing process.

During July, the US-led Coalition conceded two additional civilian harm events during the war against ISIS – admitting two deaths and three injuries. This brought the admitted Coalition tally since 2014 to at least 1,321 civilian fatalities.

The Coalition also dismissed as ‘Non Credible’ some 62 additional cases, most of which were referrals from the Amnesty International/ Airwars investigation into the US-led assault on Raqqa in 2017, in which at least 1,600 civilian deaths likely resulting from Coalition actions were highlighted.

▲ The aftermath of an alleged Russian or regime airstrike on civilian homes and a market in Ma’arat Al Nu’man, July 22nd (via Syria Civil Defense)