Between January 1st and 31st 2016, a total of 177 reported civilian casualty incidents in Syria allegedly involving Russian aircraft have been tracked by our researchers. These allege between them an overall total of between 1,006 and 1,410 non-combatant deaths. Each event is individually recorded in our new 50,000-word public database for January 2016.

Claims are drawn from monitoring groups which include the Syrian Network for Human Rights, the Syrian Observatory for Human Rights, the Violations Documentation Center; Raqaa is Being Slaughtered Silently and the White Helmets. Reports have also been assessed from media and social media sites; from militant and rebel groups; and from local, regional and international NGOs and news organisations. These have been cross checked where possible against official Russian military releases.

Moscow has so far denied killing any civilians in its continuing air campaign in Syria. Despite this assertion, it is our provisional view at Airwars that between January 1st and January 31st 2016, between 713 and 974 civilian non-combatants are likely to have been killed by Russia in 103 Syrian incidents where there is fair reporting publicly available of an event – and where Russian strikes appear to have taken place in the vicinity.

These are not anonymous numbers. Monitoring groups and local sources have named 740 civilian victims between them for January alone. More than 1,007 civilians are also credibly reported injured in the 103 events we assess as likely having involved Russian aircraft.

A significant proportion (27%) of the 177 incidents allegedly involving Russia is contested – where it remains unclear whether Russia or other parties were responsible. Between 232 and 347 civilians reportedly died in these 47 contested events. The question here is not whether civilians died – the public record almost always indicates that they did – but only whether Russia or the Assad regime was responsible.

Two claimed incidents may instead have involved Coalition rather than Russian aircraft according to reports – an indicator of the chaotic situation in Syria today. Between 14 and 18 civilians died in these alleged events.

A further 47 likely civilian deaths are attributed to 24 alleged Russian airstrikes which are presently weakly reported or single-sourced. Finally, one event, in Mayer on January 15th, has in our view been discounted, ie is highly unlikely to have involved Russian aircraft, or did not occur.

In at least 103 of the 177 events we have assessed for January 2016, it appears that Russian strikes most likely killed civilians. Between them, these events reportedly killed at least 713 civilian non-combatants.

This represents a doubling in the number of likely deaths seen from Russian strikes, with Airwars analysis for September to December 2015 suggesting an average of 365 civilians killed in each of those months.

There was also a 45% rise in the number of reported incidents in January compared with December 2015, when 122 incidents were tracked.

January also saw a 55% increase in the number of civilians injured in alleged Russian strikes – a reasonable indicator of the low-precision munitions still favoured by Moscow, as well its often indiscriminate bombing of civilian areas. 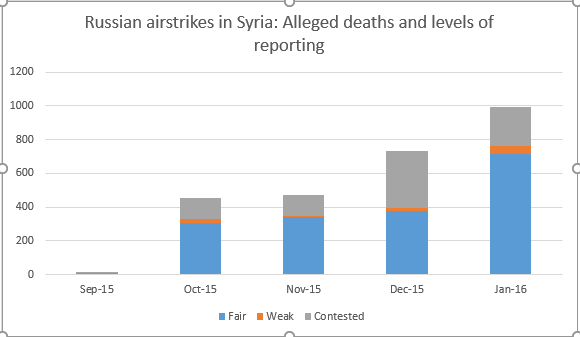 Women and children at greater risk

Equally alarming was the steep rise in the number of women and children reported killed by Russia, across the 103 incidents which Airwars has assessed as likely.

Our provisional view is that a minimum of 198 children died in Russian airstrikes in January 2016 alone – an increase of 157% on the 77 likely child deaths in December 2015. We also assess that at least 105 women were killed by Russia in January – an increase of 128% on December’s 46 reported fatalities.

High numbers of deaths frequently occurred during multiple strikes on a single day. On January 16th for example, a minimum of 32 children and 36 women likely died in Russian strikes in Aleppo (11 incidents alone), Damascus, Deir ez Zor and Idlib governorates.

There were also frequent and credible reports of entire families killed. A particularly bloody event on January 22nd in Al Tabiya Jazeera, Deir-ez Zor, likely killed between 10 and 16 children and 4 to 8 women.

An initial report by Deir Ezzor is Being Slaughtered Silently said two Russian strikes had led to the deaths of four civilian families in their entirety. With predictions that the death toll may climb as high as 50, victims were buried in a mass grave. Sixty more civilians were reported injured, many of them in a “critical condition“. Shaam News identified those killed by Russia as the “family of Abdul-Jabbar Mustafa, the family of Farhan Jaafar Al Nakas and the family Salloum Ramadan Al Saleh.“ 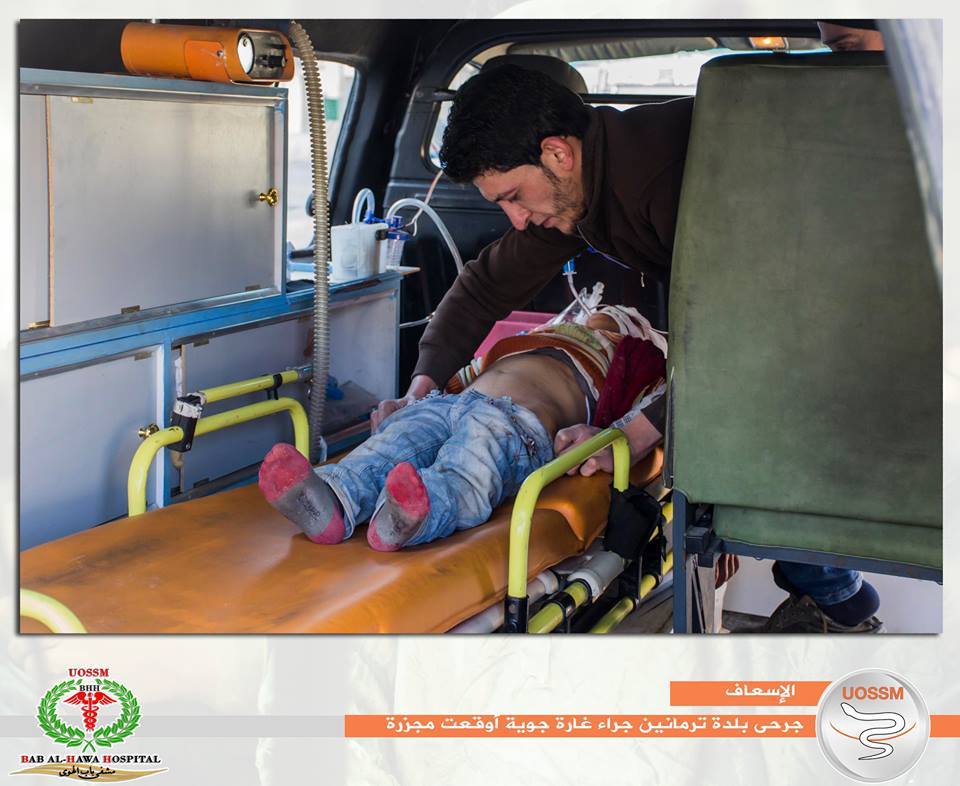 A wounded child is placed in an ambulance after an alleged Russian airstrike on Termanin, January 25th 2016 (via Shaam News)

January saw the highest number of reported mass casualty incidents graded by Airwars as ‘likely’ – that is, with most field reports pointing to Moscow – since Russia began its Syria campaign in September 2015.

Overall, in 31 days of Russian airstrikes there were seven alleged Russian mass casualty events in which 20 or more civilians reportedly died. Between them they likely killed 264 to 370 civilians.

On January 9th, a minimum of 53 civilians died and more than 200 were injured in alleged Russian strikes on Maarat al Numan, Idlib, according to numerous local sources. Activists said a courthouse and prison belonging to the Al-Nusra Front was targeted, resulting in massive destruction and the deaths of all who were at the site or around it.

The Syrian Network for Human Rights initially blamed the Assad regime. But a later detailed report concluded Russian warplanes were responsible, and that 67 people had died including three women.

In its own report of military strikes published on January 11th, the Kremlin confirms carrying out actions in Idlib governorate during this period: “In the course of 10 days of the year 2016, the Russian aircraft have performed 311 combat sorties engaging 1097 objects in the Aleppo, Idlib, Latakia, Hama, Homs, Damascus, Deir ez-Zor, Hasakah, Daraa, and Raqqah provinces.“ 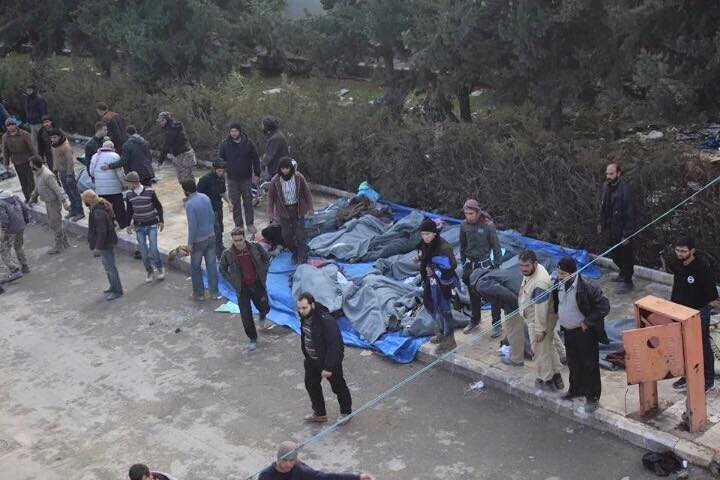 As the month of January continued, the frequency and severity of casualty events increased –  with an average of five incidents being reported each day overall.

An analysis of the locations of those 103 likely incidents indicates that – just as during Russia’s September blitz – the governorates of Aleppo and Deir Ezzor were heavily targeted. Some 46 likely events (45%) occurred in Aleppo, while 31 incidents (30%) were in Deir Ezzor. Idlib was the next worse hit, with 12 incidents (12%) reported.

On January 11th in Anjara, Aleppo for example, between 15 and 30 civilians including six women and at least five children died in alleged Russian airstrikes targeting schools, according to multiple sources. The Syrian Network for Human Rights reported that Russian warplanes struck the Mustafa Ruston elementary school in the morning. Shaam News said three schools were targeted and put the death toll at 30 – most of them children. 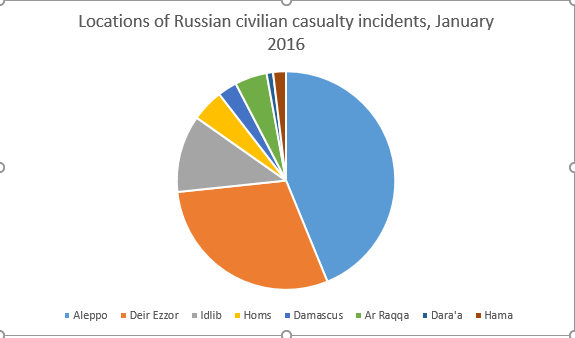 Almost half: As this Airwars chart demonstrates, 45% of incidents likely involving Russia were reported in Aleppo – clearly showing that the governorate was being deliberately targeted.

In one of the worst days tracked by our researchers, January 21st 2016 saw 13 separate alleged Russian incidents. Five were in Raqqa, targeting the neighborhoods of Saif al Dawla, Al Mashab, Al Amassi, the Al Salam hospital and the area near the power directorate. Of these, Airwars assesses three as having likely involved Russian aircraft, while two are graded as “contested”, with some reports alleged involvement by the Assad regime. In the three likely Russian events in Raqqa that day, a minimum of 27 civilians including 10 children and eight women died.

Two days later, and January 23rd saw the greatest number of non-combatants killed in any one incident since the beginning of Russia’s involvement in Syria. Between 61 and 90 civilians – including 11 children – were killed in Khusam, Deir Ezzor. According to Deir Ezzor is Being Slaughtered Silently Russian aircraft targeted the center of the village near a clinic. Other sources also blamed Russia, though there were some questions about whether the Assad regime was partly responsible. Airwars presently lists the names of 67 of the dead at Khusam.

In a military report published on 25th January, the Kremlin admitted using heavy bombers on Deir Ezzor: “Crews of Tu-22M3 long-range bombers performed 18 combat sorties from the territory of the Russian Federation in order to engage manpower and hardware of the ISIS near Deir ez-Zor on January 22-24. Flight range reached more than 2,000 kilometers.“ 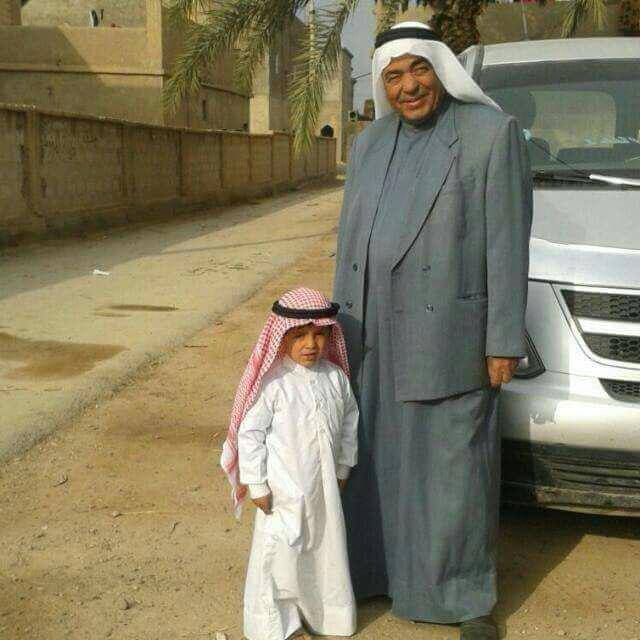 Ghazi Al Doulab (right) was killed with his wife, two of his daughters-in-law and at least 57 other civilians in a likely Russian strike on Khusham, January 23rd 2016 (via Deir Ezzor is Being Slaughtered Silently)

By the end of the month fatalities had spiraled, with bombing reaching a particularly fierce intensity in the week of Jan 25th to 31st, during which Aleppo and Deir ez Zor were repeatedly bombed.

Similarly, in Aleppo we tracked six incidents at multiple locations on January 29th, killing a minimum of 25 civilians, before Russian warplanes allegedly returned the following day to carry out further strikes.

Overall, there were 57 events alone reported in this week. We assess 39 of these as likely being Russian – with a minimum of 195 civilians killed, or 27% of the minimum likely fatalities for the entire month. 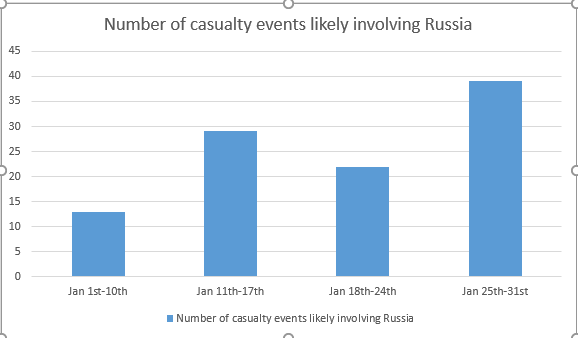 January was the most intense month of Russian airstrikes in Syria that Airwars has so far fully assessed, with bombings pulverizing opposition-held areas in northern and western Syria.

Between January 1st and 31st 2016, the public record indicates that Russian airstrikes in Syria killed an estimated 713 or more non-combatants. This is more than 13 times the number of civilians credibly reported killed by the Coalition across Iraq and Syria during the same month.

This higher civilian fatality rate can in part be explained by Russia’s extensive use of so called ‘dumb’ bombs (unguided weapons.) With less precision, more explosives are needed to achieve the same effect – leading in turn to greater non-combatant deaths and injuries.

However, our January database of casualty events also clearly indicates that Moscow was deliberately targeting civilian locations: 75% of alleged casualty cases occurred in just two governorates: Aleppo and Deir Ezzor. Of these, almost half were in Aleppo city itself.

Overall, the evidence from the ground in January 2016 points at Russia continuing to place a far lower value on civilian lives in Syria during this period than the Coalition – with its relentless and deliberate air campaign having a devastating impact on civilian communities. 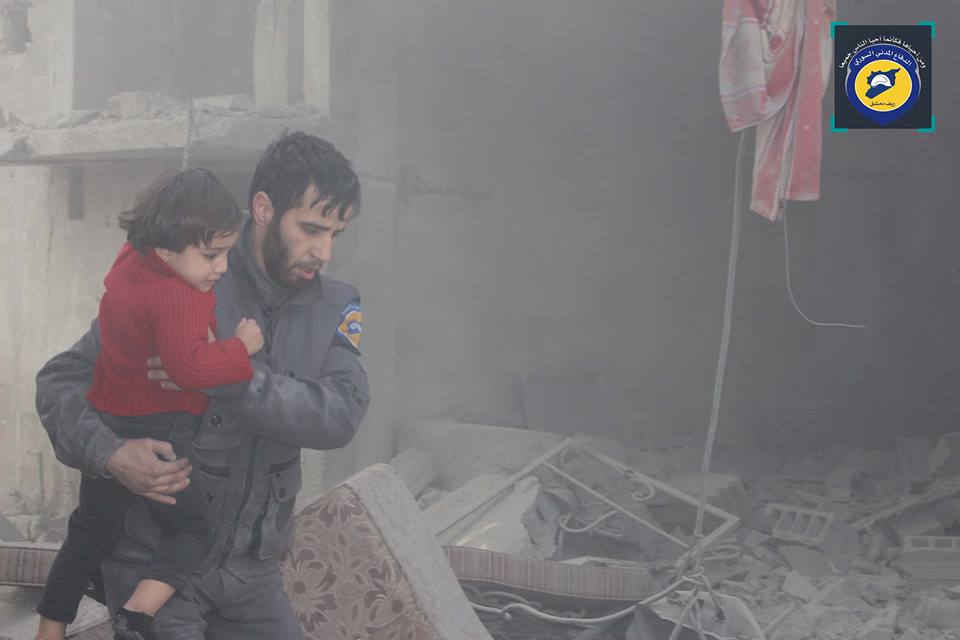 A member of the White Helmets rescues a child following a likely Russian airstrike on Dayr al Asafeer, January 12th 2016 (via White Helmets)

▲ The aftermath of an airstrike on Raqqa, Jan 21st (via Raqqa is Being Slaughtered Silently)