Recent improvements in the US military’s reporting of civilian casualties from Iraq and Syria remain in place, despite a transition of presidential power from Barack Obama to Donald Trump – with one senior US military official indicating to Airwars that it is ‘business as usual’ so far.

A total of 26 new civilian deaths from Iraqi and Syrian airstrikes have so far been admitted in 2017 by the Coalition, with details continuing to be published in regular monthly civilian casualty releases.

These latest confirmations bring to 199 the number of civilian deaths so far conceded in the 30-month international campaign against so-called Islamic State – all from US actions, according to officials. None of Washington’s twelve allies in the Coalition has so far admitted causing any civilian casualties – despite more than 3,800 airstrikes between them.

The Coalition’s January 2017 report contains details of 24 alleged civilian casualty events dating back to September 2015. Five of these incidents – all of which took place in November 2016 – are confirmed as having killed 15 civilians between them.

The Coalition provides sparse details on the five new admitted cases in its January report – though the public record is often clearer. On November 21st, a dawn US airstrike on al Salhiyeh village in Syria killed up to ten civilians according to local sources. Raqqa is Being Slaughtered named the family as “Mustapha al Farwa [pictured below] and his wife, and two of his daughters and one of his sons Mohammed Mustapha al Farwa.” Also reported killed were Mohammad Al Ahmad al Hraiwal, and Abd al Rahman Al Abd al Karim al Zagheer (or Abboud Al Abd al Karim).

ISIL’s media wing said at the time that the target of the raid was a cotton factory in the village where three workers also died, while Ara News cited a local activist as saying that “the raids came after false information came to the Coalition that the factory is used for the manufacture of [ISIL] weapons.” Syria News Desk said there were six raids on the village in total – which also injured 13 civilians.

The US now admits responsibility though only confirms two deaths, noting that “During a strike on ISIL-held buildings it is assessed that two civilians were unintentionally killed.”

This disparity between the number of civilian fatalities admitted by the Coalition – and the number of deaths credibly reported by public sources – shows the limits of air-only monitoring. While the Coalition now admits 199 deaths from 71 events, the public record suggests at least 369 civilians died in these same incidents.

As Airwars noted in its recent transparency audit Limited Accountability, “any [military] assessments which focus overly on internal intelligence – particularly on air-only analysis – are likely to miss the majority of credibly reported civilian fatalities from airstrikes.” In short, the Coalition confirms only what its analysts are able to see from above. 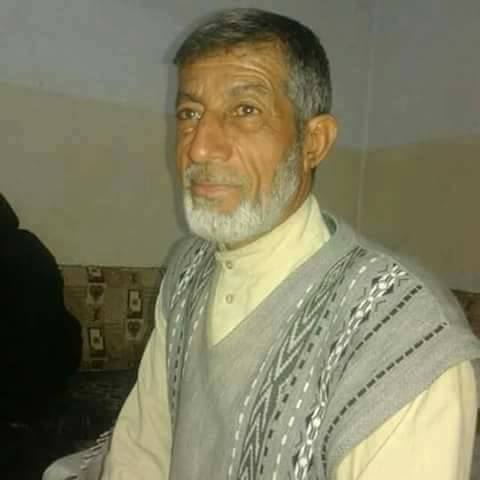 The four other cases admitted by the Coalition in its January 2017 report were identified only as a result of internal reporting by pilots and analysts – with Airwars unable to identify any public reports of civilian deaths at the time.

On November 6th 2016 for example, the US now says it killed seven civilians near Shahid-Yunis in Iraq, during an airstrike in support of the Mosul offensive. “During a strike on ISIL fighters in a moving vehicle it is assessed that seven civilians were unintentionally killed when the targeted vehicle came into close proximity to two stationary vehicles just prior to the munition’s impact.”

Despite an extensive search of local media and social media channels, Airwars has been unable to find any public reports of these seven deaths – a reflection of the ongoing challenges the Mosul campaign presents to casualty monitors.

In the January report, 13 additional claimed incidents are dismissed as ‘not credible’ by the Coalition, which adds the following clarification: “Non-credible means that at this time there is not sufficient information available to assess that, more likely than not, a Coalition strike resulted in civilian casualties.”

However, the Coalition has since admitted to Airwars that an unspecified number of friendly tribal forces were actually killed in one of these ‘non credible’ events.

On October 5th 2016, up to 21 tribal Sunni fighters of the Hashd al-Ashayeri militia – allied with the Iraq government – were reported killed in a Coalition action. Militia leader Sheikh Nazhan Sakher Al Lahib said at the time that his fighters died after they took refuge in a house in Haj Ali during a struggle with ISIL, at which point the Coalition accidentally bombed them.

An investigation was announced by Coalition commander General D.J. Anderson that same day, who noted: “We are aware of the alleged reports that Coalition forces mistakenly fired on Sunni tribal fighters.  As will all allegations received, we are looking into this to determine the facts that surround the case.“

In its January report the Coalition dismissed the incident as ‘Not Credible’ – noting that “After a review of available information and strike video it was assessed that no civilians were harmed in this strike.” In a followup note to Airwars, a senior Coalition official added: “Allegation was based on regional media reports of tribal fighters and possible civilians killed by strike. This is a CIVCAS report. There were no civilians killed in this strike.” Only when asked for further clarification did the official concede “It was assessed that tribal forces were killed in this strike.”

At least three of the cases dismissed in January’s casualty report were the result of allegations by Russia against the Coalition.

Russian foreign ministry officials in Geneva issued a document in November 2016 alleging a number of such incidents – including a claimed Coalition attack on an MSF hospital in Syria’s Idlib province. “On 15 February 2016 the airstrike by the US-led coalition was delivered on the ‘Medecins sans frontierès’ hospital near the Maared al-Nuuman village. As a result of this attack 9 people were killed and 26 wounded,” Moscow claimed.

Not mentioned was the fact that Russia itself was accused by almost all local sources of having caried out the hospital attack – which killed as many as 26 civilians.

Shaam News Network said Russian warplanes conducted four consecutive strikes on the MSF hospital, and that the Health Directorate in Iblib had issued a statement which said the first attack was at 9am which severely damaged the building. “The planes came back and targeted the hospital again when  rescue teams had arrived to look for survivors.” According to the Health Directorate, eight of those killed were staff of the hospital. Al Jazeera put the death toll at 18, including nine doctors.

Dismissing any role in the hospital attack, the US and its allies drily note in their January 2017 report: “No Coalition strikes were conducted on that day in the geographic area of the reported civilian casualties.” Two other Russian allegations in and around Mosul in October were dismissed on similar grounds.

So many allegations were made by Russia at the time that the Coalition’s chief spokesman noted in a tweet: “@CJTFOIR found 10 Russian CIVCAS allegations against coaliton in the last 24 hrs. We will assess, but smells like a #firehoseoffalsehood.” 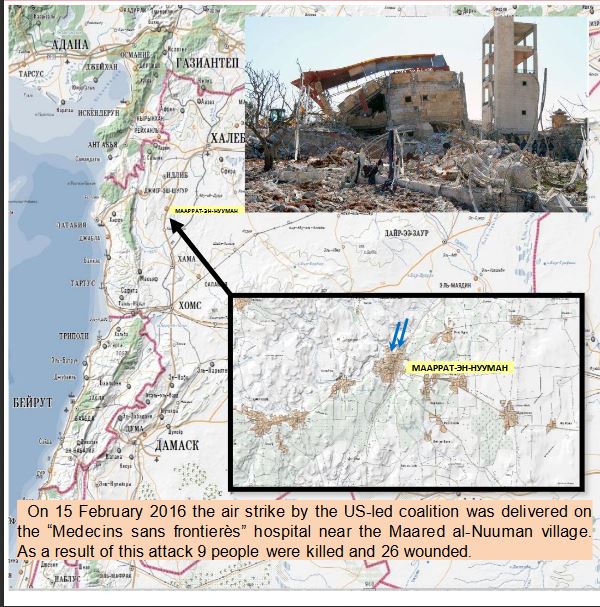 The Coalition’s February 2017 report  – which deals primarily with alleged events in December – contains brief details of 22 alleged incidents. Four cases are confirmed, with eight more cases dismissed as ‘non-credible’. A further ten cases – one dating back 16 months – remain under assessment.

Of the four admitted events, only one was previously known to Airwars researchers. On December 7th 2016, a strike on “a compound occupied by ISIL fighters” at al Msheirfa in Syria led to the deaths of two nearby families. The Coalition itself now admits that seven civilians were “unintentionally killed” in that attack.

Between 11 and 20 civilians in fact died according to local sources, including the families of Rajab Al-Ali Al-Hilal Al-Taweel and Ahmad Al-Rajab Al-Askan. ISIL’s media wing placed the toll higher still, reporting “20 killed in an American air raid targeting with four missiles civilian homes in the village.”

The three other events conceded by the Coalition in February are known only because of internal reporting by pilots and analysts. During a December 9th 2016 strike on Mosul for example, the Coalition now states that “during a strike on ISIL construction equipment in the process of repairing cratered roads it is assessed that two civilians were unintentionally killed by the munition’s strike blast when they entered the target area just prior to the munition’s impact.”

Overall, of 71 civilian casualty events conceded by the Coalition from the beginning of the war to February 2017, more than half (37 cases) were identified only via such self-reporting by military personnel. While this does show that US pilots and analysts are coming forward and reporting problem events, it also makes clear that the Coalition’s civilian casualty monitoring remains heavily skewed against credible public reports. Hundreds of alleged casualty incidents have still to be properly assessed and investigated by the US-led alliance.

Airwars itself estimates that as of February 8th, the Coalition had likely killed between 2,350 and 3,455 civilians in Iraq and Syria – far above the alliance’s admitted tally of 199 deaths. This suggests that the Coalition is under-reporting more than 90 per cent of civilian deaths from its war against ISIL.

By way of example, the Coalition publicly lists only twelve claimed incidents for December 2016 – far fewer than the number of publicly alleged events for that month. As part of its ongoing advocacy work, Airwars alerted the Coalition to 39 alleged incidents for December, including reported casualty figures and approximate GPS locations. According to officials, 14 of these claimed events have since been deemed not credible. Five additional cases have now been sent for review, along with 11 cases already under assessment. And the Coalition has requested additional details relating to a further nine reported  events.