In July the Coalition campaign to liberate the northern Syrian town of Manbij in Aleppo built towards a fierce conclusion. Daesh continued to lose ground, but the effect on civilian casualties was significant. We tracked the greatest number of alleged deaths and incidents in any given month since the war began two years ago – despite just one likely event in Iraq. Probable deaths from Coalition airstrikes were at similar levels to those reported for Russia during the Spring.

Russian airstrikes also continued to pulverize opposition-held areas in northern and western Syria – with hundreds of non-combatants reported killed. A total of 120 alleged incidents of concern were reported for July alone.

The 13 allies between them dropped 2,411 bombs and missiles against Daesh in July, a 24% per cent decrease in the number of munitions released compared with June.

The US remained the dominant Coalition partner in both Iraq and Syria. Indeed strikes conducted by the UK fell in July, with the RAF carrying out 58 strikes in Iraq (a decrease of 19% on June) and five in Syria (a decrease of 44%.)

The UK’s strikes in Syria were all around Manbij and the so-called Mar’a line. In all but one of these five strikes the RAF used armed drones (Reapers). However, overall reported use of Reapers fell by 60% from June.

After the UK, France remained the next most active Coalition partner. However its activities also declined in Iraq, with 31 strikes declared in July (a fall of 23%). France conducted just two strikes in Syria – both near Raqqa.

Belgium has rejoined the air war – this time in both Iraq and Syria – after taking over from the Netherlands. On July 5th, France reported a joint raid with Belgium in Mosul. But Brussels itself – the least transparent of all Coalition partners – has yet to declare any airstrikes itself since the campaign resumed. 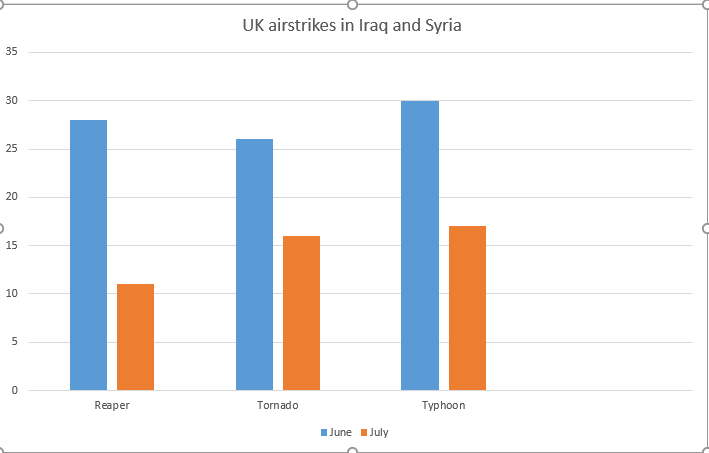 Significant drop: Airwars graph showing the number of UK airstrikes conducted by Reapers, Tornados and Typhoons across June and July 2016

For the first time in 18 months Coalition airstrikes in Syria outweighed those conducted in Iraq. There were 332 strikes in Iraq (a drop of 31% from June) and 352 in Syria (a decrease of 6% from June).

The major Coalition campaign at Manbij – which began on May 21st to liberate the ISIL-occupied town in northern Syria – reached a heavy pace. Some 282 strikes were reported in the vicinity (80% of all declared strikes in Syria).

On July 15th, the Syrian Arab Coalition (aka Syrian Democratic Forces) began moving towards the centre of Manbij, recapturing a “significant amount of the city” and enabling some civilians to escape.

However, the UN warned that the situation in Manbij was deteriorating further, with 30,000 to 40,000 combatants still caught up in the siege.

Meanwhile, in Iraq, efforts were focused on clearing the Daesh-controlled towns of Qayyarah and Sarqat, in preparation for the eventual battle of Mosul. 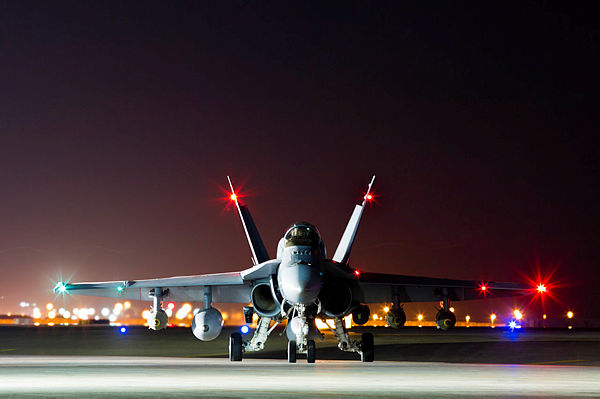 An RAAF F/A-18A Hornet prepares to depart on a mission to strike a ‘Daesh headquarters compound’ in Mosul, Iraq, from Australia’s main base in the Middle East (Australian MoD)

July saw the highest tally of civilian casualty events so far reported in the war. Overall, there were 47 alleged civilian casualty incidents – an increase of 38% from June. A total of 311 to 509 non-combatant deaths were claimed in these events.

Airwars presently assesses 28 of these 47 events as fairly reported: that is with two or more credible sources, and Coalition strikes confirmed in the near vicinity. Between 208 and 387 civilians are presently assessed as likely having been killed in these incidents, compared with between 110 and 180 deaths in June.

As already noted, July 2016 saw the highest number of alleged civilian fatalities and events since the air war began in August 2014. In Syria 40 incidents were reported – an increase of 83% from the 19 claimed events we tracked in June. Between 198 and 368 alleged fatalities are presently assessed as being likely by Airwars, most in the vicnity of Manbij.

One likely reason for this sharp rise is a reported loosening of the rules of engagement. The Coalition is now prepared to accept up to 10 non-combatant casualties in any one action, according to reports.

On July 19th,in what may be the single greatest loss of life from a Coalition action in the first two years of its war against Daesh, between 78 and 203 civilians were reported killed in a catastrophic event at the village of Tokhar in which victims were shown being buried in mass graves.

Manbij Mother of the World was the first to report the event. It initially put the death toll at 25, which swiftly rose to 56 then 59 civilians, before finally settling at 203 killed.  The Airwars incident report presently names 78 victims.

The US’s northern Syria proxy the SDF said it had supplied the intelligence for the Tokhar strike, though had thought no civilians were present. The SDF also accused local monitoring groups of fabricating civilian casualty claims in order to aid ISIL and discredit Kurdish forces.

In contrast, the US’s former proxy the Free Syrian Army condemned the Coalition for “the horrific massacres committed”. The Assad regime instead claimed French aircraft were responsible, though Paris has declared no strikes in the vicinity. 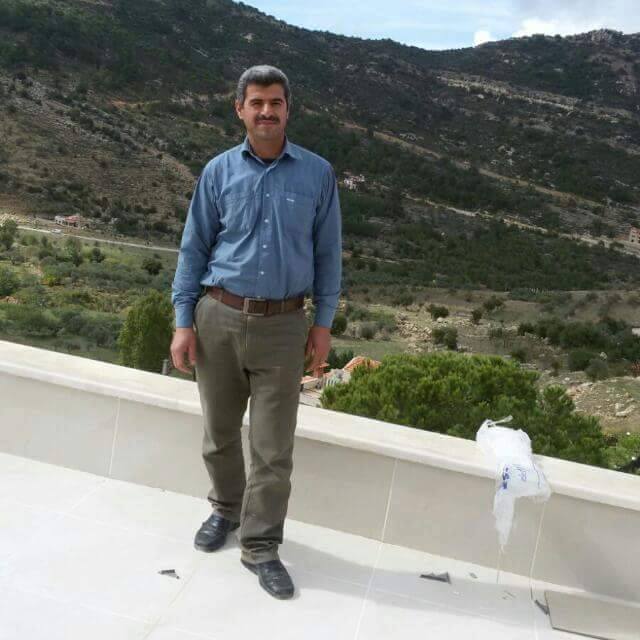 Bakkar al Ramadan – one of 78 named civilians so far identified by local groups as having died at al Tokhar in a US airstrike on July 19th 2016. Seven members of Mr al Ramadan’s family also reportedly died with him, including six children (via Manbij Tokhar)

For July 18th-19th, the Coalition admitted carrying out strikes on buildings and vehicles at Tokhar, but initially scorned ‘wild’ claims of 173 deaths.

However after an international outcry, the US announced on July 27th that it was launching an investigation. Based on current delays, the results are unlikely to be known until early 2017.

Following the incident at Tokhar Airwars tracked a brief drop in airstrikes around Manbij. However from July 22nd the Coalition campaign picked up pace once again.

The Pentagon also investigated an alleged incident on July 23rd at al Nawaja in which between 10 and 22 civilians were reported killed. Soon after it denied responsibility, concluding that “the JCTF did not conduct any strikes in that geographic location.” 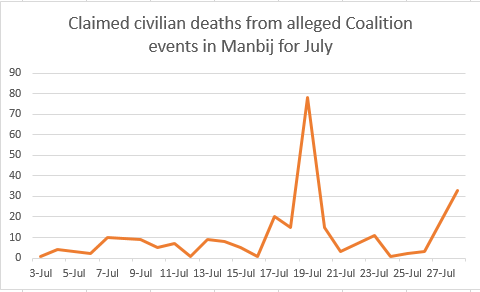 Almost daily: As this Airwars chart demonstrates, while alleged civilian fatalities around Manbij peaked at Tokhar on July 19th, claims occured throughout the month

Another major incident of concern took place on July 28th when at least 28 civilians were killed in a likely Coalition airstrike on the village of al Ghandourra. According to the Syria Newsdesk, the noon strikes hit the main market and the elementary school in the town, which was occupied by so-called ISIL.

The Syrian Observatory for Human Rights – which put the civilian death toll at 28 – added that it had “received information that 13 other people were killed in the same bombing, but they were not identified yet, and it is unknown whether they were civilian citizens or members of the Islamic State.”

Later that same day the Pentagon confirmed it was opening an investigation into the al Ghandourra incident – the first such immediate action in two years of war. A senior US military official told Airwars that the Coalition’s internal monitoring had already raised concerns – and that the decision to proceed almost immediately to an investigation represented a more pro-active approach to civilian casualty allegations.

There was a marked decrease in incidents of concern in Iraq for July. Seven events were reported, a 114% drop from the 15 cases we tracked in June.

Of these, Airwars presently assesses just one case as ‘fairly‘ reported:

According to a number of reports, on July 31st alleged night time or dawn Coalition strikes on homes in the vicinity of the Technical Institute and Faculty of Islamic Sciences at the University of Mosul resulted in “nearly 20” civilian fatalities. NRN reported that there were many casualties as a result of “brutal” strikes when nearby bystanders and cars were struck by fragments of destroyed buildings.

On July 18th, CENTCOM conceded 14 additional civilian deaths in Iraq and Syria, relating to six events between July 2015 and late April 2016. These new admissions bring the official confirmed tally for civilian dead to 55.

In addition to these confirmed fatalities, Airwars estimates that at least 1,507 to 2,301 civilians are likely to have been killed in Coalition strikes in Iraq and Syria since August 2014. This suggests the Coalition is under-reporting civilian deaths by 95 per cent or more.

Longer-term hope for civilians caught up in US wars came on July 1st, when President Obama issued an executive order (alongside an assessment of those killed in covert US drone strikes) on steps to be taken to protect civilians in conflicts.

Allegations of civilian casualty events involving Russia in Syria decreased by 11% in July. However, they remain at alarming levels.

In July we tracked 120 events reportedly involving Russian aircraft, against 135 tracked in June.

Due to the volume of alleged Russian incidents, Airwars is still in the process of assessing events from January to the end of July.

Raw estimates claim that between 564 and 633 civilians died in these July alleged events alone – though it will be some time before Airwars is better able to assess these allegations. 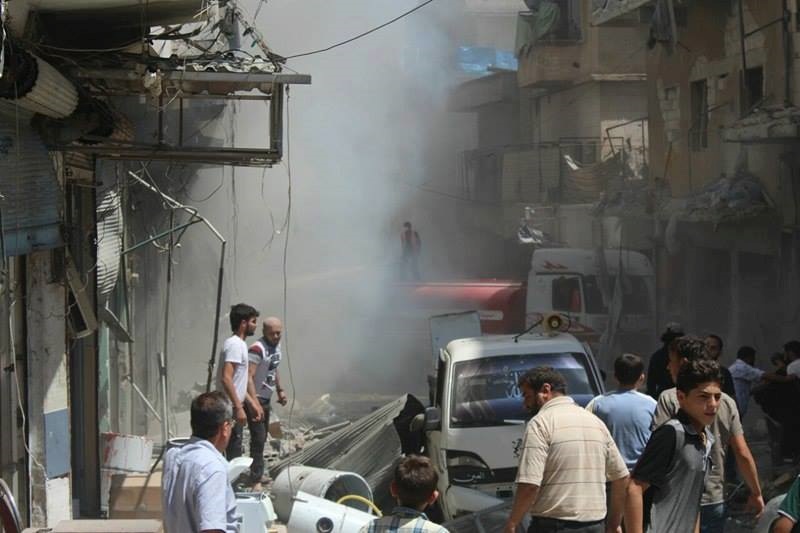 Scene of devastation at Ariha, Syria July 13th 2016 after an alleged Russian strike killed at least 12 civilians (Photo via LCCSY)

▲ The US Navy issues a rare photo of hardware-packed deck of amphibious assault ship USS Boxer, supporting war against Daesh (via US Navy)