International airstrikes and civilian casualties in Iraq and Syria: December 2015 to May 2016

Airwars monthly reports on international airstrikes and alleged civilian casualties across both Iraq and Syria will resume for June . Here we present our summary findings for December 2015 to May 2016.

The 13 allies had between them cumulatively dropped 46,615 bombs and missiles against Daesh to the end of May 2016. Weapon releases were down 5% between December and May compared with the previous six months.

In other key developments:

Airstrikes by the US in both Iraq and Syria continued significantly to outweigh those conducted by Coalition allies. As of May 30th, CENTCOM had reported a total of 5,859 US strikes in Iraq since August 2014 (68 per cent of all Coalition strikes there.) The UK was the next most active partner in Iraq, followed by France and the Netherlands.

There was also a marginal 1% drop in Coalition airstrikes in Iraq from December 2015 to May 2016 (3,010) compared with the previous six month period. 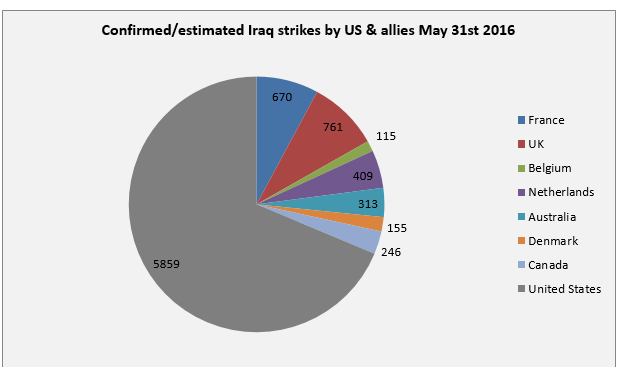 In Syria there were 1,056 Coalition airstrikes conducted from December 2015 to May 2016 (a 16% drop on the previous six months.) According to official data, only 79 of these strikes (7.5%) were by the US’s declared allies: France, the UK, Canada, Australia, Jordan, Saudi Arabia, Turkey and the United Arab Emirates.

Across the six months, an overall total of 1,110 to 1,558 civilian non-combatant fatalities were alleged from 145 separate claimed Coalition incidents in both Iraq and Syria, according to Airwars tracking.

The Coalition has so far confirmed only six civilian casualty events and one friendly fire incident for December to May, all from US military actions. These reportedly killed 10 civilians and 9 or more Iraq Army troops.

In a previously unknown casualty event, one civilian was confirmed killed during a US airstrike against a high value target in Raqqa, Syria on December 10th 2015.

A family of five was killed in a US airstrike on the Albothiab Island area of Ramadi, Iraq on December 12th.

At least nine Iraq Army soldiers including an officer were killed – and 32 or more injured – when Coalition aircraft providing close air support (CAS) accidentally struck a forward command post of Brigade Headquarters 55, in the Nuaimiya area south of Fallujah, Iraq on December 18th.

One civilian was killed during a US airstrike at Tishreen near Manbij, Syria on December 24th.

At least one civilian, a woman, was killed in a confrmed Coaltion airstrike on an ISIL-controlled bank in central Mosul, Iraq on January 11th. The attack was aimed at destroying millions of dollars of terror cash. CNN later reported the US had been prepared to accept up to 50 civilian casualties in the attack. 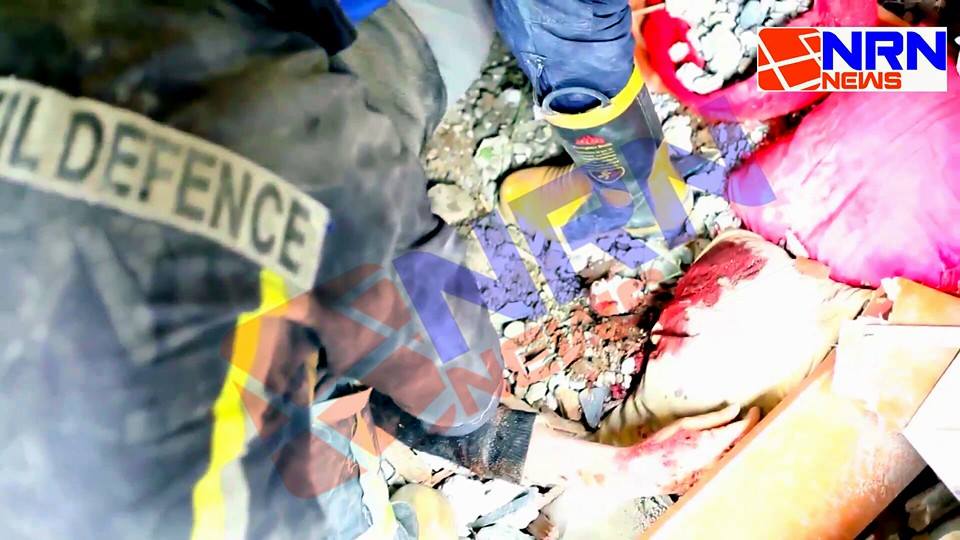 Civilian victim of a Coalition strike on January 11 2016, which targeted millions of dollars in a Daesh-controlled bank (via NRN News)

In a previously unknown casualty event, CENTCOM confirmed on April 22nd 2016 that one civilian was killed during a US airstrike at Al Ghazili near Ayn Isa, Syria on February 2nd.

And three weeks after an incident on April 5th, the US revealed that a strike on an ‘ISIL finance emir’ had  killed at least one civilian, a woman in Mosul, Iraq.

Overall CENTCOM has informed Airwars that, to May 20th 2016, the Coalition had provisionally investigated 182 alleged casualty incidents in total, of which it deemed 30 cases to be credible. Five confirmed cases have yet to be publicly reported – with an average delay of six months between a civilian death occuring and public confirmation by the Coalition.

Some 41 civilian deaths in total have now been admitted by the Coalition  – all the result of US actions. Despite more than 3,000 airstrikes by the US’s twelve allies in Iraq and Syria, no other Coalition partner has so far admitted causing any civilian casualties.

Along with the five civilian fatality events admitted by the US, Airwars has recorded 71 further ‘Fair’ incidents for December to May – 39 in Iraq and 32 in Syria. We presently estimate an additional 487 to 785 civilians died in these likely Coalition actions.

An event is graded as fair where two or more credible sources have reported an incident, and where Coalition strikes are confirmed in the vicinity on that date.

If correct, Airwars data suggests the Coalition may be underreporting civilian deaths by more than 95 per cent. 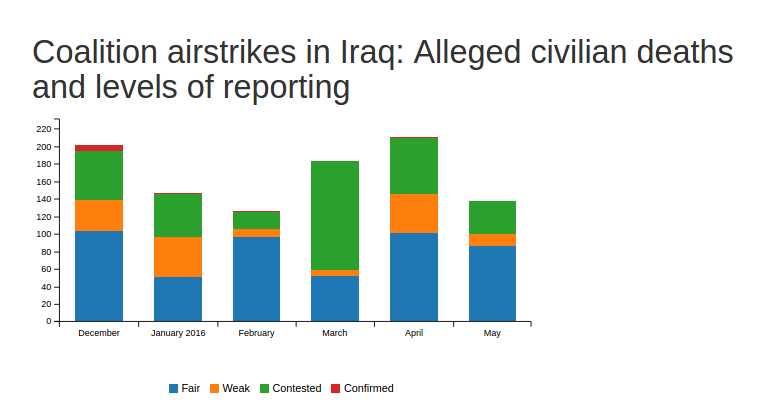 It is our provisional view at Airwars that between 290 and 511 civilians died in 39 events in Iraq, in addition to the seven recent deaths there admitted by the US.

On January 18th, 11 civilians were reported killed and 6 others wounded after Coalition aircraft allegedly targeted cars in the Exhibitions area east of Mosul. The National Iraqi News Agency reported residents of the city’s exhibition area saying that casualties occurred when aircraft fired on vehicles, while Al Araby said it was unclear whether whether the bombing has inflicted casualties on Daesh.

On February 25th, at least 13 civilians from ‘ISIS families’ – including women and children – were alleged killed when their bus was reportedly bombed between Qayarrah and Shura south of Mosul as it was trying to cross the Iraqi-syrian border, according to local sources. Reports said the terrorist group had been evacuating family members from Mosul to Syria in anticipation of a government assault.

The greatest number of claimed civilian deaths for any one incident so far in the 22-month air war was reported in Mosul on March 19th. According to multiple reports at least 25 non-combatants died along with 40 or more Daesh fighters, in a major daytime Coalition air raid on Mosul University. A single source report claimed as many as 90 students were additionally killed in the attack, with 155 people seriously injured. CENTCOM later announced it was investigating the allegations. 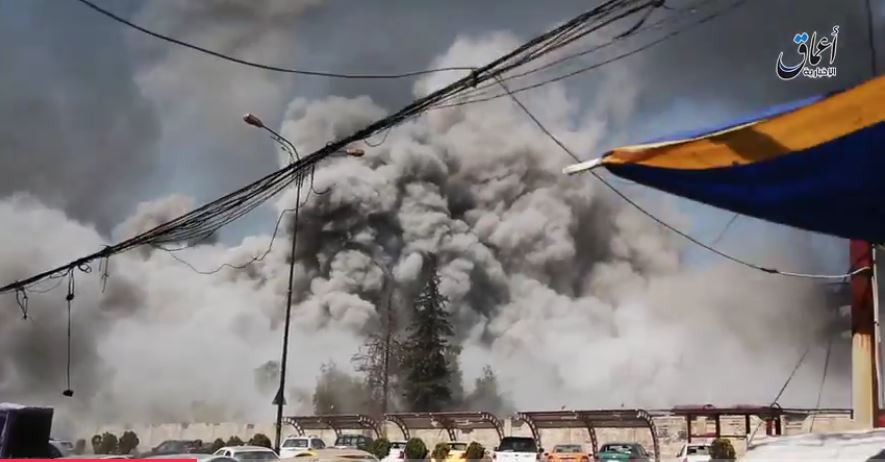 Rise of incidents in Syria

From December 1st 2015 to May 31st 2016, there were 32 reported incidents of concern in Syria which we graded as ‘Fair.’ It is our provisional view at Airwars that between 197 and 274 civilians died in these events – a 38 per cent rise in likely civilian deaths above the previous six months.

These increased casualty figures may reflect less restrictive rules of engagement introduced by the Coalition – though officials have insisted these have not led to more civilian deaths. 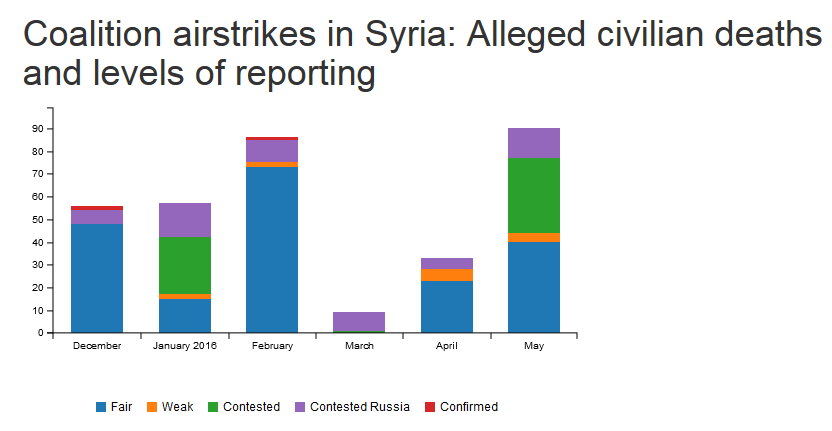 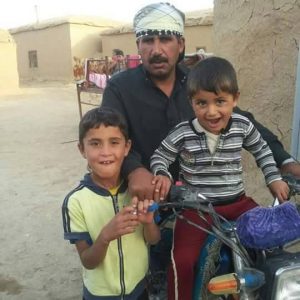 On December 7th 2015, in one of the worst mass casualty events credibly attributed to the Coalition as many as 47 civilians were reported killed and 17 injured in an alleged US Apache helicopter and fast jet attack on the village of al Khan near al Hawl. Locals were involved in an altercation with Islamic State militants according to the McClatchy news agency, with Coalition aircraft attacking a convoy of reinforcements as it entered the village.According to the Global Post, the airstrikes took place in the early hours of December 7th. CENTCOM later announced it was assessing the claims, though has yet to declare its findings. .

On January 7th-8th, eight children and three women were widely reported killed in what most sources claimed to be a Coalition airstrike on Khuzaymah, Al Raqqah governorate.  While Raqqah is Being Slaughtered and Radio Alkul did not attribute the attack, the Syrian Observatory blamed the Coalition.

Nine of the 13 reported incidents in Syria for February were clustered around the city of al Shadadi, recently captured by Kurdish forces with direct air support from the Coalition. A CENTCOM spokesman told Airwars that only two of these reported incidents were under investigation.

Proxy ground forces advanced on so-called Islamic State on a number of fronts in May, heavily supported by Coalition air power. The month also saw the highest number of alleged civilian deaths to date from Coalition actions. Forty out of 90 alleged fatalities are presently assessed as likely by Airwars.

On May 20th, up to ten civilians were reported killed in an alleged Coalition evening strike at Al Arshaf village on the outskirts of Ekhitrin town, in the northern Aleppo countryside.

And on 31st May – 1 June,  as many as 15 civilians including at least three children reportedly died in Coalition airstrikes in support of a major Kurdish ground offensive against Daesh near Manbij. Three sources alleged that the Coalition was responsible. When approached by the Independent, a Coalition spokesperson said they were ‘unaware’ of any civilian casualty allegations, despite widespread media coverage.

Russia’s September 2015 intervention in Syria radically changed the situation for both civilians and combatants on the ground.

Russia’s initial focus was not as it claimed so-called Islamic State, but rebel groups in northern and western Syria. Backed by heavy Russian airpower, Assad regime forces were able to break out of their beseiged strongholds, and launch major offensives against rebel groups. Airwars mapping of likely civilian deaths from Russian airstrikes to December 31st shows most were far from ISIL’s strongholds. 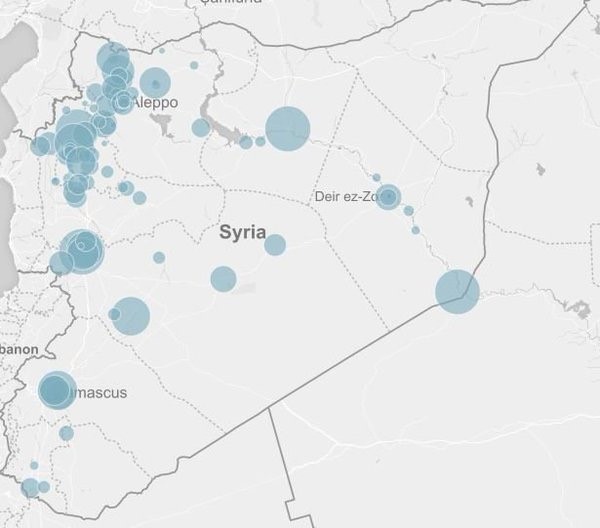 Russian airstrikes and civilian casualty allegations peaked in February 2016, with 166 claimed civilian casualty events that month attributed to Moscow. However, the announcement of a key Syrian ceasefire at the end of that month saw a major reduction in Russian activity. In addition, on March 14th Russia announced it would partially withdraw its forces from Syria.

A total of 2,792 to 3,451 non-combatants were allegedly killed by Russia over six months in these 571 claimed events. This is likely to be a significant over-estimate. As Airwars reported in A Reckless Disregard for Human Lives, in the first three months of Russian airstrikes in Syria, only 60 per cent of alleged civilian fatalities were likely to have resulted from Moscow’s actions. Russia still continues to insist it has killed no civilians in its air campaign in Syria.

In total, 782 alleged civilian casualty events had been attributed to Russia from September 30th 2015 to May 31st 2016. Per month, this is approximately five times the number of alleged Coalition events claimed across Syria and Iraq. With so many Russia allegations, Airwars has so far only been able to publish strike and assessment data to December 31st 2015. Our assessment of January 2016 will publish shortly.

Among the worst incidents so far assessed, between 61 and 90 civilians were killed in airstrikes on Khusham on January 23rd – with at least 40 others injured. Almost all local sources blamed Russia for the attack on civilian neighbourhoods.

Tracking of such allegations in Syria can provide a helpful indicator of casualty trends and broader military activity. Civilian casualty allegations fell by more than 70 per cent in March for example, following the Syrian ceasefire and Russia’s partial drawdown.By April, Airwars was recording similar numbers of allegations against Russia and the Coalition (in Iraq and Syria.) However that trend reversed in late May, with reported Russian strikes and civilian casualty claims once more escalating. 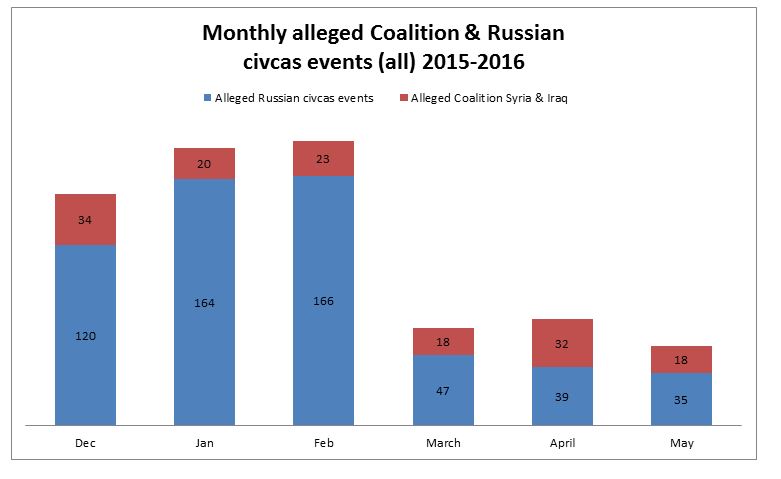 ▲ A picture shows the aid team trying to remove the casualties from the incident location where seven civilians were reported killed and 23 injured in two alleged Coalition raids on May 24th,2016.