August saw the second anniversary of the war against so-called Islamic State, with the terrorist group losing significant ground on multiple fronts. The Coalition campaign to liberate Manbij in Aleppo concluded with Daesh being driven out of the northern Syrian town. This led to a steep drop in Coalition airstrikes and reported civilian casualty events, with less than half the number of allegations seen in July.

The month also saw Daesh in decline in Iraq, with Iraqi forces making significant advances, including seizing the key town of Qayyarah in preparation for the imminent battle of Mosul.

However, Russian airstrikes continued to bombard Syria, with hundreds of non-combatants reported killed. In one week alone we saw over 40 claimed Russian civilian casualty incidents.

Overall, a total of 9,695 airstrikes had been cumulatively carried out in Iraq and 5,024 in Syria to the end of August 2016. For the second consecutive month, Coalition airstrikes in Syria (303 strikes) outweighed those in Iraq (259 strikes.)The six active allies between them dropped 2,241 bombs and missiles on Daesh in August, an 8% per cent decrease on the previous month and significantly down on the June peak of 3,160 munitions released.The US again remained the dominant Coalition partner in both Iraq and Syria. However, the number of strikes it carried out in August decreased by 22% in Iraq (156 strikes) and by 20% in Syria (263 strikes) on July.

Actions by the UK continued to fall in Iraq, with the RAF carrying out 31 strikes (a decrease of 47% on July). However UK strikes in Syria rose from five to nine on July. All but two of these UK actions were near Manbij, with particularly intense activity at the start of the month: on August 1st, eight Paveways IVs destroyed a network of fortified positions. The next day, another eight Paveways struck buildings reportedly acting as a major Daesh defensive position.

Activities by France – which remains the third most active Coalition partner – decreased slightly in Iraq, with 29 strikes declared in August (a fall of 6%). In Syria France carried out just one strike (compared with two in July): on August 21st, ten SCALP cruise missiles were used to destroy a ‘Daesh weapons centre‘ near Raqqa.

Australia returned to the attack in Syria for the first time since February, reporting seven bombs dropped at unspecified locations during August. Defence officials refused to say where or when the actions took place.

Denmark stepped up its own  air campaign in August, reporting 104 weapon releases (a 116% increase on July). In the week to August 17th alone, Denmark dropped 43 bombs in Iraq.

On August 5th, Denmark also made public its first strike in Syria (at Raqqa), with further actions publicly announced in Dayr az Dawr and Hasakah governorates . However the Danish MoD refused to say how many strikes were carried out at which locations and on which dates when contacted by Airwars – making it impossible publicly to assess possible civilian casualty events. 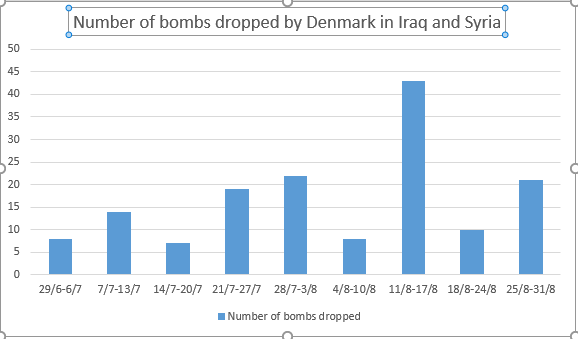 On August 6th after a 10-week offensive, the US-backed SDF took control of 90% of Manbij from Daesh. With the terrorist group defeated, residents returned to find that many homes had been booby-trapped with mines. By August 13th, the SDF had seized full control of the town. However, Daesh was able to negotiate a retreat by using hundreds of civilians as human shields.

The US reportedly dropped 8,400 precision-guided munitions during the Manbij/ Mar’a Line campaign, announcing that it saw this as a model for a future assault on Raqqa. However, as Airwars previously reported, the campaign came at significant cost, with hundreds of non-combatants killed in the vicinity.The end of the siege saw a 51% reduction in strikes in and near Manbij in August, as the Coalition began focusing its resources on other key Syrian locations.

Meanwhile in Iraq, in readiness for the eventual battle for Mosul the Kurdish peshmerga made significant advances – recapturing 11 villages from IS.

And a month after retaking Qayyarah airfield, on August 25th Iraqi forces seized control of Qayyarah itself, situated 60 km south of Mosul.

However, as the noose tightened around Mosul, tens of thousands of civilians were displaced from surrounding towns and villages, with the United Nations continuing to express concerns for their wellbeing. 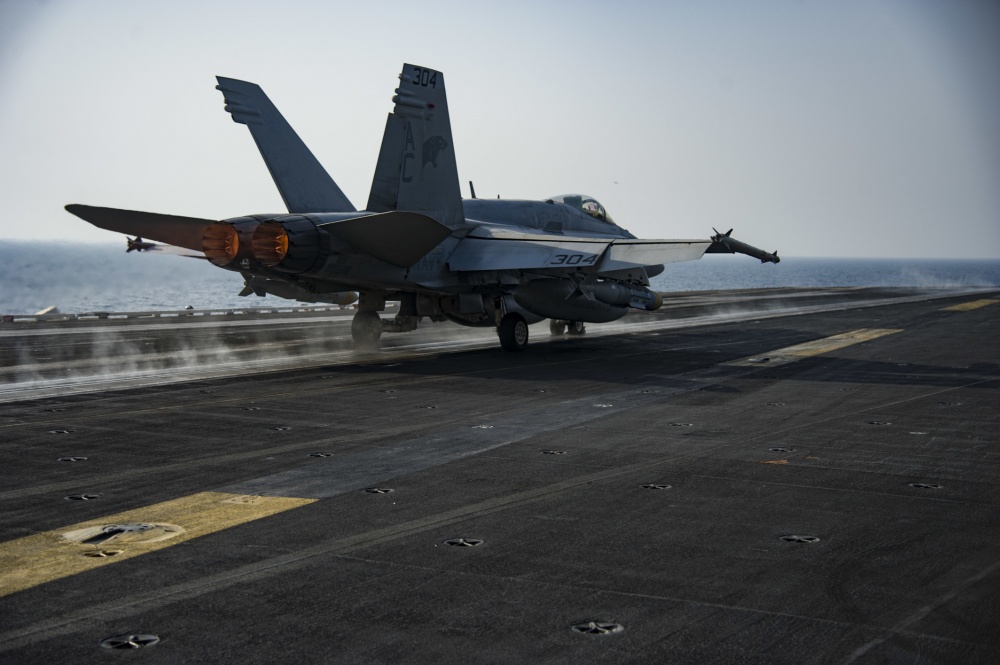 August saw a major drop in reported civilian casualty events, with less than half the number of allegations seen in July – the highest tally of the war so far.  Overall, there were 22 alleged civilian casualty incidents. A total of 118-151 non-combatant deaths were claimed in these events.Airwars presently assesses 8 of these 22 events as being fairly reported – that is, with two or more credible sources, and Coalition strikes confirmed in the near vicinity. Between 21 and 46 civilians are presently assessed as likely having been killed in these incidents, compared with between 208 and 387 such deaths in July. 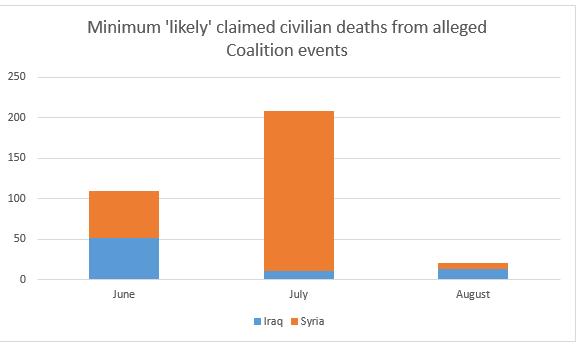 As Airwars’ chart shows, there was a huge drop in likely civilian deaths in August

In Syria, 14 alleged Coalition civilian casualty incidents were reported overall in August – a decrease of 65% from the record 40 claimed events we tracked in July. Between 8 and 13 alleged fatalities from Coalition actions in Syria in August are presently assessed by Airwars as being likely  – compared with 198 to 368 likely deaths in July.

There were however still significant incidents of concern attributed to the Coalition during the month:

On August 7th, at al-Tank oil field, civilians were reportedly killed and wounded when 83 oil tankers were burnt in a Coalition raid. According to the Syrian Observatory for Human Rights, “Warplanes believed to be from the International Coalition targeted areas in the al-Tank oil field in the desert of Deir Ezzor, which resulted in the death and injury of several people and also killed several members  of Islamic State, in addition to the outbreak of fires in fuel tankers in the area.”

Al Hal put the death toll at seven civilian workers. The Coalition later confirmed destroying 83 oil tankers that day, with the UK separately reporting that two of its Tornados had fired four Paveway IVs and four Brimstone missiles, which “accounted for a number of vehicles.“

There was a small increase in incidents of concern in Iraq for August. Eight events were reported – up from seven in July.

Of these, Airwars presently assesses three cases as ‘fairly‘ reported and estimates that between 13 and 33 civilians were likely killed in these events.

On August 15th in Mosul, between 7 and 13 civilians reportedly died – with 35 more injured – after the Tamatim food distribution building was hit in the city.  NRN News, which published graphic photos, reported that 13 civilians died. The Iraqi Spring Media Centre placed the death toll lower at seven.  The Coalition reported strikes on the day near Mosul.

And on August 19th at Jissag near Mosul, as many as 19 civilians reportedly died in an alleged Coalition airstrike.  Yaqein reported the deaths of a woman and her four children. The Iraqi Spring Media Centre later revised upwards its tally to 15 civilians killed. NRN News placed the death toll at 13.  The Coalition later said it had struck “an ISIL beddown location” that day. So-called Islamic State issued a video following the event, which showed widespread destruction of a civilian neighbourhood as well as graphic footage of at least three dead children. One apparent eyewitness speaks to camera: “How can God allow America to kill 19 family members at their home, mostly kids? Are they fighters? May God take revenge on America.” 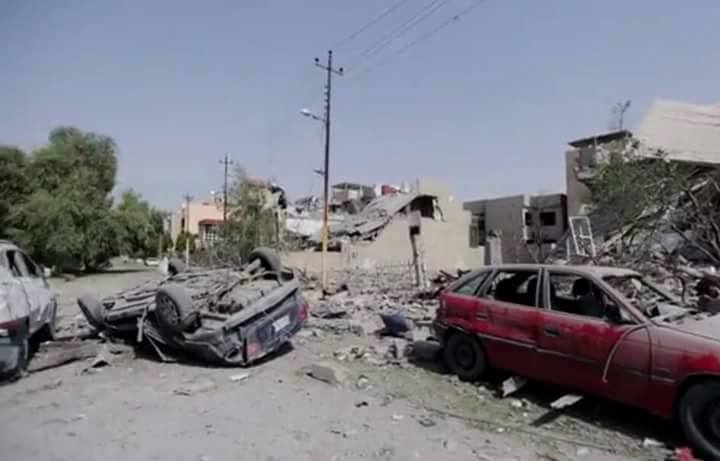 A reported image of destruction at Jissag, following an alleged Coalition airstrike on August 19th which is said to have killed five or more civilians (News of Iraq)

The month also saw three alleged events which were discounted by Airwars. In total, these accounted for a minimum of 66 deaths – the greatest number of deaths attributed to such discounted incidents in two years of Airwars tracking.

On August 1st, local sources said nine civilians including women and children died in alleged Coalition strikes on homes in neighborhoods of Qa’im city. And the following day, August 2nd, multiple sources reported 45 died in an alleged Coalition strike on the al Sanjak and Karabila areas of Al Qaim. The Coalition insisted to Airwars that it had carried out no strikes in or near Al Qaim from August 1st to 3rd.

And on August 23rd, up to 10 civilians were reported killed when – according to local sources – the Coalition struck the Hadbah and Zuhoor neighborhoods in Mosul. The Coalition did not publicly report any strikes in the vicinity for Aug 22nd – 24th, and a spokesperson later confirmed the Airwars that this was the case.

Raw estimates claim that between 571 and 716 civilians died in these events. Due to our limited resources and the volume of alleged Russian incidents, Airwars is still in the process of assessing more than 1,000 alleged events from January to the end of August 2016.

On August 15th, it was reported that Russia was basing long-range Tu-22 bombers at Iran’s Hamadan airbase for airstrikes against ISIL and rebel groups in Syria. Yet in a major setback, just a week later amid accusations that Russia was “showing off”, Tehran ended Moscow’s use of the airbase – which it now said had been “temporary.“

A heavy Russian reliance on unguided ‘dumb’ munitions is a key factor in more than 3,000 likely civilian deaths from its strikes, in the view of Airwars.  A Russian MoD video showing Tu-22 heavy bombers attacking Raqqa on August 11th clearly demonstrates the relatively poor accuracy which reportedly killed 27 civilians that day.

Russia released footage on an August 11th raid on Raqqa, with the video indicating the relatively poor accuracy of such strikes

▲ A Royal Australian Air Force F/A-18A Hornet sits on the flight line of Australia's main air operating base in the Middle East Region.