Record and alarming numbers of civilian casualties were reported in November from both Russian and Coalition strikes – as major air campaigns in support of ground operations in Iraq and Syria continued.

The Coalition’s air campaign intensified in support of Iraqi ground forces seeking to recapture Mosul from so-called Islamic State (ISIL). This coincided with the beginning of a ground offensive in Syria by SDF proxies (supported by US-led airstrikes) to seize Raqqa – ISIL’s Syrian stronghold and capital of its self-proclaimed caliphate. Civilians were at significant risk from Coalition actions during November: we tracked the greatest number of claimed casualties so far in the war, with 73 events alleged for the month.

Meanwhile as the Assad regime began its final push to oust rebels from Aleppo, regime and Russian airstrikes maintained a ferocious momentum, leaving more than 1,000 non-combatants reported killed – the highest number of casualties attributed to Russia in any one month since it intervened in Syria.

Since the start of the Coalition campaign, 10,595 airstrikes had been carried out in Iraq and 5,997 in Syria through the end of November 2016 according to official data. During November, reported Coalition airstrikes in Syria (351) again outweighed those in Iraq (280).

According to official CENTCOM figures released to Airwars, in the period from October 31st – November 27th, the US alone carried out 313 strikes in Syria, an increase of 38% over the previous month. The remaining members of the Coalition conducted just 19 strikes in Syria, a marginal increase from the 17 declared in October.

In Iraq during the same four week period, there was a small increase of 5% in declared US strikes, with 194 reported – while strikes carried out by non-US allies remained fairly static at a reported 81.

RAF Tornado GR4s use a Brimstone missile to destroy one of the few remaining tanks operated by ISIL, ten miles west of Mosul on November 29th.

For October, France had reported a record 95 strikes in Iraq. This led Airwars to suggest Paris may be using a more generous definition of the term ‘strike’ than the Coalition itself does in reports. November saw a 49% decrease in declared French strikes in Iraq with 48 actions reported – nearer the average number of monthly strikes (53) over the last 11 months. Actions in Syria remained at similar levels to October, with nine strikes declared.

Despite the decrease in reported strikes, for the second straight month France appeared to surpass the UK’s position as the second-most active member of the Coalition. The UK reported 44 strikes in Iraq and four in Syria.

Ahead of its scheduled withdrawal of F-16s in Iraq and Syria in mid-December, Denmark significantly scaled back its actions, reporting 31 weapon releases during November (approximately 7 strikes). That was a decrease of 62% on the previous month and the lowest number of precision bombs dropped since July. 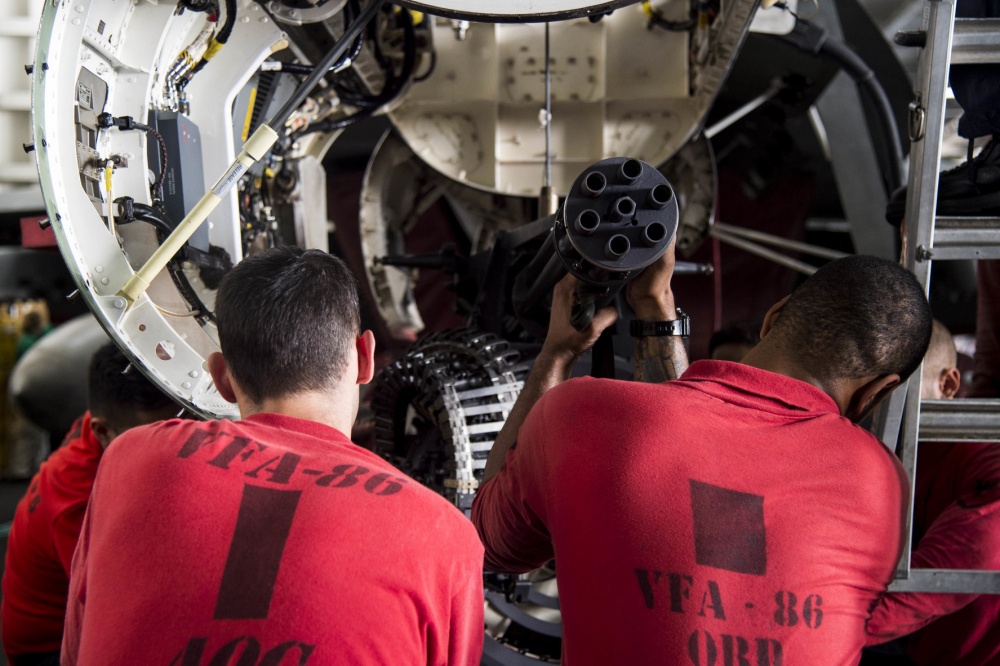 By the beginning of November, Iraqi forces – supported by Coalition and Iraq government airstrikes – had finally pushed past Mosul’s city limits and into Gogjali, an industrial area in the eastern suburbs.

Iraqi forces held on to the territory they’d won as they prepared to move further into the city, while ISIL leader, Abu Bakr al-Baghdadi, urged the terrorist group to fight to the death.

But as the advance continued, the risk to civilians mounted as thousands attempted to flee. By November 21st, the UN estimated that the number of non-combatants displaced by the fighting – which saw many caught in the crossfire of bloody street battles – had risen to just under 70,000.

The Coalition declared 154 strikes in the vicinity of the city during November – an increase of 19% over October and more than half of all declared strikes in Iraq for the month. Early in November it was reported that the Pentagon would exercise ‘tactical restraint’ in airstrikes, for fear of killing civilians. This may go some way to explain the less dramatic increase in strikes. However there were also significant reports of Apache helicopter strikes in support of ISF at Mosul – which are not included in daily Coalition tallies.

Airwars analysis shows that in the first full month of the Mosul campaign, a quarter of all targets reportedly destroyed by the Coalition were ISIL mortar positions (25%). The terror group had heavily targeted liberated areas of the city with their mortars – leading to significant civilian and military casualties.

On November 7th, the Coalition confirmed that it was backing the Kurdish-dominated Syrian Defence Force (SDF)  with airstrikes and ‘advise and assist’ support in a campaign to liberate Raqqa from ISIL.

However, the US’s announcement that Kurdish YPG forces would participate in the fight for the city risked inflaming a complex situation with Turkey, whose Operation Euphrates Shield – aimed at both ISIL and Kurdish forces – pushed deeper into northern Syria.

As the month continued, the Coalition campaign gathered momentum, with particularly intense activity in the week commencing November 21st. Overall, the Coalition declared 60 strikes near Raqqa – a 100% increase over October. Reported civilian deaths from Coalition actions in the area also significantly increased.

The escalation of the battle for Mosul – and the beginning of the Raqqa offensive – had a significant toll on civilians during November, which we saw the greatest number of alleged civilian casualty events from Coalition airstrikes yet reported in the 28-month war.

In Iraq and Syria there were 73 alleged casualty incidents during November – an increase of 62% over October. A total of 348 to 405 non-combatant deaths were claimed in these incidents.

Airwars currently assesses 33 of these events as fairly reported. This means an incident has two or more credible sources, with Coalition strikes confirmed in the near vicinity. Between 142 and 186 civilians are presently assessed as likely having been killed in these incidents, compared with a range of 122 and 148 such deaths in October.This represents a 16% rise in likely civilian deaths over October.

The month was also notable for a record number of poorly reported incidents – that is, events which had only a single source,often providing little detail. Overall, there were 20 such events, accounting for 86 claimed deaths. In Mosul in particular reports were often fragmentary.

As Iraqi Security Forces moved into the more densely populated areas of Mosul, we saw an increase in claimed civilian casualty incidents in the area.

Despite the Coalition reportedly exercising caution with strikes, there were 22 incidents of concern reported near Mosul – an increase of 38% on the previous month. As many as 165 non-combatants were claimed killed in these incidents – compared with a maximum 117 deaths in October.

However Airwars currently assesses only five of these 22 events  as likely – killing 48 to 52 civilians – a decrease from the ten likely events which killed up to 83 non-combatants in October.

This reduction in the likely death toll was due to the increased number of poorly reported events in Iraq, with 11 such incidents around Mosul counting for 60 claimed deaths. Additionally, six events – killing 53 civilians – were also contested, with reports variously blaming the Coalition, the Iraqi Air Forces and ISIL.

Major incidents of concern likely involving the Coalition included an event on November 7th, when 14 civilians died strikes in Mosul according to local sources. IBN News said civilians were “mistakenly” hit in a Coalition raid in southeast Mosul. It also cited medical source, who said the dead included women and children.

Coalition raids also likely killed more than 20 civilians on November 18th, according to reports. ISIL-controlled Al A’amaq said seven people died and 14 were injured in a Coalition bombing of the Al Tanak neighborhood of Mosul. Other outlets released similar figures, but Iraq News Center put the civilian toll at 30 killed and wounded.

Rafiden tweeted that 21 civilians were killed and wounded in an alleged Coalition strike west of Mosul on November 18th.
On November 26th, as many as 18 civilians died and 35 were injured in a Coalition strike, according to local sources. Multiple social media accounts put the death toll at 14, though Russian state media outlet Sputnik News cited reports that 18 people, including 14 women, were killed.

November saw the highest number of reported civilian deaths in Syria since the Manbij campaign in July. Overall, there were 44 claimed casualty incidents during the month, a 63% increase on October.

Of the 44 incidents, Airwars presently assesses 24 of these events as having been carried out by the Coalition. Between 67 and 106 civilians likely died in these incidents – a significant increase on the 50 to 65 likely deaths reported the previous month.

As in Iraq however, the month also saw a much higher number of poorly reported, single-sourced events in Syria than in October.

As the offensive to seize Raqqa from ISIL got underway, we saw a dramatic rise in reported deaths, with 47% of all claimed incidents for the month occurring in the governorate.

Airwars currently assesses  20 of these Raqqa incidents as having been carried out by the Coalition. Based on local reports they are assessed to have likely killing between 61 and 74 civilians, of which up to 13 were children and 7 women. Up to 111 additional civilians were reported injured in these events.

We tracked an immediate increase in deaths from the official start of the campaign: between November 6th and 13th alone, our researchers tracked reports of 11 events – and as the month continued, the death toll rose.

On November 19th,  between eight and 11 non-combatants died at Bia’as village in what both the Syrian Network and Syrian Observatory called a ‘massacre’. According to Shaam News Network, “clashes [between ISIL and SDF] have moved into the centre of Tal Al Samin where international coalition aircraft have launched dozens of air raids on positions controlled by IS.”

Just two days later on November 21st, a reported early morning Coalition airstrike on the village of al Salhiyeh killed at least nine civilians – most from the family of Mustapha al Farwa. ISIL’s media wing said the target of the raid was a cotton factory in the village, where three workers also died. Ara News cited a local activist as saying that “the raids came after false information came to the Coalition that the factory is used for the manufacture of weapons and belongs to Islamic State.” Syria News Desk said there were six raids in total – which also injured 13 civilians.

From November 21st to 27th, the air campaign maintained a fierce tempo, with the Coalition declaring 31 strikes near Raqqa (52% of all strikes in the governorate for the entire month). A minimum of 29 civilians were assessed as having likely died in this period alone.

A tweet reporting the death of Abdul Rahman Abdul Karim Zoughair, one of 10 civilians killed in an alleged Coalition strike on al Salhiyeh, Raqqa, November 21st 2016

At the start of November a ten-hour truce by Russia offered civilians and rebels the opportunity to leave eastern Aleppo – with the Assad regime threatening those who remained with “annihilation.” A ferocious ground assault by Syrian and Iranian troops and irregular forces then began – backed by a major ramp-up in Russian airpower and Assad regime strikes. This marked the final push to oust rebels from the devastated city.

During the month, Airwars tracked the highest number of claimed civilian fatalities from Russian airstrikes to date, with 215 separate events allegedly involving Russian aircraft. Airwars raw estimates indicate that up to 1,005 civilians died in these incidents, though due to the volume of alleged Russian incidents, it will be some time before Aiwars can present a full analysis of the month.

October had ended with a brief lull in strikes on Aleppo, as the Assad regime and Russia turned towards Idlib. However, resources were piled back into Aleppo at the start of November.  Overall, some 67% of all alleged Russian casualty events for the month were in Aleppo governorate.

The aftermath of an alleged Russian airstrike on Balto, Aleppo, November 16th 2016 (via Step News)