September continued to see Daesh on the defensive, losing significant ground in both Iraq and Syria. In Iraq, Coalition forces geared up for the Battle of Mosul with a steep increase in airstrikes in and near the city. Reported civilian casualties from Coalition actions in both Iraq and Syria remained at levels similar to August.

In Syria, a fragile US-Russia brokered ceasefire broke down amid repeated violations. While the agreement initially allowed some aid to reach civilians, it ultimately did little  to decrease the violence. Hopes of a longer-lasting cessation of hostilities ended as the Assad regime began a major offensive to retake Aleppo towards the end of the month.

Six members of the Coalition dropped a total of 2,417 bombs and missiles on Daesh targets in September. That represented an 8% per cent increase over August, but is still down significantly from the June peak, when 3,160 munitions were released according to Coalition figures.During September, the US again remained the dominant Coalition partner in both Iraq and Syria. The number of strikes it carried out in Iraq increased by 8% (168 strikes) and by 9% in Syria (286 strikes) compared with August.

While the UK carried out just three strikes in Syria during September, the British military played a more prominent role in Iraq where the RAF carried out 52 attacks on ISIL targets – a 68% increase from August.

September saw a particular rise in Britain’s use of its Reaper RPAs, with 46% of UK strikes carried out by armed drones.

As this Airwars chart shows, Reaper drones are again carrying out a greater proportion of UK strikes.

Attacks by France – which remains the third most active Coalition member – held at similar levels to August, with 28 strikes declared in Iraq (down by one) and were focused around Mosul. On September 18th, France again used its SCALP cruise missiles, this time reportedly targeting a Daesh training and production center for explosive devices in the Mosul area. No French strikes were reported in Syria during September.

After stepping up its own air campaign in August, there was a significant drop in actions by Denmark in September, which reported 50 weapons releases. Actions were also publicly announced in Raqqah, Dayr az Zawr and Aleppo in Syria – though Denmark refused to disclose how many strikes were carried out in each location, and on which dates. 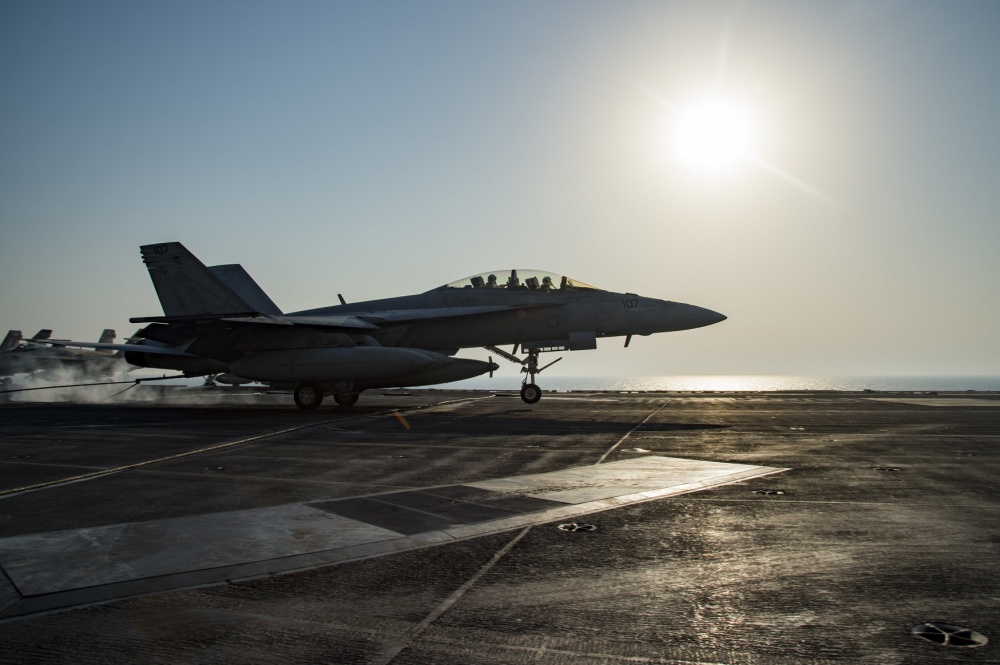 In Iraq, military sources said that the long-awaited operation to retake Mosul would begin in October. Strikes in the vicinity of the ISIL-held city increased by 38% from August to 86 the following month.

On September 28th it was also announced that 600 additional US troops would be deployed to aid Iraqi Security Forces in Mosul, while the Coalition said its strikes had targeted 18 Daesh leaders over the course of the month

However as Daesh braced itself for the advance of the ISF, fears of mass civilian casualties grew. Reports circulated that the terrorist organisation was increasingly hiding its operations in hospitals, mosques and schools – in addition to constructing an elaborate network of underground tunnels armed with IEDs. 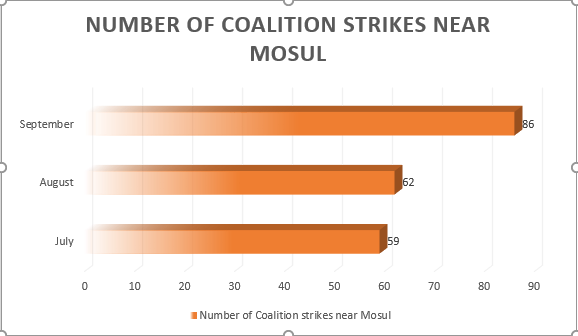 As this Airwars chart shows, September saw a steep increase in Coalition strikes near Mosul.

Overall, there were 25 alleged civilian casualty incidents reported in September  – three more than the previous month. A total of 100 to 147 non-combatant deaths were claimed in these events. Airwars presently assesses 12 of these 25 events as being fairly reported – that is, with two or more credible sources, and Coalition strikes confirmed in the near vicinity. Between 36 and 48 civilians are presently assessed as likely having been killed in these incidents.

Between 13 and 16 alleged fatalities from Coalition actions in Syria in September are presently assessed by Airwars as being likely from these events – compared with 8 to 13 likely deaths in August.

The US itself announced that it may have killed or injured civilians in three separate events during September, reporting that it had begun investigations. 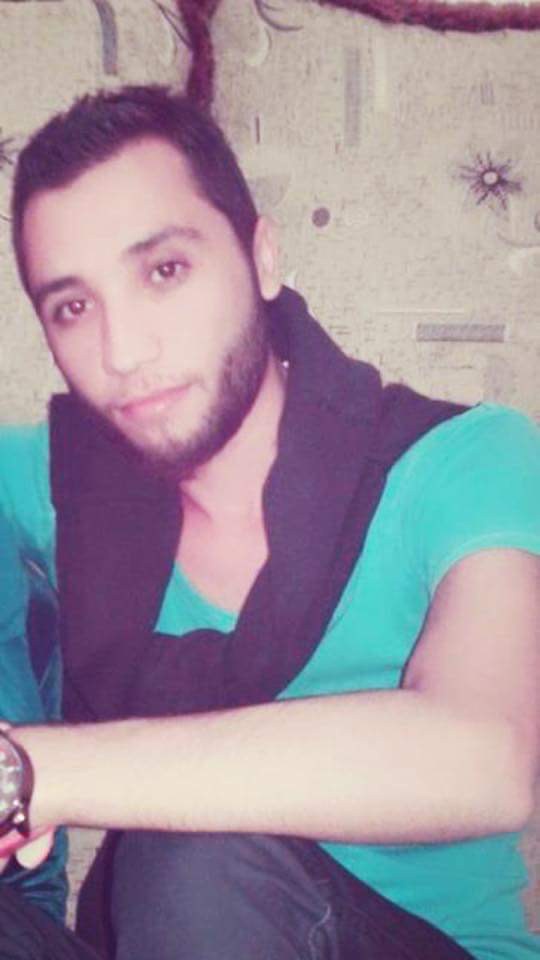 The fourth confirmed incident took place at Al Tharda mountain in Deir Ezzor governorate on September 17th , when between 13 and 83 Syrian troops besieged by ISIL were killed – and 120 more reported injured – after a Coalition raid targeted their locations. The United States, Australia, Denmark and the UK all said their aircraft had participated in what appears to have been a massive raid.

The botched attack briefly allowed ISIL to capture the area before it was driven back by Russian airstrikes. The event dealt a major blow to a fragile Syrian ceasefire, with a furious Russia calling an emergency meeting of the UN Security Council – dismissed by the US at the time as a ‘cynical stunt’. Moscow also accused the US of “colluding with ISIL.”

There was a small in decrease in incidents of civilian casualty concern in Iraq for September. Seven events were reported – down from 8 in August.

Of these, Airwars presently assesses five cases as ‘fairly‘ reported and estimates that between 23 and 32 civilians were likely killed in these events. Most were centered around Mosul.

On September 8th, between two and seven civilians including women and children reportedly died – and five were injured – in an alleged Coalition airstrike on the Tel Al Shaeer and Aski Mosul areas in Tal Afar, west of Mosul. Yaqein reported that Coalition shelling “lasted more than an hour“. Aleyatiraq put the death toll at seven.

The Coalition officially reported carrying out a strike on a VBIED factory near Tallafar on the day, while the UK said that on September 8th, “intelligence had identified a bomb-making factory and associated terrorist training facility in neighbouring compounds to the west of Tall Afar. A pair of Tornados struck both targets accurately with Paveway IVs, then proceeded to provide close air support to local Iraqi forces, in the course of which they conducted a further successful Paveway attack against two rocket launchers.”

It is not known whether the Coalition or the UK have begun investigations into the incident.

On September 20th, up to seven civilians and 30 Daesh fighters were reported killed and 47 people injured after the Coalition allegedly carried out dawn airstrikes on Mosul.  NRN News said that among the locations hit was a Daesh headquarters, but that there were also strikes “in Al Muthanna, in the Baath and Arab neighborhoods, and near the city’s Great Mosque.” The Coalition reported carrying out five strikes near Mosul between September 20th-22nd.

The precarious Syrian ceasefire did little to reduce alleged civilian fatalities attributed to Russia during September.

Just two days into a claimed truce on Sept 15th, at least 27 civilians died and more than 70 were injured following airstrikes on Al Mayadeen. Almost all sources including Daesh blamed Moscow.

In total, Russian civilian casualty events in Syria were up by 35% in September (and were almost seven times higher than claimed Coalition events for the month across Iraq and Syria). Raw estimates claim that between 801 and 960 civilians died in these events, making this one of the worst months for civilian casualty allegations involving Russia since January 2016. 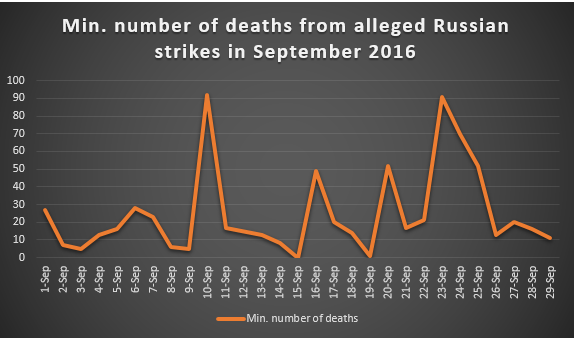 As this Airwars chart shows, there was initially a drop in civilian casualties allegedly involving Russia during a week-long ceasefire. However, claimed deaths once again rose by September 20th.