Belgium has been implicated in two events in Iraq which the US-led Coalition says killed two civilians and wounded four others, national officials have told Airwars. The revelation comes despite denials by the country’s Defence Minister that ‘Operation Desert Falcon’ against so-called Islamic State has harmed any civilians – even after hundreds of airstrikes.

In May of this year, a senior Belgian official told Airwars that Brussels was likely involved in a civilian casualty incident resulting from a strike in Al Qaim, Iraq, on February 27th 2017. Airwars was also told about another incident, in Mosul on 21st March, which it understands was still under investigation by the Coalition at the time.

While the Coalition as a policy does not identify the involvement of individual countries in allegations, it did confirm the investigative status of these particular incidents. Both cases have now been classed as “credible” – meaning that the alliance has determined that civilian casualties likely resulted from the airstrikes – according to an email from Coalition officials to Airwars.

The Coalition’s own monthly civilian casualty reports show that each of the two cases were initially brought to their attention through a “self-report” by an unnamed partner nation.

In an interview with Airwars, Colonel J. Poesen, head of operations at the Belgian Air Force said that Brussels disagreed with the Coalition’s assessment of the February 27th incident at al Qaim, which was published in a monthly civilian casualty report published in late April. That report noted that one civilian was killed and another injured when a vehicle was driven into the target zone. “We do not agree with that analysis and we are also convinced that it is not right,” Poesen told Airwars on July 6th. He also suggested that Coalition officials had been “quite quick” in their assessment of the al Qaim incident.

The other Belgian incident divulged by the senior official to Airwars took place in Mosul on March 21st 2017. While the Coalition was still assessing the case in May, it listed it as ‘credible’ in a civilian casualty report released on June 2nd. This noted that a strike on ISIS fighters had also hit four civilians who entered the target area after the munition was released. One of them died and three were injured, the alliance determined.

Though there were multiple alleged civilian casualty incidents reported in Mosul on March 21st, as part of a routine enquiry a Coalition official provided Airwars with the exact coordinates of the raid in question – placing it in the city’s July 17th neighborhood. Airwars had previously monitored a public report of civilian casualties in the near vicinity for that date, though details were sparse prior to the Coalition’s admission.

It is unclear whether Belgium challenges the Coalition’s assessment for this Mosul incident too. On July 6th, Colonel Poesen informed Airwars that the case was no longer under investigation by Belgium. 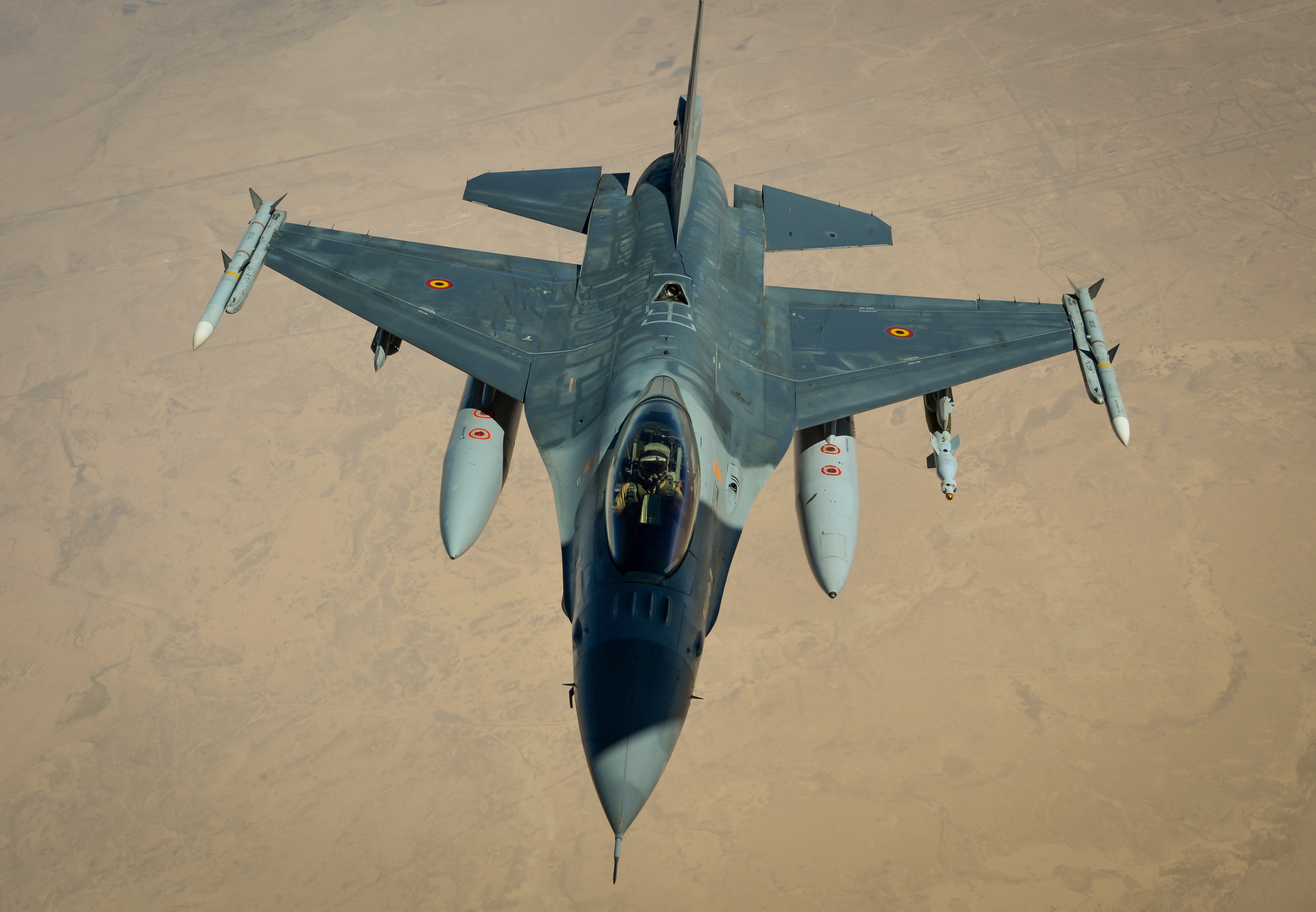 Belgium’s refusal to accept responsibility for any civilian deaths it has been implicated in may relate to its apparent insistence that only cases which might violate international law should be investigated. According to Colonel Poesen, all incidents reported to the national Public Prosecutor have so far been been declared not to have violated international law and so had been filed without further follow-up.

Poesen went on to say that “even if there were to be casualties, it would be completely in line with the rules of engagement and the pilot would not have been guilty.” In a press statement on July 6th Colonel Poulsen also repeated Belgium’s denial that any civilians had been hurt in either Iraq or Syria: “We can proudly state that we are achieving all of our goals. Our objective of 100% mission effectiveness, without civilian casualties, continues to be the reality,” he said.

Such remarks have implied that only incidents which potentially breached international humanitarian law might be investigated. This would place Belgium at odds with the Coalition, which has indicated that all 624 civilian deaths so far admitted in Iraq and Syria have resulted from lawful – if unfortunate – actions.

Public research also suggests that even with the greatest care and adherence to international law, airstrikes do kill civilians. Airwars researchers estimate that as of August 8th a minimum of 4,887 civilians had likely died in Coalition air strikes since 2014. In Mosul and Raqqa in particular, civilians have paid a high price in the fight against ISIS.

Even so Belgium – like all twelve other nations in the alliance apart from the United States – continues to proclaim zero civilian deaths.

Belgian Defence Secretary Steven Vandeput declined to comment on the two specific incidents identified by Airwars this week when questioned by national daily De Morgen: “The procedure is that when there is a presumption of civilian casualties, Belgium itself requests an investigation by the International Coalition”, Vandeput told the newspaper. “I have no knowledge of an ongoing investigation into civilian deaths that involved the Belgian military.”

The Minister’s comments did not address the fact that Belgium now appears to be in dispute with the Coalition about whether civilians were harmed in the two events. 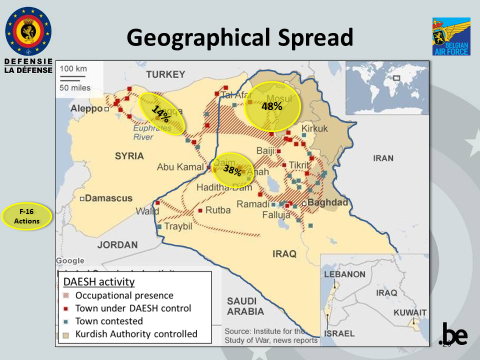 Locations of Belgian F-16 actions until June 2017. While 14% of missions were carried out in Syria, Iraq saw the greatest share of Belgian air strikes – with 48% near Mosul (via Belgian MoD)

Belgium’s air campaign in Iraq and Syria, already in its third year, was recently extended by the government until the end of 2017. Personnel and F-16s were initially expected return to Belgium early in July, and according to Colonel Poesen “many had made different plans for summer.” However the Netherlands – which has alternated Coalition bombings with Belgium – decided not to go back to war prior to 2018. The Coalition therefore asked Brussels to prolong its own mission.

Despite the lengthy conflict and hundreds of airstrikes, apart from a select group of politicians it is not possible independently to assess how Belgian actions have impacted the lives of civilians in Iraq and Syria. Details about the location, dates and targets of airstrikes are publicly withheld “for security reasons.”

When asked, Colonel Poesen said that the Belgian military was not planning to follow Australia’s recent example of improving public accountability, since it claimed to be “fully transparent in the Parliamentary committee behind closed doors.” Some argue that now may be the time for Belgium publicly to account for any problematic actions it has been involved in, even if they are few.

“More transparency and accountability are urgently needed to avoid civilian victims caused by Belgium,” said Willem Staes, policy officer for the Middle East at Belgian group 11.11.11. “Our contacts in the field have been sending alarming signals for months now: citizens are increasingly caught between local terror, and scorching international bombings.”

The organization also emphasizes what it sees as the vital military-strategic importance of a stronger focus on the fate of Syrian and Iraqi citizens: “Secrecy around civilian harm gives room to ISIL propaganda. If civilian protection is not taken really seriously now, ISIL will never be sustainably defeated and we will just wait for an ISIL 2.0.”

No transparency in Europe

Belgian openness about the two Coalition-confirmed events might offer a positive example of increased transparency to other members of the alliance. So far, no country except the US among the 13-member Coalition has admitted that civilians were killed or injured as a result of its own air campaign against ISIS. In contrast, the United States has admitted causing around one civilian death for every 40 of its own airstrikes.

Yet European countries have carried out more than 3,500 strikes against ISIS between them since 2014. Based on the Pentagon’s admitted casualty rates, it would appear impossible that no civilians were harmed during these non-US raids. As Airwars revealed in May, at least 80 civilians have in fact been killed in airstrikes carried out by allies other than the US. None of the countries involved will publicly accept responsibility.

According to military data presented to Parliament last month, Belgium has launched a total of 871 bombs against ISIS – roughly 4% of the Coalition total – since 2014. While 324 bombs were dropped during the first round of missions (September 2014 to June 2015), the second campaign – which started on July 1st 2016 – has seen 547 munitions released so far.

Bombs were mostly dropped on Iraqi territory: with 48% around Mosul and 38% near the border with Syria. In total, 14% of the raids during the last year were flown above Syria. According to Poesen this number could be slightly higher, as some of the strikes listed as taking place in Iraqi border areas may have hit Syrian territory.

Belgian raids have been carried out exclusively with 500 lb or 2,000 lb bombs – and not the 250 lb Small Diameter Bombs (SDB) that were said to have been  ordered for raids in urban areas. In November 2016, Major-General of the Belgian Air Force, F. Vansina, told the Belgian daily De Morgen that munition had been ordered “which has only half of the explosive load and can therefore be used in densely populated areas.” According to Vansina, Belgium would refuse strike orders in residential areas until the smaller and more accurate bombs had arrived.

Last month however, Defence Secretary Vandeput revealed that the American-made precision munitions had still not been delivered and would not arrive before 2019. This raised key questions about Belgium’s involvement in the bloody battle for Mosul. Contrary to what Major-General Vansina had suggested, nearly half of all Belgian raids since July 2016 were reportedly launched above Iraq’s second city – clearly a densely-populated urban zone.

Moreover according to the Minister, compared to the 2014-2015 Belgian campaign the “duration of missions has increased over time, as well as the intensity of strikes.”