The first strike report, issued on May 8th, references the period from April 18th to the 30th. The Australian Ministry of Defense says its pilots carried out airstrikes on seven days during that time, all in Mosul.

Civilian casualties from airstrikes were alleged in the city on five of the seven days that Australia reported striking Iraq’s second largest city. However with multiple allies bombing the city from the air and ground – as well as attacks by so-called Islamic State – attribution for recent incidents has proved very challenging. Australia did not make any reference to civilian casualties in the strike report, only stating that “All ADF [Australian Defense Force] personnel comply with International Law and limitations designed to protect coalition forces and minimise the risk to civilians.” 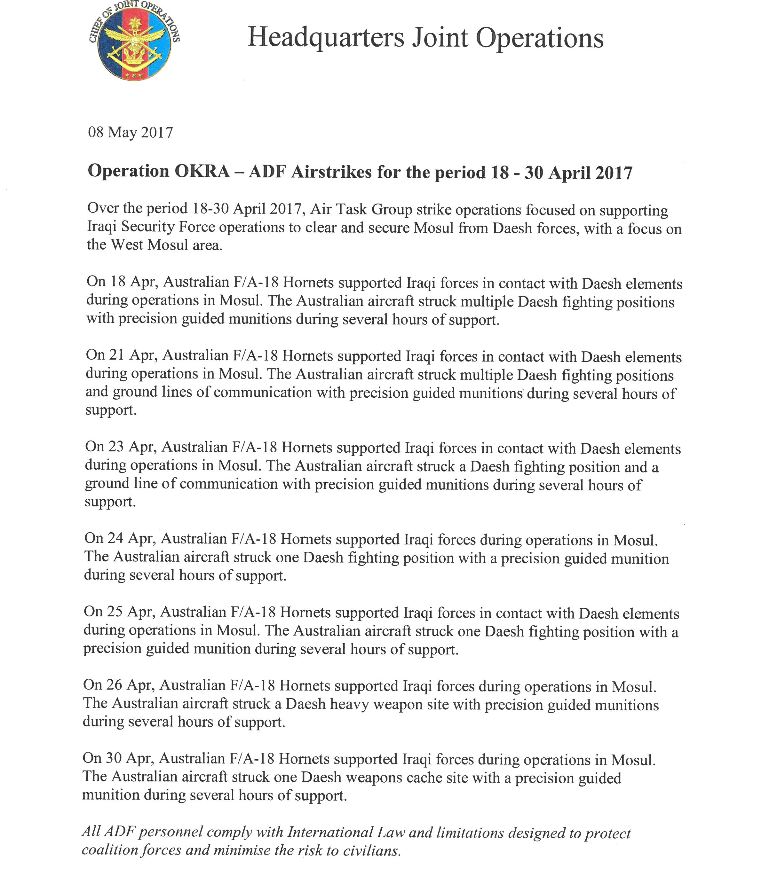 The strike report and new posture is a far cry from the ADF’s stance earlier this year, when it replied to a Freedom of Information request by stating it “does not specifically collect authoritative (and therefore accurate) data on enemy and/or civilian casualties in either Iraq and Syria and certainly does not track such statistics.” The ADF later told the Australian Broadcasting Corporation to speak with US officials – not Australia – about civilian casualties involving its forces.

In December 2016, Australia was also prominently featured in an Airwars audit of the Coalition as one of the alliance’s least transparent members. Airwars called on the country’s military to release both the time and location of its strikes in Iraq and Syria and any details of cases where it assessed and investigated possible civilian casualties resulting from Australian strikes.

“We’ve been calling on the ADF for some time to join other allies in reporting the date, place and target of strikes, so this is a significant and welcome step forward for Australian transparency and public accountability,” said Airwars director Chris Woods, who authored the December audit.

Earlier this month, the ADF said that a March decision by the Coalition to review its strike reporting had led to Canberra’s move to review its own procedures.

“This decision comes after weighing the importance of reporting ADF airstrikes in Iraq and Syria against the potential propaganda advantages it might provide Daesh and any risk to the safety of ADF personnel on operations,” said the ADF. Authorities will release their own civilian casualty assessments, said the ADF, “in addition to CJTF-OIR’s monthly civilian casualty report.”

To date, Australia has admitted that its forces took part in Coalition attacks on two occasions that led to “credible claims of civilian casualties.” Both cases were brought to light in September 2015 as a result of Airwars working with Australian media.

As of May 8th, Airwars estimates that the Coalition is likely responsible for at least 3,294 civilian casualties in Iraq and Syria. No non-US partner has admitted to killing a single civilian.

Airwars is also calling for the ADF to release details of all previous Australian strikes in Iraq and Syria so that all reports can be checked against public claims of civilian casualties.