New Airwars research shows that for the first time since Moscow intervened in Syria’s civil war in September 2015,  airstrikes  by the  US-led Coalition are now claiming the lives of more civilians than Russia’s brutal aerial campaign

Likely civilian deaths as a result of Coalition actions are also higher for January. Airwars presently estimates that at least 254 non-combatants were likely killed in 47 strikes evaluated as “fair” – where there are multiple local reports of civilian casualties, and confirmed Coalition airstrikes in the near vicinity on the same date. January’s civilian toll is by far the highest to have been assessed by Airwars in more than two and a half years of Coalition airstrikes.

Monitoring groups have put non-combatant deaths in Syria from Russian strikes in January far lower. The Syrian Network for Human Rights, for instance, has reported that 48 civilians were killed by Moscow’s actions – against a minimum of 91 civilians killed by Coalition strikes in Syria for the same month – a figure somewhat higher than Airwars’ own estimated minimum of 65 civilians killed in Syria only by the Coalition.

The Syrian Observatory for Human Rights puts the figure for January for those killed by both Syrian government and Russian raids and shelling at 180.

One year ago, in January 2016, Russia killed at least 713 civilians according to Airwars estimates.  That was 14 times more deaths than were attributed to the Coalition for the same month.  But now roles may be shifting.

An inflection point for Russia and the US

Russian and Coalition casualty figures for the first month of 2017 appear to represent an inflection point in the two campaigns, which together have likely left thousands of civilians dead.

Well into December 2016, Russia was still targeting civilian-populated areas of eastern Aleppo with bombs and missiles,  as regime forces retook the city’s last rebel-held neighbourhoods. A ceasefire deal was reached with the involvement of diplomats from Iran, Turkey and Russia followed shortly after. And the pace of Moscow’s airstrikes – along with their threat to civilians – has since slowed.

In parallel, the Coalition has ramped up its own operations – with civilians now at more risk. In Mosul, heavy Coalition air and artillery strikes in support of Iraqi Security Forces (ISF) have targeted fighters of so-called Islamic State (ISIL) for more than three months. And in Syria – barely reported by international media – the Coalition has been backing an aggressive ground campaign by Kurdish proxies to encircle  ISIL’s self-declared capital of Raqqa.

“The regime’s Russian-backed military gains of the last year, of which the seizure of Aleppo and Russia’s subsequent rapprochement with Turkey have been key, mean that the breadth and intensity of combat has been significantly diminished,” Julien Barnes-Dacey, a senior fellow at the European Council on Foreign Relations told Airwars, referring to the level of fighting and bombings in Syria.

“The Russian-led shift,” added Barnes-Dacey, “comes just as the fight for Mosul and towards Raqqa has picked up new intensity, resulting in increased casualty numbers – a trend that could accelerate further if President Trump relaxes the rules of US engagement as some are anticipating.”

New US President Donald Trump has given Pentagon commanders 30 days to come up with a more aggressive plan to defeat ISIL. According to reports this may include further relaxing restrictions aimed at limiting harm to civilians on the battlefield.

Yet as Airwars reported on January 20th, the civilian toll from US airstrikes was already escalating steeply  in the final months of the Obama administration. From the start of operations to capture Mosul on October 17th through Obama’s last day in office on January 20th, Airwars researchers assessed that at least 294 civilians were likely killed in that city alone. Unlike the siege of rebel-held areas in Aleppo, these strikes – if not the ground fighting itself – have received relatively little media coverage. In Raqqa governorate, 62 civilians were judged as likely killed in the same period. 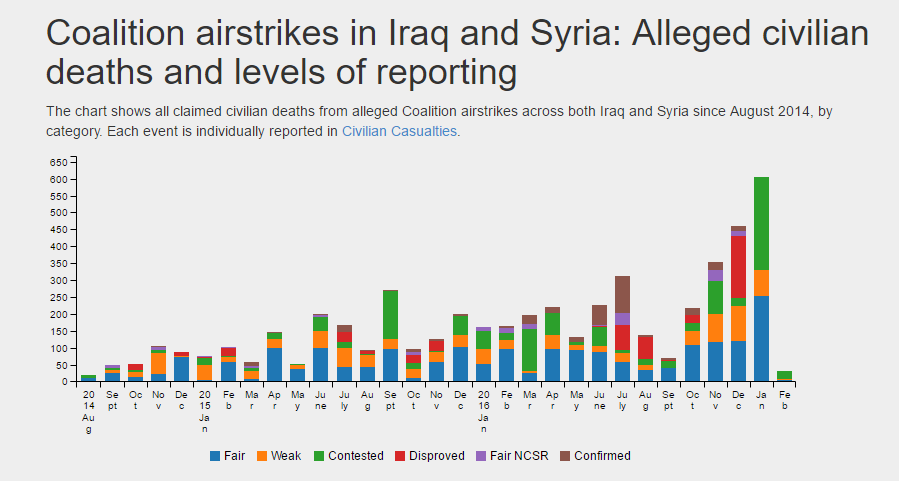 These trends have continued into Trump’s presidency. On his second day, as many as 15 civilians, including women and children, were reportedly killed in strikes on the Al-Rashidiyah neighborhood of Mosul. Local residents blamed the attack on the Coalition, which they say targeted  a car bomb but which also destroyed a civilian house.

Airwars was able to reach a family member inside Mosul whose relatives were killed in the strike. “The house was targeted by Coalition airstrikes at 12:22PM on Saturday [January 20th],” the relative says. “Four family members were killed as well as seven others who had come to the house as guests. The guests were employees of a medicine factory in the same area.”

Airwars has also been provided with a picture from the scene that appears to depict the remnants of an American-manufactured ammunition in the rubble. Two weapons experts, including Human Rights Watch’s senior arms researcher Mark Hiznay indentified the remnants as belonging to an American-produced Hellfire air-to-surface missile. The US, UK and Iraqi militaries all possess Hellfires. 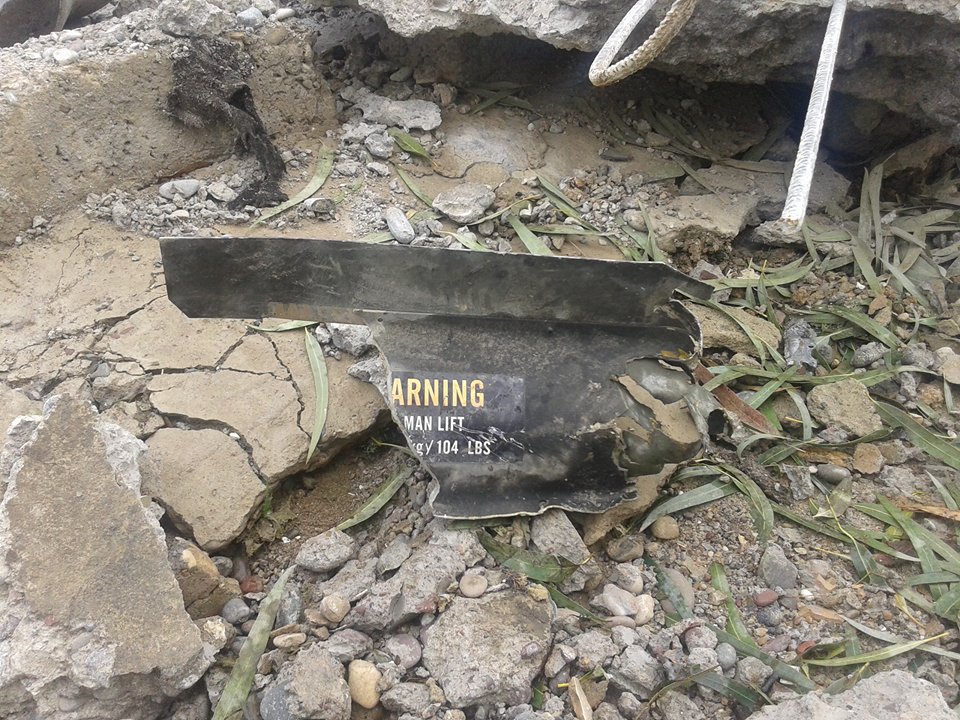 “January was the deadliest month yet for civilians in Mosul,” says Airwars’ Iraq researcher. “More than 50 airstrikes reportedly targeted them, killing in their homes women, children, professors, engineers and physicians.” In total, at least 133 strikes took place in Mosul during January, according to daily Coalition strike reports.

Shamsah Jasim Hassan Ali, one of those killed in the January 21st strike. (Image courtesy of Fatihil Jasim).

“It is true that the left (eastern) side of Mosul has been liberated, but civilians paid a very high price,” he added.

Meanwhile, having reportedly discarded plans drawn up by the Obama administration to take Raqqa from ISIL with the assistance of Syrian-Kurdish forces, it remains unclear what President Trump’s plan are in Syria. For the last several months, the Coalition has launched numerous daily strikes – up to 22 in a 24-hour period – in the vicinity of the city, primarily in surrounding towns and villages that are held by ISIL.

During January, Coalition forces launched at least 336 strikes “near” Raqqa – a massive tally – according to daily strike reports. Without a clear strategy to take the city with ground forces, airstrikes are likely to endure for an extended period of time, and continue to claim the lives of civilians – potentially without matching gains in territory.

Syrian monitoring groups reported large death tolls in Raqqa from Coalition strikes just days into the New Year. On January 6th, airstrikes northeast of Tabaqa were said to have killed at least eight  civilians. Other strikes in the area have claimed dozens of lives. Those trends have continued during the opening weeks of the Trump administration. On January 27th, four civilians including up to three children were reportedly killed in Shanina village in Raqqa governorate. On January 30th, al Tabaqa was hit again, killing up to three civilians – this time reportedly by a raid which struck a school. Local sources said one of the casualties was a person with special needs.

Fadel Abdul Ghany, director of the Syrian Network for Human Rights, said the contrast with Russian strikes – which for months targeted medical facilities and other protected sites in clear violation of international law – was changing.

While Russia continues to bomb opposition controlled areas, elsewhere “the level of strikes has dropped and in some areas stopped completely, which has had a very positive impact on the lives of people living in those areas,” said Ghany. “We are starting to see an increase in the movement of civilians between villages and cities, in markets and various workshops. Children are back playing out in the street and out in the farms.”

The point, he said, was not that Russia had discovered human rights norms, but that the Coalition risked alienating more Syrians as its bombing campaign against ISIL heads towards its third anniversary.

“The big and fundamental difference is that international coalition countries are leading countries in the defense of human rights,” he added. “Unfortunately, this huge number of victims [caused by the Coalition] hasn’t led these countries to change their combat strategy.”

▲ Man stands in front of destroyed homes in Mosul on January 12th. (Image courtesy of Iraqyoon)