The Credibles: How Airwars secured the most comprehensive locational data on civilian harm ever released by the US military

The US-led Coalition has released to Airwars the near coordinates of almost all confirmed or ‘Credible’ civilian harm events in Iraq and Syria in the long war against so-called Islamic State, allowing for the first time the accurate locating of 341 confirmed incidents and almost 1,400 civilian deaths since 2014.

The groundbreaking decision by the US-led Coalition – which came after several years of patient engagement by Airwars – will enable affected Iraqis and Syrians for the first time to know whether their loved ones were caught up in a particular event. That in turn could open the way for both apologies and ex gratia payments from the US and its international allies.

Former chief Coalition spokesman Colonel Myles Caggins said that the decision to share the data had been taken in the interest of transparency: “We take every allegation of civilian casualties with the utmost sincerity, concern, and diligence; we see the addition of the geolocations as a testament to transparency, and our commitment to working with agencies like Airwars to correctly identify civilian harm incidents.”

“The release of this locational data for confirmed civilian harm events in Iraq and Syria – accurate in some cases to just one metre – sets a new and welcome transparency benchmark,” Airwars noted. “We appreciate the US-led Coalition’s decision to release this important material, which should help affected Iraqis and Syrians to secure some closure following tragic losses within their families.”

What the data shows

In August 2014 the US-led coalition began bombing so-called Islamic State after militants had seized large swathes of territory in Syria and Iraq. Millions of civilians were trapped in a brutal war that lasted several years, with fighting often taking place in heavily built-up neighbourhoods.

Over the years the US-led Coalition has admitted many hundreds of civilian deaths from its own actions – though identifying exactly where these took place has been a major challenge.

The release to Airwars of hundreds of coordinates of Credible incidents – most accurate to within 100 metres and some to within just one metre  – is believed to be the most comprehensive locational civilian casualty data ever released by the US military.

Airwars has now added a new mapping and research tool to its website, The Credibles, which comprehensively maps all located incidents across both Iraq and Syria. The data has also been visualised in partnership with The Washington Post.

The locational data provided by the US military is, Airwars believes, unique. No previous belligerent is thought to have revealed at scale – either during or after a war – exactly where and when it has harmed civilians.

Many of these incidents have already been well documented by affected communities themselves, with associated photographs, videos, and eyewitness narratives. Airwars also presently lists the names of more than 900 victims from these located events.

Just three of 344 confirmed Coalition civilian casualty incidents have been omitted from the data release. One recent case involved Coalition ground troops in Iraq, suggesting possibly sensitive Special Forces operations. Another event is still being queried with US Central Command (CENTCOM). The third case is the sole British-confirmed anti ISIS event, from March 2018 – with the UK Ministry of Defence still declining to release any locational information.

More than 29,600 civilians have locally been alleged killed by US-led Coalition actions in Iraq and Syria since 2014, according to Airwars monitoring of local populations. The US was initially slow to engage – with just three civilian harm events confirmed by CENTCOM in the first 16 months of the war.

Beginning in 2016, the process of casualty assessments by the US military became more systematised – in part as a result of an increased focus on casualty mitigation by the Obama administration during its last months in office; and in part because of pressure from Airwars and other NGOs, which between them were tracking local allegations of civilian harm from Inherent Resolve actions in both Iraq and Syria.

In December 2016, the Coalition took over civilian casualty assessments from CENTCOM (although almost all personnel continued to be drawn from US forces.) The US-led alliance also began publishing monthly civilian harm assessments – which continue today. In total, CENTCOM and the Coalition have now assessed almost 3,000 alleged civilian harm events in the war against ISIS, to date confirming as Credible some 344 of these incidents.

Around one in four of these Credible events have resulted directly from Airwars referrals to the Coalition, meaning that without local reporting by affected communities – and the patient work of Airwars’ own Syrian and Iraqi researchers collating and preserving those reports – the events would not have come to light.

While the confirming of multiple civilian casualties in Iraq and Syria by CENTCOM and the Coalition was generally well received, there were often significant challenges in properly identifying the location of such events.

Press releases issued via military public affairs teams only tagged a Credible event to the nearest large population centre. In the September 2017 report for example, the Coalition declared a major confirmed civilian harm event in Mosul: “March 14, 2017, near Mosul, Iraq, via media report: During a strike on ISIS fighters engaging partner forces from a fighting position, it was assessed that 27 civilians in an adjacent structure were unintentionally killed.”

The month of March 2017 saw very heavy fighting at Mosul. Airwars tracked five separate claimed civilian harm events in the city for March 14th alone (two of them mass casualty incidents), with some days seeing more than a dozen allegations. Without the correct coordinates, affected Moslawis could never know whether their loved ones were (or were not) affected by particular strikes.

For the March 14th 2017 event cited above, Coalition officials eventually provided Airwars with coordinates in Mosul accurate to within just one metre (38SLF2901422174), confirming that the event took place in the neighbourhood of al Jadida. The challenge was whether such precise data could now be acquired for all confirmed events.

Such data could also help to prise open the door on possible restitution for civilian harm from US and Coalition actions in Iraq and Syria. According to the Pentagon, only six ex gratia payments were made to Iraqis during 2019, compared with more than 600 such awards for Afghanistan. Poor public locational data from Operation Inherent Resolve for confirmed civilian harm events has majorly hampered the ability of Iraqis and Syrians to pursue claims – until now. 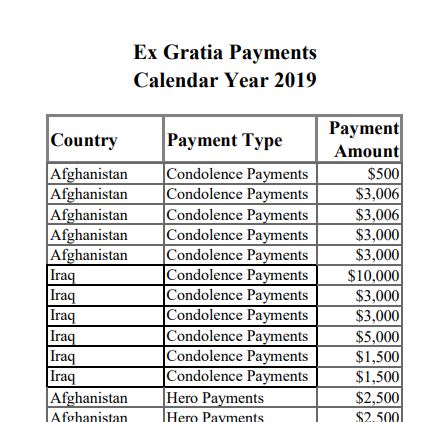 Ex gratia payments awarded by the US in Afghanistan during 2019 were one hundred times higher than in Iraq. Poor public locational data by CJTF-OIR for confirmed events likely contributed to that disparity.

Following a face to face meeting with senior officials in Tampa in May 2016, CENTCOM and Airwars began regularly sharing data on civilian casualty allegations, in order to improve understanding, on both sides, of reported non combatant harm. That relationship has continued, with sometimes weekly confidential engagements between the Coalition’s CIVCAS Cell and the Airwars military advocacy team, involving granular queries from both parties.

Alongside its monthly public press releases, the Coalition for several years provided Airwars with a private, annotated version of the monthly release, which both identified the geolocation of the event – and also, where possible, specifically cross matched Credible incidents to coded events already in the Airwars database. This locational information was provided by CJTFOIR on the expectation that Airwars would make it public through its own database of civilian harm events.

By early 2018 the Coalition was consistently providing MGRS data every month to Airwars for both Credible and later, for ‘Non Credible’ events. However this still left 126 historical confirmed cases for which Airwars had no locational data.

In early 2019, Airwars asked both the Coalition and the US Department of Defense to release this information – arguing that the alliance’s significant transparency in confirming civilian harm cases was being weakened by our then being unable publicly to determine where such cases had actually occurred. It was also argued that the US could better distinguish itself from Russia and other belligerents, who instead chose to hide or deny civilian harm from their own actions.

The missing locational data was provided to Airwars in Summer 2019 by the Coalition’s civilian casualty assessment team – a major step forward for transparency and public accountability. Later that year, the Coalition also began publishing MGRS data as part of its regular monthly public reporting. 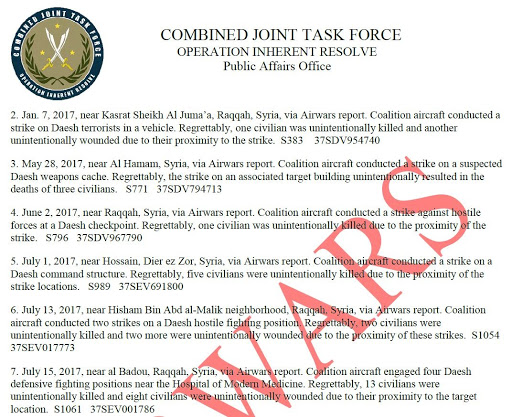 The Coalition began sharing Credible close coordinates with Airwars in 2016, at first in private annotated versions of public reports.

The Credibles dataset offers significant potential for visualisations, allowing for each confirmed US and allied civilian harm event in both Iraq and Syria to be precisely mapped and timelined. Additionally, each event can be cross matched to an associated Airwars incident report. More than 900 victim names are linked, along with associated photographs, videos, witness statements, and satellite imagery analysis of bomb sites.

Airwars has built a new subsite illustrating the remarkable potential of this unique transparency dataset. Each US-led Coalition Credible event has been precisely mapped down to at least 100 metres, and timelined across the war.

“The significance of this information for the affected communities led us to create an interface that would make the dataset easily accessible, and represent the information in a way that reflected its accuracy,” says Lizzie Malcolm of Scottish-American design team Rectangle, which conceived the new subsite.

The Credibles data sets a new benchmark for US military accountability for civilian harm. It’s hoped that the release of such accurate geolocational data can now become standard both for the US military and its allies.

▲ The US-led Coalition has released to Airwars the close locations of almost every confirmed civilian harm event since 2014.