After six years of Russian airstrikes in Syria, still no accountability for civilian deaths

Airwars has tracked up to 23,000 civilian deaths from Russian military actions since 2015 - with Moscow yet to concede a single casualty.

To mark the sixth anniversary of Russia’s military intervention in Syria, Airwars is highlighting just five of the countless civilian harm events that characterise Russian involvement in the conflict.

Overall since 2015, we have identified 4,615 incidents where Russia is alleged to have caused civilian deaths or injuries. This September alone, we estimate that ten civilians have been killed by alleged Russian strikes – including five children. This brings the total estimate since 2015 to a minimum of 14,216 civilians killed only in incidents Airwars has deemed fair, confirmed or contested.

This figure is a conservative estimate. As many as 23,936 civilians overall are locally alleged to have been killed by Russian actions – among the worst tolls of any belligerent or conflict monitored by Airwars. However, many of these reported deaths are contested between Russia and the Syrian regime it supports, making clear attribution frequently challenging. Airwars is continuing to carry out deep research into events that took place between late 2019 and 2020, with the updated civilian harm data expected to be released early next year.

Our Syrian team members have selected five major incidents from our archives that show how Russia has waged war in Syria – and the ongoing cost of its operations on civilian life.

We focus on civilian harm caused by high-intensity vacuum missiles; the staggering numbers of children credibly reported harmed; the challenges of naming all victims during such a high intensity conflict; and finally, the use of targeted attacks on healthcare workers and first responders.

Focusing on the civilian harm caused by Russia alone does not reflect the full picture of large-scale death and destruction over the past ten years of conflict in Syria. Airwars continues to monitor all foreign interventions in the Syrian conflict; for example, our monitoring of US led coalition activities can be found here, while our monitoring of Turkish military engagement can be found here.

Syrian monitoring groups – such as the Syrian Network for Human Rights; the Syrian Observatory for Human Rights; and the Violations Documentation Center – also continue to track the devastating civilian harm caused by the ongoing civil war, most of it resulting from the actions of the Assad regime.

Vacuum or ‘thermobaric’ missiles are a particularly deadly weapon, allegedly used by both Russian and Syrian Regime forces throughout the conflict. Russian forces were first accused of using vacuum missiles in Syria on the first day of airstrikes, on September 30th 2015, in an attack that reportedly killed 18 civilians in Talbiseh. A doctor working at the hospital receiving casualties described the impact of the missile as causing “cases of suffocation as a result of dust and smoke”, killing civilians with “enormous pressure or shrapnel that pierced their bodies and tore some of them into pieces”.

Absolute confirmation of the use of a particular weapon in Syria remains a major challenge. Of the 4,615 civilian harm events categorised by Airwars as likely being Russian (including contested events such as Russian and/or regime attacks), we identified 244 incidents where local sources mentioned that ‘vacuum missiles’ had been used in the attack. These strikes were found to have caused at least 875 deaths.

While we may not know for sure if vacuum missiles were used in each of these events, we have chosen to highlight one case that offers some insight into the level of destruction caused by high explosive weapons, and the complexity of such events.

This incident took place in April 2017, where nine children and their grandmother were likely killed in repeated airstrikes on Ma’arat Hurma, Idlib. The site was reportedly hit multiple times, with buildings almost completely raised to the ground and victims buried under many layers of rubble. In the final high-intensity strike, an ambulance being used to tend to the initial victims, was left burning.

Media outlet RFS observed that “the raids were highly explosive and caused extensive destruction to civilian homes. Six houses and more than 25 shops were destroyed and other material damage occurred in the places where rockets fell”.

Our assessment identifies the victims likely killed in the attack – all members of the Al Nabo family, with the youngest child just two years old. Images posted to social media show the buildings razed to the ground, while a video posted by first responders, the White Helmets, show the bodies of small children being carried through the rubble.

While ceasefire agreements in 2020 saw a downturn in Russian strikes, this temporary relief for Syrians has likely now come to an end, as we’ve seen the resumption of weekly, and sometimes daily, Russian airstrikes in different parts of Syria. In September 2021 alone, children account for half of all deaths caused by alleged Russian strikes and almost half of all injuries. This includes one child reported injured earlier this week, in alleged Russian or Syrian regime strikes on the town of Majdlaya.

Taking the most conservative estimates – the minimum number of reported civilians killed – children could account for 34% of all casualties in Syria resulting from alleged Russian strikes. The indiscriminate nature of Russian airstrikes has resulted in the deaths of entire families of children, including babies just a few months old.

One of the children killed was 8-year old Hamza Khaled Habib, cousin of the Ajaj family. In an event that reflects the scale of civilian harm in Syria, Hamza was being raised by his uncle, as his own father had already been killed in a previous airstrike. The Syrian Civil Defense (also known as the White Helmets) posted a video capturing Mr Mohamed Ajaj mourning for his wife, children and young nephew, all killed in this attack.

Only a day later at Kansafra, another Idlib town, another family was almost entirely killed, including at least four children – aged three, six, nine and twelve years old, members of the Al Omar family. A reporter with AFP saw the father crying over the bodies of three of his children in a cemetery. The reporter observed that the fourth child had to be buried in a hurry, because bombing had begun again in the area.

Only one of the Al Omar children survived the attack, the youngest, who the mother managed to rescue just moments before the strike. 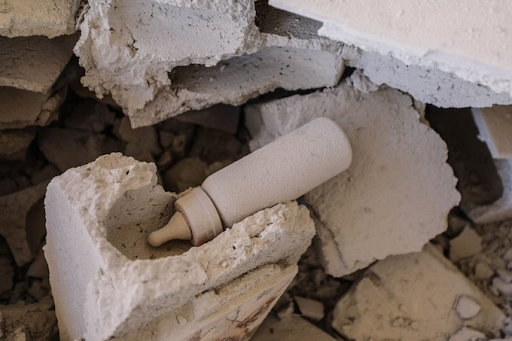 The bottle belonging to one of the children killed in alleged Russian strikes on Kansafra town, Idlib – August 2021 (Image posted on Twitter by @thawrat111)

Of all civilians alleged harmed by Russian airstrikes – estimated by Airwars at as many as 23,936 killed and 41,452 injured – we have found full or partial names for just 8,472 individuals.

This means that 87% of all civilians reported harmed in Russian strikes cannot be identified using current available datasets. While on-going deeper research being conducted by Airwars might be able to address at least some of these events, it is highly likely that we may not know the identity of many thousands of victims until Syria’s conflict ends, and a substantial truth and reconciliation process can begin.

This is due to a number of reasons, not least that the use of high-intensity weapons by Russian and other forces in Syria cause significant destruction, and often make immediate identification of casualties impossible. Syria also houses the highest number of internally displaced people in the world, estimated by UNHCR at 6.2 million, including 2.3 million children. Local sources in many cases may not recognise victims, especially those recently arrived with little documentation.

On March 22nd 2019 in Kafriya and Al Fou’a in Idlib, an incident that was referred to by several sources as a “massacre”, killed up to 28 civilians and injured as many as 30 others. A doctor named Abu Mohammed was quoted by Smart News as identifying more than 15 raids on the towns of Kufriya and al-Fuha and he noted that many civilians had moderate injuries, “mostly children and women”. The use of cluster bombs and high explosive missiles was pointed out in various sources and could be one of the reasons for the difficulty identifying victims.

Despite Airwars’ researchers finding 28 unique sources reporting on the incident, we were only able to identify one individual who was killed – Ali Wahid Qalla, a 50 year old man displaced from Eastern Ghouta. The identity of dozens of others, including children, remains unknown.

‘The death toll from the massacre committed by Russian planes in the town of #كفريا North Idlib killed 20 civilians, including 4 children, and more than 30 wounded, including critical cases, and 13 children. These have become just numbers for the hypocritical media’

In March 2020, WHO’s Regional Emergency Director in the Eastern Mediterranean, Richard Brennan, called out the international community for ignoring attacks on healthcare facilities in Syria: “What is troubling, is that we’ve come to a point where attacks on health — something the international community shouldn’t tolerate – are now taken for granted; something we have become accustomed to”.

Physicians for Human Rights (PHR) provide on-going monitoring of attacks on healthcare centres, noting that such operations are against International Humanitarian Law and constitute war crimes. According to PHR, 244 attacks on medical facilities have been carried out by either the Syria Regime or Russian forces. One such attack was investigated by the New York Times, which showed how Russian airstrikes hit four hospitals in just 12 hours in May 2019.

As PHR notes: “When these attacks on health care become as prolonged and widespread as they have in Syria, the consequences reach far beyond the individuals and facilities lost – the attacks reverberate across the civilian community, inciting fear that seeking medical treatment or going to a hospital will result in death, injury, kidnapping, torture, or imprisonment, both for the patient and the medical provider.”

One type of event Airwars researchers often report on during monitoring of Russian strikes in Syria, are so-called double-tap strikes – where first responders are hit in a second airstrike after an initial attack has caused casualties.

These first responders are most often the White Helmets, officially known as the Syrian Civil Defense, who report that 252 of their volunteers have been killed since the start of the conflict and over 500 volunteers injured. White Helmets continue to risk their lives and are often the only response teams available in remote or poorly resourced areas.

An event that took place in June 2019 is one such example, where an alleged Russian strike killed two White Helmets volunteers in Khan Sheikoun, Idlib, who were tending to the victims of an earlier strike. The two volunteers, Ali Al Qadour and Omar Kayyal, had been in an ambulance treating victims of an initial strike in the east of Khan Sheikhoun; another five of their colleagues were also wounded.

The Syrian Civil Defense published a statement that said “a thorough examination of the evidence, such as eyewitness accounts and the identification of munitions used in the attack on white helmets, has proved conclusively that the aircraft that committed the crime of targeting and killing our volunteers belong to the Russian Air Force, which used surveillance aircraft”.

The assessment is available in full on our website. 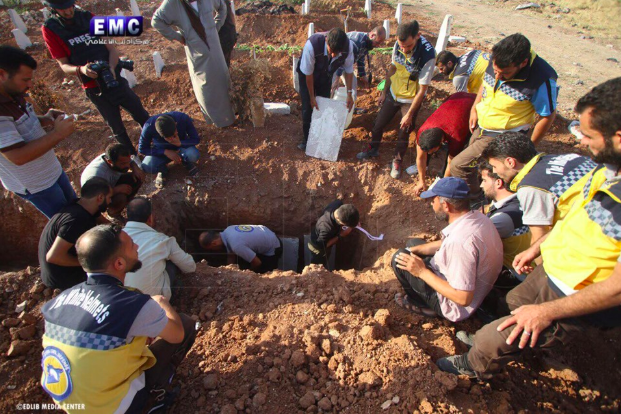 The burial of a White Helmets volunteer, following a reported Russian airstrike in June 2019 (Image via Idlib Media Centre)

▲ A street in Ariha city raised to the ground by alleged Russian aistrikes in February 2020, including the almost complete destruction of Shami Hospital. Image via Halab Today.