Likely civilian fatalities from Russian airstrikes in Syria dropped steeply between the months of February and April 2016, according to three months of new data published by Airwars – revealing the impact of a Syrian ceasefire and Moscow’s partial withdrawal of its heavy bombers at the time.

Analysis shows such steps can help save civilian lives. Even so, at least 420 civilians are likely to have died in 132 separate Russian actions during these months. And the decrease in deaths was limited – with Moscow and its allies soon resuming large scale bombardment in a campaign which culminated this December in the recapture of Aleppo.

As part of of its ongoing monitoring of alleged Russian civilian casualty events in Syria, Airwars has now published a 75,000 word assessment covering February, March and April 2016. These include 271 claimed civilian casualty incidents in Syria involving Russian aircraft, alleging as many as 1,481 non-combatant deaths between them.

Each incident is individually logged, accompanied throughout by hundreds of photographs and videos, along with links to original claims and sources. More than 680 civilian victims are named, each tracked and recorded by local monitoring groups.

Moscow has continued to deny killing any civilians in its air campaign in Syria. Despite this, the provisional view of researchers at Airwars is that in the three months from February 1st to April 30th alone, between 427 and 590 civilian non-combatants are likely to have been killed and 446 or more injured by Russia in 132 incidents. These are events where there is fair public reporting – two or more credible sources – and where Russian strikes appear to have taken place in the area.

Hundreds more civilians died in events where it is not presently possible to determine whether Russia, the Assad regime or even the US-led Coalition was responsible.

The ferocity of Russia’s bombing campaign in Syria declined sharply between late February and April 2016, according to Airwars assessments.

In February as a whole we tracked a minimum of 347 civilian deaths from 104 incidents which researchers assessed as likely involving Russian aircraft – a halving from January’s all-time high of 713 or more killed. There were few of the mass casualty events which had characterised earlier months, suggesting a shift in Russian tactics and targets – perhaps the result of international criticism at the time.

Even so Russian airstrikes continued to take a heavy toll, with women and children still at significant risk.

Most of the deaths in February occurred in Aleppo, where 47% of incidents were reported. High numbers of fatalities often occurred on the same day across multiple incidents.

On February 2nd for example – in one of four incidents in Aleppo governorate that day – at least eight children and three women were among those who died in alleged Russian raids on Hraytan. Shaam News Network posted a distressing video showing the body of a dead child “following raids by Russian aircraft“. All4Syria – which like other outlets put the death toll at 15 with more than 50 injured – said Russia had carried out up to 30 strikes on the village.

Crucially, Airwars’ database lists the names of 685 civilians who were killed in alleged Russian strikes between February 1st and April 30th – the result of diligent work by monitors such as the Syrian Network for Human Rights, the Violations Documentation Center and Raqqa is Being Slaughtered Silently. On numerous occasions entire families are said to have died.

On February 8th, four members of the Hussain Debes family – two girls and two adult males – were among up to 20 civilians who perished in an alleged Russian airstrike on a bus in Salheen, Aleppo, according to local sources. Activists told Shaam News Network that Russian warplanes had fired two missiles, while Orient News said a Russian strike targeted “transport buses carrying civilians, resulting in the burning of the vehicles, the martyrdom of those inside and serious injury to passers-by.” 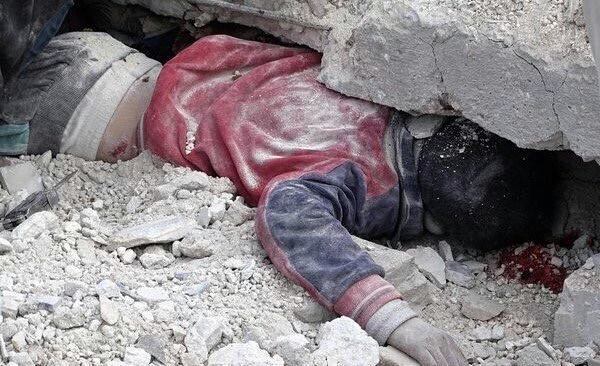 The body of a child stuck under rubble following an alleged Russian raid on Salheen, February 8th (via SN4HR)

Among the other detailed incident reports released by Airwars is an account of bombings which occurred on February 11th in Hazwan, Aleppo. According to sources, four non-combatants who appear to be from the same family died in a Russian raid. The Violations Documentation Center named the victims as an adult woman, Fatima Darweesh; two girls Sidra Darweesh and Sanae Mahmoud Darweesh; and adult male Hasan Obaid Darweesh.

On February 12th, “an appalling massacre” was reported at al Ghantu in Homs allegedly carried out by Russia – killing up to 16 civilians including four children and a woman.

Among the dead was a member of the White Helmets, named as Osama Al Khatteib. The Syrian Networked initially blamed the regime for his death, but then changed  position and pointed towards Russia, reporting that three rockets were launched on a residential area. Fourteen other victims were named the the Violations Documentation Center, including multiple members of the Rabeah, Othman and al-Khateeb families.

Overall February 2016 represents one of the worst documented periods of Russian actions. Yet in the month’s last days, a significant shift occurred which saw the number of civilians killed plummet. 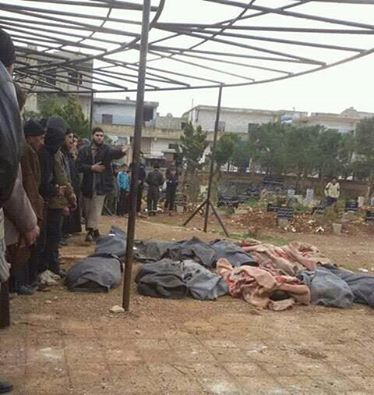 The Syrian ceasefire which came into effect on February 27th, followed by President Putin’s announcement that Moscow was partially withdrawing from Syria, had a dramatic impact on civilian deaths.

Airwars tracked an immediate effect on fatalities, with a 67% drop in casualty events between the weeks of February 22nd-29th, and March 1st-6th. When Russia then began to pull its Su-24 bombers out of Syria on March 14th, reported fatalities fell further.

Overall, for March 2016 Airwars has tracked 73 deaths which we assessed as having likely been caused by Russia. This marks a 79% decrease from the 347 civilians recorded as likely killed in February.

Seventy or more civilians also died in 16 contested events, where it remains unclear whether Russia or the Assad regime was the culprit. Indeed, as the ceasefire continued into the Spring, it became more difficult for those reporting casualties to determine responsibility. .

Despite the welcome fall in reported deaths, there were still significant civilian casualty incidents likely involving Russia during the month.

On March 11th – 12th, another public bus was allegedly targeted in a Russian strike – this time killing up to 19 civilians and injuring 20 more as it traveled to Raqqa. Some sources including the Syrian Network for Human Rights didn’t identify the warplanes responsible – a common theme in many reports throughout the month. However Al Araby, Homs Media Center and Shaam News all alleged that Moscow was responsible. Six victims were eventually named by the Violations Documentation Center, including Yasser al Habish (pictured below) and Fawaz al-Haddawi al-Fares and his two sons. 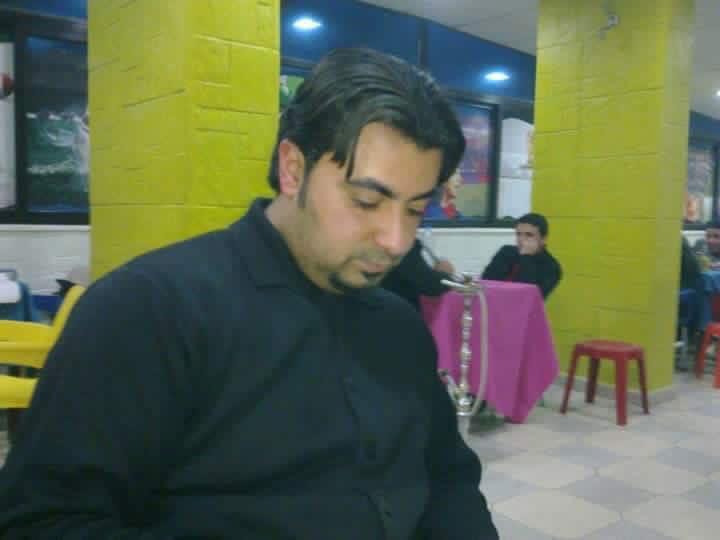 Yasser al Habish, who died when warplanes struck a coach traveling from Raqqa to Damascus, March 11th-12th 2016 (via Raqqa Is Being Slaughtered Silently)

The Coalition and Russia: a narrowing casualty gap

By April the intensity of Russian actions in Syria had further waned: Airwars tracked no alleged events until April 7th, a full week into the month. And overall, Airwars has tracked just seven deaths for April 2016 where Russia was the likely culprit.

Instead we saw a steep increase in the number of contested events – either carried out by Russia, the Assad regime or ground actions – with a minimum of 214 non-combatants reported killed.

This major reduction in likely fatalities from Russian actions in Syria significantly narrowed the gap between deaths attributed to Russian forces, and those blamed on the US-led Coalition.

By March, the 49 civilian fatalities confirmed or likely caused by Coalition actions across Iraq and Syria were close to the 73 deaths attributed to Russia in Syria during that month. And in April – when likely Russian deaths plummeted to an all-time low  – the toll of 114 civilians likely killed in Coalition actions in Iraq and Syria was far above  the seven likely deaths so far attributed to Russian strikes in Syria.

Welcome as the relative decline in Russian strikes was for Syria’s embattled civilians, it did not last.

April 2016 saw the beginnings of a shift back to the bombing of Aleppo, with 71% of all claimed incidents reported in the governorate. And by the last week of the month Airwars also began tracking a worrying rise in reported Russian incidents, signaling a new phase of the campaign which would have ominous implications for civilians.

Airwars researchers are currently assessing almost 1,000 additional casualty incidents since May 1st 2016 that allegedly involved Russia – including a record 215 events in November alone. This near-unceasing bombing has mainly been in support of regime efforts to recapture rebel-held areas of eastern Aleppo – though other areas of Syria have also been badly hit.

For a brief period in Spring 2016 Russia showed that it was capable of some restraint in Syria. That time has now passed.

Human Rights Watch has determined that Russian-Syrian airstrikes on eastern Aleppo during September and October amounted to war crimes. More recently, the UN’s human rights chief Zeid Ra’ad al Hussein said on December 14th that “the resumption of extremely heavy bombardment by the Syrian Government forces and their allies on an area packed with civilians is almost certainly a violation of international law and most likely constitutes war crimes.”