Allied nations almost certainly killed them. So why did the Defense Department tell Congress that the US was responsible?

This article was originally published by The Intercept on August 5th 2021.

The Defense Department has been forced to withdraw a key part of an official report to Congress, after wrongly claiming responsibility for killing 21 civilians in Iraq and Syria who were actually slain by close US allies.

The Pentagon was alerted to the mistake in June by Airwars, which had previously documented most of the strikes as being carried out by other partner nations in the US-led Coalition against the Islamic State, including the United Kingdom, France, and Australia.

After reviewing the findings, the Defense Department finally admitted the error on August 5th.

“This was an oversight in preparing data for the report,” Pentagon spokesperson Mike Howard said, without giving further details on how the error had occurred. “We regret the mistake.”

The revelations will add to growing concern over the Pentagon’s civilian harm policies, after senior Democrats recently accused the Pentagon of underestimating the number of civilians killed in its latest annual report to Congress and criticized the US military’s failure to pay out a single dollar in compensation to victims’ families during 2020.

“You have to wonder what is going on at the Defense Department and [U.S. Central Command] that they can’t even get right this basic obligation to report civilian harm to Congress and to the public accurately and reliably,” Hina Shamsi, director of the National Security Project at the American Civil Liberties Union, told The Intercept. “This only compounds our concerns about underlying issues such as investigations into civilian harm, in which DOD does not even talk to surviving family members for information.”

The Department of Defense’s latest annual report documenting civilians killed and injured by US actions globally was released on May 28th. The report, in which the Defense Department must inform Congress of all officially recognized civilian harm caused by the US military, has been a legal requirement since 2018.

In the latest report, the Pentagon admitted to killing 23 civilians worldwide during 2020, though monitors such as the United Nations in Afghanistan have shown the real figure is likely many times higher.

The report also incorrectly acknowledged responsibility for 50 historical civilian deaths in 11 airstrikes against the Islamic State in Iraq and Syria between January 2017 and February 2018. The Pentagon at first said the incidents had “inadvertently” not been included in reports in previous years, but most were in fact carried out by allied nations.

While the campaign against ISIS was fought by a coalition of mostly Western nations, the report explicitly stated that it “only lists civilian casualties attributed to the use of U.S.-operated weapons,” meaning no strikes conducted by allied aircraft should have been included.

The Intercept and Airwars cross-checked these incidents against public records and found that of the 11, nine were not carried out by the US at all. 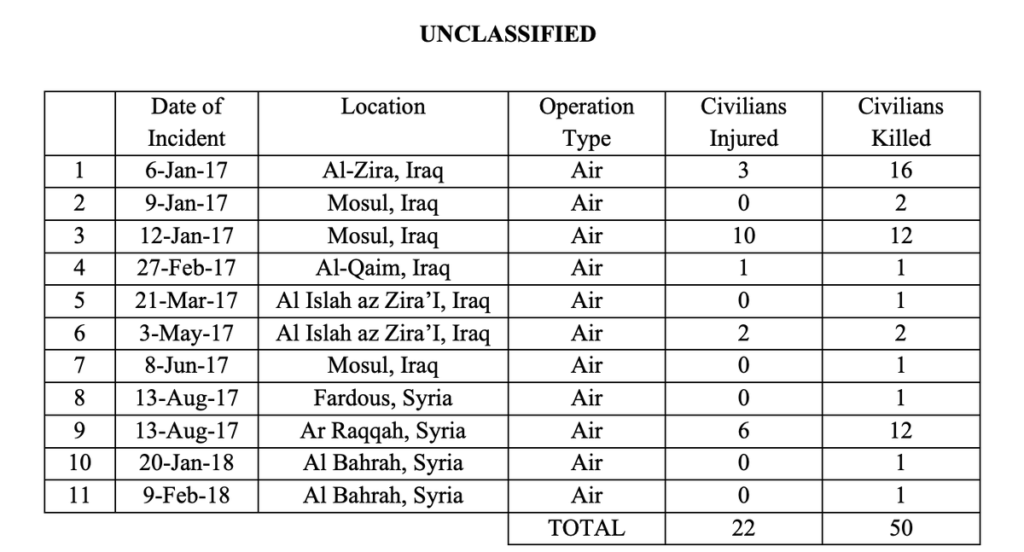 The May Defense Department report to Congress claimed responsibility for the deaths of 50 additional civilians in Iraq and Syria in 2017-2018, of whom only 28 were actually killed by US strikes. Source: US Department of Defense, May 2021.

Most of those incidents had been highlighted in a major investigation last year by Airwars, the BBC, Libération, De Morgen and RTL Netherlands, which concluded that European countries were systematically failing to accept causing civilian harm, even when U.S. military assessors declared otherwise.

The addendum released by the Defense Department on August 5th removed nine of the 11 incidents in which the US acknowledged killing civilians in its earlier report.

Two of the incidents for which the Pentagon claimed as US actions had, for example, already been admitted by the Australian Defence Force, which had taken full responsibility for killing the civilians.

In one of those airstrikes, two civilians were killed and two hurt in Mosul, Iraq, on May 3rd 2017. That event was publicly conceded by the ADF more than three years ago, with an official statement at the time saying: “On 3 May 2017, one Australian aircraft conducted an airstrike in support of Iraqi Security Forces who were under direct fire from enemy fighters in West Mosul. … Based on a review of information now available, it is possible that civilian casualties may have occurred as a result of this strike.”

Among the British incidents was the killing of 12 civilians in the Syrian city of Raqqa on August 13th 2017. The Coalition officially confirmed it had killed the civilians while targeting an ISIS mortar system; the UK later admitted to carrying out the strike, saying Royal Air Force fighter jets targeted “a mortar team in a building at the location given” during clashes between ISIS and Western-backed Kurdish forces.

Among the victims locally named that day were Walid Awad Al Qus and his young daughter Limar.

A ninth event, which killed one civilian in Al Bahrah in Syria in February 2018, was found by Airwars and Libération to have likely been attributable to the French military. Despite the findings, neither the UK, Belgium, nor France has publicly admitted to killing civilians in any of these strikes.

Airwars highlighted the errors to the US Defense Department in early June; the Pentagon then took two months to send an official correction to the report to Congress. That addendum offered no detailed explanation for the mistake.

“The text and table in the report provided in May 2021 … should be omitted and replaced because only two of the eleven incidents on the original table were ‘attributed to the use of U.S.-operated weapons,’” the text of the addendum states.

The US arguably has the world’s most advanced mechanisms for monitoring the civilian harm caused by its own military actions across the globe.

During the seven-year campaign against ISIS, the US military has admitted killing more than 1,300 civilians. While monitors like Airwars put the real figure far higher, other militaries barely accept any responsibility for civilian harm: France has not admitted to killing a single civilian, and the UK has acknowledged responsibility for just one civilian death since 2014.

The great majority of deaths from US military actions occur within US Central Command’s area of responsibility, which includes Iraq, Syria, Afghanistan, and Yemen. In recent years, CENTCOM has faced rising concerns about poor management of its civilian harm monitoring and reporting processes.

CENTCOM declined to comment on whether the error in the recent report to Congress had originated with its own personnel, referring questions back to the Department of Defense.

While publicly claiming responsibility for the deaths of civilians it didn’t in fact harm, CENTCOM has also once again forgotten some of those it did.

In November 2020, following a major Airwars study of US military actions in Yemen under President Donald Trump, CENTCOM officially admitted injuring two civilians during an airstrike in September 2017.

This was only the second time the US had ever publicly admitted specific civilian harm as a result of its airstrikes and raids in Yemen, which date back to 2002.

But that confirmed event was not included in the most recent report to Congress, and no explanation has been given for its omission.

This marked the second time in the past year that CENTCOM has apparently forgotten recent civilian harm it caused in Yemen. In November, it blamed an “administrative mistake” after saying only that it “may” have killed civilians during a botched raid in Yemen in January 2017. At the time, CENTCOM’s own commander, Gen. Joseph Votel, had told the US Senate he took personal responsibility for the deaths of “between four and 12” civilians in that attack.

Bonyan Gamal from the Yemeni human rights organization Mwatana said such errors are “painful for the families” of those injured or killed.

The recent Pentagon civilian harm report did however confirm one new case in Yemen after an investigation by Mwatana: The US admitted that it had targeted and killed an elderly Yemeni man in a 2019 airstrike. To date, no compensation has been paid or offered, and Gamal said the families of victims want justice.

“When we received the confirmation of civilian harm we contacted the family,” Gamal said. “When I spoke to them they asked ‘OK and now what?’ If there are no steps after an acknowledgment and not even an apology then what is the use for this?”