During Russia’s ongoing invasion of Ukraine, its use of cluster munitions has been widely documented. More than 100 countries have signed a UN convention banning their use, though Russia, Ukraine and the United States are among the nations yet to sign up. Such weapons are often described as indiscriminate. However on the ground, evidence of exactly how widespread their effects are can be are often hard to document. Yet a recent strike on the snow-covered grounds of a Ukraine hospital presented strong visual documentation.

Using uniquely placed, open-source videos, Airwars created a 3D model of all recorded damage locations when a cluster bomb hit the children’s hospital and a blood donation centre in the Ukrainian city of Kharkiv. One civilian was reportedly killed while waiting in line with his family to give blood, while hundreds of sick children took refuge in the hospital’s bomb shelters.

Cluster munitions can have an impact range from around 100 metres – roughly the size of a football field – to multiple times larger, depending on the height at which they detonate. Their use by Russia has been documented multiple times in Ukraine, including in-depth analysis by Armament Research.

Several munitions experts whom Airwars consulted said the wide distribution of damage at Kharkiv could suggest that Russia is detonating cluster munitions at a higher altitude than normal.

Experts said that while the video showed a wide distribution of impacts, the number of submunitions documented was consistent with potentially being a single rocket. Definitive verification would only be possible with access to the site and to munition remnants.

“It has long been known that cluster munitions are indiscriminate, but this investigation highlights the sheer scale of suffering a single strike can cause,” Emily Tripp, incoming Airwars director, said. “While more than 100 countries have banned their use, many of the world’s largest militaries still refuse to do so – despite the inevitable risk to civilians.”

How the investigation was conducted

The cluster munition strike took place on February 25th, the second day of Russia’s invasion of Ukraine. Russian forces had advanced quickly on Kharkiv, Ukraine’s second city, in the northeast of the country.

In the afternoon, local reports first emerged of a devastating attack on a children’s hospital. The first video to emerge online, shot from a car dashcam, captured the moment the cluster munitions impacted on a road just outside the hospital grounds. It was timed-stamped at 16.41. Airwars was able to document and geolocate nine explosions in this video.

A second video filmed shortly after the attack meticulously documented each impact site inside the hospital grounds. Snow coverage enabled clear images of the different impact locations, again allowing them to be geolocated and mapped. In total Airwars investigator Imogen Piper was able to document a total of 25 craters.

In addition, the video showed one unexploded submunition found right outside the hospital entrance. This was a crucial clue, enabling us to identify the type of munition. Multiple weapons experts said it was a Russian made 9N235 or 9N210 cluster submunition – the two are visually identical. 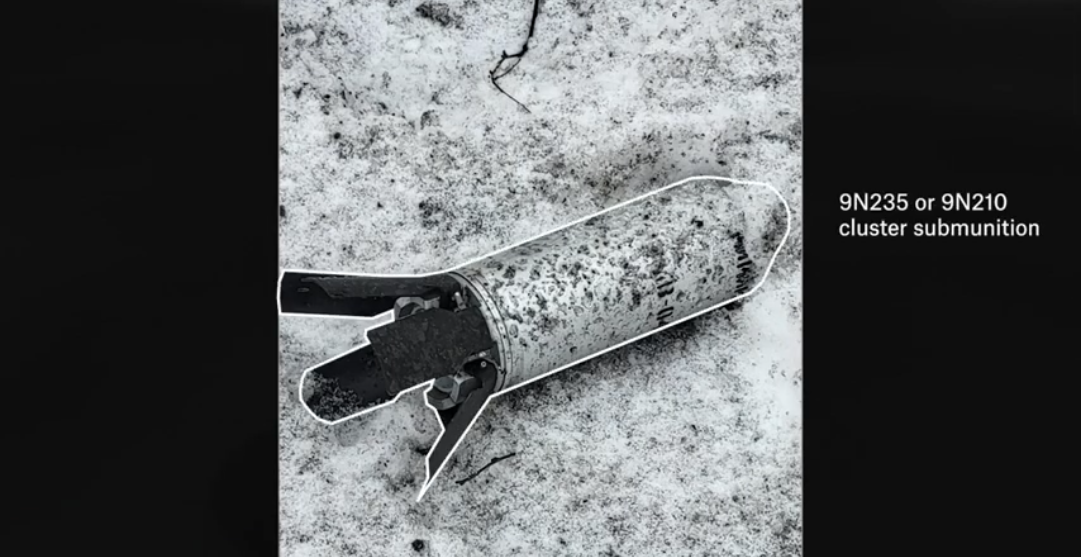 Image of the submunition found outside Kharkiv hospital (Via social media)

There are two types of rocket capable of delivering these submunitions: the, 220mm 9M27K Uragan; and the 300mm 9M55K Smerch, which carry 30 and 72 submunitions respectively.

Munitions experts told Airwars that Russia is more commonly using 300mm Smerch rockets during the Ukraine conflict; and that their larger firing range of up to 70 kilometres also corresponded to Russian military positions at this time, north-east of Kharkiv.

Whilst 350 metres is a large distribution range for a single rocket, the experts said it was still within the parameters of a single 300mm rocket attack. They added that such rockets can be released at a higher altitude to increase the spread of submunitions.

As the video documents, this makes such cluster munitions relatively ineffective if trying to hit a specific military target. Instead, as Russia’s brutal assault has shown, they cause terror and devastation among civilians, with little military benefit.