An Islamic State (ISIS) prison break in northern Syria which left hundreds dead came after years of systemic failures and ignored warnings, a VICE News documentary in partnership with Airwars has found.

Mistakes made by both the United States and its Syrian partner the Syrian Democratic Forces (SDF) meant the Al-Sinaa prison in Hasakeh was drastically unprepared for an assault, the documentary, which aired on Showtime on September 18th, found.

The detention centre housed around 4,000 alleged ISIS members, including some of its most battle-hardened militants. It had long been identified as a prime target for ISIS attack.

On January 20th 2022, the group launched its most daring offensive in three years, with attackers storming the prison while detainees rioted. In total more than 500 people were killed, including 121 SDF-employed guards and prison staff, as well as hundreds of prisoners. The exact number of those killed who were civilians remains unclear, but around 40,000 civilians fled their homes from surrounding areas.

While many of the detainees are from Syria and Iraq, others originate from the UK, France and other countries. None of the prisoners had been convicted, with no formal courts set up to deal with the fate of ISIS members in Syria. Many are awaiting repatriation to their home countries to face justice.

Despite protests of human rights groups and non governmental organisations, around 700 teenage boys under the age of 18 were also detained in one prison block. Around 100 juvenile detainees went missing in the assault, according to UN experts.

The full documentary can be viewed here.

In the days during and after the January assault, the Airwars Investigations Unit sought to fully understand the event. Building on our long track record of award-winning open-source research, the team:

Partnering with VICE News, whose investigators visited the prison and the surrounding areas, we used this forensic analysis to understand the causes and impact of the prison break, as well as what it means for the resurgence of ISIS as a terrorist organisation. 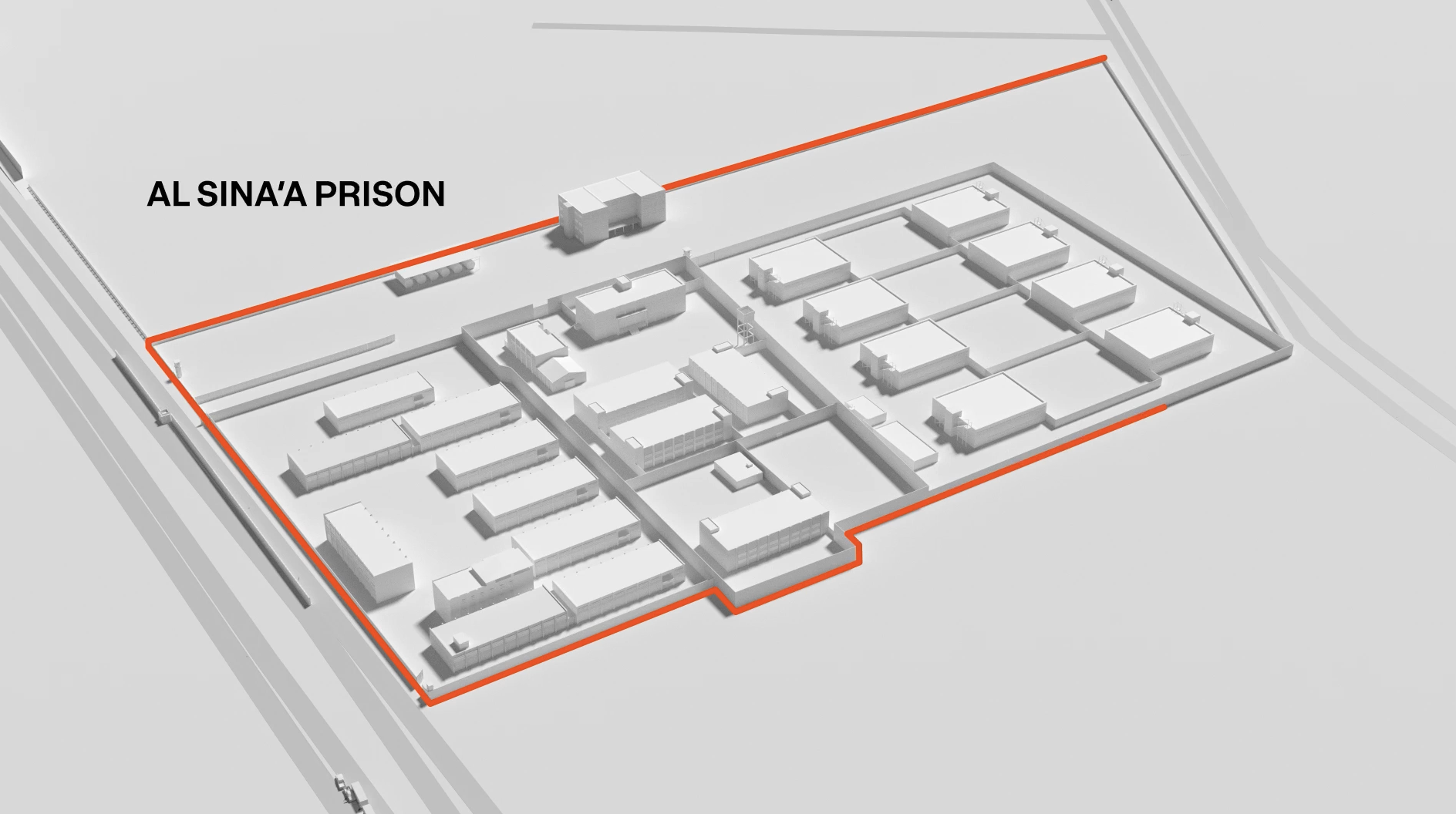 A screengrab of Airwars’ 3D model of the Al-Sinaa Prison in northern Syria.

Breakout more than a raid?

After the fall of the ISIS caliphate in 2019, tens of thousands of fighters, members and alleged supporters were sent to detention centres in north-east Syria.

Most women and children were sent to the vast al-Hol and al-Raj camps. The SDF run the detention facilities, supported by the US and other members of the anti-ISIS coalition.

The most serious ISIS members – those alleged to have fought with the group – were sent to Al-Sinaa.

The prison itself was in fact a former school building and was quickly deemed to be unsuitable and unsafe for housing large numbers of prisoners.

Multiple reports sent to the US Congress by the US-led military coalition to fight ISIS – known as Operation Inherent Resolve – also warned that prison riots and attempted breakouts were a regular occurrence. In some cases prisoners were even reported to have dug under walls and ripped doors off their hinges. One report, published in 2020, even warned that “the risk of a mass breakout cannot be discounted.”

Despite the warnings, conditions in the prison were left to deteriorate.

Since 2019, the US has provided hundreds of millions of dollars to equip and train SDF forces, but multiple requests for funding to fortify the prison went unanswered, SDF officials told VICE. Prisoners were held as many as 100 per cell, with tuberculosis becoming endemic. The United Nations and Human Rights Watch warned the prison was a breeding ground for extremism.

James Jeffrey, former US special representative for Syria under President Donald Trump, denied to VICE that the prison was ignored, but admitted fortifying it was just one of many competing priorities.

On January 20th ISIS fighters attacked the prison from multiple directions, creating diversions and driving an improvised explosive device (IED) into the main gate. In the ensuing chaos, hundreds of prisoners rioted and escaped their cells, some armed with weapons. Such was the state of internal security that some prisoners were able to smash through the thin cell walls, footage seen by Airwars shows.

Many ran into the surrounding neighbourhoods, which were densely populated, with fighting continuing until January 30. 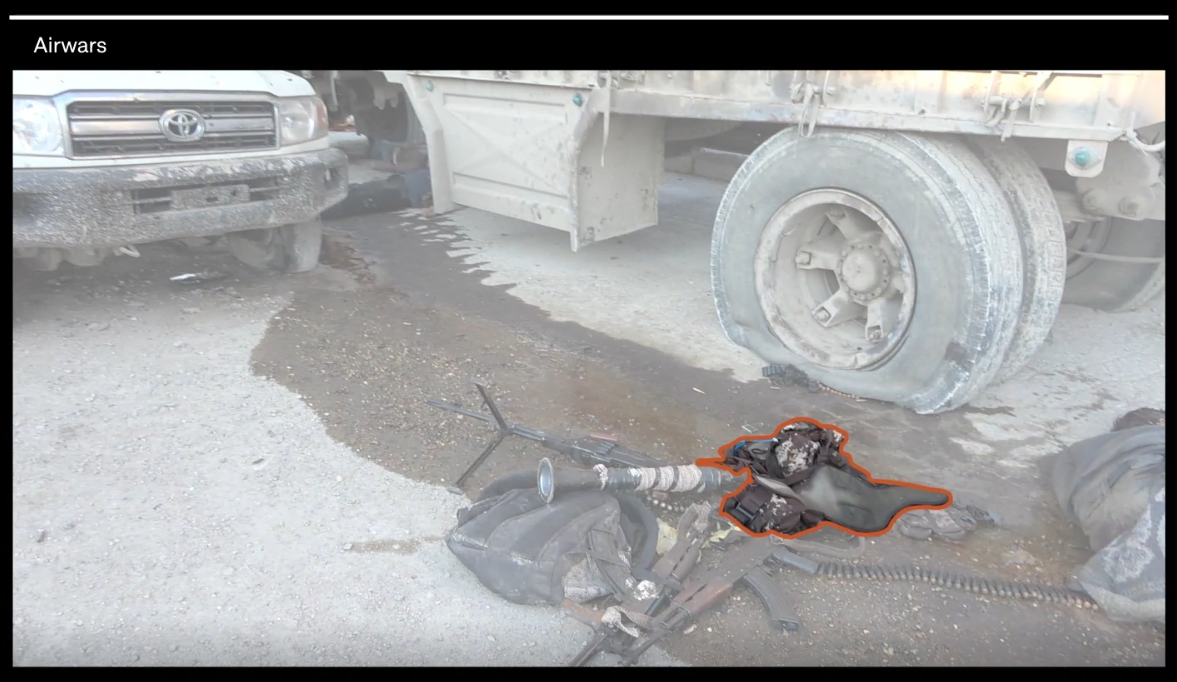 While the SDF continues to maintain that there were hundreds of attackers from outside the prison, Airwars analysed images released at the time (such as of the suicide vests used by attackers) and reviewed reports of explosions in the surrounding areas after the attack. In total the evidence suggests the number of attackers was likely only a few dozen.

The documentary is the first part of our investigative series into the prison break, with additional findings to be released in the coming months.

The full documentary can be seen here (US only).