Two months had passed since Libyans first took to the streets. Hundreds were dead as government forces and Nato-backed rebels fought a brutal conflict, but in a hotel room 2,000 miles away the warring sides agreed a secret deal to end the war.

The confidential Norwegian-brokered talks – full details of which are being revealed exclusively by The Independent on the tenth anniversary of the Nato bombing campaign – were the closest the world came to a peaceful end to Libya’s 2011 civil war.

The two sides agreed to a draft text stating that Muammar Gaddafi, who had ruled Libya for 42 years, would step down and leave politics, but keep the institutions of state in place.

In the end the talks fell apart and rebels, with Nato’s support, ultimately captured and killed Gaddafi. More than 1,000 civilians were killed during the war, according to new research by the civilian casualty monitor Airwars.

In the decade since Libya has been embroiled in perpetual conflict, with the country eventually becoming the second largest base for Isis. This week an interim unity government was sworn in, the latest political attempt to stem violence in the country.

In his first interview with international media regarding the 2011 negotiations, the then Norwegian foreign minister Jonas Store, who brokered the deal, accused France and Britain of opposing a negotiated solution. 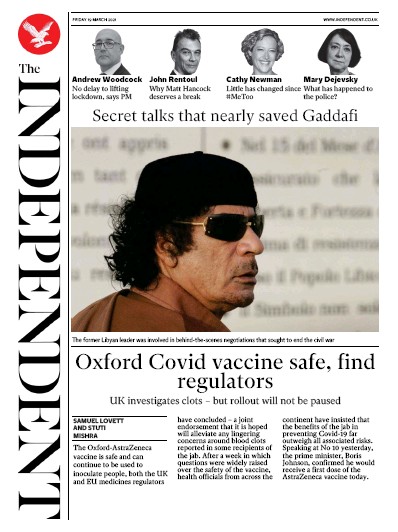 The Independent front page on March 19, 2021 featuring an Airwars investigation

Read the full story at The Independent.