Who killed Ahmed and Youssef?

Investigation suggests a PKK bomb, rather than the Turkish military, may have killed two Iraqi holidaymakers in Kurdish region

On August 22nd 2021, security forces in the Kurdish region of Iraq came across a battered white Kia Sportage at the side of the road. In it, they found the bodies of two men.

Ahmed Shukr, 40, and Youssef Omar, 26, from the city of Mosul, were on holiday in the mountainous Darkar region of Zakho district, a popular retreat for domestic tourists seeking to escape the sweltering summer heat. They had been reported missing two days earlier.

While a place of leisure and relaxation for some, Iraqi Kurdistan is also in the midst of an ongoing conflict between the Turkish armed forces and the Kurdistan Workers’ Party (PKK), a Marxist militant group that calls for greater autonomy and increased rights for Kurds within Turkey. Seeking to crush the group, Turkish forces have expanded into parts of northern Iraq, backed by air and artillery strikes. Dozens of civilians have been killed in the fighting, with thousands displaced.

Almost all local sources attributed the men’s deaths last August to either a Turkish air, drone or artillery strike. At the scene Omer Jalal, a relative, told Rudaw: “You are in your own country and it is safe, but you get bombed by the Turks…. Where is our government?”.

Yet an Airwars investigation piecing together the final moments of the two men’s lives has found they were most likely killed by a roadside bomb, possibly planted by the PKK. One of the first such instances of civilians killed by such munitions in Iraqi Kurdistan, it could indicate a dangerous trend for those living in or visiting these conflict-affected areas.

The investigation also reveals how the spread of the conflict has resulted in a sharp rise of reported civilian harm in the Darkar region.

On the morning of August 20th, Shukr and Omar apparently set off from their resort, keen to explore the rugged mountains.

At the outskirts of the village of Sharanish, the men took a turn, seemingly unaware they were entering a militarized area known locally as the “Red” or “Forbidden” zone. In recent years Turkey has set up military bases in areas previously largely unaffected by the conflict, including the area around Sharanish.

Farhad Mahmood, the mayor of Batifa sub-district, said that Iraqi border guards who had been manning a roadside checkpoint in the area mistook the tourist for locals and waved them through. Moments later that error proved fatal.

An explosion hit the car, which ultimately crashed into a rock. Local media alleged it had been hit by Turkish artillery fire or possibly a drone strike. “A Turkish artillery shell fell near their car,” a security source in the predominantly Kurdish area told the Shafaq News Agency.

But later that day a video, published by local media outlet Kurdistan 24, emerged that challenged the prevailing narrative.

It appeared to show a car driving along a rural road when an explosion rocks it. The car then drives out of shot.

The first challenge was to locate the strike and check whether the video showed the same explosion that killed the men. 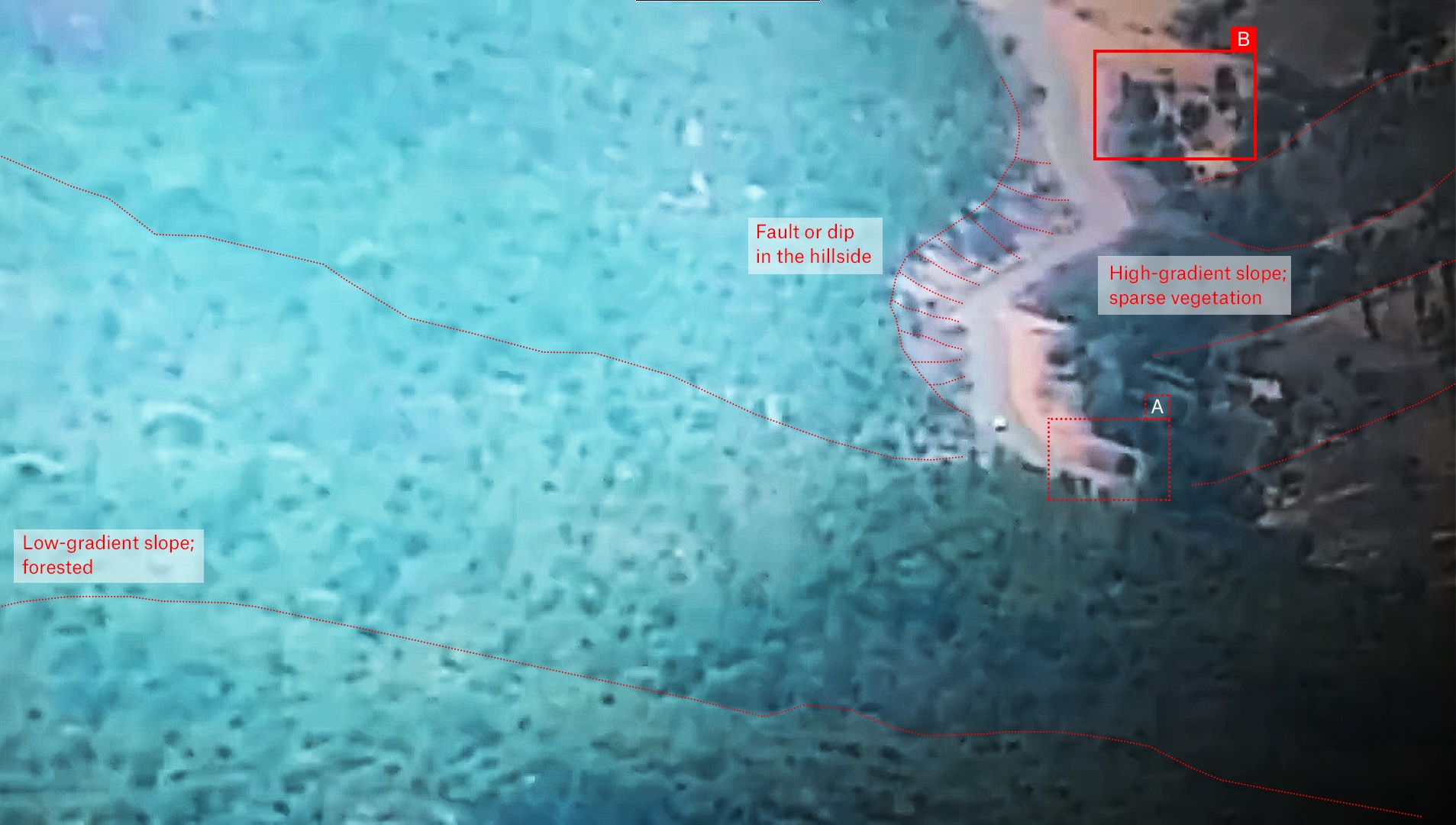 A still image from the video of the explosion

The road appeared to be in the base of a valley. A steep sparsely-vegetated hillside is visible to the right, while a low gradient heavily forested slope can be seen on the left. In addition to the distinctive contours of the road, an earthen bank runs along its left side. A structure is visible in the top right of the frame, indicated by a solid red box and the letter B. A cylindrical structure, seen closer to the vehicle, is indicated by a dashed red box and the letter A.

Having first identified features within the frame, finding the location using satellite imagery is considerably easier if you know where these features are in relation to one another (i.e north, south, east or west).

The fact it was sunny on the day the video was filmed helped with this process.

The size and orientation of the shadows generated by the explosion helped to identify both the approximate time of day, and the direction the car was traveling in.

After the explosion there is a dust plume perhaps 50 metres high, which generates a shadow shorter than its height – indicating the sun is high in the sky and therefore that the incident occurred around noon. Since the shadow appears to the right of the plume – and Iraq being in the northern hemisphere where at noon shadows orient north – this led to the conclusion the car was traveling from west to east. 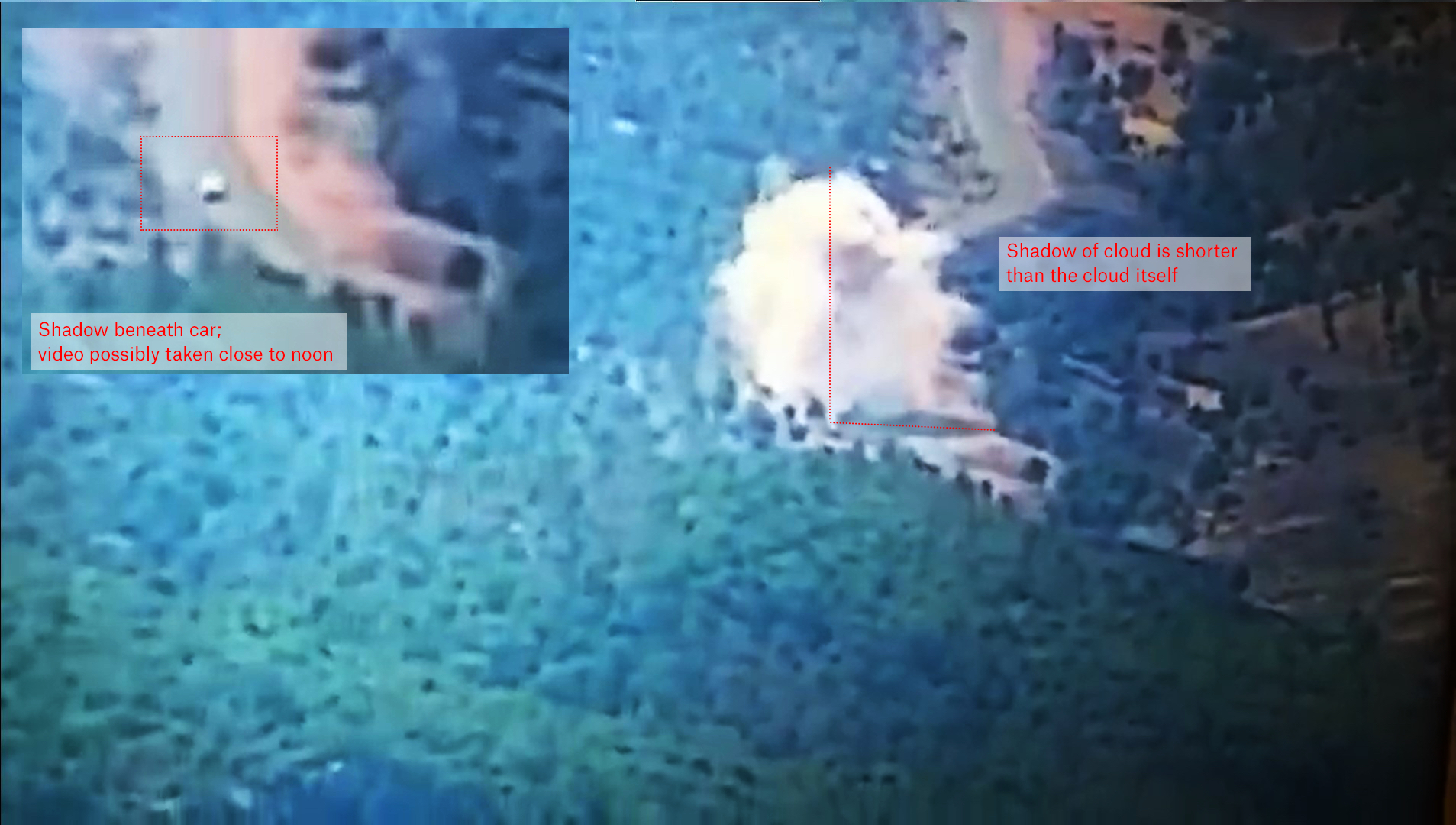 Reports indicated the incident occurred close to the village of Banke. Using this information Airwars’ geolocation team was able to identify the below location as the site of the explosion. Structure B, seen in the video and highlighted in image 1, is also visible in satellite imagery. Structure A appears to have been built after ​​November 2019, the date of the most recent, high-quality, publicly available satellite imagery of the area. From this, we are able to determine that the men were driving west to east on a stretch of road between the villages of Sharanish and Banke. 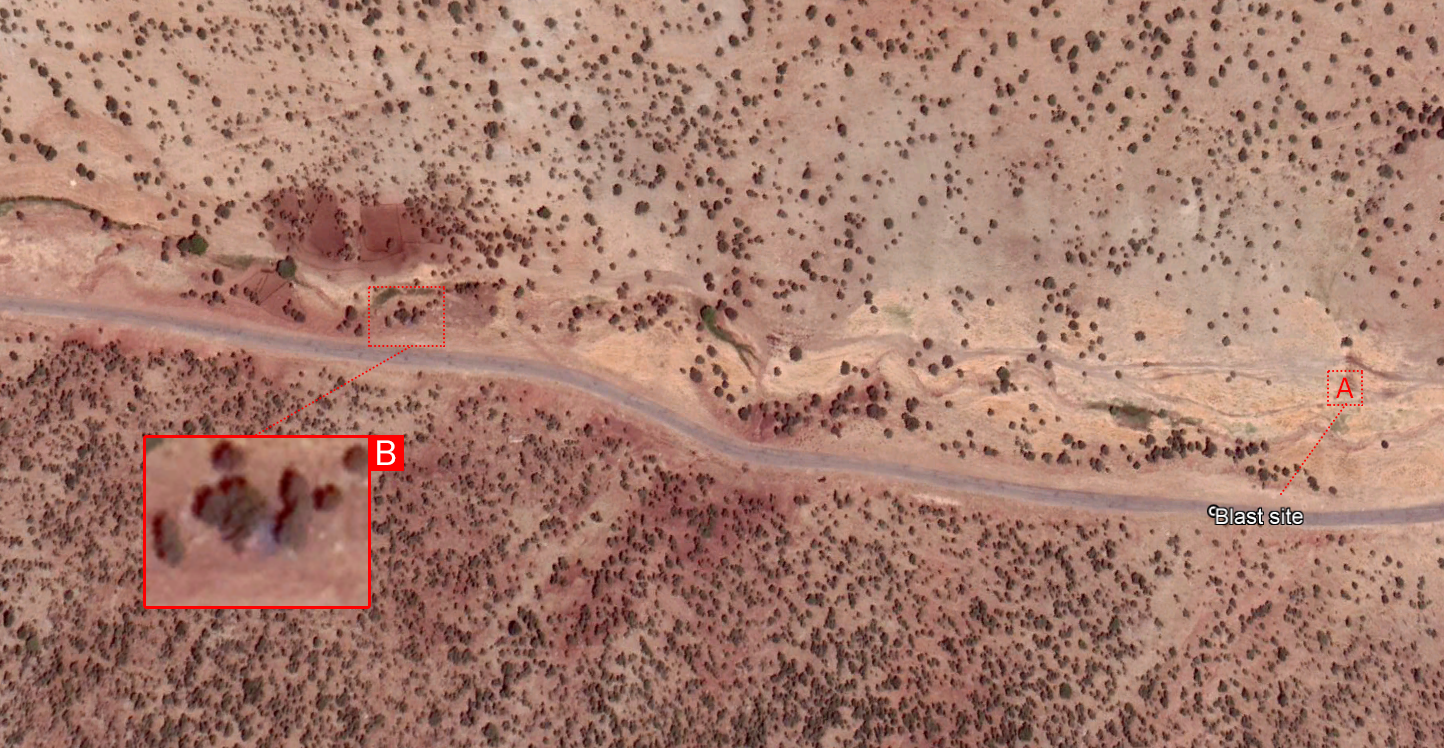 Using Google Earth, we were then able to locate images of first responders loading the bodies of the two men into an ambulance. 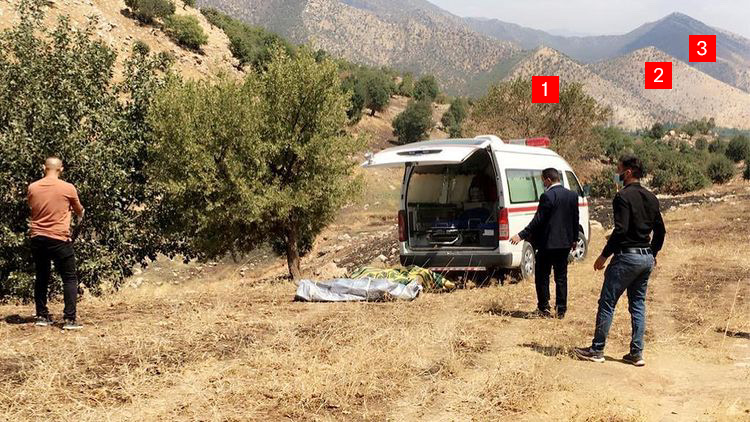 An image of the men’s bodies being loaded into an ambulance. Image courtesy of Kurdistan 24. 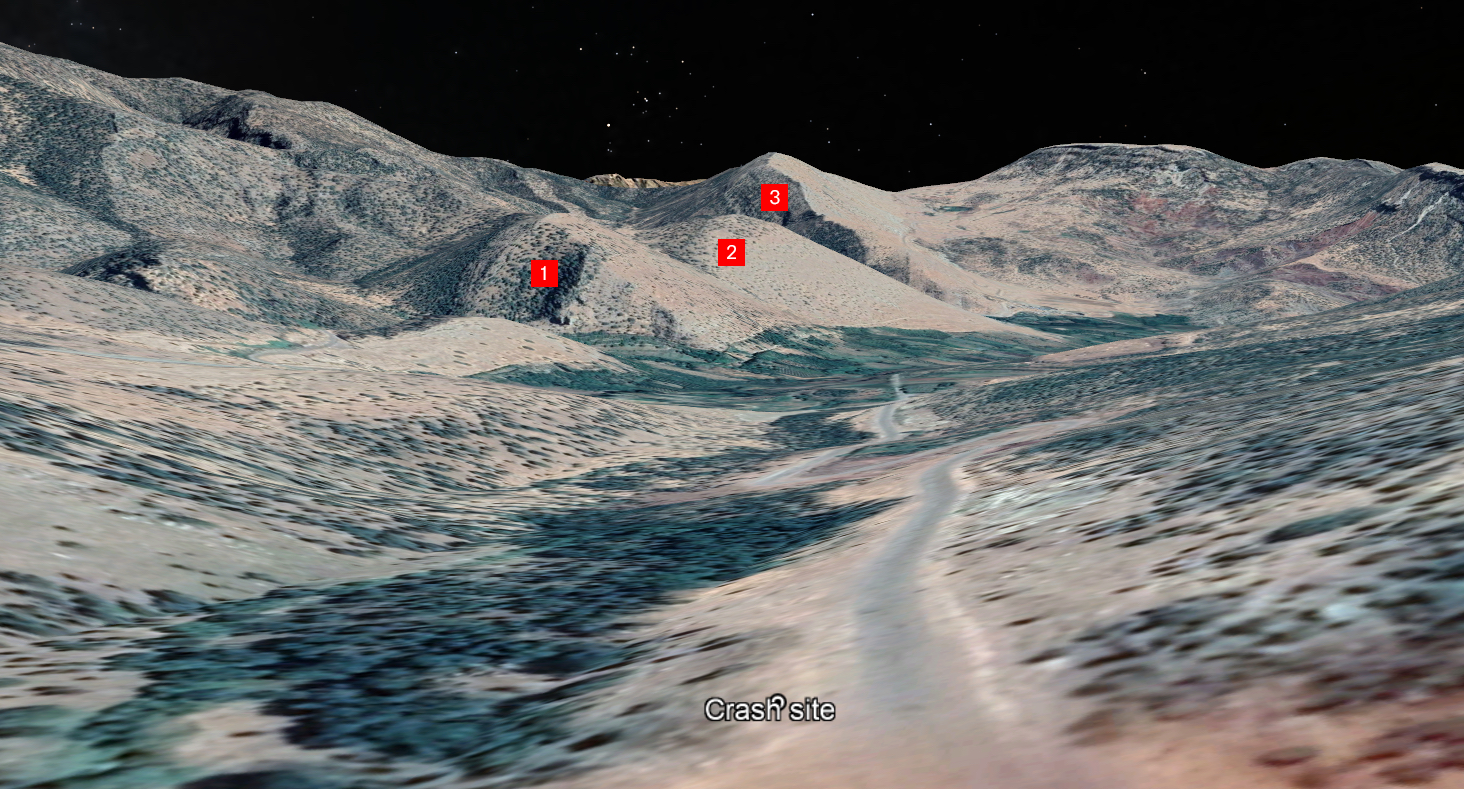 The location is 500 metres from the strike, suggesting the car drove on, likely as the wounded driver attempted to keep it on the road, before eventually crashing. 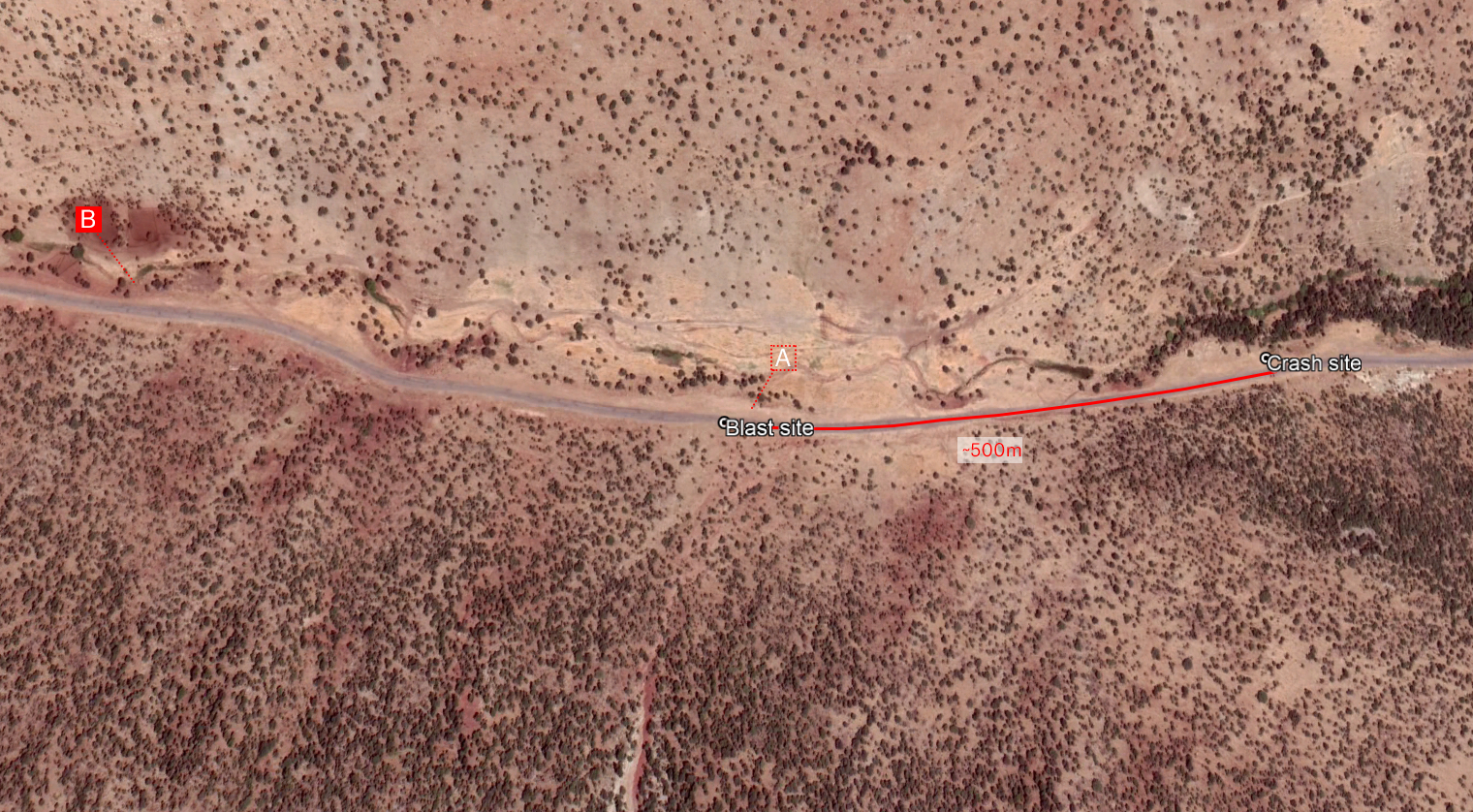 An image of the men’s bodies being loaded into an ambulance suggested their vehicle continued down the road for a further 500m before crashing. 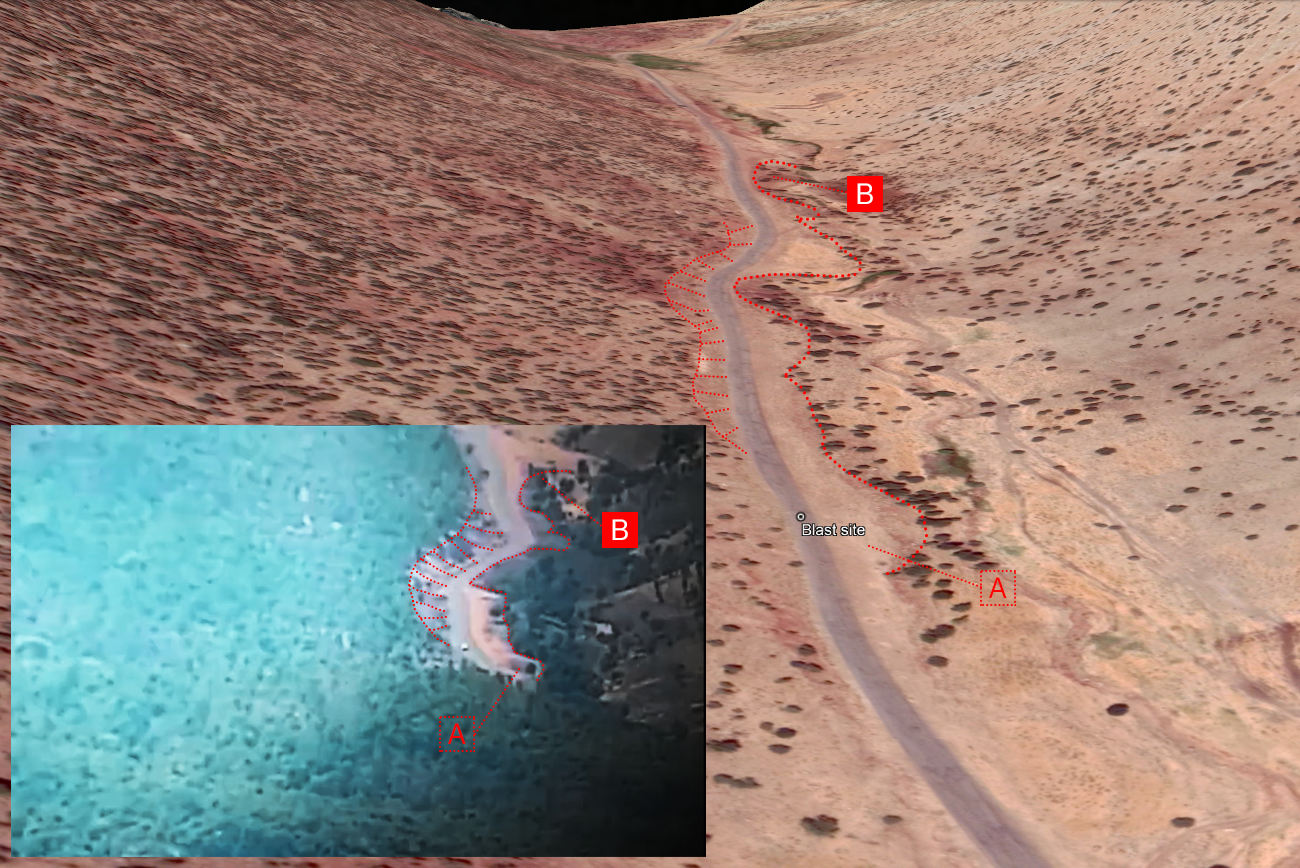 A side-by-side comparison of the video and the location highlighted by Airwars.

Having verified that the video very likely showed the explosion that killed Shukr and Omar, the question became what photographs and video could reveal about the strike.

Chris Cobb Smith, a munitions expert and former Major in the British Army, said it was very unlikely to have been artillery fire from a nearby Turkish base. “Artillery is notoriously inaccurate and would seldom be used to engage a target like this,” he said. 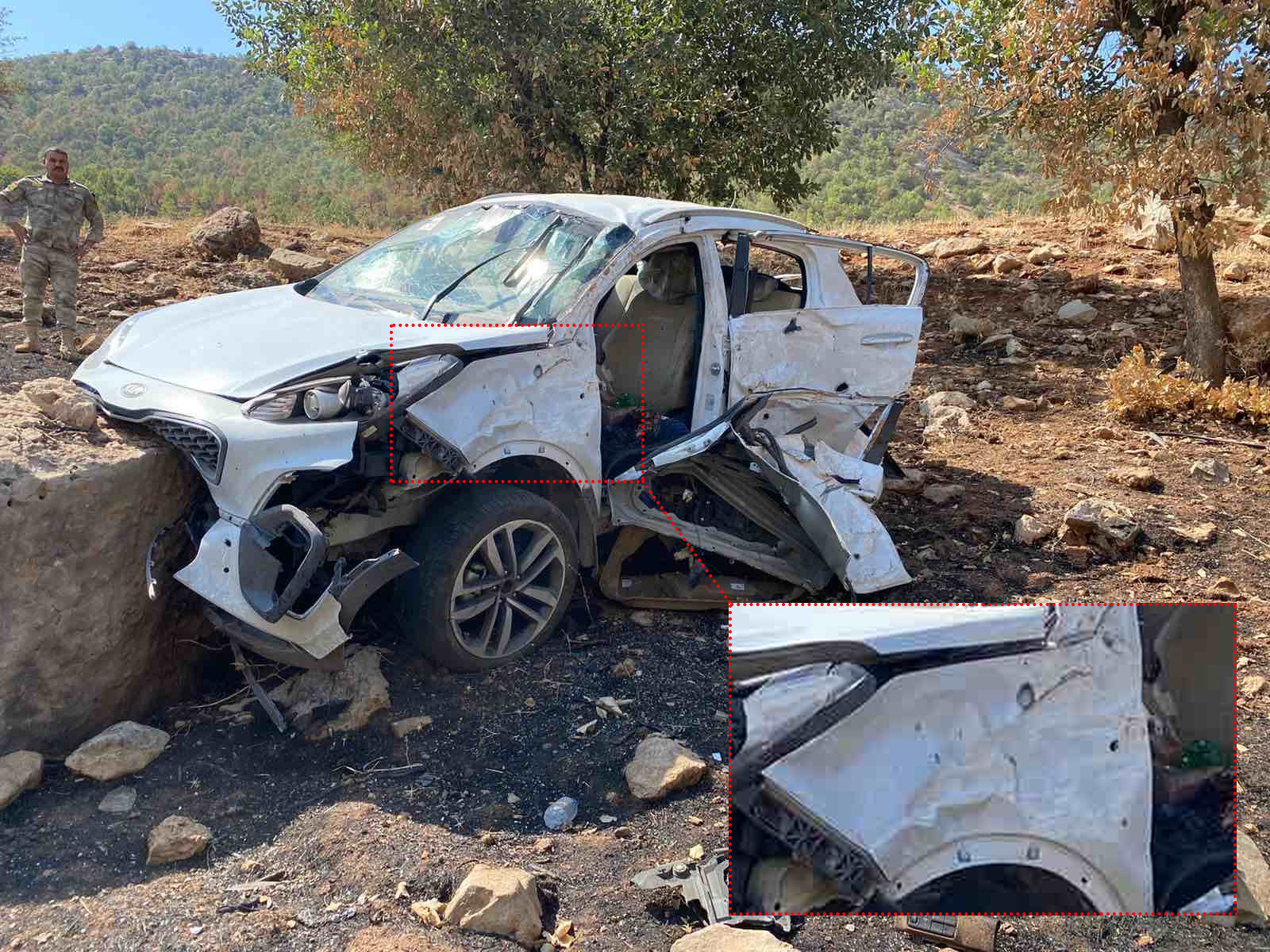 Contortion to the bodywork of the car seemed to have been caused primarily by the force of the blast. Image courtesy of Kurdistan 24.

He noted that artillery strikes would typically result in the location, or in this case the car (below), being pockmarked by shrapnel, but there was very little evidence of this visible on its bodywork. Instead, the crumpling and contortion to the bodywork seemed to have been caused primarily by the blast effect.

Roger Davies, a former British Army ammunition specialist with decades of experience analysing explosions from both conventional munitions and improvised devices, said he was “95 percent certain this is an IED strike.” 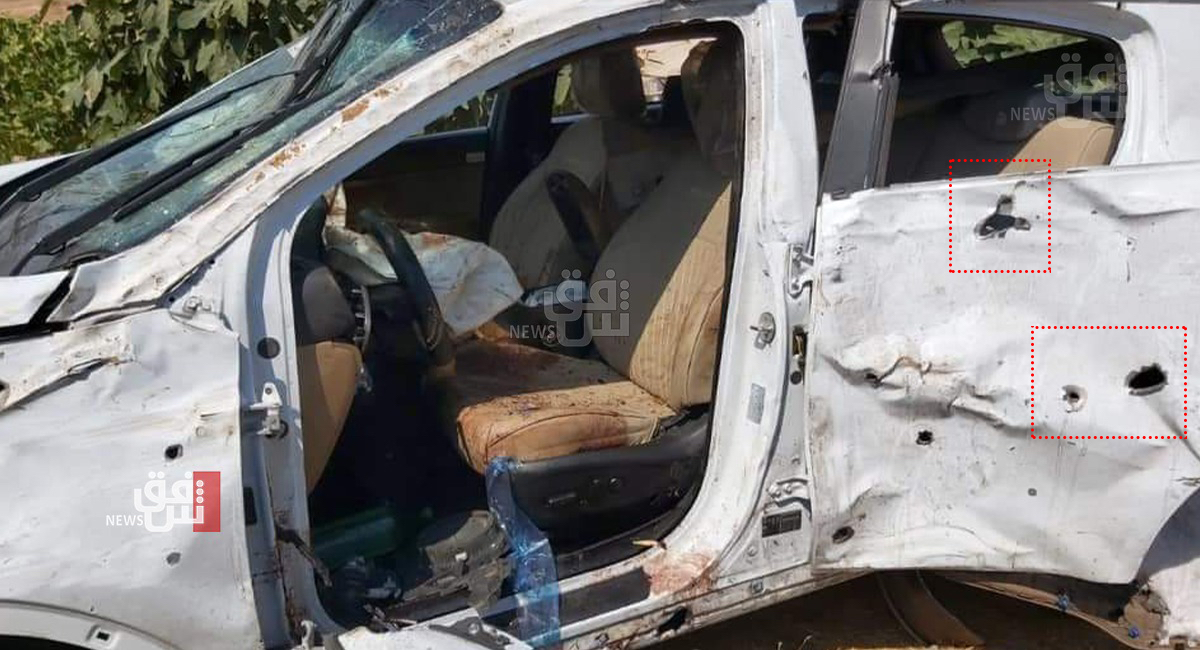 A view of the side of the vehicle closest to the blast. Image courtesy of Shafaq News Agency

“The fragmentation damage could have been caused by a small amount of shrapnel, or by a metal container used to house the bomb, or stones and rubble thrown upwards by the force of the explosion, but it is not consistent with an artillery round,” said Mr. Davies.

Mr. Davies said the video and photographs suggested an IED weighing in the order of 5kg, likely initiated by a radio signal and laid above ground, a tactic commonly employed by those who want to limit the time they spend installing a device, “especially if they suspect they are under observation.” 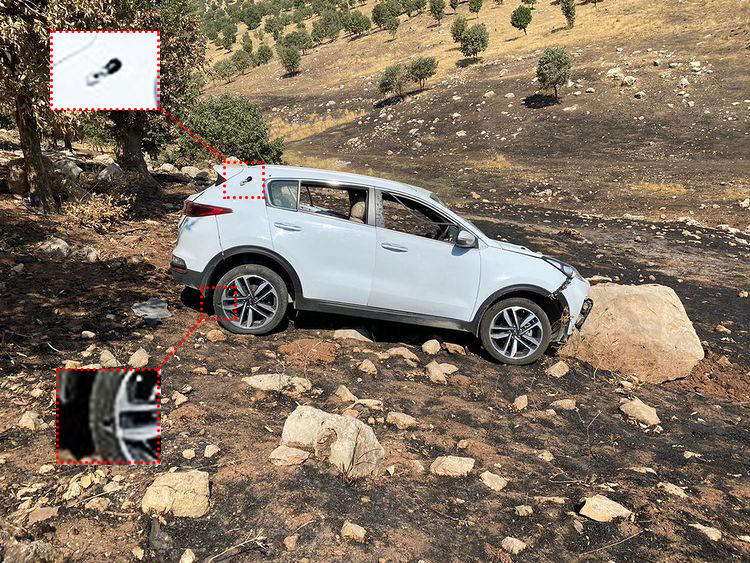 Experts would have expected to see more widespread fragmentation damage to both sides of the vehicle in the event of a conventional munition strike. Image courtesy of Kurdistan 24.

Due to the colour of the smoke given off by the blast, TNT – a carbon-rich explosive commonly used in conventional munitions – was ruled out as a possible charge.

Questioned as to whether the car may have been targeted by a guided munition, Mr. Davies said he thought it unlikely, as neither the damage to the vehicle nor video footage showed evidence of such a strike.

A cursory look at nearby mountains reveals why so many of the sources may have implicated Turkey in the strike, and why whoever planted the bomb may have chosen the location.

In the latter half of 2020, the area witnessed a significant military build-up, one that forced many local residents to flee.

In May 2021 resident, Ali Mahmoud, told Rudaw: “It’s (the Darkar area) on the main street. It’s a tourist place… people come and go and the situation was very calm… Two months ago the Turkish army and PKK ruined our situation.”

A suspected Turkish military position is seen before, and after, construction. (Images via: Sentinel hub.)

The arrival of Turkish troops in the area may suggest they were the intended target.

On November 4th 2020, one member of the Iraqi Kurdish security forces was killed and two others wounded when IEDs struck their vehicles in Chamanke sub-district in Dohuk. The People’s Defense Forces (HPG), the PKK’s military wing, accepted responsibility for the strike after it said government forces encroached on their self proclaimed area of operation. The attack resulted in condemnation of the PKK from the US, France and the federal Iraqi government.

Despite this, reported civilian harm in Iraq stemming from PKK IED strikes has remained low.

An escalation in reported civilian harm

Whether the deaths of Ahmed and Youssef were caused by an IED or some other action, it’s clear that risks continue for civilians in the region. Over the course of 2021, Airwars recorded four instances of civilian harm in the Darkar area, resulting in two civilian deaths and four injuries, a dramatic increase in comparison to previous years.

Prior to the base’s construction, Airwars had recorded just one incident of reported civilian harm in Batifa sub-district over the course of six years of monitoring – an alleged Turkish artillery strike that injured four civilians in 2017.

Airwars’ investigation into the events of August 20th suggests that Ahmed Shukr and Youssef Omar were killed by a roadside IED rather than by a Turkish military attack, as was widely reported at the time. While no party has claimed responsibility for the attack, suspicion may point to members of the Kurdistan Workers’ Party (PKK) in a case of mistaken identity.

Data collected by Airwars also shows how a military build-up in the area resulted in a significant rise in reported civilian harm. In the past year, up to 36 civilians have been killed by alleged Turkish military actions inside Iraqi Kurdistan.

As the conflict spreads into more populated areas, there is a potential for the use of such IEDs to become a more commonplace feature of the conflict in northern Iraq, greatly increasing the threat already posed to civilians.

In the short term, the spread of the conflict has had far wider implications in terms of displacement. In a recent report by PBS News, a local official claimed that 24 out of 26 villages in Darkar have been emptied by fighting in the past two years.