Dutch F-16s will resume their part in the Coalition’s air war against ISIS on January 1st. Yet while other members of the US-led Coalition have maintained or improved transparency and accountability, the Netherlands has always refused publicly to share any information on the date, location and targets of its airstrikes. Airwars director Chris Woods was one of five speakers invited to a November 29th Dutch parliamentary hearing on civilian casualties in the fight against ISIS.

Official munitions data suggests that during its previous engagement against ISIS, the Netherlands may have been the fourth most active member of the Coalition, after the US, UK and France. Yet a near-complete lack of public transparency and accountability means that almost nothing is known about any Dutch airstrikes between October 2014 and July 2016 – when more than 500 civilian casualty events were alleged.

Strikes are set to resume on January 1st when close ally Belgium steps down. Yet defence officials have indicated that there are no plans to improve on the Netherlands’ notoriously-poor public transparency record – citing fears for the personal security of military personnel.

An updated Airwars graphic which measures transparency among all remaining Coalition belligerents shows the Netherlands to be far below all other allies when it comes to saying where, when or what is bombed, the committee was told. 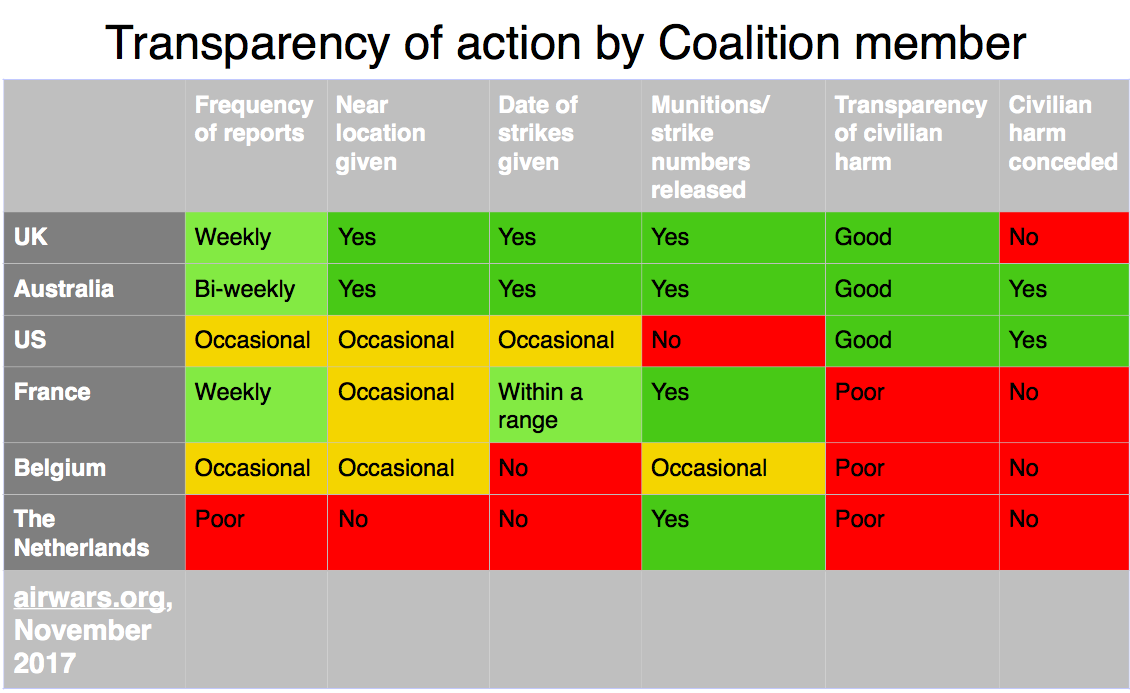 An updated Airwars graphic makes clear how far behind other allies the Netherlands is when it comes to public accountability in Iraq and Syria.

During the parliamentary hearing – which featured MPs from most political parties – Han ten Broeke, MP for the conservative-liberal VVD, challenged Airwars by pointing out that certain details about Dutch airstrikes are in fact being shared. However, such information is only provided to MPs in closed committee sessions which cannot be publicly discussed. Some MPs have complained privately that they are unable to check Dutch military claims against the public record, as could be done with British or Canadian strikes for example.

Dutch investigative journalist Sinan Can, who recently met with civilian victims in Iraq,  stressed the importance of public transparency during his own testimony, citing his experiences working on a recent documentary in East Mosul. “It was almost impossible to conduct in-depth research. […] I would like to know where and how many civilians were killed. A little more transparency would build trust. It would enable us [journalists] to explain what happened to the people in Mosul”, Can told MPs.

Independent journalist Jannie Schipper, who in July broke a story on the possible involvement of the Netherlands in an airstrike on January 26th 2015, also addressed MPs. Schipper told the personal story of Ebtehal Mohammed Yosef (26) and Mohammed Mohammed Ahmed (29), who both barely survived the incident.

The account poignantly answered a question of Martijn van Helvert, MP for the Christian-democratic CDA, who asked why Iraqis and Syrians do not simply leave ISIS-held territory when it is being bombed. Schipper said that Yosef and Ahmed had left Mosul in a convoy of six taxis, but were bombed twice on their way to Baghdad.

Wilbert van der Zeijden, senior researcher at human rights organisation PAX, indicated during the hearing that the Coalition risks losing sight of its original stated goal: “ISIS has almost been defeated, but the factors that brought it to power are still in place,” he warned.

According to Van der Zeijden’s policy brief, the military campaign often hasn’t protected civilians, nor has it led to stability in the region. In fact, it has at times done quite the opposite. In both Iraq and Syria the lack of a clear political post-ISIS strategy may lead to a new conflict. Instability, insecurity and a power vacuum were exactly the circumstances ISIS had initially profited from.

‘Without facts there is no justice’

MPs were told that despite the high reported number of civilian casualties, the assumption at Airwars is that most of the Iraqis and Syrians harmed in Coalition actions are not unlawfully killed. Even so, with so many foreign and local powers bombing in Iraq and Syria, relatives are entitled to understand who was responsible for specific actions.

That was a key reason why Professor Liesbeth Zegveld said she had decided to represent Yosef and Ahmed – making her the first lawyer in any Coalition country to take specific action on behalf of those affected by airstrikes.

Airwars director Chris Woods concluded his own remarks by calling on the Dutch government to take a different stance on publicly sharing essential airstrike information: “Does the Netherlands really want to be remembered as the least transparent and accountable member of the Coalition?”

However a number of MPs at the hearing stressed that Dutch concerns regarding the safety of military personnel were very real – and were keen to hear from the panelists how other Coalition allies managed transparency issues.