Greater accountability and transparency is required in the US-led Coalition’s handling of civilian casualties, according to a major report published by Airwars on December 12th.

Limited Accountability: a transparency audit of the Coalition air war against so-called Islamic State, commissioned by the Remote Control Project, finds systematic failings among all Coalition militaries to properly count the civilian toll of the air campaign.

Airwars’ analysis of the monitoring, assessing and investigation of civilian casualty allegations across Coalition partners shows that processes have been opaque and ad hoc, lacking the common rules and procedures required for baseline public reporting.

The benefits of transparency: a breakdown by nation

Canada, the UK, the United States and France have consistently been the more transparent. In contrast, six other nations – Australia, Bahrain, Saudi Arabia and Belgium, along with Jordan and the Netherlands – have issued extremely limited information on their military actions.

These findings were also borne out by a transparency case study of a sample month of the anti-ISIL campaign. For July 2016, Airwars initially examined all published records of active Coalition partners to see which may have been involved in any particular casualty event. It then reached out to individual ministries of defence for further information to gain more clarity on each nation’s actions in Iraq and Syria during the month. In some instances, this meant that certain countries could be discounted as having been involved in civilian casualty allegations.

Strong engagement from the United States and the United Kingdom led to the opening of seven new investigations. Belgium, Australia and Denmark, however, would not engage on specific civilian casualty allegations; as a result their role in certain civilian casualty events remained unresolved – even if they were in fact not involved.

Improved transparency would not only bring these nations considerable strategic and tactical benefits, but also safeguard their reputation, distinguishing them from other belligerents, such as Russia, and reinforcing their claim that they place a premium on the preservation of civilian lives. However, no Coalition member besides the US has admitted to killing a single civilian in over two years of war. 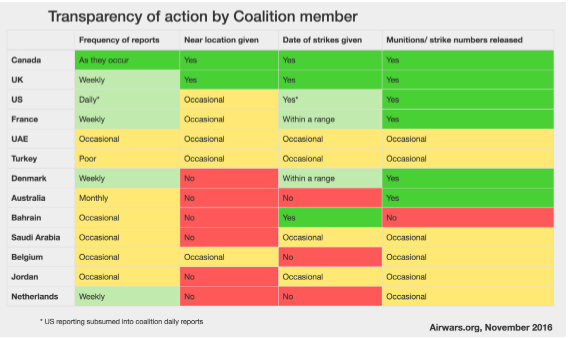 The current system: inconsistent and unrigorous

Airwars found that current investigations into alleged civilian casualty events are frequently concluded too quickly, with a declassified CENTCOM document published in September 2015 showing that most claims were dismissed within 24 to 48 hours.

Conversely, by July 2016 it was taking 173 days on average from the Coalition killing a civilian in the battlefield, to its publicly admitting that fact.

Timely public reporting by every participating nation on the ongoing air campaign of both the date and vicinity of all airstrikes is essential – along with a prompt disclosure of any investigation findings at both national and Coalition level.

Moreover, the present system for assessing civilian casualties is too reliant upon internal air-only assessment, and as such risks leading to an under reporting of civilian casualty deaths.

Across the 14,200 US-led Coalition airstrikes in Iraq and Syria in the first two years of the air campaign (to July 31st 2016) officials insist  just 152 non-combatants died in these same actions – one fatality per 93 airstrikes. In stark contrast, Airwars monitoring indicates that at least 1,500 non-combatants died as a result of Coalition actions during this period.

The Coalition had admitted to having caused only 173 civilian fatalities to November 2016, an unprecedentedly low number for recent airpower conflicts.

While self-reporting by pilots has identified civilian casualty cases, similar weight is not currently given to credible external casualty monitors such as Iraq Body Count and the Syrian Network for Human Rights. Although some nations – the US, UK and Canada – have engaged directly with casualty monitors and NGOs, more consistent engagement is required at both national and Coalition level.

In summary, only by establishing a standardised, rigorous and transparent civilian casualty investigatory process can the US and its Coalition allies pay a significant role in reducing harm to non-combatants on the ground.

Signs of improvement and the Trump administration

There have, however, been positive indications of a change in approach. CENTCOM’s active engagement with Airwars on this report and subsequent steps towards improving its civilian casualty monitoring is most encouraging – as is its increased willingness to work with external monitoring agencies.

More notably still, President Obama’s July 2016 Executive Order on Civilian Casualties appears to have led to key developments in US monitoring and reporting of non-combatant deaths from its actions.

Airwars now urges the incoming Trump administration to build upon this process by retaining the Executive Order, and hopes that it will see the continued strategic and tactical benefits of US forces minimising harm to non-combatants on the battlefield.

The Airwars report, written by director Chris Woods, was commissioned by defence think tank the Remote Control Project. The audit was launched in Brussels at the Open Society European Policy Institute – attended by a number of militaries participating in the war against ISIL.