April 2014 Update: US covert actions in Pakistan, Yemen and Somalia 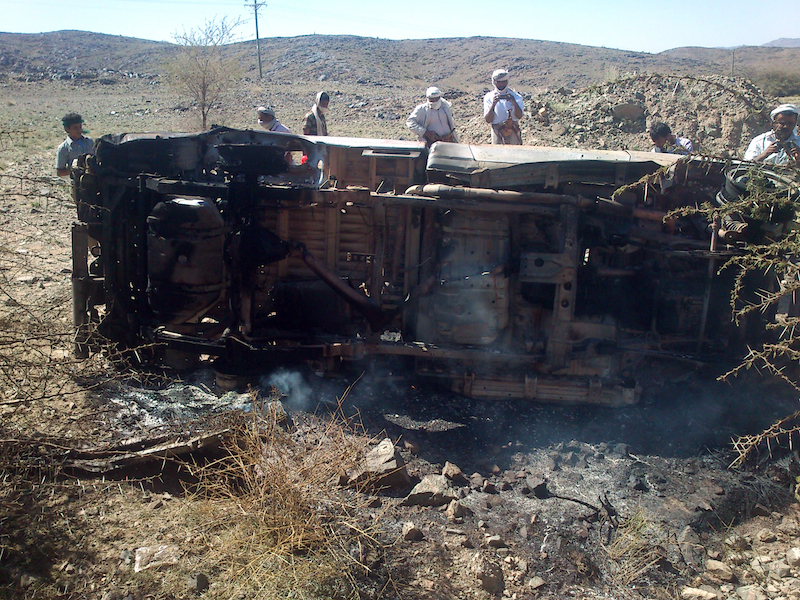 The wreckage of a four-wheel drive destroyed by CIA drones in Yemen (EPA/stringer).

More than four months without a drone strike in Pakistan.

US drones and special forces launch barrage of attacks in Yemen.

The Bureau has added more than 100 names to its Naming the Dead project since launch.

Total killed in strikes in April: 0

It is now more than four months since the last reported drone strike in Pakistan. This is reportedly to allow peace talks to take place between the Pakistan Taliban (TTP) and the government.

While drone attacks have stopped, there have been reports of sightings of unmanned aircraft over Miranshah, North Waziristan and Hangu, beyond Pakistan’s tribal areas, indicating that CIA surveillance may be continuing.

The pause in drone strikes has been welcomed by senior Pakistani military officers, according to Owen Bennett-Jones, who recently visited Waziristan and described the trip for the Bureau’s drones podcast.

It was reported that the US drone strikes in Pakistan are carried out by US Air Force (USAF) personnel, under the direction of the CIA. The strikes are carried out by the USAF 17th Reconnaissance Squadron based at Creech Air Force Base in Nevada. The CIA manages the operations but the drones are operated by military crews. Former USAF drone operator Brandon Bryant said: ‘The CIA might be the customer but the air force has always flown it. A CIA label is just an excuse to not have to give up any information. That is all it has ever been.’

A ceasefire between the TTP and the government in Islamabad broke down this month, although both sides have said they want the peace talks to continue. There was a dramatic drop in militant attacks over the first quarter of 2014, according to research organisation the Conflict Monitoring Center. But attacks continued in April, including some before the ceasefire was officially dropped. Policemen and civilians were among those killed in various militant attacks. The Pakistan Air Force (PAF) jets reportedly killed at least 35 people including eight civilians in strikes on Khyber agency.

The US Senate Intelligence Committee dropped a provision from a major intelligence bill that would require the White House to publish yearly drone strike casualty figures. Director of National Intelligence James Clapper wrote to the committee saying that the administration is exploring ways to be more transparent about US drone strikes.

Clapper wrote: ‘To be meaningful to the public, any report including the [casualty] information… would require context and be drafted carefully.’

A separate bipartisan bill, also aiming to compel the White House to publish drone strike casualty figures, was put before Congress this month. The independent analysis firm GovTrack gives the bill a negligible chance of passing the committee stage.

Former Australian prime minister Malcolm Fraser said intelligence provided by Australian spies to the CIA could expose Australian spies to prosecution if it is used to target drone strikes in Pakistan. He said intelligence officers working at Pine Gap, a joint Australian-US listening station in central Australia, could be vulnerable to charges of crimes against humanity. Last year an investigation by the Sydney Morning Herald revealed that Pine Gap intercepts mobile phone and radio traffic in Pakistan’s tribal region to identify and track targets for drone strikes in both Afghanistan and Pakistan.

Total reported killed in US operations: 37–55

Civilians reported killed in US strikes: 4-10

At least 40 people were killed in a blitz of attacks on Yemen between April 19-20. At least five civilians were reportedly among the dead, including children aged 14 and 16.

CIA drones destroyed a truck carrying alleged militants during the night of April 19, killing at least 10 people. However, a nearby vehicle was also caught in the blast. At least three labourers were killed by flying shrapnel. Up to six other civilians were wounded; they were taken to a nearby hospital where the Yemeni government reportedly paid for their treatment.

CIA drones and Yemen Air Force jets, possibly with support from US warships, killed at least 24 people on April 20. A 14-year-old boy was among the dead from a massive strike on an alleged Al Qaeda in the Arabian Peninsula (AQAP) camp.

On the night of April 20 a further operation left three to four people dead. US and Yemeni special forces ambushed a car travelling through the southern Shabwa province. A 16-year-old boy was reportedly killed in the attack.

AQAP’s master bomb-maker Ibrahim al Asiri and the group’s leader Nasser al Wuhayshi were initially reportedly killed in this strike. However unnamed US officials said they were not the targets of the operation. And it subsequently emerged that DNA tests showed they were not among the dead.

Al Wuhayshi appeared in a widely publicised video with dozens of fighters in late March, reportedly filmed in the same area as the second strike. In the video al Wuhayshi tells the fighters: ‘We should remember that we fight the biggest enemy. We must overthrow the leaders of infidelity and remove the cross and its holder, America.’

After the strikes, Yemen’s armed forces, backed by local militia, began an offensive to ‘purge‘ AQAP from the districts in the southern provinces of Abyan and Shabwa. The militant group established a foothold in Abyan in 2011, spurring the US and Yemeni governments to launch a bloody offensive in 2012. One area the military has said it will focus on is al Mahfed in Abyan – a frequent target of US attacks. Every strike on Abyan since January 2013 has hit in the al Mahfed area, according to Bureau data.

It also emerged this month that two Westerners, described as AQAP ‘foot soldiers’, were killed in a US attack in November 2013. Christopher Harvard, 27, was an Australian citizen who had travelled to Yemen purportedly to teach English. The Australian foreign ministry confirmed his death in the operation. A dual Australian and New Zealand national initially identified as Muslim bin John also died, the New Zealand prime minister confirmed. He was later identified as Daryl Jones – he had reportedly been travelling in the Middle East since mid-2012. Two Yemenis and an Egyptian were also killed in the attack.

Meanwhile, a federal US court of appeal said the government must release its legal justification for killing US citizens abroad in drone strikes. The unanimous decision is in response to a Freedom of Information request by the American Civil Liberties Union seeking government records about the deaths of Anwar al Awlaki, his 16-year-old son Abdulrahman and Samir Khan – three US citizens killed in Yemen in 2011.

There are no reported US attacks in Somalia in April, though ‘foreign Special Forces’ and US drones supported an offensive by African Union peacekeepers, according to AFP.

Sierra Leone sent a battalion of soldiers to join Amisom this month – the fifth state to contribute personnel. Kenya has had troops in the south of Somalia for three years, which are now part of the Amisom force. An investigation by a Kenyan newspaper revealed the strain the three-year occupation of Somalia is putting on its armed forces.

Despite losing ground to Amisom, al Shabaab again launched attacks in Mogadishu, the capital. The militants shot dead a Somali lawmaker less than 24 hours after killing another Somali MP with a car bomb.

The militant group also issued a bloodthirsty video message to the world this month, declaring: ‘We will blow you up, until we finish you off.’

A French citizen and a Briton were shot dead as they arrived in Galkayo. The men were employed by the United Nations Office on Drugs and Crime. Al Shabaab did not claim the attack, though they did celebrate the foreign workers’ death.

Also this month, Kenya continued to crack down on ethnic Somalis living in the country, reportedly detaining 3,000 and expelling dozens.

Dutch journalists revealed the Netherlands has been intercepting vast amounts of Somali telephone traffic and sharing it with US intelligence – although the Dutch government denied involvement in US drone strikes.

The Bureau has now added more than 100 names to the Naming the Dead database since the project launched in September 2013. Over 50 of the new names have come from Bureau research in Pakistan, while the others have emerged from media reports of drone strikes.