States edged closer to a political declaration on the use of explosive weapons in populated areas on April 8th, after three days of crunch talks in Geneva.

More than 65 states descended on the Swiss city for key talks on the wording of a political declaration that advocates believe would save thousands of lives by restricting the use of wide area effect explosive weapons in populated areas (EWIPA). Detractors, such as the United States government, argue it would unfairly limit the freedom of their own military actions and have threatened not to sign.

While no final text was agreed upon Friday, all sides struck an optimistic tone at the end of the three-day meet – saying a deal was nearer than ever. Delegates will meet again for one day in two months before an adoption ceremony expected in the summer.

“There are clearly differences of opinion but we have seen a very positive, solution oriented approach,” the chairperson, Ambassador Michael Gaffey of Ireland, said. “We are not simply working on a formula of words in a political declaration –  we want to make a real difference and impact on the ground and foster behavioural change.”

The talks were given additional urgency by the ongoing war in Ukraine, and Russia’s extensive use of explosive weapons on its cities. Moscow did not attend the talks.

Even the United States, widely viewed as one of the most hostile states to a declaration with teeth, struck a more positive tone than in previous meets. “There are still tough drafting issues and decisions ahead, and we have to get them right. The US delegation pledges our goodwill, to help to get to a positive outcome. We look forward to doing so.”

Since 2018, Ireland has chaired consultations on the use of explosive weapons in populated areas. In the sessions since, the need for such a declaration – which is not legally binding and so does not create new legal obligations – has only become clearer.

“The draft declaration text holds the potential to make a meaningful contribution to the protection of civilians, and negotiations over the past few days have overall been constructive,” Laura Boillot of INEW, a network of NGOs pushing for the protocol, told Airwars.

“But decisions will now need to be made if the final text is going to have humanitarian effect. Most importantly it needs to establish a presumption against the use of explosive weapons with wide area effects in towns, cities and other populated areas.”

It will be a failure to leave this room agreeing that simply restating existing laws will reduce civilian harm – a failure for all of us who came here with the intention to reduce that harm in the first place." @alma_osta in HI concluding remarks at #EWIPA negotiations today. pic.twitter.com/pTKpgfqWWU

Civil society groups and international agencies made a strong case for restricting EWIPA.

During three days of focused talks, several key fissures bubbled. While states in attendance – and civil society organisations – repeatedly emphasised the shared desire to produce a tangible and meaningful political declaration that could help save civilian lives on the ground, the practicalities of the process made clear that good intentions weren’t going to be enough.

On the first day of the informal consultations on April 6th, states made general remarks – affirming their support for the proceedings as well as their national positions – after an introductory statement from Ireland, the penholder.

In these general remarks, most states tended towards re-affirming the positions they had made clear in previous negotiations. On the hawkish side, the UK, US, Israel and Canada all emphasized that their positions as militarily active states meant that they would not sign a declaration in its current form, which included strong language about avoiding the use of explosive weapons in urban areas. Throughout the week, the delegates from these countries could often be seen meeting as a bloc outside of formal proceedings.

Many of the sticking points that emerged on the first day continued to dominate both the main floor and side conversations. The predominant line of argument was between those who argued that the declaration needed only to reaffirm the importance of international humanitarian law and provide further guidance about how to do so in this context; and those who asserted that this declaration needed to strengthen existing commitments and add new ones for states around the use of explosive weapons.

The second day of discussions took a more technical turn, with the majority of interventions focused on the wording of specific clauses and paragraphs of the text.

Clause 3.3, which attracted much attention in previous consultations, was once  again hotly debated. It is one of the first clauses in Section B, the operative section – which lays out the actions that states have to comply with if they choose to sign onto the declaration.

In the current draft, Clause 3.3 says states must: “Ensure that our armed forces adopt and implement a range of policies and practices to avoid civilian harm, including by restricting or refraining from the use of explosive weapons with wide area effects in populated areas, when the effects may be expected to extend beyond a military objective.”

The bulk of the discussion around this clause was on the second sentence, as many states intervened on the use of “restricting or refraining,” with some suggesting it was strong enough while others lobbied instead for the use of “avoid”.

A split between the majority of civil society organisations and militarily-powerful states was apparent during these parts of the discussions, with NGOs and international agencies pushing for stronger language, rather than trying to place limits on what kinds of civilian harm would be protected under this new declaration.

Airwars’ incoming director and current head of research Emily Tripp also made an intervention – emphasising how crucial it was for states to actually track civilian harm. 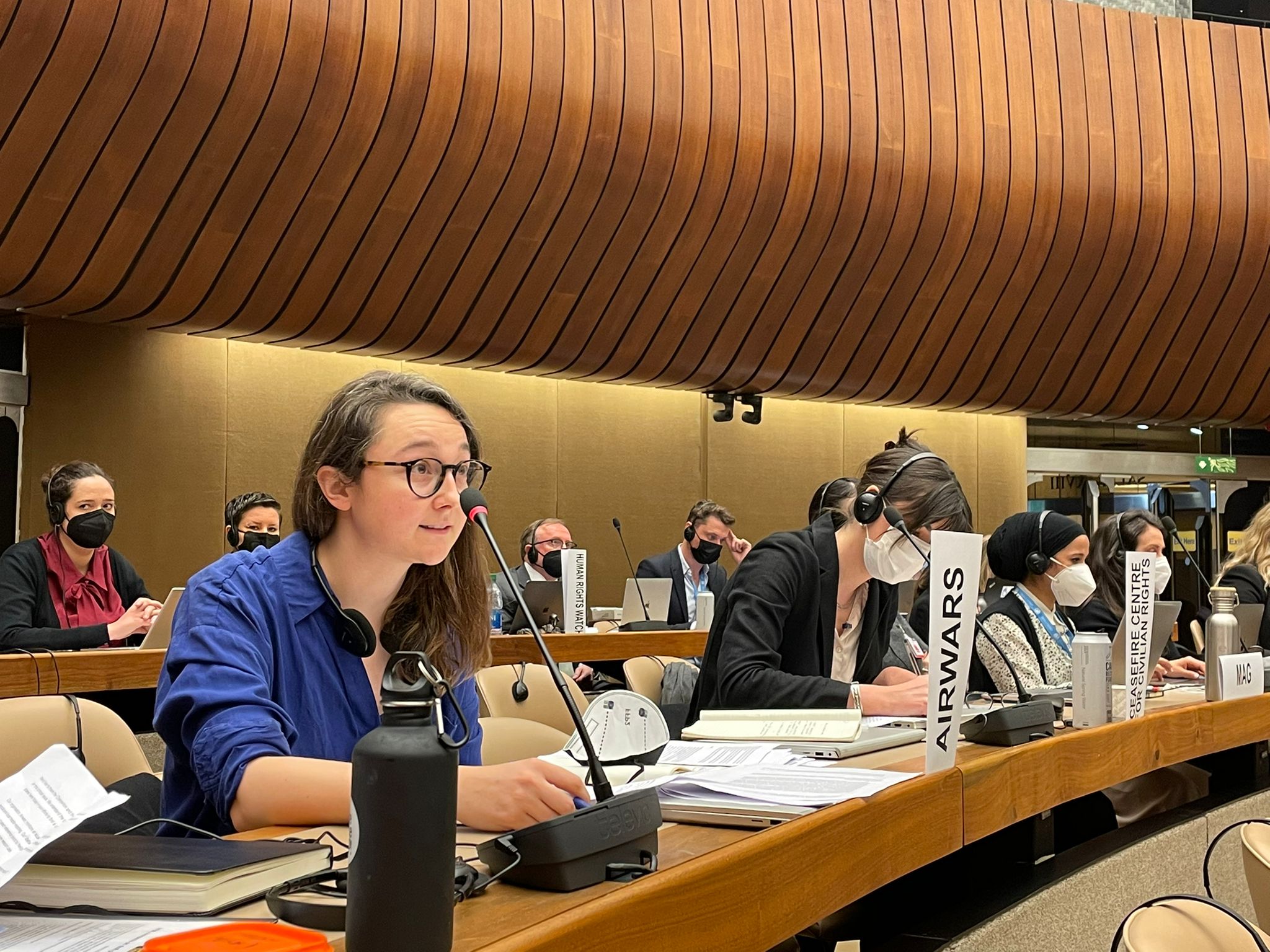 At the end of day two INEW, one of the organisers, named nine states – Belgium, Canada, Denmark, Israel, the Republic of Korea, Sweden, Turkey, the United Kingdom and the United States – that it said had “worked to weaken declaration provisions.” The UK delegation, for example, agreed that tracking civilian harm was a ‘moral obligation,’ but then highlighted ways in which it claimed this was not feasible – arguing that live hostilities made it near impossible to monitor casualties properly.

But INEW also said that there had been a “shift in the collective tone set by states since the last round of negotiations, with more governments explicitly committed to strengthening the protection of civilians through the declaration.”

The statement said this was likely as a response to the bombing of Ukrainian towns and cities, and the Ukraine crisis loomed large over the conflict. Not only did the majority of states open their remarks with condemnation of the Russian aggression in Ukraine, many also emphasised the importance of a meaningful political declaration with specific reference to Ukrainian cities and towns such as Mariupol, Bucha and Khrarkiv.

There was also an emphasis on the value of protecting civilian objects and infrastructure, such as schools and hospitals, with states such as Mexico and the delegate for the Holy See (which holds observer state) urging specific language around the need to protect hospitals, blood transfusion centres, and environmental and religious sites.

Speaking at the end of the latest talks, Ambassador Gaffey said Ireland and organisers would review the submissions from all parties before a month or two of further work on the text. He said states and NGOs would then hold a final one-day consultation in a couple of months, before a political adoption ceremony where states would declare their support for the text.

As Alma Taslidžan Al-Osta, of Humanity and Inclusion, noted in her own concluding remarks to delegates: “Eleven years in Syria, seven years in Yemen and over a month in Ukraine have taught us that explosive weapons with wide area effects should not be used in towns, cities and populated areas. The status quo is no longer an option.”

Civilians increasingly bear the brunt of modern conflicts. Addressing the devastating harm to civilians from Explosive Weapons in Populated Areas is a priority for 🇮🇪. We welcome states, international organisations and civil society to consultations in Geneva this week #EWIPA pic.twitter.com/pAyglwZO9D