August 2012 update: US covert actions in Pakistan, Yemen and Somalia

Pakistan: August sees the highest number of CIA strikes in Pakistan since October 2011. A number of senior militants are killed along with at least two named civilians.

Yemen: At least 26 people are killed in five confirmed US drone strikes in Yemen. This is still less than the May peak. Civilian casualties are confirmed for the first time since May.

Somalia: For the fourth month no US military actions are reported in Somalia. In related news, three Ugandan helicopters crash-land prior to an anticipated assault on militant-held Kismayo.

Total killed in strikes in August: 29-65, of whom at least 2 were reportedly civilians

The CIA launched seven drone strikes in August, the highest recorded in any month since October 2011. The rate of strikes has continued to rise through the year. 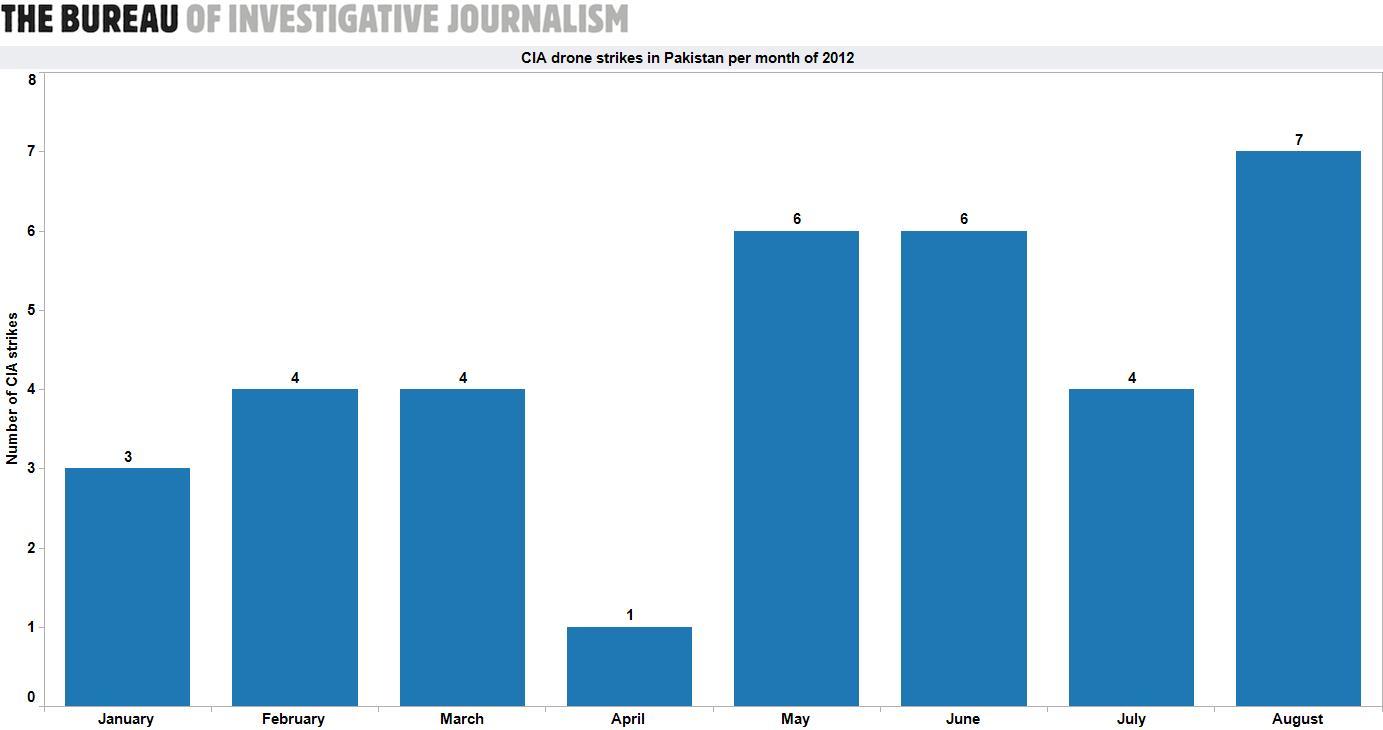 Total CIA drone strikes in Pakistan, per month of 2012.

All seven attacks happened after Ramadan. Neither the CIA nor the Taliban seem to change their tactics in the month of fasting and the festival of Eid al Fitr. The Bureau’s data shows that since President Obama came to office there has been no let-up in the tempo of strikes during Ramadan and Eid. A CIA drone strike has never taken place on either Christmas or Easter Day.

The August barrage of strikes culminated with three coordinated attacks on August 24 that killed 13-18 people including several named militants, according to the Bureau’s field researchers. Four named Turkistani militants died along with three named members of the Pakistan Taliban (TTP).

For the first time in some months there were confirmed reports of civilian casualties in Pakistan. On August 18 the wife of Ahsan Aziz, a Kashmiri militant, died in a strike alongside her husband. Thirteen-year-old Osama Haqqani also reportedly died on August 21.  As many as 25 others died with the teenager, including his father Badruddin Haqqani, the third-in-command of the Haqqani Network. These were the first known names of civilians reported killed since October 31 2001, although other civilians have been reported killed in this period.

Pakistan responded to the onslaught of strikes by continuing with its vocal protests, calling in a senior US diplomat for an official reprimand. Washington in turn insisted that Islamabad pressure the Haqqani Network to stop cross-border attacks on Isaf and Afghan forces.

Of which possible additional US drone strikes: 57-66

Five of the six strikes in August were confirmed as US attacks by a variety of Yemeni officials.

The focus of US attacks has now moved to Hadramout in the eastern part of Yemen. Five strikes hit targets in the arid province, bearing out reports that al Qaeda has taken refuge there. This is a shift from Abyan province where most of the attacks occurred in July. Yemeni security forces and local militia drove the militants from their ‘Islamic Emirate’ in Abyan earlier this year.

The first named civilian casualties were reported since Red Cross worker Hussein Saleh was killed on June 20 in a possible US airstrike. Policeman Walid Abdullah Bin Ali Jaber and Salem Ahmed bin Ali Jaber, a mosque imam, were killed in a house in the eastern Hadramout province when a nearby car carrying alleged militants was destroyed.

While drone strikes seem to have plateaued, al Qaeda and its ally Ansar al Sharia have continued with their bloody insurgency against the government. In the most deadly attack this month, a suicide bomber targeted a funeral wake in Jaar where more than 150 people had gathered to mourn a local sheikh. His militia had first fought alongside al Qaeda in Abyan before siding with the government. At least 50 people were killed by shrapnel from the blast.

August was the fourth consecutive month in which there have been no reports of US strikes. Concerns remain that covert operations continue in the country, in support of African Union Mission in Somalia (Amisom) peacekeepers fighting al Shabaab.

In related news, in the build-up to Amisom’s long-touted advance on militant-held Kismayo, the UN allowed Uganda to dispatch air support for the assaulting troops. Catastrophically all but one of four helicopters sent by Kampala crashed into a Kenyan mountain. The losses cast doubt on the military capacity of African nations engaged in Somalia, and their ability to have carried out any of the 10 strikes recorded by the Bureau since 2007 that are not confirmed as US operations.

Kismayo is the last deep-water port in al Shabaab’s hands. Its fall could prove decisive in the battle with the militants in the south. The assault was intended to start before August 20, the day of long-awaited parliamentary elections. However those elections dragged on into the final week of August when a parliamentary speaker was finally voted in. This has cleared the way for parliament to choose a president and for the eight year life of the Transitional Federal Government to end.

Other conflicts: Israel and Egypt

The US and Israel are the only countries known to have carried out targeted killings with drones, with the Israeli Defence Force (IDF) reported to have carried out a strike as early as 2004. Until now all known Israeli strikes have been within Gaza.  On August 26 Ibrahim Owida Nasser Madan was killed in an explosion as he rode his motorbike through Egypt’s Sinai desert. It was later reported by Israeli media that Madan had died in an Israeli drone strike up to 15km inside Egypt. Both the IDF and Egyptian military denied the claims.