David Cameron has called for those carrying out covert drone strikes ‘to act in accordance with international law’ and to take ‘all feasible precautions to avoid civilian casualties.’

However the British prime minister has carefully avoided any direct criticism of the US, Britain’s closest military ally.

Mepham had previously urged Cameron to explain ‘your government’s position on the Obama administration’s policy and practice of targeted killings.’ He asked the prime minister:

Do you agree that their approach is legal and appropriate? … If you disagree with US administration policy on targeted killings, have you or will you be raising your concerns with President Obama and others in the administration?

Perhaps most sensitively, Mepham had called on Cameron to ‘clarify your government’s policy on the sharing of intelligence with the US on terrorism suspects, which might then be used to carry out drone attacks?’ 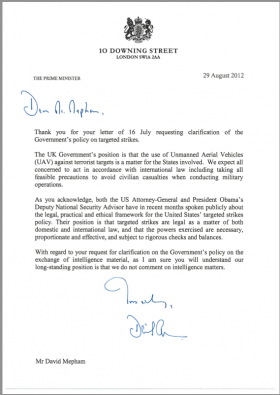 That last question is a potential tinderbox for the British government. An ongoing High Court case alleges that UK security services have provided intelligence to the United States which has been used in targeted killings in Pakistan and elsewhere.  Such killings – by drone or otherwise – are understood to be illegal under British and European law.

Earlier this week the UK’s former Director of Public Prosecutions (Lord) Ken MacDonald told the London Times that ‘the evidence is pretty compelling that we are providing that kind of information to the Americans.’

The Times also reported claims that UK intelligence is often pooled with that of other countries and held on a common database, possibly allowing the UK government to claim that it had no control over how such information was used.

After the deaths of a number of its own citizens at the hands of the CIA, Germany’s intelligence services halted the sharing of information with US spy agencies if that data might be used in a drone strike. The UK operates no such policy.

Chris Cole, a critic of drone militarization who runs the website Drone Wars UK, told the Bureau: ‘The British government’s argument appears to be that it is not responsible for what is done with its intelligence once shared with the US. That’s like handing bullets to an armed robber whose gun is empty, but denying you’re responsible for what happens.’

In his letter David Cameron refused to say whether US and UK intelligence services have co-operated in covert drone killings, saying only that ‘as I am sure you will understand our long-standing position is that we do not comment on intelligence matters.’

The prime minister also refused to be drawn into criticising the US, Britain’s closest military and political ally. Instead Cameron noted that ‘the UK government’s position is that the use of unmanned aerial vehicles (UAVs) against terrorist targets is a matter for the States involved.’

The prime minister did note, however, that the British government ‘expect all concerned to act in accordance with international law including taking all feasible precautions to avoid civilian casualties when conducting military operations.’

Research by the Bureau has consistently shown that US claims of ‘zero civilian casualties’ in Pakistan are untrue. Although reported deaths of women and children have declined sharply since August 2010, any civilian males killed by the CIA in the tribal areas are considered to be terrorists, according to a New York Times investigation.

Bureau monitoring of US civilian casualty estimates supports this claim, indicating that no military aged males (aged 18-65) are being reclassified as civilian by the CIA, even when their non-combatant status is posthumously revealed.

Tom Watson MP told the Bureau that it was ‘simply not acceptable’ that Cameron had failed to clarify the UK’s position on targeted killing by drone strike, as Human Rights Watch had called for.

The senior Labour backbencher added that ‘considering the UK’s domestic and international human rights commitments, one would have expected the government to confirm the illegality of the use of such methods and approaches outside the conventional battlefield.’