The US has admitted that its forces and those of three key anti-ISIL Coalition allies – the UK, Australia and Denmark – took part in bombings that mistakenly killed at least 15 Syrian regime forces on September 17th near Deir Ezzor.

In a briefing with reporters on November 29th, chief investigator Brigadier General Richard Coe said that after initially determining incorrectly that a vehicle being tracked belonged to ISIL, “confirmation bias” and other failures led Coalition analysts to assume that additional forces seen being friendly to the vehicle’s occupants also belonged to the militant group.

Drone surveillance had begun a day earlier on September 16th, and continued until the strikes commenced at 13:55 local time. One analyst viewing video of the scene remotely – noting the presence of a tank in the vicinity – wrote in a military chat room that “What we are looking at can’t possibly be ISIL.” But his assessment was ignored.

According to an investigation conducted by CENTCOM, shortly before the raid began “a possible flag was called out” in the target area. But “the call went unacknowledged due to human factors, to include task saturation and target fixation.” In other words, Coalition personnel were too busy, and too focused on a target that they had already decided was ISIL.

The US took the unprecedented step of notifying the Russian government prior to the impending attack, but provided incorrect coordinates. This led Russian officials to believe the target was in fact several kilometers distant.

As soon as Russia learnt its Syrian allies were in trouble it used a special ‘deconfliction hotline’ manned by American personnel. But it took almost half an hour for the message to get through. According to US investigators, the Russians wanted to speak with a specific liaison officer – and when he was unavailable they reportedly hung up and called back later. When the official was still unavailable during the second call, Russia was put on hold.

A total of 27 minutes would pass before the Coalition was finally warned and was able to take steps to halt the raid. During that time, multiple additional strikes took place.

In total, Coalition planes belonging to the US, the UK, Australia and Denmark dropped 34 guided bombs and fired 380 additional rounds of 30mm munitions on the Syrian camp. F-16s, A-10s, FA/18s and Reaper drones were all involved in the raid.

Though CENTCOM did not provide breakdowns of the 37 total “strikes” or munition releases by country, Denmark has publicly stated that it dropped five bombs on four vehicles during the raid.

A spokesperson for the UK Ministry of Defense told Airwars that its remotely piloted Reaper drones also fired munitions, adding that “We would not and did not intentionally strike known Syrian Regime military units.”

And in a statement, the Australian Department of Defence said that two of its FA/18As took part in the raid, which was supervised by the Combined Air Operations Center (CAOC) in Qatar. Australia stressed that the airstrikes “were conducted in full compliance with the rules of engagement and the laws of armed conflict.”

The three US allies have made much until now of their accuracy in the war against ISIL, claiming to have killed or injured no civilians despite more than 1,800 airstrikes between them.

According to a brief and heavily redacted summary of the CENTCOM investigation, for those at the CAOC on September 17th it had been “unclear who had the responsibility/authority to decide between continuing deliberate target development versus conducting a dynamic strike.” Investigators warned that though the complex raid had been botched on this occasion, “it is likely that this type of targeting will become increasingly common.”

Brig. General Coe said that CENTCOM was able to substantiate 15 deaths on the ground, but believed more Syrian forces were likely killed. While US investigators claimed that the individuals targeted were not in regular military uniforms, they did accept that the troops killed were allied to President Bashir’s forces.

Others have placed the death toll far higher than 15. The Syrian Observatory for Human Rights reported that 90 died, while Russian officials said 62 were killed in the raid. Media outlets close to the regime named 47 personnel, including 12 senior officers.

However, there are indications that at least some of the named victims had in fact died in previous incidents.

As first reported by Zaman al Wasl, named officers couldn’t possibly have been in Deir Ezzor on September 17th. Airwars monitoring of press reports and social media dating back to 2014 also suggests that each officer named in pro-regime accounts had been reported as killed at other times during the war in Syria.

A June 30th, 2015 post by the Syrian Revolution Network indicated that Major General Soheil Ibrahim Oran had died that month. His death was also reported by a pro-regime Facebook account.

Major-General Yasin Abdo Maala was originally reported killed in May 2015 and a mourning notice published that summer. Colonel Talib Khair-Bik, the third officer listed by regime-allied websites, had been reported killed in Deir Ezzor in early 2015. Airwars researchers were able to find death reports or memorials (often on Facebook) for all of the nine other officers initially listed as killed in the Coalition strikes.

Zaman al Wasli also reported that several infantry soldiers listed as being killed in the September 17th raid had appeared in earlier coverage indicating their deaths in battle. Researchers at Airwars  were unable to confirm widespread patterns among the non-officers listed on regime-connected website. 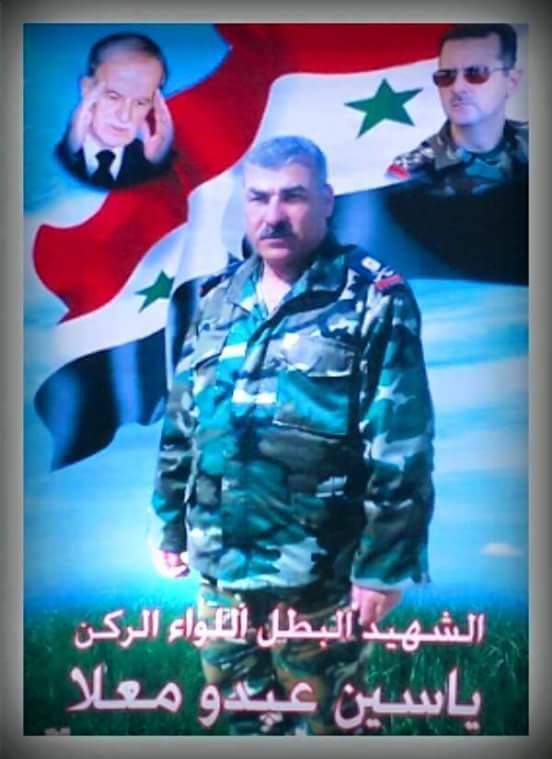 Major General Yassin Abdo Maala, who actually died in May 2015 (Picture via All 4 Syria)

In a statement, CENTCOM identified the following “lessons learned and areas for improvement in the targeting process:”

*       A recommended review of the hybrid targeting process used in the strike – a mixture of the days- or weeks-long “deliberate targeting” process, and the accelerated process generally used for fast-emerging “dynamic targets.”  Harrigian has already ordered such a review.

*       Improved information sharing among analysts to guard against the human factors that led to the strike.

*       A more effective lessons-learned process in the CAOC to better avoid repeating mistakes.

*       Enhanced use of the U.S.-Russia safety de-confliction hotline established under the two nations’ Flight Safety Memorandum of Understanding, to ensure that critical information is communicated more quickly to available personnel.

The Deir Ezzor incident is the second ‘friendly force’ event so far confirmed by the Coalition. In December 2015, at least nine and as many as 23 Iraqi soldiers died when they were mistakenly bombed near Fallujah.