“After a few months, it turned out that it had indeed been a wrong target. An error had been made in the intelligence process. Instead of being an ISIS target, it turned out to just be a house. A mix-up in targets. You think: shit, it’s not possible, is it? I felt sick when I heard about it. Terrible, yes. I feel co-responsible. I launched that bomb and pressed the button. I ended the lives of people who had nothing to do with the war. That is a very particular experience. It’s a slap in your face. It goes against everything you are there for. You are there to help the Iraqi people.”

Dutch F-16 pilot ‘Stefan’, describing his role in a deadly Mosul airstrike in 2015 which killed four family members. Translation of an excerpt from the book Missie F-16 by Olof van Joolen and Silvan Schoonhoven (2019, Nieuw Amsterdam)

Dutch F-16s conducted hundreds of airstrikes against the terror group ISIS in Iraq and Syria between 2014 and 2018. Yet the Netherlands has been one of the least transparent countries when it comes to possible civilian casualties from US-led Coalition actions.

Part of the reason for that Dutch secrecy has been an insistence that pilots and their families must be protected from retaliation – and until now the community has been tight, with almost no outside access. Now De Telegraaf journalists Olof van Joolen and Silvan Schoonhoven have managed to speak with Dutch pilots for their book Missie F-16 (‘F-16 Mission’), which was published in November 2019.

The book is a history of the Dutch use of F-16s in aerial warfare. The authors interviewed pilots who flew during the Cold War; the war in former Yugoslavia; and Operation Enduring Freedom in Afghanistan. Covering more recent conflicts, they also interviewed pilots who were operating in Libya in 2011; and in the US-led Coalition against ISIS.

The book deals surprisingly frankly with pilot concern about civilian harm – and challenges an ongoing insistence on secrecy by the Dutch ministry of defence. Airwars has been speaking with the authors.

Olof van Joolen (a defence reporter) and Silvan Schoonhoven (reporting on terrorism and security services) published their book earlier than scheduled on November 13th 2019, after Dutch media outlets NOS and NRC broke their story about the Netherlands being responsible for at least 70 civilian deaths in Hawijah, Iraq in June 2015.

In response to that investigation, Dutch Minister of Defence Bijleveld also acknowledged responsibility for an airstrike in Mosul on September 20th, 2015, which had led to the deaths of four civilians. The book’s authors had been able to speak with Basim Razzo, who lost his brother, wife, daughter and nephew in the attack – as well as the pilot who had dropped the bomb on the Razzo house. Previously, it had been though that a US aircraft had carried out the attack.

What was it like interviewing Stefan, the pilot who dropped the bomb on the Razzo house?
Schoonhoven: “We realised that he was completely drowning in this story. He was ready to tell us everything – from start to finish. He couldn’t share this with his family. These past weeks have been very tough for him – to see a videotaped interview with Basim Razzo. He had read about him, but not seen his face, let alone see him cry.”

Van Joolen: “He really would have liked to see this handled properly. He feels terrible about it. People expect some master plan from the Ministry of Defence in incidents like this. Trust me, that wasn’t the case.” 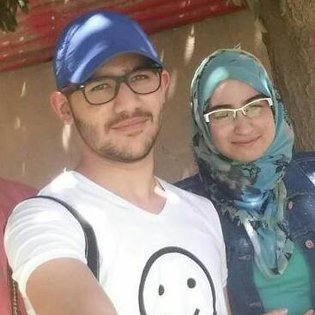 Discrepancy between official and Airwars numbers

“Airwars delivers nonsensical numbers”, claims Scatman. “I don’t believe that the American [military’s lower] numbers are wrong. It just doesn’t work that way. I know exactly where I flew myself and the exact metre where my bomb fell. How do they think it works? That you can secretly make casualties somewhere and then say later: “No, it wasn’t me”? And that you can get away with it?”

[Editor’s note: More than half of all Coalition-confirmed civilian harm events during 2019 were referrals from Airwars, with the alliance itself previously failing to identify  concerns. It is clear that pilots are often unaware of the consequences of their actions.]

This quote seems quite ironic now we know that this is exactly what happened for more than four years with the Hawija case.
Schoonhoven: “His quote is about how he just cannot believe, from his own experiences, that the general Airwars numbers are correct. He thinks that they would have seen if indeed so many civilian casualties had fallen in the more than 2,000 airstrikes that the Netherlands carried out.”

Yet, you did not further dive into that discrepancy between the Airwars numbers and the official Coalition numbers. How did you make sure that this book did not become an uncritical outlet for pilots?
Van Joolen: “I think that is a strange question. If you read the book, that is not the case. We also talked to Bassim Razzo. We wouldn’t have if we just wanted to write a glorious story about pilots. As a journalist, you can conclude that there is an Airwars number and that there is an official number, and you should mention both. We did that.”

Schoonhoven: “And if we were an outlet for the Dutch air forces, we would not even have mentioned Airwars.”

But you did not further dive into possible explanations for this massive difference.
Schoonhoven: “There is a remarkable discrepancy. I cannot explain that. I believe Airwars is a legit organisation, but at the same time, I believe what Scatman says. That it is impossible to throw a bomb and then pretend you did not throw it. It’s always going to come out.” 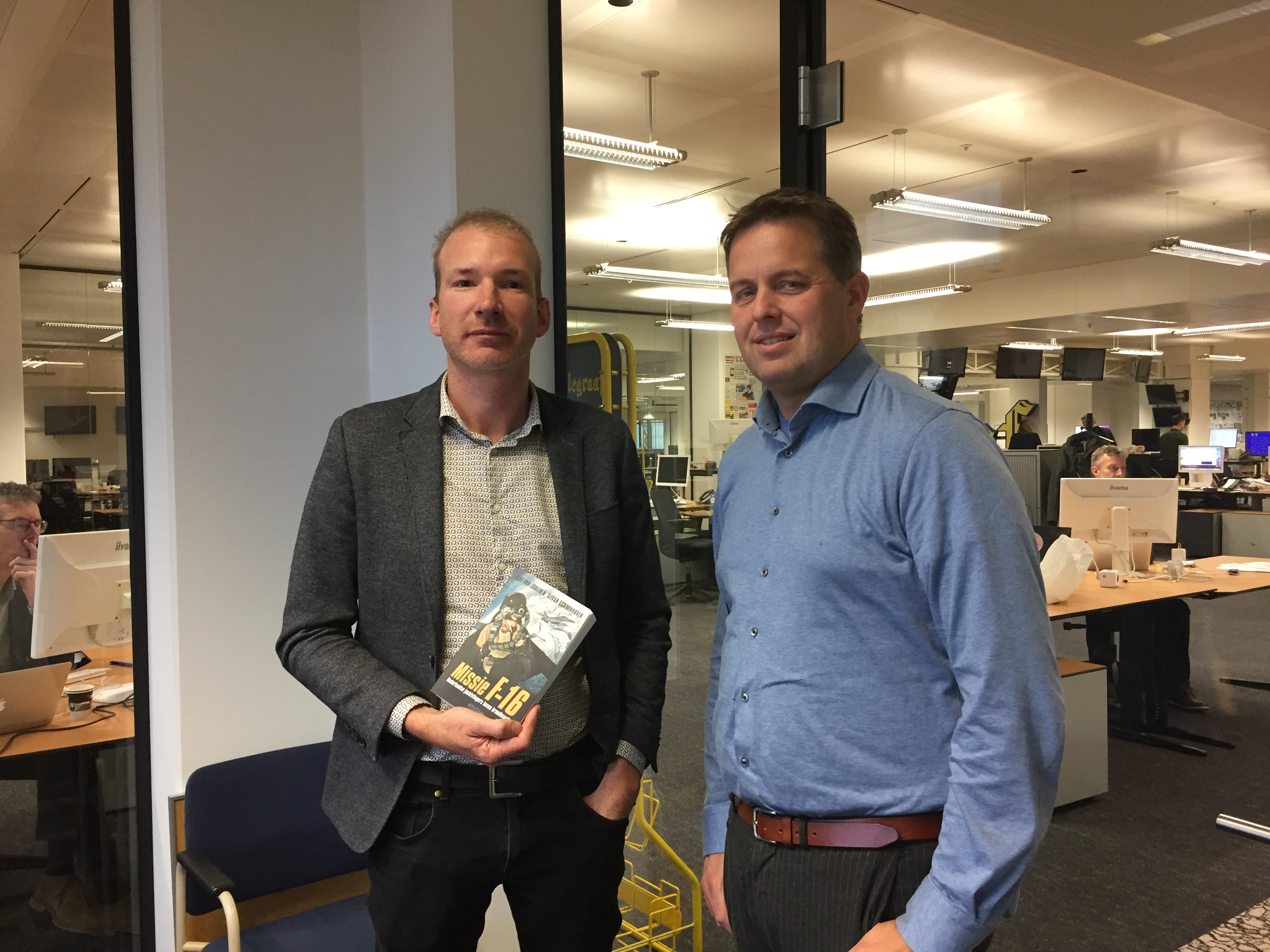 The Ministry of Defence, when asked about their lack of transparency for airstrikes in Syria and Iraq, has continually pointed to the safety of pilots and families. Yet some pilots in your book are mentioned with their full names and even pilots who were active during the fight against ISIS are pictured in their aircraft. How did you experience this safety issue when interviewing pilots themselves?

Van Joolen: “They generally don’t have issues with being photographed. They are not really clearly distinguishable people. Once they put on their jeans rather than their uniform, you couldn’t point them out. They are more worried about their full names being published. Now you might have a photo of Scatman, but it’s not online and very hard to connect to his real name. With a full name, you could find his address.”

“There is a lot of, not sure if it is the right word, trauma among these guys. The death of Jordanian pilot Moaz Al Kasabeh, who was captured by ISIS and burned to death in a cage, really left an impact. We interviewed a Dutch pilot who just spoke to Al Kasabeh on the military base in Jordan before Al Kasabeh went on his final mission. But the real fear among pilots is for their families. Their worst fear is being ‘over there’ and that there is someone back home standing near their wife, mother or children. That is when they feel threatened.”

How did officials react when they heard you were writing a book about this topic, as they have been notoriously secretive?
Van Joolen: “I need to give my compliments to the Dutch air force. Whenever you publish something that involves still active military personnel, they need to approve it. Not at any time during our research have they said that we could not write something down or should change something.”

“However, something interesting occurred during our research. Pilots continuously talked to us about ‘confirmed kills’. They would say something like: “One night I had 50 confirmed kills!” The Brits have been publishing reports of these confirmed kills. So we asked the air force if we could receive a list as well. And then they said: “We do not have such a list.” I don’t believe that. The pilots kept referring to ‘confirmed kills’, but there is no official record of this? And if the Brits can publish such a list, why can’t we?”

Do you think the pilots themselves are receptive towards more transparency?
Van Joolen: “Absolutely, one hundred per cent. In fact, it would help many of them. In the book we write for example write about the case of Uruzgan, Afghanistan. Back home, people thought our men were building schools and wells there, when in fact, they were risking their lives and losing their colleagues. Because it was sold as a “school building mission”. That is breaking soldiers. It is incredibly important for military personnel that people at home know what they were doing, so that when they come back, they can deal with their traumas.”

What then do you think is the main issue with improving transparency?
Van Joolen: “The interesting question is: where is the bottleneck when it comes to transparency in the Netherlands? From all the interviews we have had, I think the issue is with the Department of Defence, rather than in the armed forces. There’s this quote in the book by Johan van Deventer, who is currently acting head of operations. He said: “I handed in a list in my final report as detachment commandant in the fight against ISIS, in which I explicitly stated how many fighters, buildings and vehicles we eliminated.” They did not like that in The Hague. “Did you have to do that,” they told him. Some got angry. That is a very telling quote about the mindset in The Hague.”

“That is one of the points we are trying to make with this book: stop with all the strange secrecy. Admit that if you sent a unit of F-16s, you are sending our most effective weapon to do its job. You should be transparent about that, so that people know what you are doing there. I found it very shocking to hear from military personnel who talked with Members of Parliament how little knowledge MPs had about the reality of war. They really have no idea.”

Postscript: From truth to accountability

In an interview with Dutch newspaper Algemeen Dagblad on January 24th, 2020, Basim Razzo, the survivor of the deadly airstrike on his house in Mosul, stated that he still had not received an apology from the Dutch government, despite the public acknowledgement of Dutch responsibility.

As Mr Razzo noted: “I can’t think of a reason why I haven’t heard from the Dutch government. Out of decency and as a moral act of acknowledging responsibility, I expect them to contact me and do the right thing. I think I am entitled to an official apology and then a real compensation for the loss of four lives and two houses.”

Due to the lack of action on the side of the Dutch state, Razzo is now being supported by human rights lawyer Liesbeth Zegveld, who aims to hold the Dutch government accountable for the loss and damage which Mr Razzo and his family have endured, stating to Algemeen Dagblad that “it’s actually shameful that we are have to follow legal proceedings for that”.

A spokesperson for the Ministry of Defence told Algemeen Dagblad that they did not know why Razzo had not been contacted yet, but that a letter will be send to Parliament shortly outlining possible victim compensation.

The spokesperson also asserted that “the Netherlands is responsible, but not liable. Nevertheless, we want to see what we can do for the communities on a voluntary basis.” That letter to Parliament is expected in mid February 2020, indicating whether the Netherlands is ready not only to acknowledge the truth of its actions, but also to take accountability when strikes go wrong.

▲ LIBRARY: During the war against ISIS, a pilot sits in the cockpit of a Dutch F-16 with a second aircraft in the background (Image via Dutch MoD)